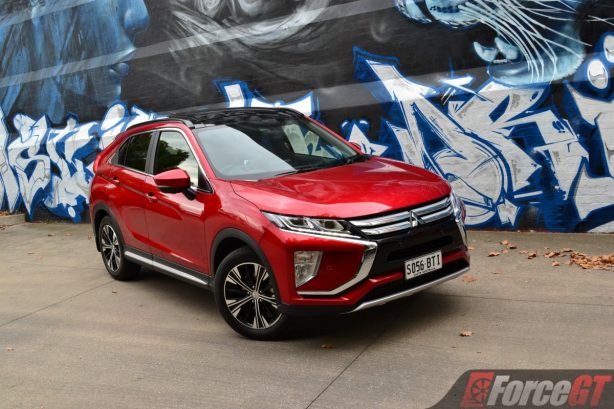 The booming SUV market has allowed car manufacturers to go creative with their offerings, and by that we mean not conforming to the conventional. The coupe-SUV has been a well explored concept, as evident by the arrival of popular models such as the Toyota C-HR and Nissan Juke. A trend that is picking up is the so called segment splitting crossovers which are essentially models straddling a smaller and a larger class in size and price.

The Mitsubishi Eclipse Cross combines both to create a fresh new alternative for those looking for something that sits between a small and a mid-size SUV. That means in Mitsubishi’s own product hierarchy, the Eclipse Cross slots between the smaller ASX and larger Outlander.

In Australia, the two-model range kicks off with the Eclipse Cross LS 2WD from $30,500 plus on-road costs, while the fruitier Eclipse Cross Exceed 2WD comes in at $36,000 plus ORCs. All-wheel-drive – available only on the Exceed – sets you back an extra $2,500, and is what we have on test here. 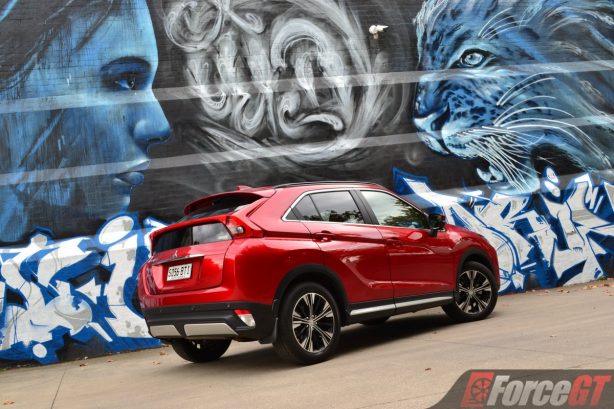 The Eclipse Cross is Mitsubishi’s first all-new model in years and if it’s an indication of what’s to come from the Japanese brand’s future products, it’s off to a good start.

Style is a big factor in this segment’s young buying demographic and the Eclipse Cross packs a good dose of it. The front adopts Mitsubishi’s bold “Dynamic Shield” corporate face that we first saw in the Pajero Sport. Its angular lines and edgy Lexus RX-esque headlights set the tone for the rest of the exterior design, which boasts deep creases and sharp cuts on the back of a sporty coupe-like silhouette. The rear features a distinctive rear spoiler that splits the back window and integrates full-width lighting, in a similar approach to the 2012 Honda Civic hatch. A second roof-mounted spoiler further adds a touch of sportiness and neatly integrates the rear windscreen wiper. Clever detail can also be found in the doors which extend below the sills to help keep your pants or skirt clean on entry and egress. 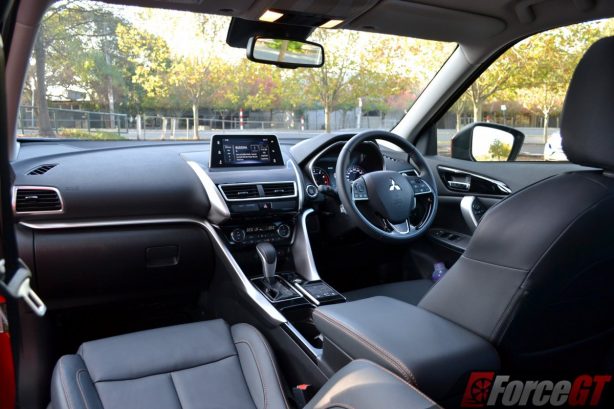 The interior is a major leap forward for the company. Instantly noticeable is the impressive fit and finish. The soft touch surfaces are rich and dark in texture, giving out an air of quality.

The dashboard design is both smart and practical, with a layered layout that borrows slightly from the Lexus NX. There’s even a Lexus-like touchpad in the centre console for operating the 7.0-inch infotainment display, although unlike the luxury brand, touch screen control is also available.

We still prefer Mazda’s rotary type controls but the Mitsubishi’s on-screen icons are larger and better organised. You control the volume by swiping up or down with two fingers while swiping left or right scrolls through the pages.

The Exceed model also comes with a fancy head-up display although it’s projected on a cost-saving flip-up plastic screen rather than the windscreen. It’s a basic system that only displays digital speedo and cruise control information, and nothing else. But that’s the least of your worries as the bigger issue is the size of the screen, which is just too big and sits almost in your line of vision. 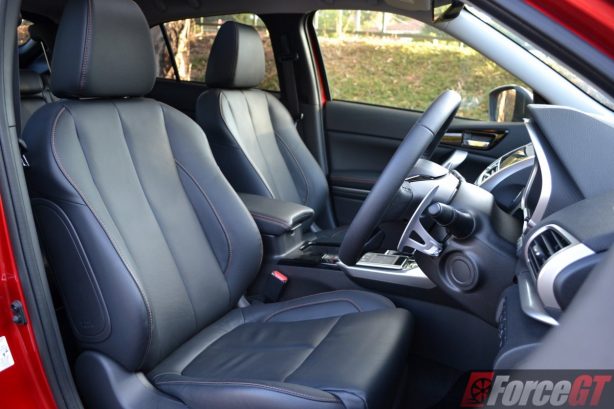 Mitsubishi has stepped up in terms of features and safety too. Our Exceed model came fully loaded with niceties such as dual-zone climate control, electric driver’s seat, a 360o camera, front and rear parking sensors, blind spot monitor, DAB+ and an excellent adaptive cruise control with braking function.

Apple CarPlay and Android Auto have also been incorporated, though disappointingly there is no built-in Sat-Nav, not even in the range-topping Exceed. 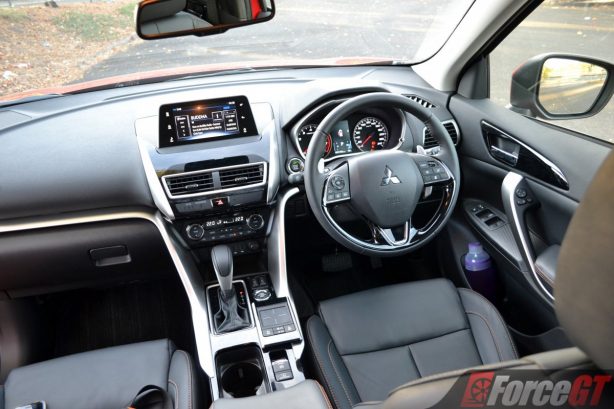 The cabin is one of the more spacious ones in the segment. The front seats are plush and nicely supportive, while the rear pews come accompanied with generous legroom and footroom. Two adults seated in the back will enjoy great comfort, while three will be a bit tight but far from a squeeze.

We’d like to have the extra comfort of directional air con vents in the rear but they are not sorely missed given the car’s powerful air-con.

At 341 litres, the Eclipse’s boot space is 77 litres larger than the Mazda CX-3’s and but trails the Toyota CH-R’s by 36 litres. The 60/40-split rear seats fold almost completely flat to expand on its capacity, though the resulting step at the joint between the boot floor and rear seat back can get in the way when sliding large items across the boot.

One clever feature is the ability to trade boot space with rear passenger legroom. By sliding the rear seats forward or backward, you have 200mm of choice between maximum rear legroom and maximum boot space. 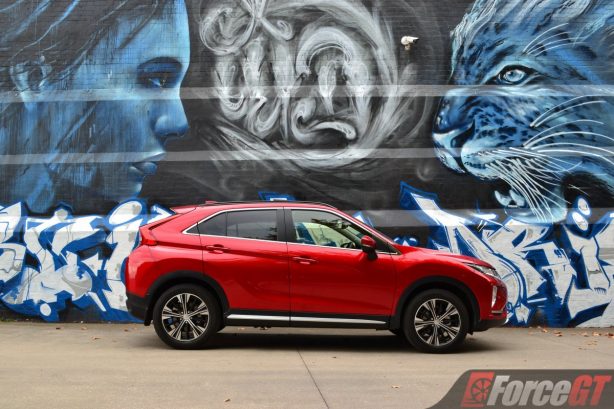 Dual cup holders can be found in the front and behind the middle rear seat back, though we’d hope the former came with a sliding cover, which when the cup holders are not in use, creates a flat place to put your mobile phone as the recessed just fore of the gear lever is too small for anything larger than an iPhone 4.

Our top-spec Exceed model came equipped as standard with dual sunroofs which let in plenty of natural light into the cabin, though only the front half opens. Both sunroofs have individual power operated shades that block 100 percent of light when shut. It’s also worth noting that the outward opening front sunroof doesn’t get in the way of headroom at all.

Other than slight wind noise around the rather bulky side mirrors, the Eclipse Cross is generally quiet at speeds with road noise well suppressed. We did, however, notice some rattling in the rear seat head rests. 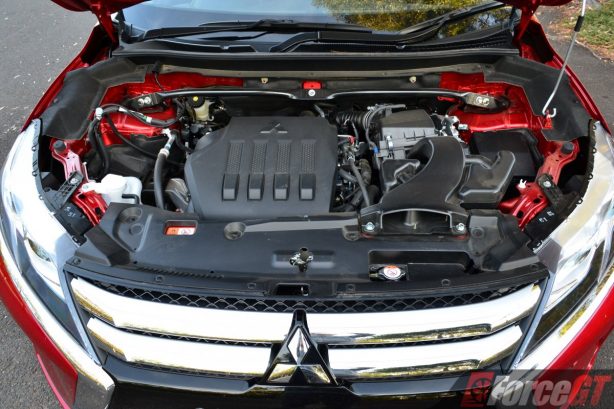 The Eclipse Cross’ all-new 1.5-litre turbocharged four-cylinder petrol engine is a sweet little unit. Putting out 110kW of power and 250Nm of torque from 2000 – 3500rpm, it’s willing and responsive off the mark, yet refined and muted on cruise.

We had the opportunity to push the small engine to its upper limits when we packed up some friends and headed to Victoria’s wine region for a weekend escape. With five averaged sized adults on board, plus a boot full of luggage, the Eclipse Cross brought us to our destination without breaking a sweat.

It’s an impressive drive for a small SUV and although you get the occasional revs flare from the continuously variable transmission (CVT) under a heavy throttle, it doesn’t really take much away from the driving experience. 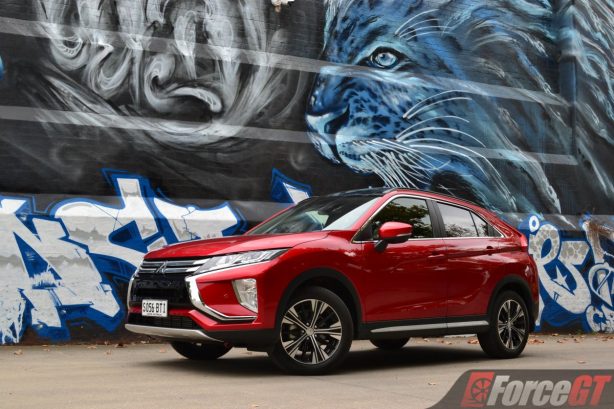 The car’s all-wheel drive shows why Mitsubishi’s Super All-Wheel Control (S-AWC) torque delivery system is still one of the best in the business. It just grips and grips and grips, which in wet weather condition, translates to secured and safe handling.

Body roll in the Mitsubishi is more evident than in something like a Toyota C-HR or Mazda CX-3, but it still tracks tidily and faithfully thanks to the superb AWD traction.

The steering has appropriate weighting but lacking in any desirable feedback. The brakes, on the other hand, stops confidently with consistent brake pedal feel and little tyre screech.

At the end of our week long test, the Eclipse Cross returned an average fuel consumption of 8.1L/100km, which is a respectable figure against the rated 7.7L/100km.

Another area that Mitsubishi tends to excel in is long term running costs. The Eclipse Cross only needs to visit the dealer once every 12 months or 15,000km, with costs ranging from $300 for the first service, and $400 for subsequent ones.

Buyers are demanding more and more from their compact SUV – it needs to look good, drive well, offer plenty of space and last but not least, pack the latest technology. The Mitsubishi Eclipse Cross may not have everything to keep everyone happy, but it surely is pretty close to achieving that.

At last, a very compelling package from Mitsubishi after a lengthy period of stalled progress.

The next-generation Mitsubishi Outlander is slated to arrive in February 2021, bringing not just host …