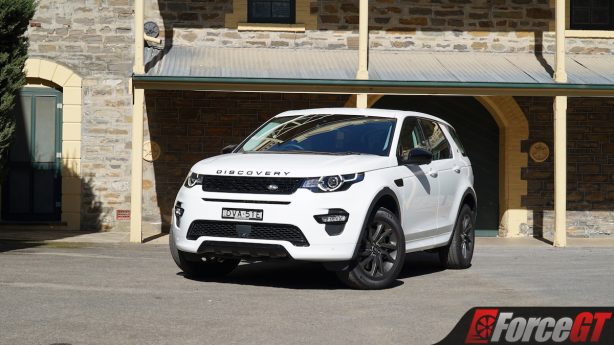 The Land Rover Discovery Sport is one of the many long-enduring models in the lineup of Land Rover vehicles, although you wouldn’t know it was starting to get on in years from its looks alone.

Just think about it for a second – sure, we saw the new full-size Discovery launch mid-last year, while the stunning Range Rover Velar was a new addition for 2018, but the rest of the lineup has been around for donkey’s years by modern standards.

The Range Rover Evoque, for instance, has been around since 2011. The current proper Range Rover, meanwhile, launched just a year later, with the Range Rover Sport following it in 2014. 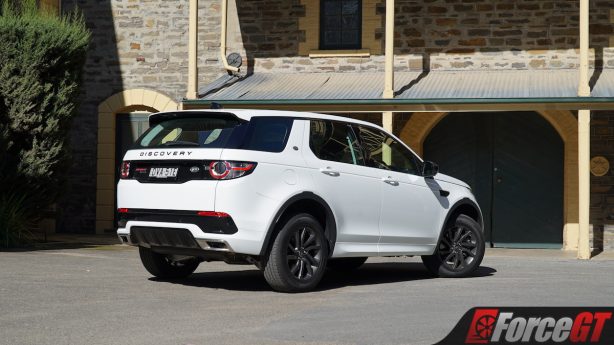 And then there’s the Discovery Sport which we have here. First launched overseas in 2014 and locally a year later as a replacement for the Freelander, the baby Disco has been given a little bit of a spruce-up for 2018 to try and keep it feeling fresh.

So, to see whether these changes will help it forge on for another few years, we grabbed the keys to a mid-tier HSE model with the new SD4 diesel engine and set out to put it through its paces. 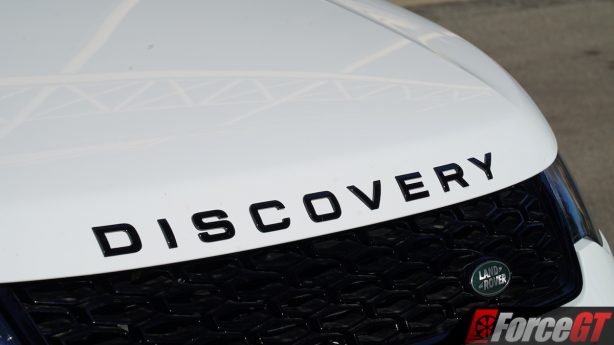 Personally, I’m a very big fan of the Discovery Sport’s looks. With its rounded and imposing nose and that distinctly cool split C-pillar, it really does look like a miniature version of the new Discovery 5. Or rather, the big Disco looks like it, considering the Sport predates it by three whole years.

Thankfully, the wonky tailgate design of the Discovery isn’t something shared by the Sport, which goes for a more conventional design at the rear. 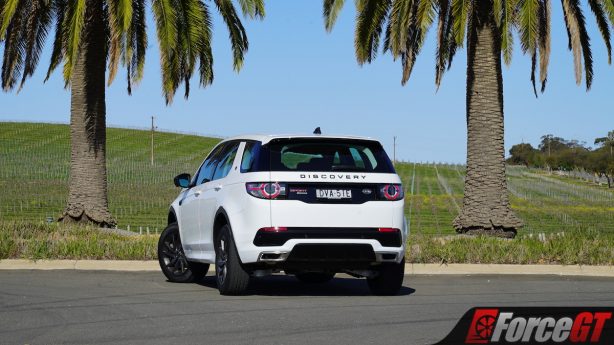 I also like the look of the pedestrian airbag cover at the back of the bonnet, which is finished in contrasting piano black plastic, as it adds a subtle and unique touch while also being very functional.

It’s also a design that, I must admit, hasn’t really aged a day in my eyes. It still looks just as fresh as it did when it first debuted, so kudos to Land Rover for providing this – and the rest of its range – with such timeless styling.

Do keep in mind, though, that our tester had the optional dynamic exterior – a very attractive but very expensive option at $4,180. 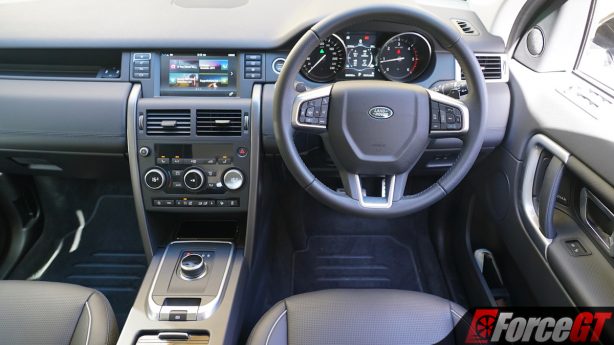 Unfortunately, it’s on the inside where the Discovery Sport begins to show its age, as it simply feels a generation behind the rest of the JLR lineup. In particular, it’s the horrible infotainment system that really lets it down, as the screen isn’t the most amazing quality, it’s slow to react, lacks digital radio, and uses the older navigation system too.

It’s an interior that is also largely reliant on harsher plastics for the majority of its composition, which wouldn’t be an issue if it was priced lower than it is, but it’s slightly below the quality level you’d expect from something in this price bracket.

But don’t think for a second that it’s all bad on the inside though. Au contraire, there’s still plenty of things to praise, particularly the quality of the leather. While only the seats and steering wheel are clad in it, they are two of the most important contact points in the car, and the leather both are wrapped in feels absolutely top-notch.

Speaking of the seats, they are incredibly comfortable all around with twelve-way power adjustment, heating and ventilation, and three memory positions for both front seats, along with plenty of legroom and well-cushioned armrests all around. 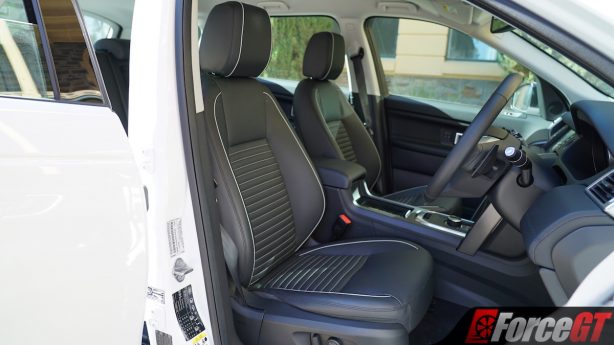 While there may not be any admittedly unnecessary leather on the door cards or in places like that, there is a strange rubber-like soft-touch material there instead, which has just the right amount of give to lift the cabin comfort that little bit further.

And although I might complain about the abundance of plastics, this is a car designed with light off-roading in mind, so in that sense, the choice of materials does make sense when you consider it makes the interior easier to clean after you’ve had you and your family’s muddy boots in it.

It’ll easily haul the whole family’s gear as well, with a sizeable 981 litre boot with the second row seats in place. A powered tailgate is included as standard, while, rather cleverly, there are adjustable shopping bag hooks that can be clipped in anywhere along the side of the boot.

Also, it’s worth noting that while our tester was a five-seat model, the Discovery Sport can be had with seven seats, although the full-size Disco would almost certainly be a better option as a seven-seater. 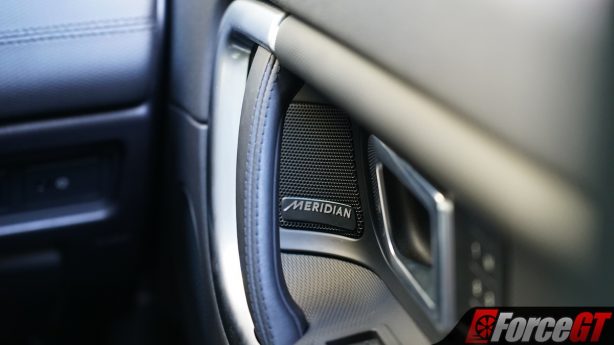 The SD4 drivetrain in our tester utilises a twin-turbocharged version of the 2.0-litre diesel that produces a healthy 177kW and 500Nm, which is coupled to a nine-speed automatic transmission and a front-biased part-time all-wheel drive system. 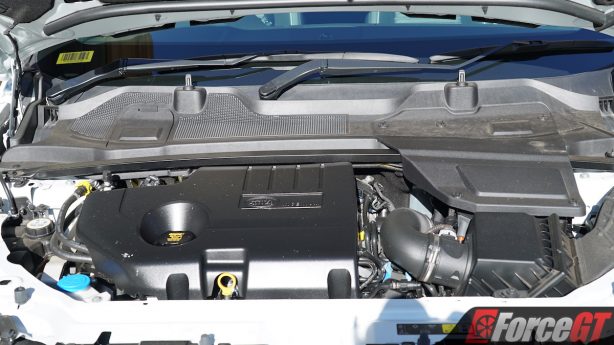 This engine is a little clattery on idle but on the move it is very smooth and does quieten down a lot, while it also delivers effortless acceleration at almost any speed.

Also available are two less-powerful single-turbo versions of this diesel engine, along with a 2.0-litre Ingenium turbo petrol engine available in two states of tune as well. 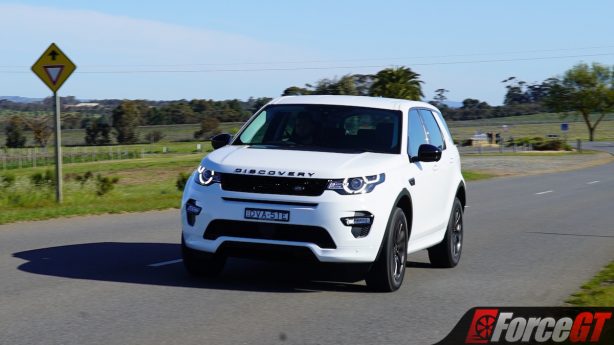 The Discovery Sport coming across as a miniature version of its big brother isn’t just in how it looks but in the way it drives as well. Plush, comfortable, and quiet are the first words that come to mind when describing the way the baby Disco drives, and you’d be thinking exactly the same driving the big Discovery 5.

It’s a car in which you can chew up the miles without thought, which I know because I put over 1200km on the clock over the course of just over a week showing it all around South Australia, including a longer trip out to Seppeltsfield for our photo shoot and a 400km round trip to the Coorong over a long weekend. 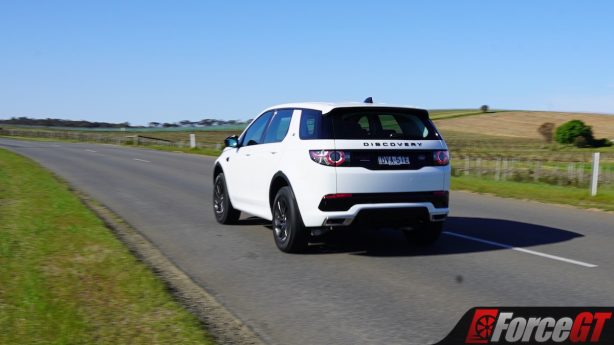 On the open road, the cabin remains almost whisper quiet, with only the worst coarse-chip roads able to elicit any tyre roar and very little wind noise to be detected either. The suspension is tuned incredibly well, too – it’s soft enough to iron out sickeningly undulating country roads, but not so soft that there’s any notable amounts of body roll through the corners or a disconnected feel from the road.

That means that while it’s day job may be as a long-distance cruiser – or a comfortable city-dwelling runabout due to its relatively compact size – it does moonlight from time-to-time as a bit of a backroad blast.

Through the corners it handles with confidence, maintaining good grip and putting the power down from the twin-turbo diesel donk without any drama on the exit. The nine-speed transmission remains well-behaved too, shifting predictably when left to its own devices, while being responsive enough when shifting gears yourself using the illuminated flappy paddles on the back of the steering wheel.

It’s certainly not perfect, as the steering, while well-weighted, isn’t particularly communicative, and the torque vectoring by braking system can be a bit harsh when braking the inside wheel through tighter corners, but for something biased more towards light off-roading than performance driving, it does an admirably good job and is still a lot more fun than you’d expect. 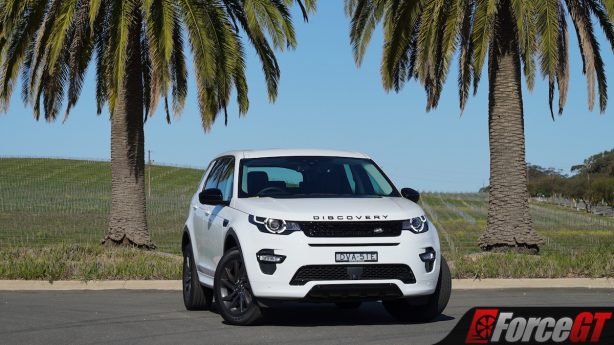 The Discovery Sport might be showing its age on the inside, but it still looks as fresh as a summer’s morning on the outside, and it really stands out among the rest of the SUV crowd.

It’s also very nice to drive, with it delivering a smooth ride and effortless acceleration with the new SD4 twin-turbo diesel engine.

If it was priced a bit lower, and if the options to dress it up didn’t make for such a dramatic price hike, it would be a very good buy and easy to recommend, but it is definitely still worth consideration if you’re after a more premium SUV that’s great in the city, on the open road, or even in the bush.