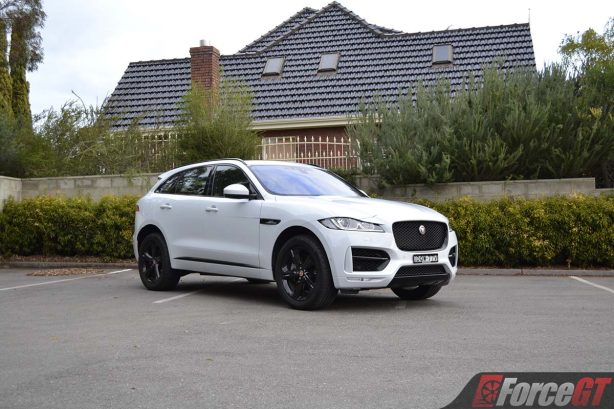 It’s been nearly two years since Jaguar’s first-ever SUV burst onto the scene and cements itself as the brand’s best-selling model thanks to its attractive styling and car-aping dynamics.

But not one to rest on its laurels, Jaguar has made running changes to the F-Pace for the 2018 model year, including broadening its appeal with the new 184kW 2.0-litre four-cylinder Ingenium petrol engine badged as the 25T. 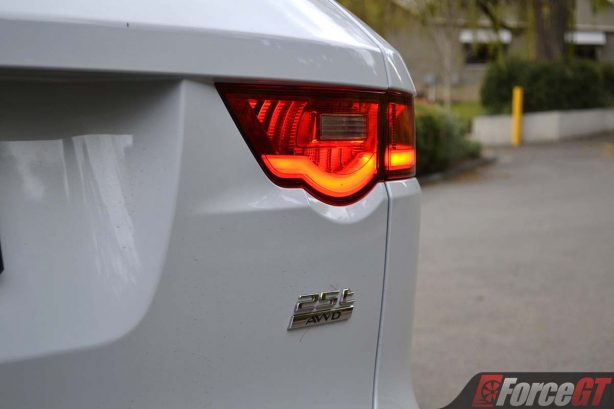 Jaguar has always pride itself for building some of the best sports sedans and the F-Pace inherits some of that trait for those wanting their SUV to be more than just a practical family hauler.

It’s not an off-roader per se (although the All Surface Progress Control does get it out of some tricky situations easily), as it is based on the aluminium intensive architecture of the Jaguar XE and XF sedans. The result is impressively car-like dynamics and driving position.

While the F-Pace 25T comes standard with all-wheel drive, it isn’t a full-time system, only sending up to 50 per cent of the power to the front tyres when they’re scrabbling for grip.

This is a stylish SUV with a dynamic and performance edge.

Prices for the one up from entry-level F-Pace 25t start from $73,252 but the R-Sport tested here comes with an $81,787 sticker – all before on-road costs and any optional extras which is extensive.

You do get a fair bit of kit to start with though, with 19-inch alloy wheels, bi-xenon headlights with LED daytime running lights, and R-Sport bodykit with unique bumpers and Satin Chrome side power vents with R-Sport badge. 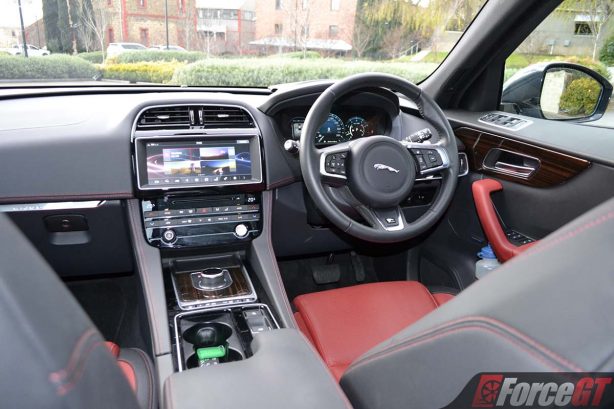 JLR also likes to equip their test vehicles with plenty of toys, including an upgraded Touch Pro Navigation with 10.2” touchscreen bundled with a 12.3” HD Virtual Instrument Display and 825W 11-speakers Meridian Surround Sound System for $5,280, head-up display pack for $2,650, Black R-Sport Pack for $1,430 and 20” gloss black alloy wheels for $1,790 to name a few. 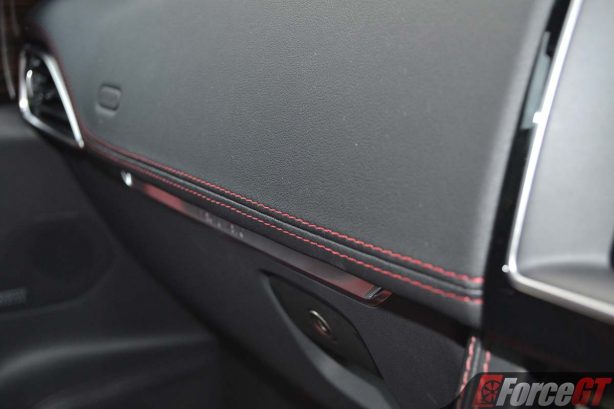 Jaguar seemed to have shaked its unenviable reputation for dodgy built-quality. Our test car with nearly 4,000km on the clock – well used by unsympathetic motoring journalists – shows no signs of annoying creaks or rattle.

High quality materials abound inside and add to the SUV’s premium feel, from the soft padded rubber on the dash and door cards, to the sumptuously inviting red leather on the seats; it feels expensive.

All exterior panels are well aligned although panel gaps are still slightly larger than its German and Japanese counterparts.

Being one of the larger SUVs in its class, the F-Pace fulfils its brief as a practical family wagon.

It’s easy to get in and out of the car without requiring side steps or long limps. Once inside, the vast cabin has plenty of room for five average sized adults with good head and legroom. 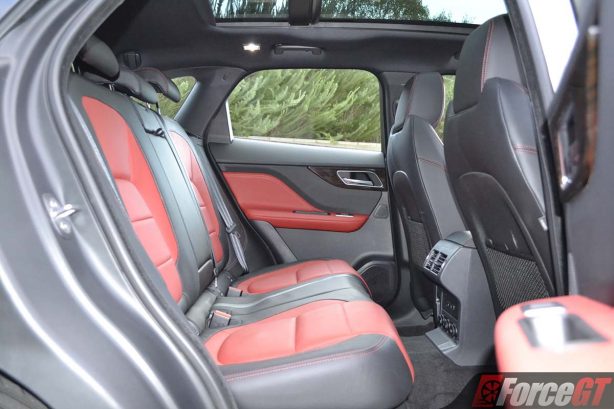 Ergonomics are generally good, with things where you expect them to be with the exception of the high-mounted window switches. In their place to trick you are the buttons for the memory seats.

Occupants’ needs are well catered for too, with power sockets, big door bins, and good-sized twin cupholders and smartphone pockets at the front.

There is 508 litres of boot space behind the large and wide opening tailgate, expandable to a generous 1,740 litres when the 40:20:40 split backrests are tumbled forward. There is also a reversible boot floor that is carpeted on one side and rubberised on the other for transporting pets or sports equipment.

The new 2.0-litre turbocharged four-cylinder Ingenium petrol engine produces a gutsy 184kW of power and 365Nm of torque and matches well with the R-Sport’s athletic personality.

It’s quick off the mark and feels strong almost throughout the rev range, driving all four wheels via a ZF 8-speed automatic transmission that is smooth and quick shifting. There’s also a set of satin chrome gearshift paddles for those wanting a bit more direct control although the gearbox works well when left to its own devices. 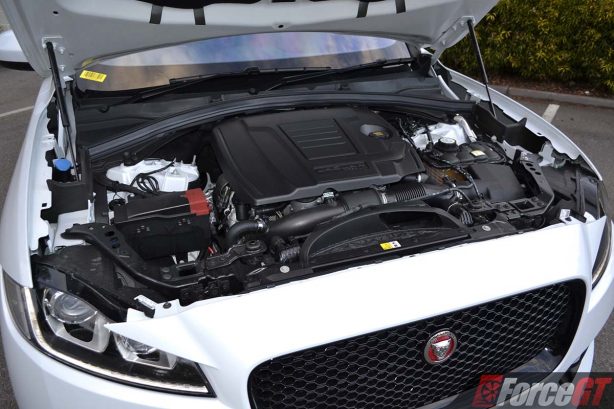 It’s hushed, too, with the engine relatively muted around town and on the freeway. Give it the boot and you get a rorty engine note that feels more at home in a hot hatch than a luxury SUV.

Equipped with engine stop/start tech (although like the V6 Velar we tested earlier this year, it did not kick in on test), the engine returned 10.5L/100km in average consumption on test, with around 75 per cent of the time spent in urban traffic.

As mentioned earlier, thanks to its car-based platform, the F-Pace possesses car-like handling. It has good weight distribution and engaging rear-bias dynamics.

Together with Jaguar’s Configurable Dynamics (that adjusts the throttle, steering and gearshift response) and torque vectoring by braking, the F-Pace more agile and responsive than a car of its size deserves to be. 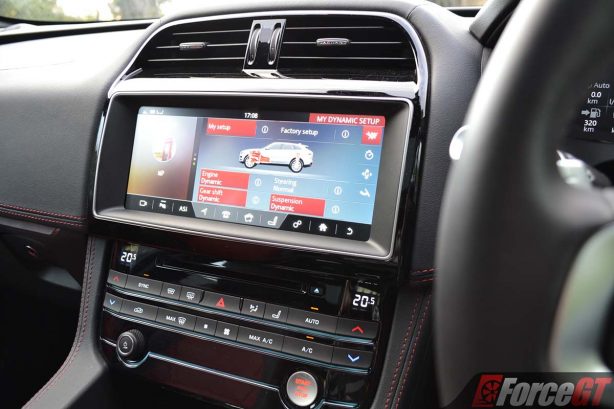 Its telepathic steering constantly conveys useful information on what the front wheels are doing, making it easy to place the big Jag on the road. Stopping performance is good, too, with excellent pedal feel.

Our test car is also equipped with the Adaptive Dynamic Pack which brings adaptive dampers that ensure the car’s personality changes according to your mood, while making ride more compliant on our pothole infested inner city roads – a well worth option.

The Jaguar F-Pace is still one of my favourite SUVs and new 184kW Ingenium petrol makes the 25t the sweet spot of the range.

Together with the R-Sport’s more athletic setup and must have Adaptive Dynamic Pack, the F-Pace is a practical SUV for keen drivers.