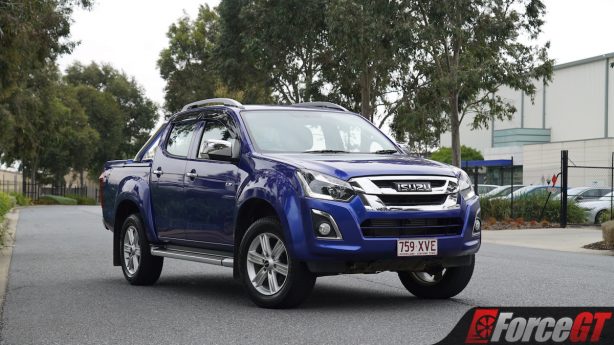 The Isuzu D-Max has always been a formidable contender in the dual-cab ute space, with Australia being Isuzu’s number one export market. But while it’s always sold well, it’s never quite been able to match the numbers of the household-name Toyota Hilux and Ford Ranger, both of which, along with many other competitors, have offered higher levels of specification and been more refined.

That’s why Isuzu has added the LS-T grade – which was previously only a special edition – as a permanent flagship to the D-Max range, along with adding a few more creature comforts and refined suspension, to give the D-Max the swagger it needs to compete with the flashier dual-cab offerings many Aussie buyers are now favouring.

So to see if it really can go toe-to-toe with the best of them, we spent a couple of weeks with an optioned-up 2018 D-Max in range-topping LS-T guise to find out. 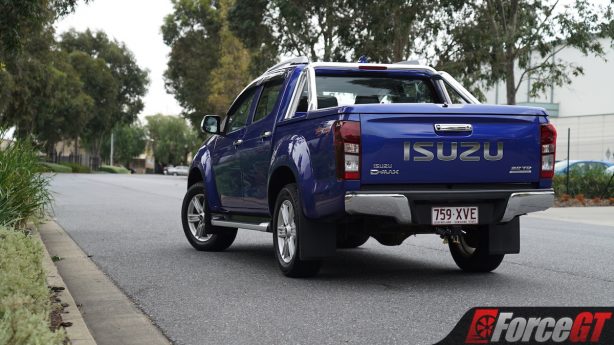 Looks-wise, the D-Max has remained largely unchanged since 2013, but its looks still hold up in my opinion. With aggressive front-end styling, a side profile very similar to the related Holden Colorado, and large Isuzu branding on the tailgate, it’s got just enough going on to keep it still looking interesting after five years despite only minor changes and additions.

Three new paint options have been added for 2018 – Magnetic Red Mica, Graphite Grey Metallic, and Cobalt Blue Mica which you see on our tester here – to help freshen the D-Max’s looks without really needing to change anything else. 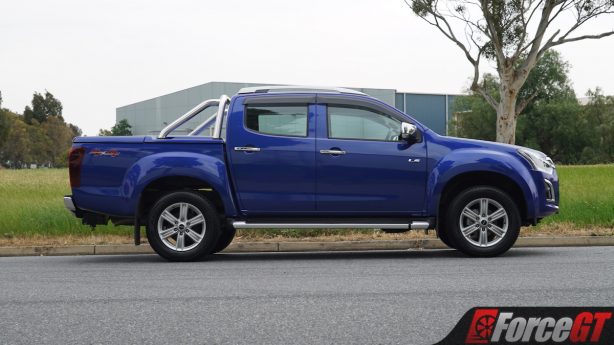 Otherwise, the new LS-T receives 18-inch alloy wheels clad in Toyo highway-terrain tyres and roof rails to dress the outside up, along with a chrome grille and rear bumper unlike the matte finished ones of fleet-focussed variants.

However, our tester was adorned with countless options from Isuzu’s extensive factory accessories list to lift its looks even further, including a three-piece tonneau cover, chrome sports bar, and slimline weathershields which, while driving up the price, did enhance its looks further. 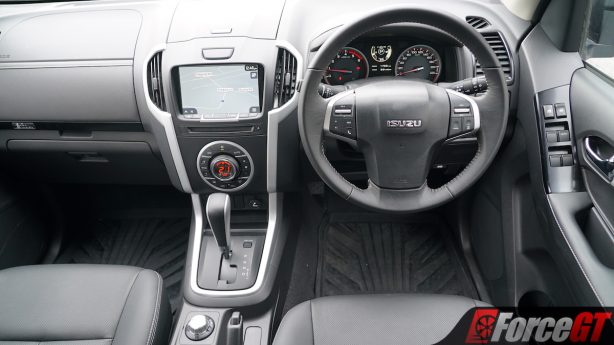 Step into the D-Max and the first thing you’ll notice is that it is a bit, well, basic on the inside. The dashboard appears to be a bit bare at first, with the eight-inch touchscreen and lots of large and expected buttons appearing to be all you have to play with.

But the magic of the D-Max’s interior is the sheer practicality of it, with no need to look further than the dash for proof of that. Take the large dual gloveboxes, for instance, along with another storage compartment on the top of the dash – which is, admittedly, a bit fiddly to open. 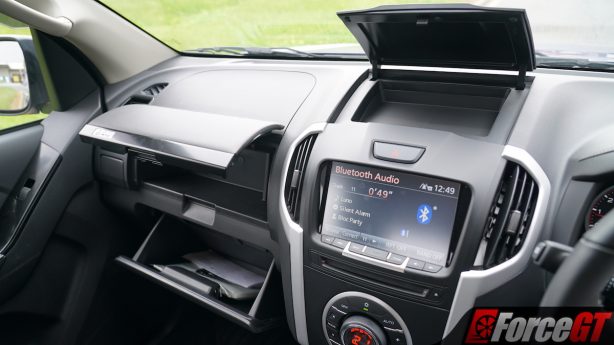 There’s also a tray underneath the steering column which is rather brilliant use of a normally unutilised space, along with a fold-out cubby hole next to it. The cherry on top, however, is the retractable cupholders that can also be used as extra storage trays.

The gauge cluster is uncomplicated and features all the information you’d need too, including a digital gauge to show the level of the Diesel Particulate Diffuser and when it is regenerating which is handy, although a digital speedometer is an unfortunate and sadly common omission. 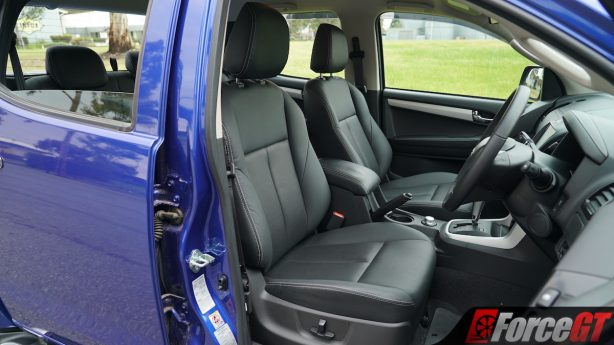 All of the interior materials are of an expected quality, with hard-wearing plastics comprising the majority of the interior, although the leather upholstery of the LS-T is a particularly nice touch. It also sports carpet flooring – something normally not noteworthy, but the entry-level LS-M dual-cab offers rubber flooring instead.

Under the bonnet of the D-Max, you’ll find a 3.0-litre four-cylinder turbo diesel that churns out 130kW and 430Nm – outputs that are both middle of the road. In the LS-T, it’s backed exclusively by an Aisin six-speed automatic, while lesser models can also be had with a six-speed manual. We expect the majority of buyers will opt for the part-time selectable four-wheel drive system fitted to our tester, although it can be had with rear-wheel drive only. 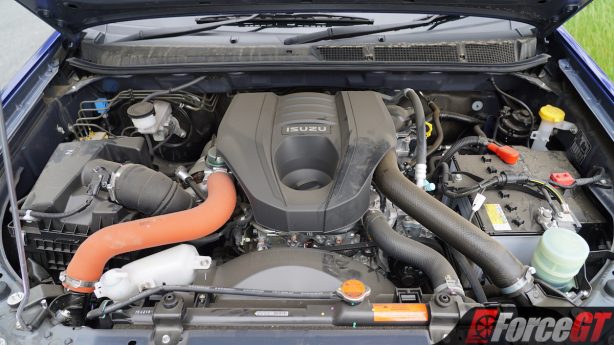 Unfortunately, no D-Max variant is available with a locking rear differential – something that would certainly come in handy for more intense off-road driving, although it’d rarely be required during the normal tasks you’d be putting it through.

The most notable change under the skin for 2018, however, is the revised leaf spring setup for the rear suspension. While previously, the D-Max used five leaves for each side, the count there is now down to three to reduce the rear suspension stiffness in order to improve ride comfort. However, the three leaves now used are thicker than before, meaning its impressive 1,024kg payload remains unchanged. 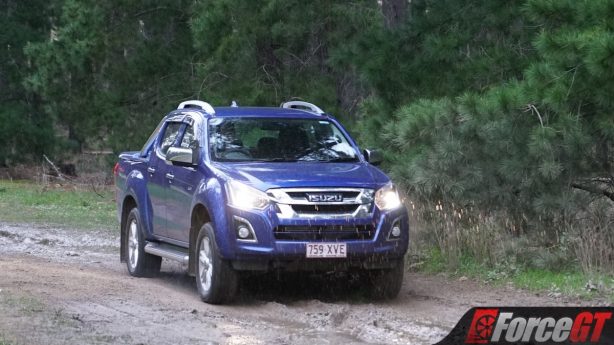 The biggest change to the D-Max’s driving experience comes from that revised rear suspension, which is easily the biggest highlight of the 2018 upgrades as the previously incredibly firm rear suspension was crying out for some revision.

While the rear end of the D-Max used to be incredibly bumpy and hard-riding with the old five-leaf springs when unladen, with the effects of this being most prominently detectable for rear-seat passengers, the three-leaf setup might not make it quite as comfortable as something like the coil-sprung Nissan Navara, but it’s certainly at a similar level of comfort as the better-riding leaf-sprung utes in class.

That’s not to say it isn’t still a tad bouncy when unladen, as it certainly is, but it is a massive improvement as the ride is no longer as tiresome on longer drives on poor-quality country roads.

The slight level of firmness does at least help with keeping the handling in check, as it remains very flat through the bends while the hydraulic power steering is pleasantly communicative as to where you’re placing the wheels. 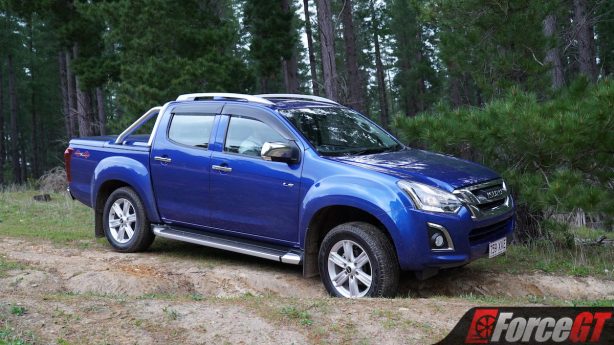 Otherwise, all is the same as it has been previously. The big diesel donk under the bonnet – which has been adapted from Isuzu’s N-series trucks and is one of the few 3.0-litre units left out there, with most manufacturers opting for smaller engines – while far from the most powerful in class, it never feels stressed or strained. It’s been famed for its reliability too, which will be particularly attractive to fleet buyers and those planning on piling on the miles.

The six-speed automatic transmission – which was added in 2017 as an upgrade from the old five-speed unit – is particularly smooth with evenly spaced gears and a lock-up torque converter for gears three through six to improve drivability.

My only real drivetrain-related complaint is the utterly horrendous amount of engine noise from the gruff truck engine. While it does quieten down when you’re cruising along, it sounds as though there’s a death metal gig under the bonnet at which all the amps have been turned up to eleven under harder acceleration, and while few utes out there are powered by quiet oilers, this one is certainly one of the loudest which is something to keep in mind. 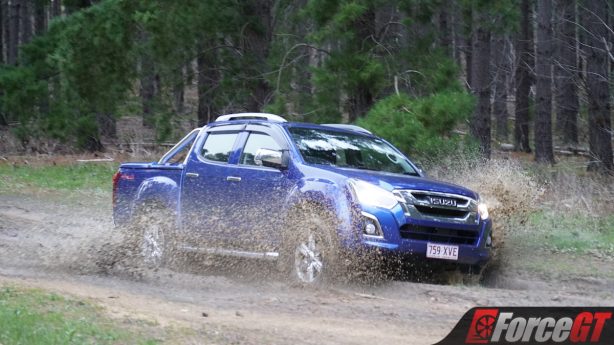 With a simple and straightforward shift-on-the-fly four-wheel drive system that also offers low-range gearing, the D-Max is certainly able to deal with most of the off-roading you’ll ever throw at it.

On our usual testing trails around the Adelaide Hills, we found the D-Max never seemed to struggle too much, although we did encounter a couple of situations where a locking rear differential would have made progress just a bit easier. Even then, we still weren’t able to truly thwart it.

The new rear suspension provides a surprisingly impressive amount of articulation and travel, which was key to helping us manage without the diff lock as it managed to keep all four wheels grounded almost all of the time.

We also found the improved ride to hold up well on the rough stuff too, although it did skip a little over bigger dips and potholes as is to be expected. 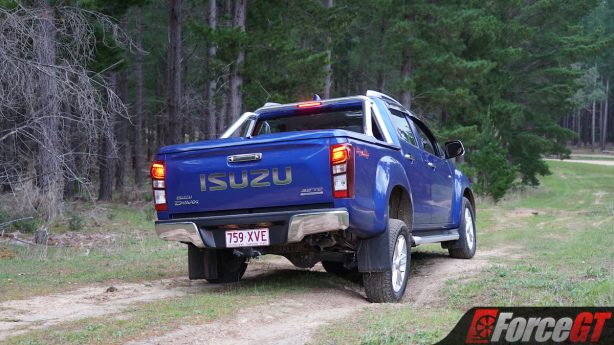 Additionally, the mileage cap for Isuzu’s 12 month servicing intervals have now, thankfully, been increased from 12,500km to 15,000km.

As for fuel consumption, we calculated that the D-Max used 9.9L/100km when we brimmed the tank after the first 500km we spent in it, which consisted of a mix of country, city, off-road, and spirited driving. While a bit over the claimed average of 7.9L/100km, it was only a couple of decimals above what the trip computer claimed we’d been using.

Our next 700km in the D-Max consisted of mostly country driving, which saw the trip computer’s claims dip down about a litre, from which we estimate you should be able to get around 850km from the 76 litre tank under ideal real-world conditions.

It’s also worth noting the price to buy the D-Max at this point, as while the four-wheel drive LS-T tested here is listed at $54,700 before options – with ours worth over sixty grand – no one will ever pay that amount for it, as one look on the Isuzu website gives you drive-away deals starting from $50,990 for this variant. 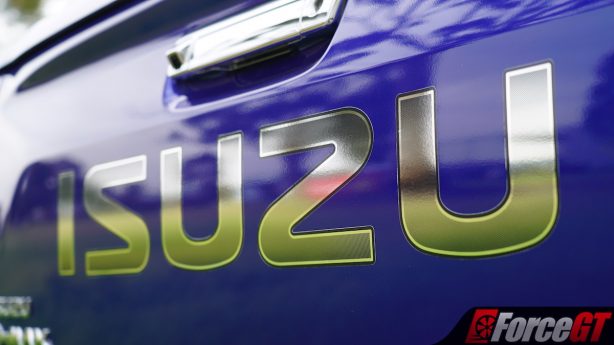 While the D-Max might be a bit basic as far as technology and niceties are concerned, it makes up for it with rugged toughness and reliability, which is what’s continued to win it buyers over the past five years.

With the minor upgrades that have come with this 2018 update, the D-Max can now compete more confidently against the flashy and highly-specified utes that many Aussie buyers are flocking towards.

Haggle for a good deal, which you should be able to do without much difficulty, and the D-Max is a solid buy for those wanting a vehicle that can rough it at work and still keep you entertained on weekend adventures.