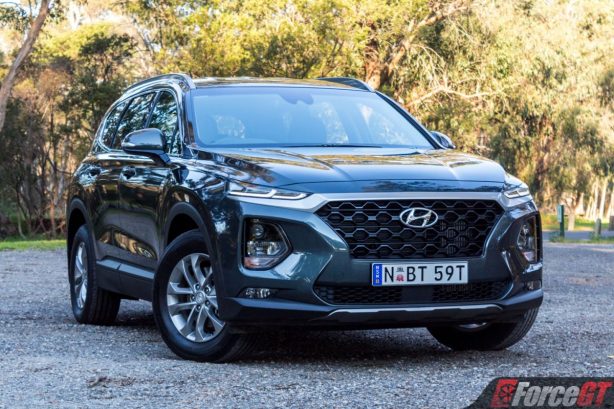 If the situation calls for more than 5 seats there’s the classic dilemma of the humble people mover or the more exciting 7 seater SUV. Hyundai’s Santa Fe has been filling the 7 seater space for well over a decade now while with rivals beginning to crowd the market after introducing their own 7 seater offerings. With the keys to an entry-level Santa Fe Active Diesel for a week I managed to load up the seats with whoever I could coerce and see how it stands out from the competition. 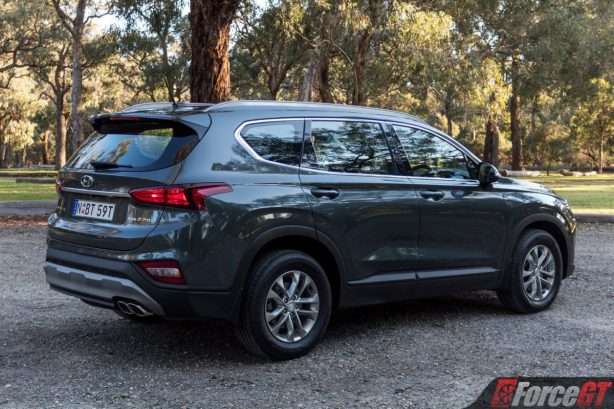 As a big fan of the Hyundai Kona’s design style I was excited to see it applied to the bigger more capable Santa Fe and the end result is spectacular. The front end features aggressively slim daytime driving lights with the headlights located lower down and less likely to blind those in front as per its smaller sibling.

Body lines contour their way from the driving lights running the length of the car trailing their way into the rear tail lights which wouldn’t look out of place even on something with a luxury badge. There’s no question about it, the Santa Fe is a good looking SUV all round. 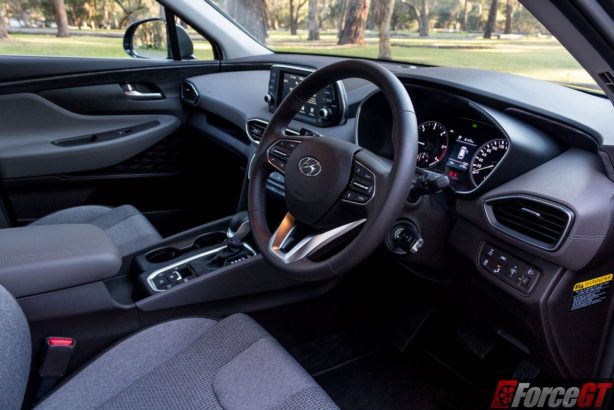 In the not too distant past there have been many cases of Korean cars delivering a stylish looks outside while making a mess of the inside and I’m glad to say that the Santa Fe’s beauty isn’t just skin deep.

For a base spec model it sure borrows a lot from its classed up siblings, there’s double stitched leather lining the dashboard, door trims, centre glovebox lid and even to the sides of the centre console trim. Don’t think you can write off the seats because they’re fabric rather than leather, the material both looks and feels wonderful while offering ample support with those grippy side bolsters. Stone effect inserts with a deep polygon texture adorn the door trims and dashboard giving the Santa Fe’s interior a far more upscale feel than you’d expect for the $46,000 asking price.

All three mid row seats are usable with extra leg room provided due to the lack of a driveshaft bulge even though our Santa Fe came all-wheel drive equipped. Keeping all manner of digital devices charged falls to the twin USB charging ports which are joined by a small storage pocket and aircon vents on the back of the centre console.

Up to two baby or child booster seats can be affixed to middle row where both outer seats come with ISOFIX child restraint anchors making the Santa Fe a solid contender for young families. 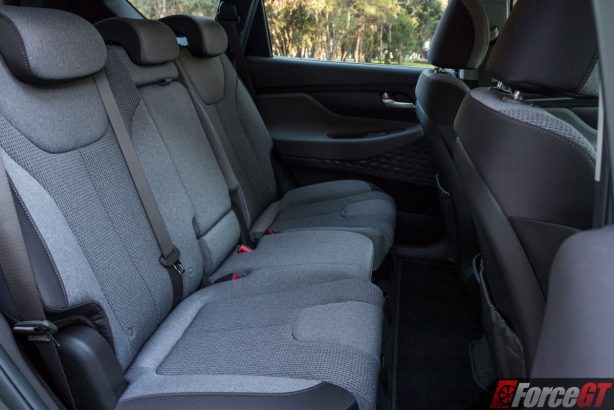 Kerb side parking dictates that getting into the third row is best done from the passenger side and at the touch of a button the mid row seat will both drop down and slide forward letting you step right in. Things do get somewhat cramped in the rear if the mid row seats are reclined and pushed all the way back, they’re still usable for children but adults will be begging for them to be slid forward sharing the available room.

In Active guise, the Santa Fe makes the most of the manual air conditioning by providing an extra set of vents for the third row with adjustable fan speed, though for some reason the vent settings always reset after turning the car off which proved a minor annoyance over time. 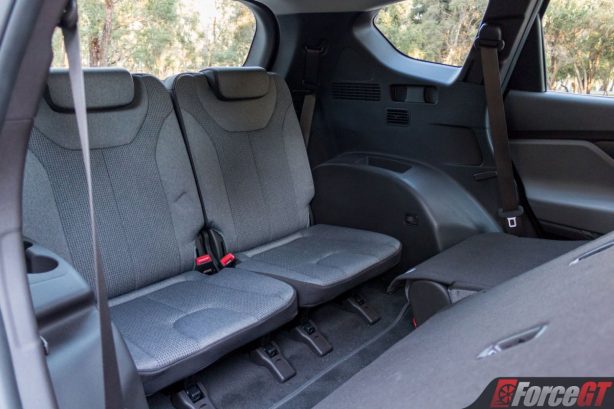 Dropping the rear seats down opens up a substantial 547 litres of boot space with a completely flat floor and a maximum of 1625 litres after collapsing the mid row using the rear located set of buttons. There’s a 12V socket tucked away back there and hidden under the car lies the full size alloy wheel. Privacy for your cargo comes courtesy of the rear cargo cover which easily slips out from its dock leaving you to realise that there’s no elegant way of storing it onboard. 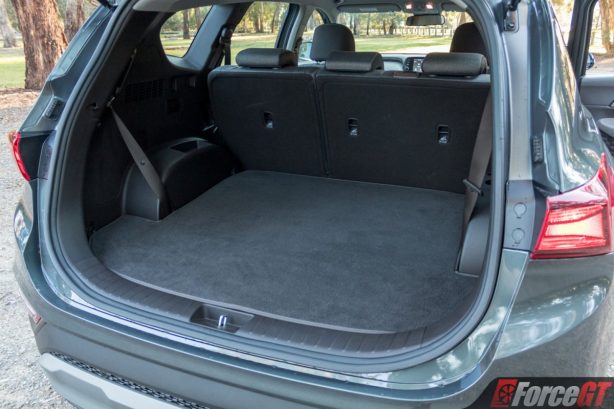 From a standing start the Santa Fe’s 2.2-litre turbocharged diesel 4-cylinder engine gets you moving and up to speed surprisingly briskly. This is thanks to 147kW of power that peaks at 3,800rpm and the very usable 440Nm of torque that holds from 1,750rpm to 2,750rpm.

The engine has plenty of get up and go down low and through the mid range without any noticeable drop off as you wind it up towards the redline. It’s got everything needed to handle the near 2 tons of weight and more. At low revs the familiar note of a diesel engine can be heard, though for the most part its a smooth and civilised power plant that’s easily drowned out by the stereo.

Naturally as a diesel the economy figures are impressive, officially rated at 7.5L/100km our 8.4L/100km wasn’t far off the mark. 8 gears from the sports automatic no doubt play their part in keeping the Santa Fe a light drinker, there’s plenty of gears to choose from and it’s never trapped holding a gear too long with the right ratio gear there when the engine needs it. It’s a smooth operating unit as well only ever kicking up a fuss if you back off just as it’s in the middle of an up shift. 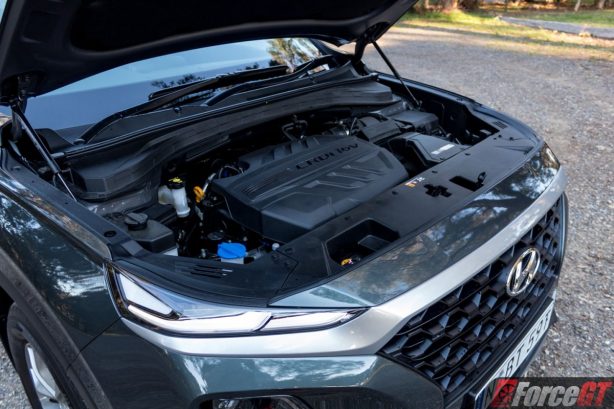 The laws of physics are no friends to large cars, their mass and size working directly against them in the handling department, yet the Santa Fe carries a nimbleness to its steps. Hyundai’s engineers have imbued the chassis with sufficient rigidity to overcome its plumpness and the end result will have you convinced you’re throwing a large hatchback around through the bends.

More at home in the suburbs than the bush, the ride is on the firmer side but don’t fret, you can still plough over large speed bumps with impunity while laughing at their feeble attempts to slow you up. The turn in feels great and responsive easily putting a number of other smaller SUV’s to shame. 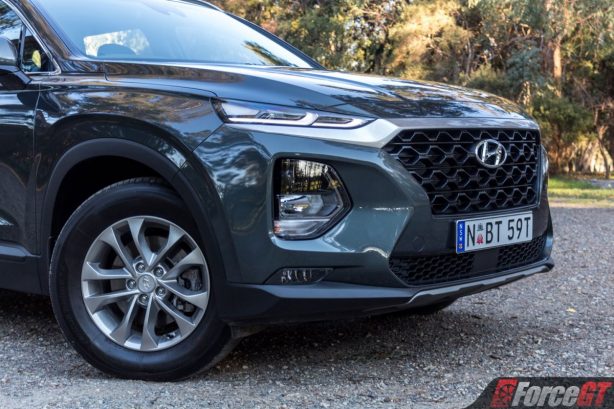 Of the three grades available it’s the Active holding the entry level position which means the more impressive toys and features are reserved for those with deeper pockets. That being the case even in Active trim there’s still an impressive selection of modern tech and safety features ready for you to play with. For your convenience you can expect:

The stereo is controlled through the 7-inch touch screen display where audio quality is acceptable from the 6-speaker system. It’d be nice to have more clarity through the range and some punch from a sub woofer but for an entry level setup it does okay.

I certainly wasn’t expecting active cruise control, lane keep assist and automatic high beam headlights when I first fired it up yet here they all come fitted as standard in the base spec model no less. There is room for improvement regarding the lane keep assist system, it’s one of the more aggressive ones and can take the racing line aggressively through some corners much to the detriment of other drivers on the inside. It can be turned off of course but you’ll have to do this every time you start the car up as there’s no way to leave it off by default. 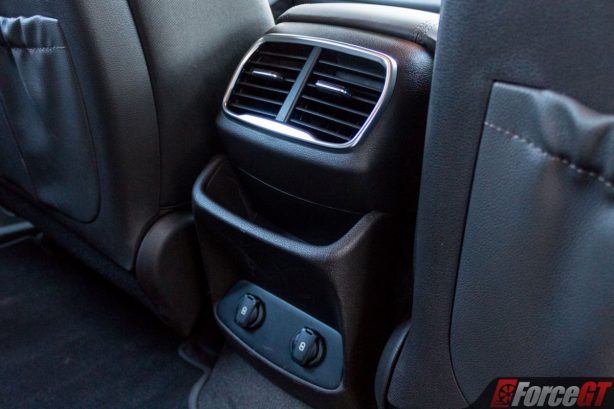 The Santa Fe is a 5-star ANCAP crasher, as per the previous model. 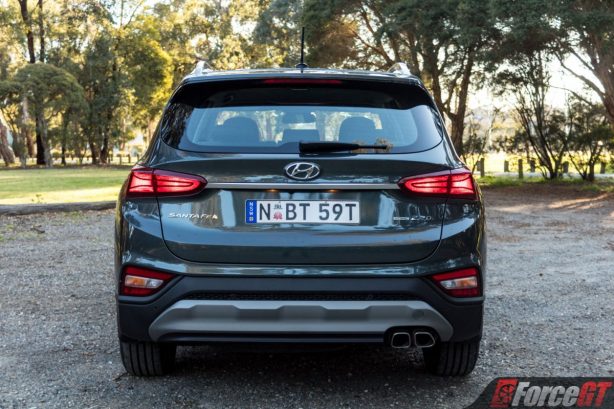 I’m struggling to find any major blemishes to balance out everything that the Santa Fe nails. Hyundai have a real winner on their hands with the Santa Fe and it only gets better as you step up from the Active into the higher spec’ed Elite and Highlander grades. The respectable 5-year warranty and approachable price should land the Santa Fe squarely in your sights if you’re considering 7 seats with style.