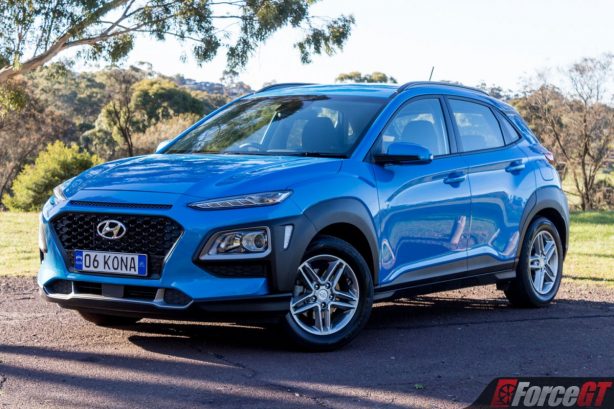 The Hyundai Kona is the smallest SUV available from the Korean car maker, arriving at the party fashionably late its got some stiff competition in the form of Mazda’s CX-3, Honda’s HR-V, Toyota’s C-HR and Subaru’s XV. Hyundai have opted to take their time with the Kona giving them ample time to discover what the market wants in a chance to one up the rivals. 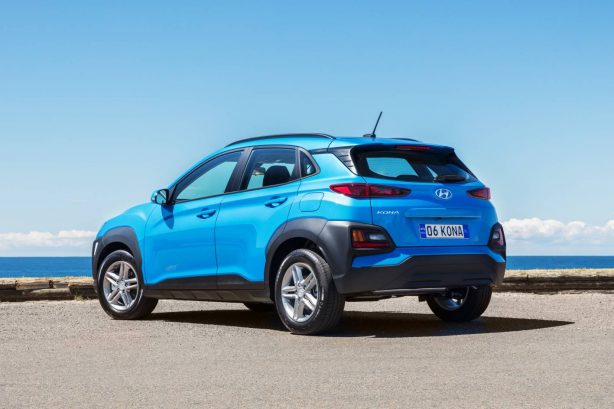 And they’ve definitely one upped the competition in terms of looks as the Kona is a good looking thing. Even in base spec our Kona Active bursts with style and character. Cleverly positioned driving lights take the traditional home of the headlights which now live in the front bar. Not only do the razor sharp driving lights give the Kona an aggressive front end, the lower position of the headlights won’t blind other drivers with lower driving positions, and they’re also electronically level adjustable.

Hyundai know they’ve hit design gold which is why the Kona comes in a variety of striking colours all designed to draw your gaze to its lovely lines.

It seems to be the same story with most modern entry-level Hyundai’s in that the exterior can pack a visual punch while the interior struggles. First up there’s an abundance of hard plastics used throughout, most notably along the door trim and arm rest. The storage pocket at the base of the centre console has a textured plastic finish which means anything placed on it slides all over the place, as the natural place to put your phone I found myself opting for the drink holders instead.

To improve things Hyundai has given all Kona’s leather wrapped steering wheels and gear selectors, given that’s where your hands are 99% of the time it’s solid addition not found in rival’s base models. 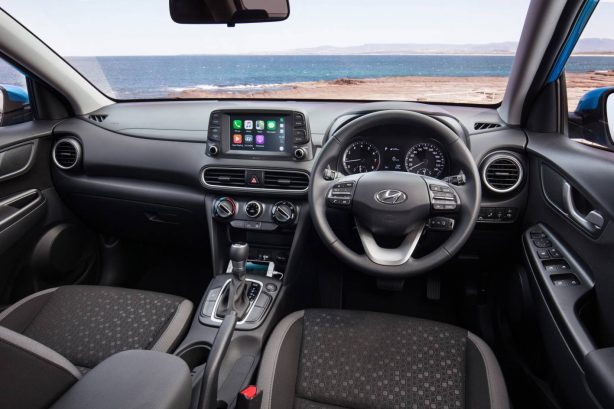 The seats while lined with cloth and manually adjustable were certainly comfortable and offer up the popular high driving position that’s a must with SUV’s, adequate side bolstering even lets you have a crack through the bends should you choose to.

The ergonomics of all controls for the Kona were spot on, everything is where you expect it to be and at just an arms reach away, most importantly it’s all simple and easy to use so you can keep your eyes on the road.

The 7-inch infotainment touchscreen display features a well designed interface and the latest Android Auto and Apple CarPlay functionality, though it does get dull on a bright day lacking the brightness of other systems so there’s room for improvement. It’s hooked up to 6 speakers that when cranked up put out an alright sound, not amazing but definitely not a budget affair. 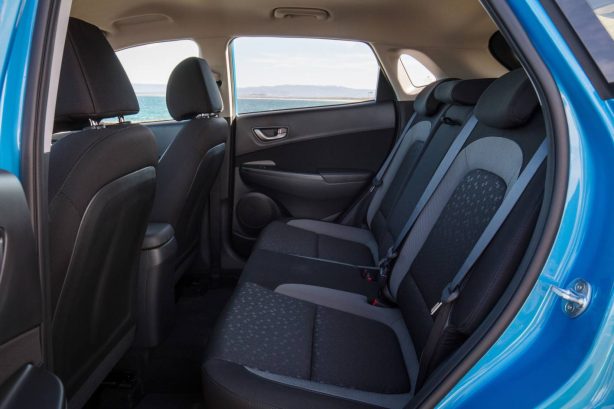 The back seats provide good waist, shoulder and head room for two full grown adults but adding a third to the mix is a struggle. With the front seat locked into my usual driving position (I’m around 6 foot) it became apparent that leg room in the rear was lacking. With drivers under the 6 foot mark things become far better. Two sets of ISOFIX mounting points are available along with the drop down arm rest.

To make the most of the 361 litres of boot space the 60/40 seats fold down opening up space for those bulky items. For the smaller stuff you can lock it down in place thanks to the bag hooks and 4 mounting points located in the boot. In order not to rob the boot space of valuable capacity Hyundai have only provided a space saver spare wheel. 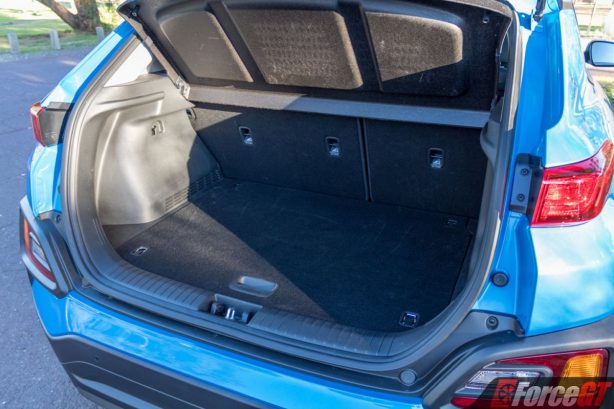 Ordinarily SUV’s struggle with visibility due to their high door sills and thick C pillars and it’s the same deal here with the Kona, the rear left blind spot demands extra attention when swapping lanes. Luckily our Kona came with the $1,500 optional Safety Pack (which I highly recommend) that brings a whole host of safety tech on board to make your life easier: 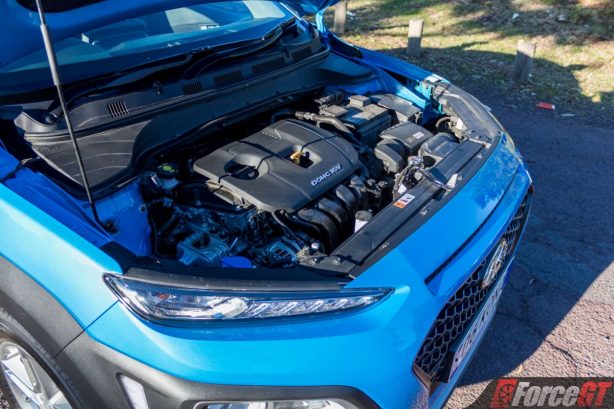 Tucked under the bonnet you’ll find a 2.0-litre 4-cylinder engine capable of 110kW at 6,200rpm and a maximum torque delivery of 180Nm at 4,500rpm. It’s a bit of a noise maker when you let the revs climb and those power figures won’t set the world on fire, however you’ve always got the option of the gruntier 1.6-litre turbocharged engine.

What the engine lacks in refinement and raw power it more than makes up for with it’s strict fuel budgeting. We scored fuel economy figures of 6.7L/100km against the rated 7.2L/100km due to ample freeway driving. A 6-speed automatic has been matched well to the power delivery and while it won’t shift as rapidly as a dual clutch unit, with only 110kW on tap it really doesn’t matter, instead you gain superior low speed control and smoothness as found in all torque converter or CVT automatics. 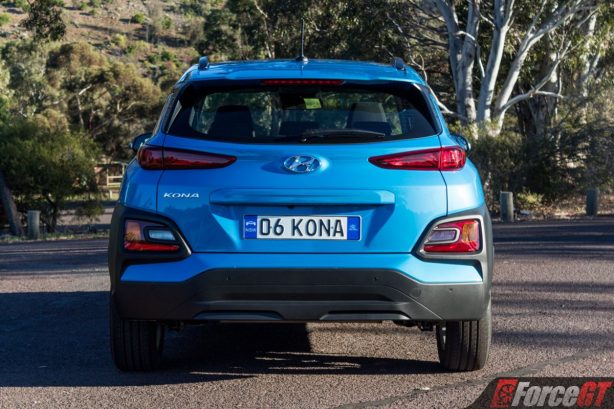 On the handling side things are a lot more fun than expected, where I anticipated soft wallowy suspension the Kona treated me to a firm predictable setup. You can happily take this thing through the bends at pace, just remember to dial it back when you’re tackling car park speed bumps as the firmer ride doesn’t go down too well here. 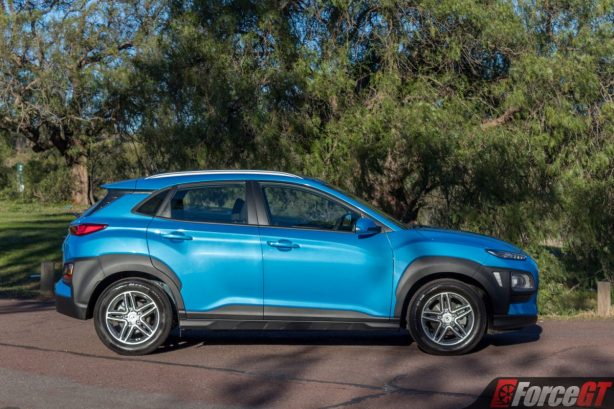 While the Kona is relatively well equipped (see above), the omission of embedded satellite navigation means users are limited to the data-zapping maps on their smartphones.

Other gripes include the lack of ‘Auto Up’ on the driver’s window in this entry-level Active and power windows backlighting for the passenger windows.

Gorgeous looks, great safety tech and an approachable price make the entry level Kona Active a major contender in the small SUV segment. Hyundai has studied the competition in depth and put together a base package that approaches mid spec in several aspects without breaking the bank.