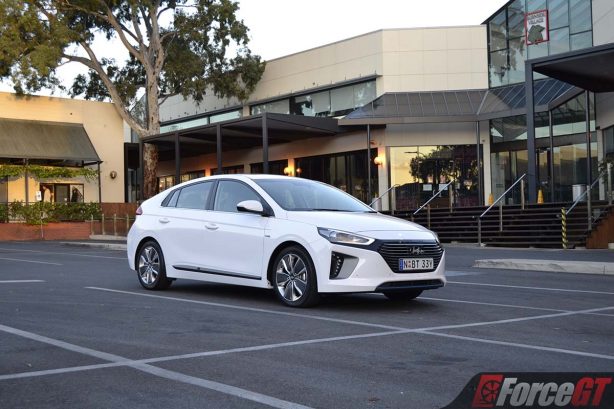 Launched globally in 2016, the Ioniq is Hyundai’s first mainstream hybrid model and part of the brand’s push to introduce up to 15 eco-friendly cars to the market by 2020, consisting of a range of hybrids, plug-in hybrids, fully electric vehicles and even fuel cell vehicles.

The Ioniq will make up three of the new models, which along with the conventional hybrid, will also be sold as a plug-in hybrid and full EV.

In Australia, the Hybrid is the first variant to arrive and had a ‘soft’ launch in March, where 70 units were put into service with the Australian Red Cross (34), South Australian Government (28) and Northern Alliance Victoria (7) ‘to get real-world feedback about the cars’ performance and practicality’.

The full line-up will launch locally next month, and because it’s not officially on sale yet, Hyundai hasn’t released the pricing for the Ioniq Hybrid tested here. However, we expect the range to start at around the $35,000 mark – the same ballpark as the Toyota Prius. 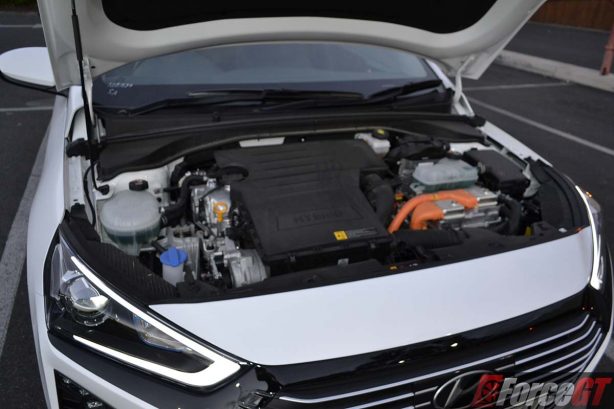 And like the Prius, the Ioniq Hybrid’s marries a conventional petrol engine with an electric drivetrain to keep emission and fuel consumption down.

The 1.6-litre four-cylinder GDI, Atkinson cycle petrol engine comes from Hyundai’s familiar Kappa family and produces 77kW at 5,700rpm and 147Nm at 4,000rpm, while the electric motor is a permanent magnet synchronous motor and generates 32kW and 170Nm of torque. Combined, the system out delivers 104kW of power and 265Nm of torque, 14kW higher than the Prius Hybrid.

A small 1.56kWh lithium-ion-polymer battery hides in the same space as the 45-litre fuel tank underneath the rear seats. Fuel consumption is rated at an impressively frugal 3.9L/100km, although on test, we managed a combined average of 4.8L/100km – a respectable figure but well short of the Prius’ class leading 3.4L/100km. 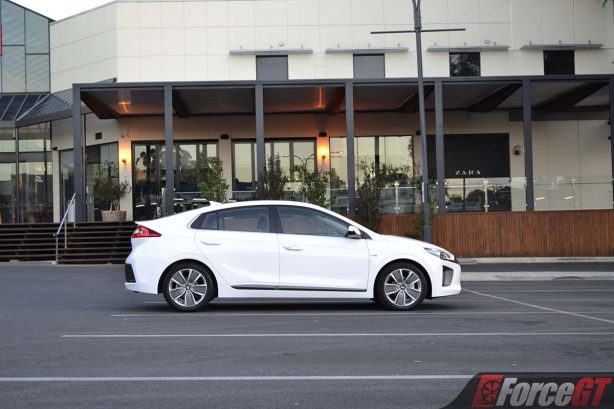 While retaining the wedge shape design that is synonymous with most dedicated hybrids, Hyundai’s designers have managed to make the Ioniq look more like a conventional hatch, not to mention much better looking than the overly fuzzy Prius.

Inside, the interior is made of ecologically sensitive materials that look and feel appealing. The black interior is punctuated with lashings of blue on the seats, dashboard, digital instrument cluster, as well as the lower part of the steering wheel, air vents and the starter button.

Interior ergonomics are generally good, too, although for a high-tech vehicle, Hyundai has decided to fit a dreaded old school foot brake instead of an electric parking brake.

Likewise, the graphics on the 8-inch infotainment system looks dated, while the 8-speaker sound system isn’t the punchiest (good clarity though), despite being Infiniti branded and equipped with an external amplifier. 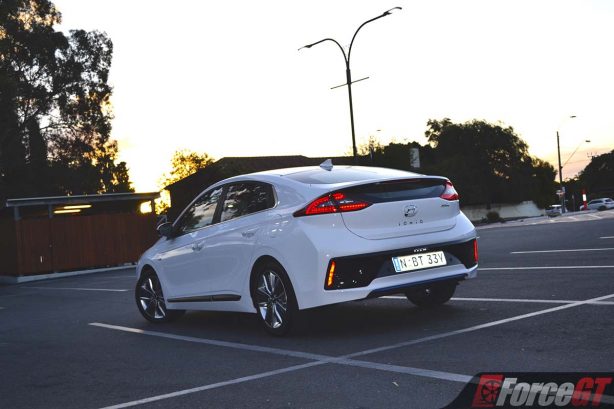 Hyundai says the Ioniq fixes a couple of often criticised issues on hybrids, especially the ‘elastic band’ feel associated with the CVT hybrid transmissions favoured by its rivals. Indeed, the Ioniq Hybrid uses a 6-speed twin-clutch (dry clutch) transmission that all but eliminates the dreaded CVT drone.

We are also happy to report there is no hesitation from this transmission either, with the car taking off smoothly and when the engine is in stop-start mode.

In Sport mode, the transmission is quick and crisp just like any good twin clutch gearboxes but it’s unlikely you’ll want to put it in Sport often, as the whole point of driving a hybrid is to be as frugal as possible. The ‘ECO driving’ bar also acts like a big red light that discourages you from flooring the paddle because all you’ll want to do is get the little bar full all the time!

Importantly, the hybrid system also switches smoothly without a hint of vibration from under the bonnet.

Unlike the Prius Hybrid which is limited to 30km/h (not to mention a featherweight right foot) if you want full electric mode, the Ioniq goes all the way up to 180km/h when the condition is right! Around town, it cruises in full EV mode as often as a plug-in hybrid model, as long as the batteries have enough juice.

Its braking system is ahead of the game too, not only switching seamlessly between braking with the motor and braking mechanically, but also the most ‘normal’ in feel.

Another area Hyundai sets out to remedy is in the way it drives. They want the Ioniq to be a ‘fun-to-drive and comfortable’ hybrid car and not just an efficient A to B transport. It’s an ambitious claim and true to some extend. The Ioniq is certainly comfortable but it’s no sports car.

Based on a modified version of the new i30’s platform featuring a bespoke multi-link rear suspension made mostly out of aluminium, it has good body control with little body roll. Its batteries also help with weight balance, giving the car good composure but it doesn’t take much to get its nose to push wide.

Nevertheless, drive within its limits and the Ioniq feels just like a regular hatchback with good ride compliance around town. 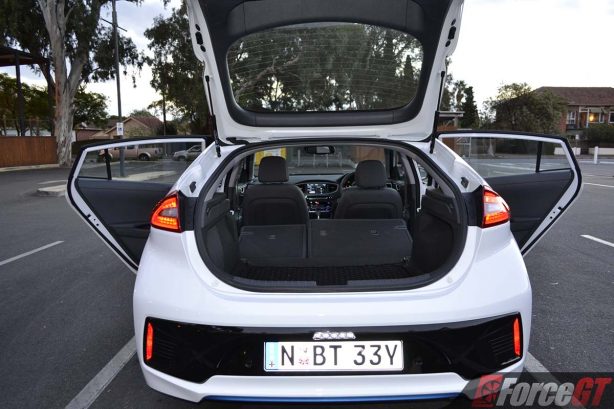 There’s also plenty of storage dotted around the cabin, including a sizeable glovebox and a wireless charging pad for your smart phone.

You get plenty of soft-touch materials on the upper section of the dash and doors, and quality feeling switchgear.

The seats are comfortable and supportive, with the driver getting electric adjustment with memory. At the back, legroom can be a little tight for taller passengers but headroom is good all around even with the standard sunroof.

It’s another sign of how far Hyundai has come from its humble beginnings. If Hyundai could bring the Hybrid to the market at Prius price, there’s no doubt the Ioniq will be another popular model for the brand.