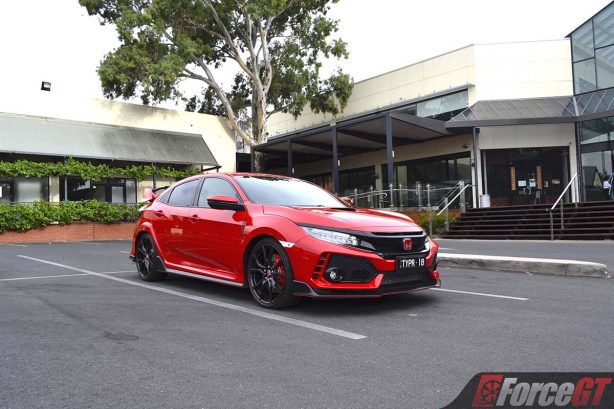 Type R – a badge that used to strike fear and ecstasy all at the same time.

It first adorned the rump of a Japanese-market NSX a quarter of a century ago and went on to entertain us with the likes of the Integra and S2000 Type R’s, building a cult following that inspired a generation before conspicuously going AWOL.

It’s been an immensely long wait, as the red-blooded badge last graced our streets as a 2012 Civic Type R but it’s finally back!

Even before it reached us, the 2018 Civic Type R has already risen to prominence, setting the Nordscheleife lap record for front-wheel-drive production cars and in the process, announcing to the world it meant business. And unlike its predecessors, the fourth-generation Type R has been designed and developed from the grounds up as a performance machine for the global market. 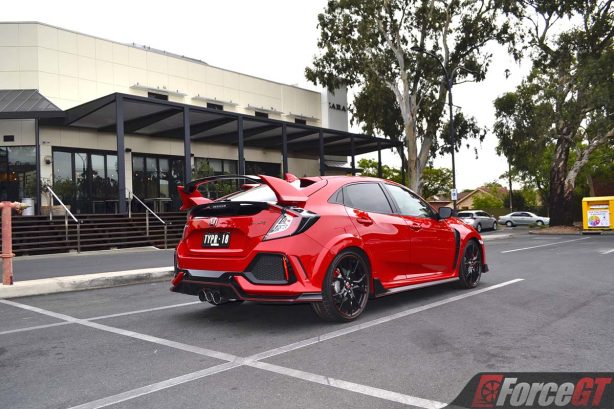 Needless to say, when Honda Australia says they are throwing the $50,990 five-door Type R’s keys our way, we were more excited than a tooth fairy finding a tooth under the pillow.

While we know the latest Type R is a formidable track weapon, more relevant to us mere mortals is how it handles on everyday roads and fulfil the hot hatch brief – comfortable enough as a day-to-day hatchback, but also raises the heartbeat once the road opens up.

We probably couldn’t start a Type R review before addressing its controversial styling. Its blistered wheel arches, flamboyant body kit, triple tailpipes and towering rear wings are almost a caricature of the donor Civic hatch and makes the unadventurously styled Golf R, and even the Focus RS, nearly invisible. 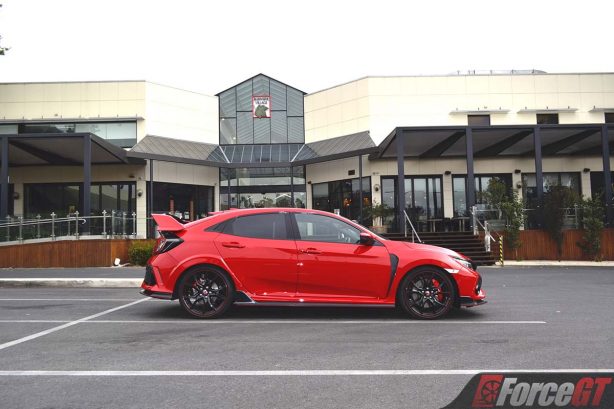 The photos on this page don’t quite do it justice, either, as its chiselled bodywork and wide stance look impressive in the flesh – almost like a DTM racer. Such daring design couldn’t have come from anywhere else but Japan, and most of us at ForceGT are fans of its bold styling.

The gaping holes, rear wing and other styling elements aren’t just for show, either, as they create genuine downforce at speed.

Inside, the interior is largely carried over from the Civic hatch, albeit made racier with plenty of red stitching, anodised-red trim strips on the dash and doors, a pair of excellent, body-hugging Alcantara-wrapped sports seats and red seat belts. 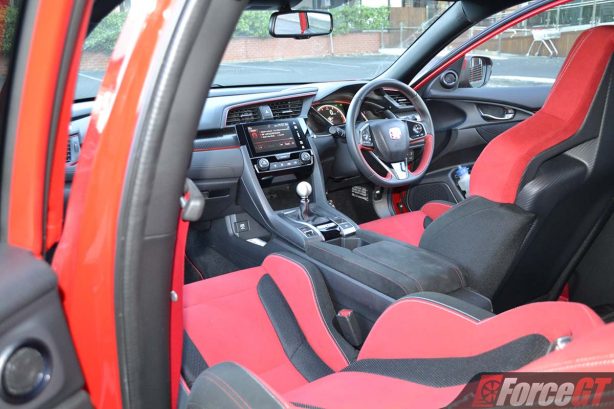 Sitting on Honda’s new Global Compact platform, the clean sheet design means the front seats are much lower than those of the last-generation car and deliver an agreeably sporty driving position. At the back, there is further seating for two, with a similar amount of leg and headroom as the Civic hatch.

The digital instruments adapts to your selected driving mode and preference. The instrument binnacle turns an angry red when +R mode is selected, along with an enlarged rev counter and a beneficially large row of shift lights that help you find the perfect gearshift timing as the rev needle sweeps towards the 7,200rpm redline.

It’s undoubtedly one of the most exciting driving environments in a hot hatch.

While the standard of perceived quality is a huge improvement over its predecessor, it remains some way off the benchmark Golf R’s interior or even the latest Peugeot 308 GTi.

Yes, the switchgear and fittings are robust, with artificial suede used judiciously around the places; but one wouldn’t describe the Civic Type R’s interior as ‘premium’. 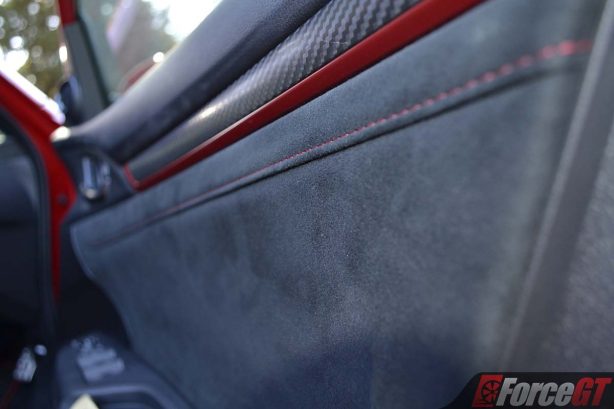 Yet, none of this matter to the Type R’s typical car enthusiast audience, as the moment you lay hands on the beautifully machined sphere of aluminium alloy atop the short gearshift lever, you know you’re in something very special.

This is evident from the ferocious in-gear acceleration where it has an edge over its all-wheel-drive rivals. However, thanks to only two front driven wheels, the Type R’s official 0-100km/h dash is 5.7 seconds – a few tenths adrift of its rivals.

But what it looses in straight-line performance, the Honda’s beautifully balanced chassis makes up in its ability to string apexes together effortlessly. With its default drive mode set to Sport (save the +R for track as it’s too uncompromising for the road), you can throw the Type R around and it responds with pin-sharp turn-in and tight body control. 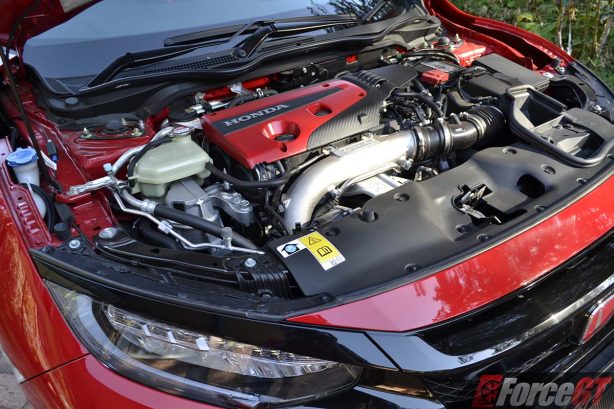 It is capable of firing out of third-gear corners at incredible speeds as the limited slip-front differential generate a tremendous amount of grip, demonstrating the Type R’s delightful agility and chuckability.

However, the car takes no prisoners and will understeer if you’re careless with the power and foolish enough to turn off the traction control. You’ll need to be considered with your inputs to get the best out of the car.

The six-speed manual isn’t the slickest but its short throw, mechanical feel and rev-matching function are a joy to use.

Its steering is precise and at just over two turns lock-to-lock, is quick, too. Its weighting in ‘Sport’ is almost perfect although greater communications wouldn’t go astray. 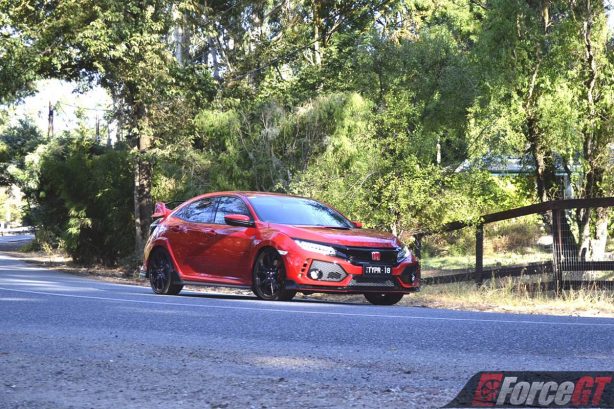 Amazingly, there is very little torque steer, given its potent 400Nm of torque, unless the front wheels are on uneven surfaces.

Back in the urban environment, the Type R is surprisingly civil when you flick the drive mode toggle to ‘Comfort’, where the softer damping provides a suppler and more forgiving ride compared to the previous model, especially with its liquorice-thin 245/30R20 bespoke Continental rubber.

You can quite happily take the car shopping and load up its 414-litre boot with supplies, making the Type R a perfect daily all rounder and one of the easiest performance cars to live with.

The Brembo stoppers (345mm four-piston up front) can feel a tad sensitive around town but remarkably effective in sporty driving, with a firm, progressive pedal feel and immediate bite. 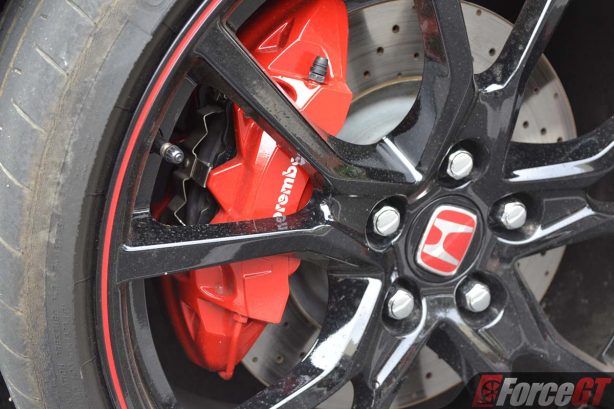 Its fuel use of 10.0L/100km on test is 1.2L/100km off its official rated figure but is around the ballpark for machines of its calibre.

However, the lack of built-in satellite navigation is grim at this price point.

The all-new Civic Type R is the textbook example of what an ultimate modern hot hatch should be – easy enough to live but extraordinarily fun at the flick of a switch.