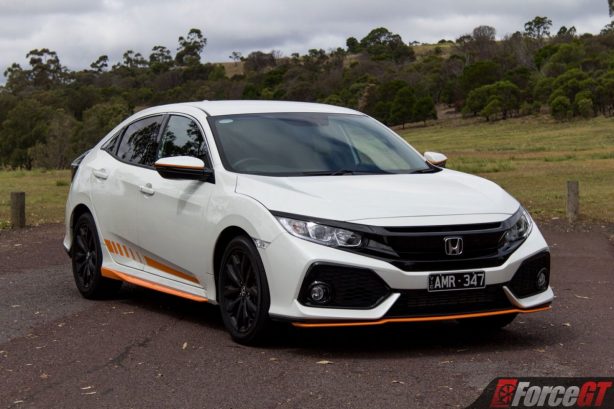 The humble hatchback has become the jack of all trades in the car world. Once upon a time there used to be just three variations to choose from. The cheap one that only driving instructors bought, the sporty one that was no faster than the cheap one and finally the sensible mid range one that everyone else bought.

Today though, Honda’s Civic Hatch has no less than six different iterations starting with the bare bones VTi and ending with the steroid infused Type R. Smack bang in the middle sits the VTi-L with an equally mid-range priced of $27,790 plus on-road costs, which begs the question; what makes this version stand out from its brethren? 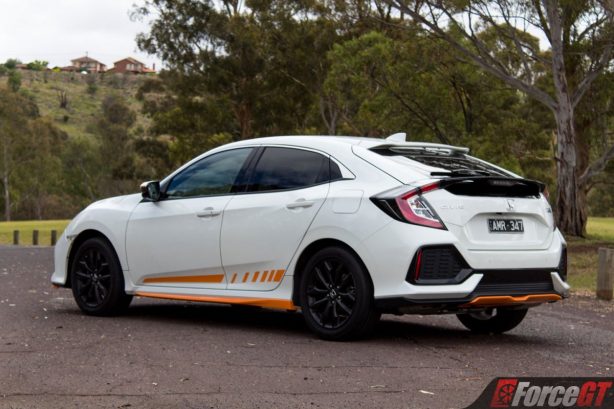 To start with, the Civic VTi-L that we’re testing is an Orange Edition model sporting a price bump to the tune of $2,998. For the extra dosh, the Orange Edition gains a front under spoiler, side skirts, rear under spoiler, door/mirror decal set and black 17-inch alloy wheels. Personally, I think the Civic looks a real treat without all the extra bling and if you’re willing to splurge you might as well opt for the $1,502 more expensive Civic RS which looks more aggressive than the Orange Edition and comes with an expanded feature list.

Inside, the Civic hatch maintains all of the well thought out interior design that we liked so much from the Civic Sedan, with the notable difference in the rear. Boot space with the split 60/40 seats up comes in at a very usable 414 litres with more available should you drop the seats entirely. Instead of some bulky removable window blind for privacy or a parcel tray, the Civic hatch has a clever horizontally extendible privacy cover that tucks neatly out of the way when not in use. Those that dig down into the spare wheel well will sadly discover only a temporary space saver rather than a full sized spare which isn’t ideal for long trips. 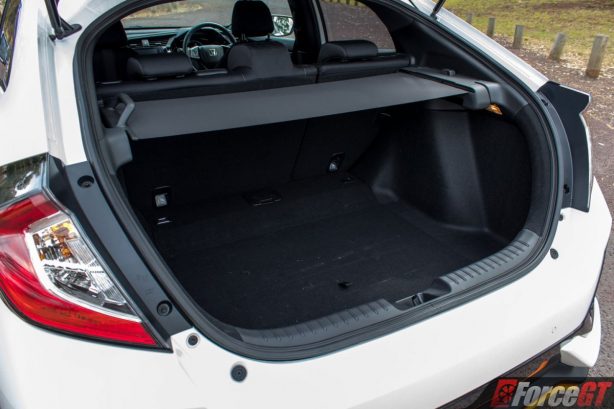 With a hatchback body, the Civic loses some of its visibility out the back due to the low raked window angle, spoiler and thick C pillars. Factor in the already thick A pillars and overall visibility is far from optimal. A rear vision camera with multiple view options and side vision camera are fitted to address this, along with front and rear parking sensors to bring back some confidence for those tight manoeuvres or rapid last minute lane changes.

The redesigned rear may have passengers worried about getting the canned sardine treatment, while it’s still a squeeze with three in the rear, there’s ample leg room. However, taller passengers will be wanting for more headroom. As a mid-spec model, the VTi-L saves the leather for control surfaces like the wheel and shifter, only leaving cloth trim and plastic to furnish the remaining surfaces. It looks okay but at the end of the day, there’s no escaping the cheapened feel that cloth brings to the party. 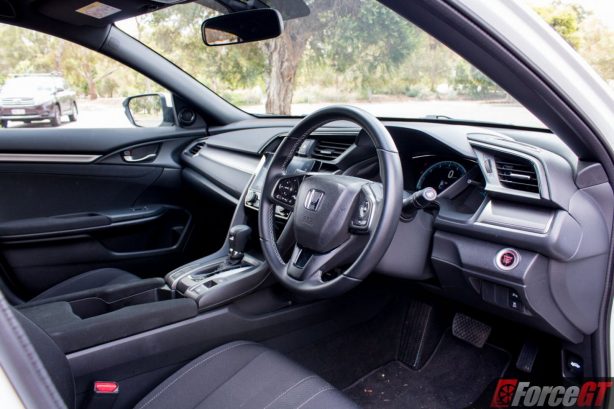 Ordinarily, Honda have a build quality that’s right up there with the best, but there were a few glaring issues that can’t be ignored this time. First up, the wheel mounted volume slider control failed to work unless pushed which isn’t the first time we’ve seen this issue on the 10th generation Civic. Something entirely unexpected was the faint door rattle that could be heard when the stereo had a lull in volume. There were infotainment troubles on the software side in the form of user prompts for the audio source whenever switching to the radio screen which luckily you won’t have to switch to and from all that often, as there’s no optional satellite navigation unless you grab the top spec VTi-LX.

The main reason to opt for the VTi-L is the turbocharged power that the 1.5-litre engine creates, 127kW at 5,500 rpm to be exact. Torque gets a hefty bump up to 220Nm from 1,700rpm all the way through to 5,500 rpm before dropping off. This engine loves to rev and has plenty of performance up top, you get a double punch through the seat when the turbocharger and VTEC both work their magic in tandem.

The CVT gearbox can be left to its own devices or prompted into life with the wheel mounted shift paddles, at speed the CVT does a great job almost making the paddles redundant. Dial it back to a comfortable pace and it’s difficult to pick any major downsides to the CVT’s behaviour aside from the lack of engagement and rapidity found in competing manual or dual clutch setups. Even after a hefty belting up and down the Victorian coast, the Civic managed to score quite well for fuel efficiency, just 7L/100km against the rated 6.1L/100km. 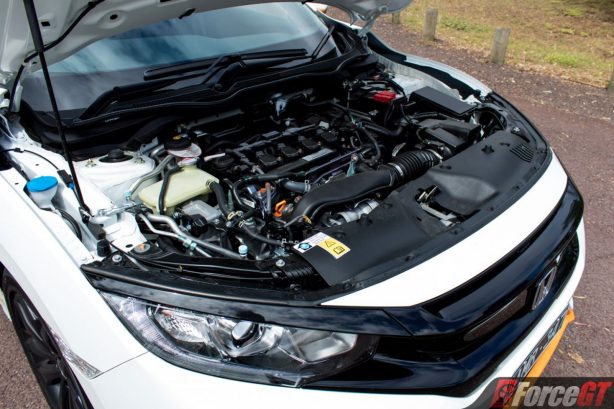 So what prompted a midnight dash to Apollo Bay and back the very same day I picked up the car? Simple, it didn’t take me long to realise just how well sorted the underpinning chassis and suspension setup were. There’s no doubt some Type R DNA floating around the entire 10th generation Civic range. It’s no hot hatch but the turbo power and driving dynamics see it creeping up on some of the warmer hatches out there, a real shame there’s no manual gearbox available to tie the whole package together.

At 1,365kg the Civic hatch keeps its weight in check, resulting in a strong turn in from the stiff chassis and plenty of grip for most situations. Taken beyond the grip limit and it progresses linearly into easily manageable understeer before settling back to neutral and confidence inspiring handling. With a firm ride the Civic hatch can still tackle rough roads with ease while body roll through the bends is lessened for greater control. 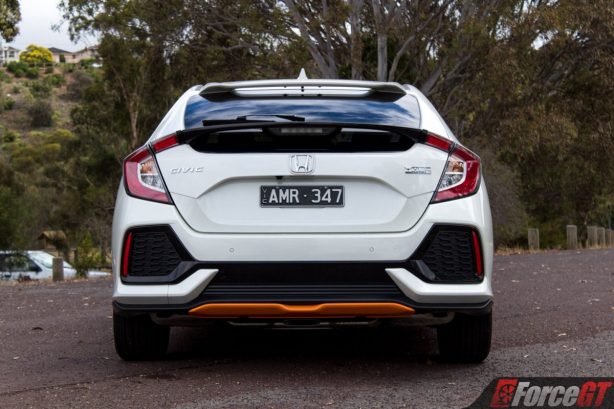 Honda has kept all their best features locked away in the higher spec VTi-LX which is a shame as the mid range VTi-L feels lacking in the feature department. Digital radio and speed limited cruise control are about as exciting as it gets. The 8-speaker stereo system sounds decent and doesn’t blow out when cranked all the way up but lacks the volume, punch and clarity of superior systems.

A 5-star ANCAP safety rating graces the Civic hatch with the usual assortment of airbags. It’s only the top spec VTi-LX that gets the full suite of safety features as the VTi-L has the basics covered yet lacks the latest in active safety systems. 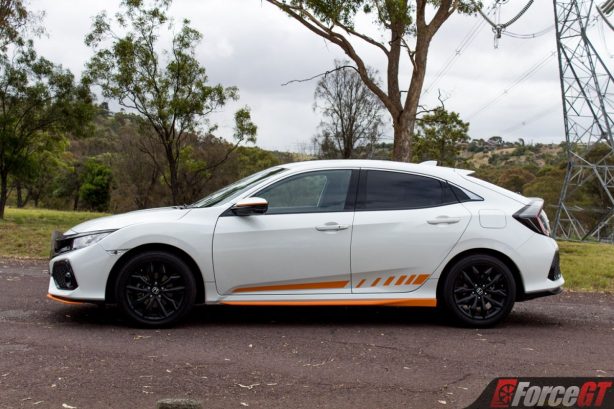 Modern sharp looks with the driving dynamics to back it all up make the Civic hatch more exciting than most and the good praise continues on the inside. The well thought out cabin brims with storage and practicality while sporting a stylish design.

As with all new Honda’s the Civic comes with the 5-year unlimited kilometre warranty not found in many rivals. The stand alone VTi-L represents good value for money but I’d skip the Orange Edition and commit to the more stylish and feature packed RS if style is a priority.