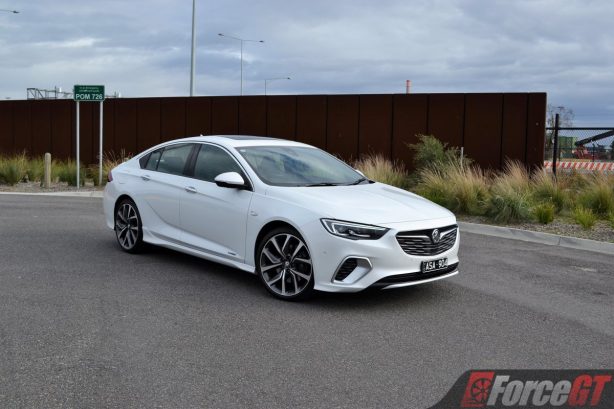 It’s a Commodore but it’s not a Commodore. Yup, forget what you know about the big four-door sedan that once graced the driveway of your parents’ or grandparents’ home. Forget about the meaty throb of eight firing cylinders that was once your alarm bell every morning as your dad started the car and left for work. Forget about that rear wheel slide that almost got you into trouble when you took the family car out for a sneaky spin on the day you first got your driver’s license.

After forty years as Australia’s favourite family car (I’m expecting eggs to be flying in my direction from fans of a certain blue oval badge), the only thing that made it to the new-generation Holden Commodore is its nameplate. Times have changed, so is the automotive landscape. The ever soaring fuel prices have forced people into smaller, more fuel efficient vehicles. And the definitive family car is now an SUV. It was an inevitable end of the road for the Aussie-built rear-wheel drive sports sedan. 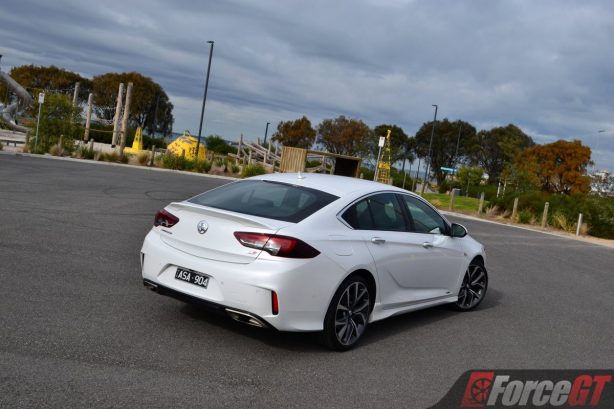 The large car market has evolved and so a new era has begun for the Commodore. This new ZB generation is Holden’s take on the modern large sedan, which, in order to remain relevant in a world with unwavering appetite towards SUVs, has gradually adopted a more sporty and performance-orientated flavor. Cases in point, just look at cars like the Kia Stinger, Skoda Superb, Volkswagen Arteon and even the once librarian-of-the-car-world, Toyota Camry.

It’s a step in the right direction. Families can have the SUVs, and what’s left for us keen drivers is some quality time with our daily driver cum weekend toy known as the large sedan. And the new range-topping Commodore VXR tested here fits that brief more than ever before. Yes, it no longer has a V8 under the bonnet, instead, in its place is a direct injected, atmospheric 3.6-litre V6 that punches out a still respectable 235kW of power and 381Nm of torque, though a twin turbo set up would be a hell a lot better (a job for HSV, perhaps?). Having said that, the new car is some 60kg lighter and while a manual gearbox is no longer, the pairing of a new 9-speed automatic allows the new car to whip the 0-100km/h sprint in just 5.9 seconds (tested), not that much slower than the previous V8-powered SS-V Redline. 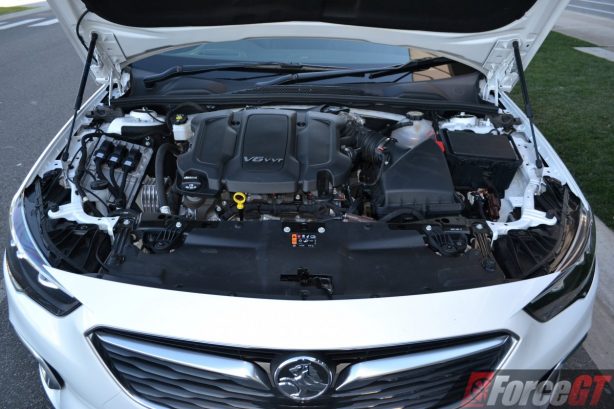 Of course, you want to talk about the noise. Admittedly, it’s no V8 symphony, but the lack of turbos to disrupt the flow of exhaust gases means the V6 still serves up quite a pure and satisfying growl as it hurls towards its 6800rpm cut off.

As a more appropriate comparison, the new V6 engine is miles ahead of the old six-pot in the VF series. With the same displacement, power is up by 25kW while torque has improved by 31Nm, though accessible from a relatively high 5,200rpm instead of 2,800rpm in the VF. It’s not the most refined V6 but it’s by no means coarse either. Being a performance oriented VXR model, I’m guessing it was the aim of Holden’s engineers to preserved a slight tinge of rawness in the engine, which injects the car with a bit more character. And as modern as the engine is, with direct injection and variable valve timing, it will still happily sip on 91RON unleaded petrol.

With the new 9-speed auto, 2 ratios of which are over drive gears, the V6 engine is almost idling when cruising in top gear at 100km/h, spinning at a sleepy 1,600rpm and sipping around 7L/100km. While the engine is muted, tyre noise is evident on all but the smoothest of bitumen. Not surprising given the car rolls on 20-inch wheels with very low profile rubber. 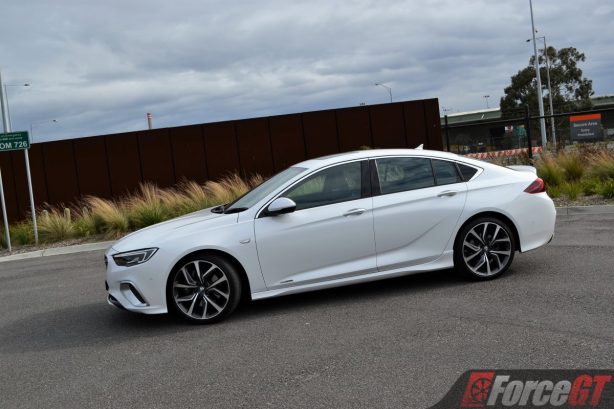 Equipped for the first time on all V6 Commodore models including the VXR is the adaptive AWD system. It employs Twinter’s twin clutch concept that uses one clutch to control torque to the right rear wheel independently of the clutch controlling the left, giving the Commodore its first torque vectoring system. It is predominantly a front-wheel drive with up to 50 per cent of torque sent rearwards when required.

Yup, no more big skids or tyre smoking, instead you get loads of grip be it in the wet or dry, which translates to safer and more secured handling. The VXR gets its own unique chassis set up and suspension tuning, with the front featuring a torque steer quelling HiPer Strut system while the rear has a five-link set up. There are also adaptive dampers and Brembo brakes all round. 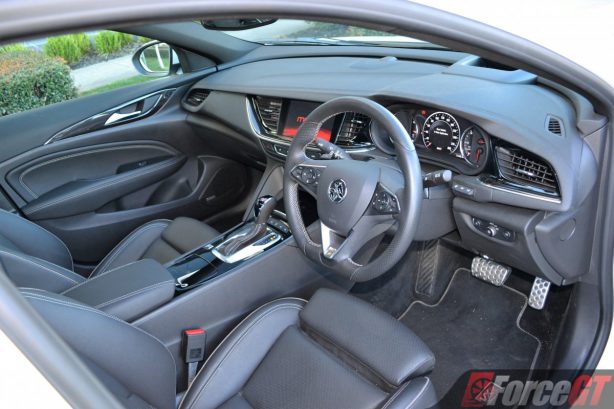 Holden’s extensive local suspension tuning has paid dividends in the ride and handling department, with the car having a good level of compliance and control over our crumbling roads. With the dampers in the softest setting in Normal drive mode, the ride is noticeably firmer than any standard Commodore but still comfortable enough for the daily grind. In Sport, the responses of the steering, throttle, transmission and dampers are sharpened, but the overall feel does not vary much from the Normal drive mode.

It’s in VXR mode that the sportiest Commodore variant truly comes alive. The setting takes the variable bits to their sharpest level, endowing the sports sedan with near flat cornering prowess and brisk direction change. Superb traction from the AWD system allows you to get on the power incredibly early on corner exit, without worrying about the rear end snapping loose like in the rear-wheel drive VF. There’s also the chassis’ remarkable talent in tackling mid-corner bumps with inspiring stability. 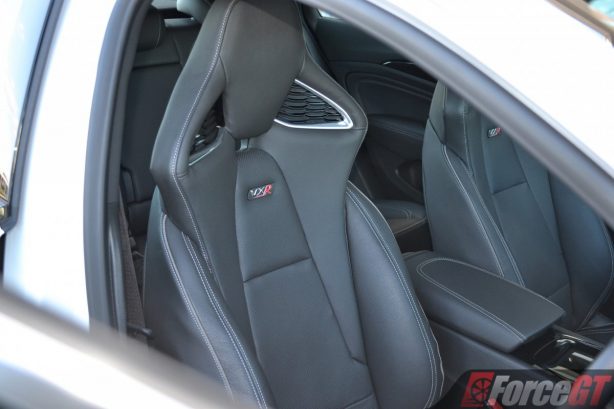 The steering is precise and relatively communicative for an electric rack but the transmission is slow in swapping cogs – at least during spirited driving – which can dilute the overall experience slightly. Don’t think that using the paddle shifters in manual mode is any better either because they too are a little dim witted, taking a split second to react to fingertips commands. I also find the “kick down” switch at the end of the throttle pedal annoying. It’s basically a switch that tells the transmission to down shift when you pin the throttle. Unlike in other cars, in the Holden you can feel an unpleasant “step” near the very end of the throttle travel.

Elsewhere, the Brembo stoppers are powerful and held up well to punishment during our handling and braking test. The feel through the pedal is also nice and progressive. 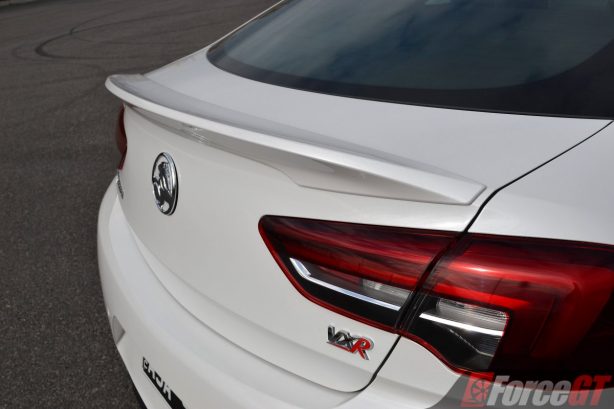 Designed and manufactured by sister company Opel in Germany, the European-themed styling of the new ZB Commodore looks premium and classy, though fans of the former more masculine shape of the VF will surely need time to warm towards the new liftback design.

With near perfect proportions and a wide stance from its beefed up bumpers and side skirts, the VXR is a modern and handsome looking thing that never ceases to draw attention from bystanders or curious looks from other drivers on the road.

Like the outside, the interior is positively more elegant and sophisticated than its predecessor. The layered dashboard creates a sense of space and flows cohesively into the door trims and centre console. Soft touch surfaces adorn most touch points and overall fit and finish is the best we have seen in a Holden.

In front of the driver, the VXR’s analogue instruments are augmented by a customisable 8-inch colour digital driver’s display that brings a raft of information, including clever timing that tells you the gap with the car in front. Some of the information are also duplicated in the standard head-up display that is fortunately still visible behind polarised sunglasses, unlike many other systems.

The 7-inch MyLink infotainment touchscreen interface that nestles neatly in the dashboard is equally up to date with built-in sat-nav along with Apple CarPlay and Android Auto support.

With delicate stitchings on the leather upholstery and ambient lighting in the dashboard and upper door cards, there’s a general air of quality about the new model that is more in line with its European rivals like the Volkswagen Arteon and Skoda Superb.

The back-friendly AGR rated front sport seats are not only very comfortable and supportive but come with massage function and adjustable side bolsters and under thigh support. Together with the reach and rake adjustable steering, it’s not hard to find a good driving position in the new Commodore.

Sadly, like its VF predecessor, the A-pillar is still relatively thick and combined with the window mounted wing mirrors, forward visibility out of corners can be a little tricky. 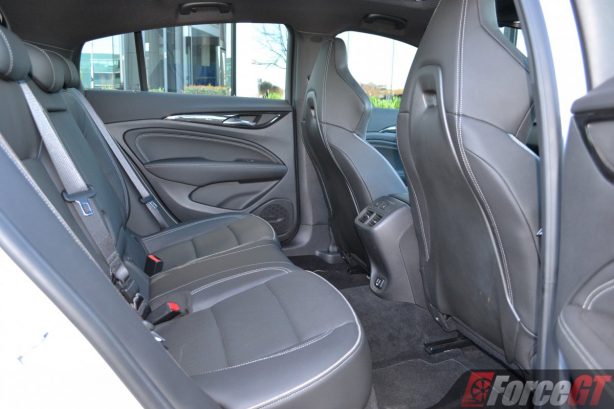 With most dimensions sitting between the VE/VF and VY/VZ Series Commodore, its overall size is bigger than you might think. Interior space is relatively generous both front and rear even with the standard sunroof. All seats are heated with the front pews also come standard with ventilation.

The liftback’s large and wide opening tailgate reveals a useful 490-litres of boot space that is expandable to 1,450-litres with the 40:20:40 split rear seats folded. Underneath the boot floor is a space saver spare and subwoofer for its punchy Bose Premium Audio system.

At $55,990 plus on-roads, the Holden Commodore VXR is no doubt a replacement for the previous SS-V Redline in price and hierarchy, but certainly not in anything else. It’s no longer a big V8 Aussie muscle car. Instead, the VXR has taken on an entirely different approach to performance motoring, with focus on sophistication, technology and efficiency rather than brute power. And on that brief, the VXR has succeeded.

But just as the Commodore has evolved, so has the segment. While the new car no longer has to fight off a certain blue oval badged rival, it faces even more challenging times. Has it got enough to take on the Kia Stinger GT and Volkswagen Arteon? That’s a different story.