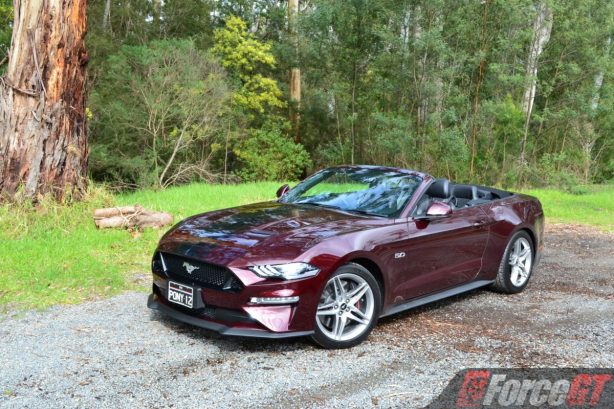 In a world of electrification, hybrid drive and downsizing, one car remains an icon for none of those. Carbon emissions and fuel efficiency are words it does not understand. And it chokes on good manners. The Ford Mustang is still unmistakably, unashamedly a Mustang. Amen to that.

For 2018, Ford has given the Mustang a thorough re-engineer while making sure none of the classic visual and aural drama it’s famous for is diluted. It’s been Australia’s most popular sports car for the past two years and with the mid-life update, Ford is leaving no stones unturned to ensure that status quo is retained. 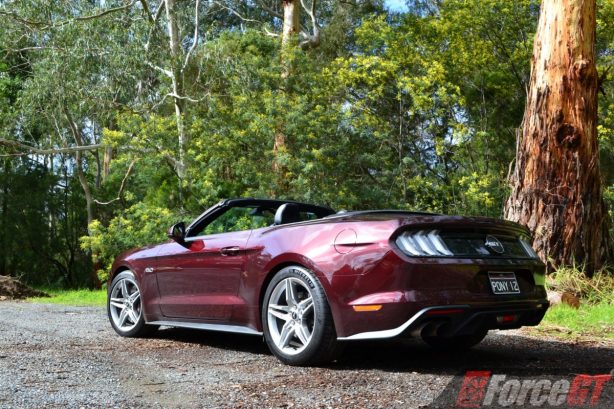 Capitalising on the Mustang’s tremendous success, Ford has also taken the opportunity to hike prices across the line-up. The range now starts at $49,990 plus on-road costs for the EcoBoost Fastback manual, a rise of $5,000 from before. The same significant increase propagates throughout the rest of the model hierarchy, with the stickers of V8-powered variants inflated even more. The range-topping GT Convertible automatic now asks $74,709 plus ORCs, a swell of $10,719.

Nevertheless, the Mustang GT is still the cheapest V8 sports car you can buy in Australia today – at least until General Motors decided to bring in a factory-built RHD Camaro into the country. 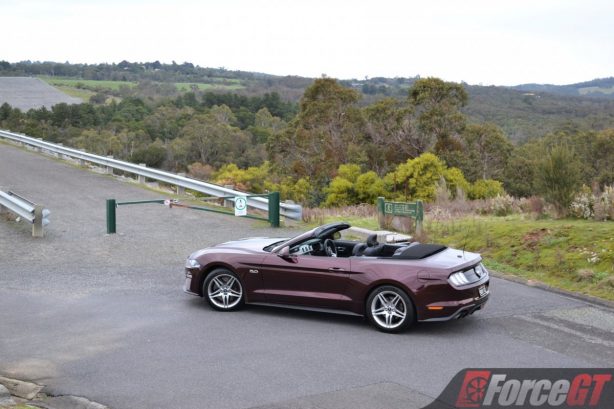 The pre-update model is already a menacing looking machine, but the 2018 refresh dials up that muscly appearance even more, with the front gaining a lower, redesigned bonnet and wider grille, complimented by repositioned bonnet air intakes that combined, deliver a meaner, wider stance. The update also brings all-LED headlights, including the signature tri-bar lighting.

The rear of the car gets revised LED taillamps and a new bumper, which can be matched with the optionally available rear spoiler. V8 variants boasts a quad-tip exhaust as standard, along with a black rear diffuser.

The GT carries over the multi-spoke 19-inch wheel from the outgoing model, while also offering an optional five-spoked 19-inch forged alloy (fitted to our test car).

There are also new exterior colours, including all-new signature Orange Fury as well as Kona Blue and Royal Crimson, along with Over the Top (OTT) stripe packages (fitted to our test car). 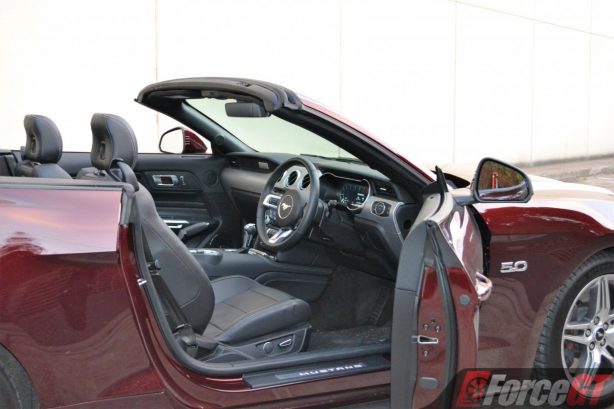 Ford has really taken to heart the widespread criticism of the old car’s plasticky interior, because the new one is a vast improvement. It now features soft-touch surfaces on the upper dashboard, centre stack and door trims for a more premium look and feel. The centre console adds a new hand-stitched wrap with contrast stitching and padded knee bolsters while door handles, rings and bezels are finished in aluminum. 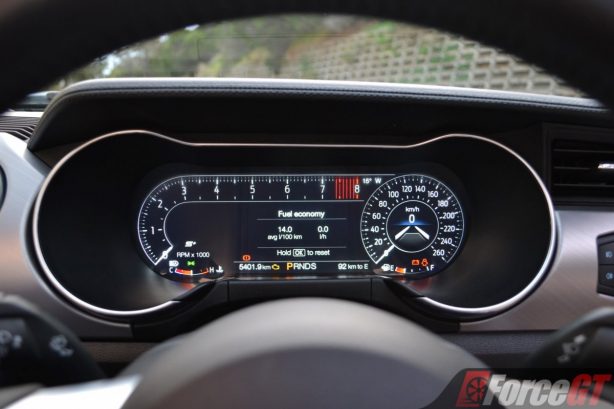 Perhaps, the biggest highlight of the new interior is the customisable 12-inch fully digital instrument cluster which Ford says is inspired by the Le Mans-winning Ford GT racecar. It offers three separate views, with customisable options for Normal, Sport, Track and Drag Strip modes as well as colour and gauge layout.

While the new digital instrumentation display brings a good dose of modernity to the otherwise retro interior, the clear plastic lens that covers the LCD screen tends to suffer from a bad reflection of the lower instrument binnacle trim. A less vertical lens position should fix that problem quick and easy.

Another much welcomed feature is the ability to alter the V8 engine note with the press of a button on the steering wheel. Standard on all GT models is a new active valve exhaust system that can vary the engine soundtrack via four exhaust modes – Quiet, Normal, Sport and Track. 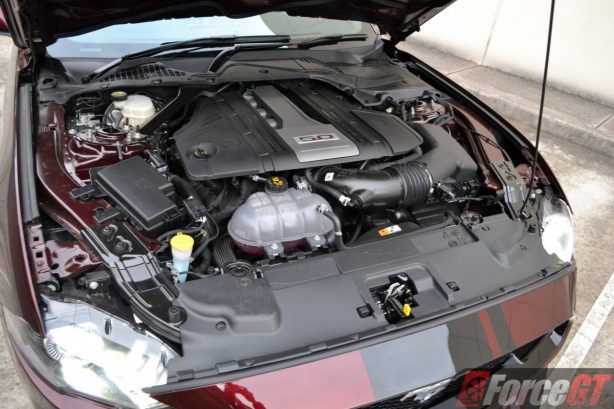 Far from just a styling exercise and features upgrade, the 2018 update also extends to the 5.0-litre V8 donk under the bonnet. Heavily reworked with the first application of Ford’s new dual fuel injection system (direct injection at high load and port injection at low load), the new mill has 33kW more power than its predecessor, delivering a peak of 339kW and 556Nm of torque, a jump of 26Nm.

Not that the previous V8 is lacking in power, the new unit’s bigger figures serve up an even more ballistic driving performance, most notable in off the line acceleration – it managed to shave about two tenths off the previous 0-100km/h sprint time to stop our clocks at 5.2 seconds (against the claimed 4.5 seconds). It revs quicker and harder, delivering a punchier mid range burst that results in huge forward thrust every time you plant your right foot on the pedal.

Stick the variable exhaust in Sport or Track modes and this thing sounds utterly insane. The deep, solid and metallic engine note is some of the best V8 theatrics of any production car. And above 5,000rpm, it’s almost NASCAR-like loud. The convertible, with its roof down and through tunnels or thick forest roads, will give you the most unforgettable aural experience. 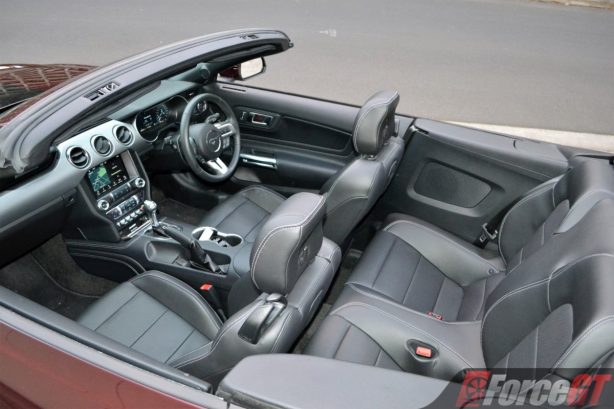 The new 10-speed automatic is very smooth and picks the right gear almost all the time. It can even jump across several ratios. Cruising at tenth, put your foot down and immediately fifth is selected, dropping the V8 right in the heat of the powerband and pining you to the seat. It can feel two ratios too many in slow moving city traffic as it’s almost constantly shuffling through the gears, but they are so closely stacked the shifts work discretely in the background.

Despite losing the roof, the convertible is some 100kg heavier than its coupe counterpart thanks to the extra chassis strengthening braces going on underneath the car. With the new update, Ford has further sharpened the underpinnings with revised dampers and a new cross-axis joint in the rear suspension.

The result is a car that is much more tied down and responsive to inputs than before. It’s noticeably less twitchy on the limit and the rear is much better controlled (no more ploughing into people at car meets thank goodness). It certainly feels a lot sharper than before. That said, you still feel all of its 1,840kg kerb weight, especially around tight bends, where turn in just isn’t as crisp as we’d hoped for.

If carving corners is your regular thing, the lighter and tauter coupe would be the more suitable car. Better still, if you’ve got $2750 to spare, you can option up the MagneRide dampers, which react to the road surface as much as 1000 times per second, giving you greater control at each corner.

Our test car did not come fitted with that option but it’s okay because the convertible is most at home on a stretch of winding coastal road, where it serves up truly relaxing and effortless open-top motoring. It’s a comfortable car in which to ride around town, too, with the suspension soaking up bumps and ruts nicely. 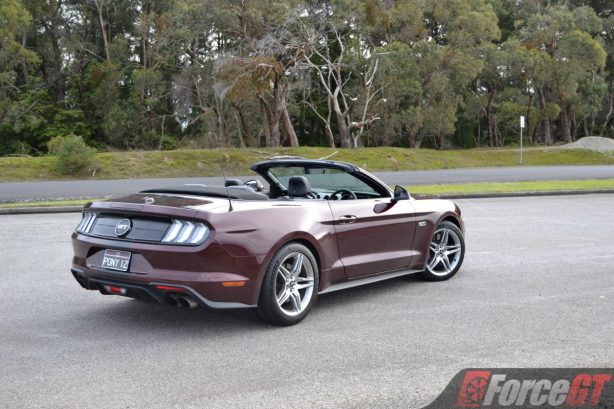 At the time of writing the 2018 Mustang has yet to be ANCAP tested, but it’s already benefiting from a vast array of driver-assist technology such as Autonomous Emergency Braking (AEB) with pedestrian detection, Adaptive Cruise Control, Lane-Departure Warning and Lane-Keeping Assist. All Mustangs also feature Auto-levelling headlights, as well as automatic high beam.

Ford has made all the right improvements to the 2018 Mustang. From that tweaked exterior and plusher cabin to the punchier V8 engine and tighter chassis, the Mustang still brings swags of kerb side appeal topped with great driving fun at an unbeatable price point.