Cars labelled Limited Edition usually struggle to get the pulse going, they’re often an outgoing model with some stickers slapped on and a different set of alloy wheels included in order to clear out old stock and make way for the inevitable replacement.

Not the 2018 Ford Focus RS Limited Edition, which brings real credibility to the label and comes just two years after the initial release. With only 500 available it truly is a limited edition. Not only that but Ford has packed in a whole slew of visual and mechanical upgrades to make the already special Focus RS something even more so. 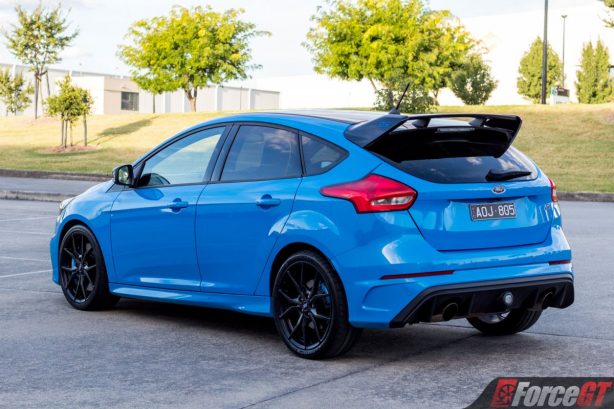 It’s not a big stretch to assume Conor McGregor came along and pummelled a Focus RS for ten rounds until it emerged black and blue inside and out, leaving us with the Limited Edition. Only available with Nitrous Blue paint no photo can do the final product justice, there’s a deep metallic glean that shines through with the right lighting which looks amazing in the flesh. Contrasting the paintwork and finished in black are the roof, spoiler and wheels which are assisted by the dark tint of the privacy glass fitted to the passenger and rear windows.

The Focus RS Limited Edition now finally looks as special as it feels and drives, bringing a lot of attention to itself no matter where your drive it. 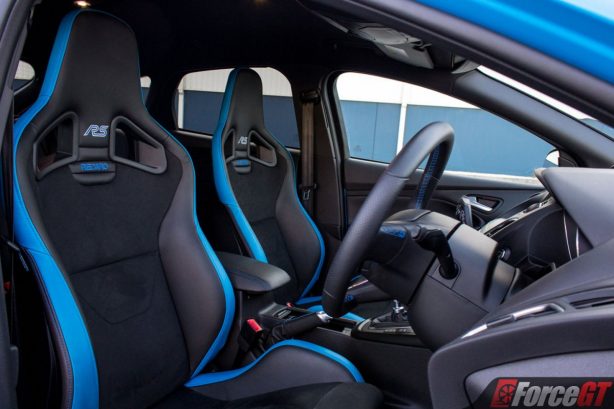 There’s no lack of black and blue bits on the inside either. The front bucket Recaros now sport blue highlights while the rear seats gain blue stitching and a Recaro logo mounted in the center just in case you forget. If you’re a short stocky bloke you’ll love the Recaros as they’ll grip you tightly and the higher seating position won’t be a problem. However, anyone on the taller thinner side will be wishing the buckets were more snug and packed with additional padding as you can never really fall back into them deeply enough for them to do their job.

Before I get onto the good stuff there’s still a few minor gripes to be mentioned such as the cruise control buttons being located awkwardly low on the wheel, lack of storage volume up front, dated looking infotainment interface, upside down wiper controls and finally the front seats can be a bit flimsy compared to other bucket seats.

If you’re considering a Focus RS or any other hot hatch the reality is you’re not going to care in the slightest about minor issues like these compared to the way it makes you feel and goes. 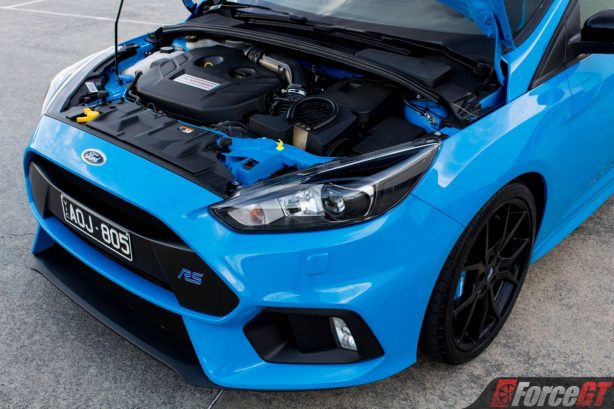 Some performance cars settle down and let you forget that they can rip your face off through the corners and crush your internals with brute acceleration, almost having a hidden alter ego that you have to unearth with some viscous driving, not so for the Focus RS. This thing antagonises you at every waking moment with the allure of its savage performance. The piped in induction note and crackling exhaust are a constant reminder that you’ve got a slab of power waiting to break free just inches under your right foot.

The 2.3-litre EcoBoost four cylinder turbocharged engine can pump out 257kW at a moment’s notice but the real story lies with the torque band: 440Nm starting at 1,600rpm and only dropping once you cross over 5,000rpm. Its power comes on strong at 2,500rpm and pulls all the way to redline with a satisfying rush as it comes on boost. There’s such a wide and usable power band that it’s almost impossible to keep the Focus RS off boost.

Opportunities to put the power down and make use of the launch mode will pop up constantly as the Focus RS seems to draw out an endless line of street racers looking for a drag when parked at the lights. 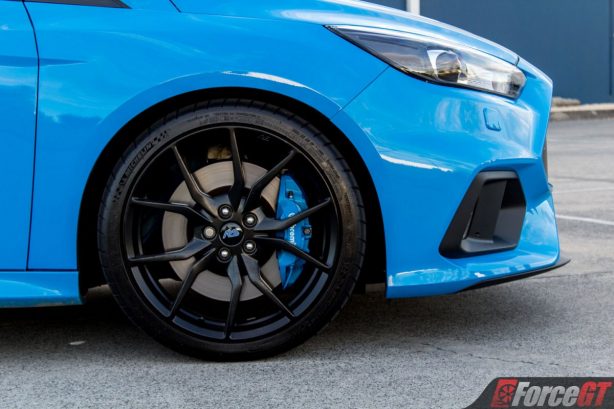 If you possess more willpower than I do, you’ll be able to drive like a saint and manage a respectable 8.1L/100km (claimed) of fuel economy. The best I was able to achieve was still acceptable 10.1L/100km with my responsible hat on. Put your boot into it and that figure will quickly rise up and drain the tank dry before you even have a chance to stomp on the Brembo brakes.

At only 52 litres of capacity you’ll be frequenting the petrol station far more often than expected but the smile on your face when you get there will make the journey worth it.

For a 4-cylinder engine, the EcoBoost is incredibly smooth and refined and the start stop function never noticeably intrudes. For many turbocharged engines, once they’re on boost the throttle morphs into an on/off switch with little control in between, with the Focus RS there’s a lot of accuracy to be had from delicate throttle inputs up high in the rev range which footwork purists will surely appreciate. 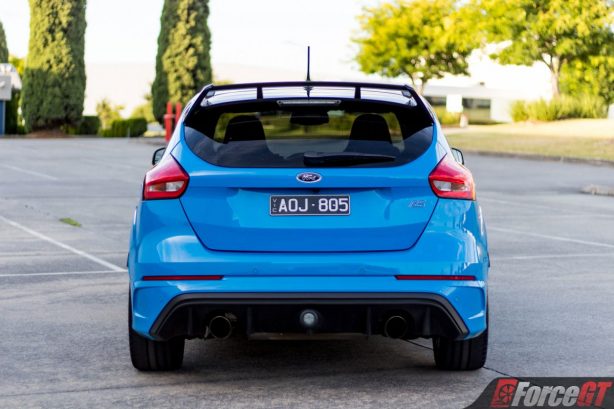 Perforated leather lines the D shaped sports steering wheel and provides a satisfying tactile feel through the fingertips and offers up a ton of road surface feedback through to the driver. Set the driving mode to Sport and it firms up even further but not so much that mid corner adjustments count as an upper body workout. You can be precise and accurate with your steering inputs to get the absolute most out of the AWD system, it works with you to get from point A to point B as fast as possible.

On paper the Focus RS Limited Edition clocks in at a solid 1575kg, making it more of a battle axe than a scalpel but driving it you’d swear it was far lighter and it’s all thanks to the technological black magic that the AWD system pulls off.

The turn in is sharp and without hesitation, once settled in mid corner the huge amount of grip from the Michelin Pilot Sport Cup 2’s allow you to hone in on the apex and once that’s done and dusted with you’ll have no problems getting the power down early with mountains of traction ready to sling you into the next corner. And the most astonishing talent hidden up Ford’s sleeve is just how easy it is to drive the Focus RS blisteringly fast. 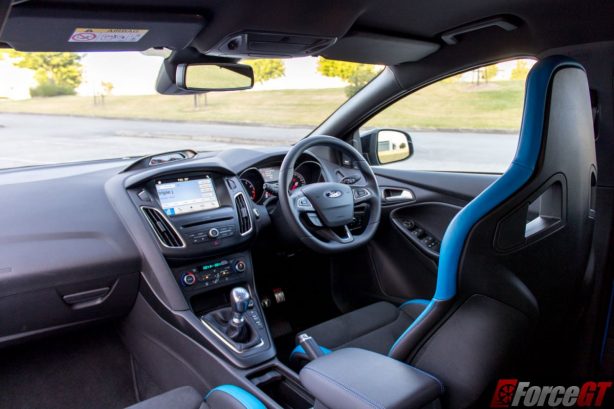 It’s the same story with the 6-speed manual gearbox (no automatic option here). Accurate and smooth with a springy feel to the synchros, you’ll have no excuse for ever missing a gear.

If I had to go through the car with a fine toothed comb and dig up something to complain about performance wise it’d be the brakes. They’ll pull you up to a stop from colossal speed without trouble, yet lack the same precision and feel that the steering and accelerator deliver. Put some temperature into them and it becomes apparent that the lines and fluid can’t take the heat when pushed and things become spongy.

Only available as an option in the previous model, the Focus RS Limited Edition comes equipped with a mechanical limited slip differential up front which on smooth roads or track surfaces gives even better pull out of corners to make the most of the AWD system. Get it on bumpy B roads and you’ll find the car starts to fight back with torque steer higher up in the power band, you’ve really got to be focused to keep everything straight as the speed piles on. 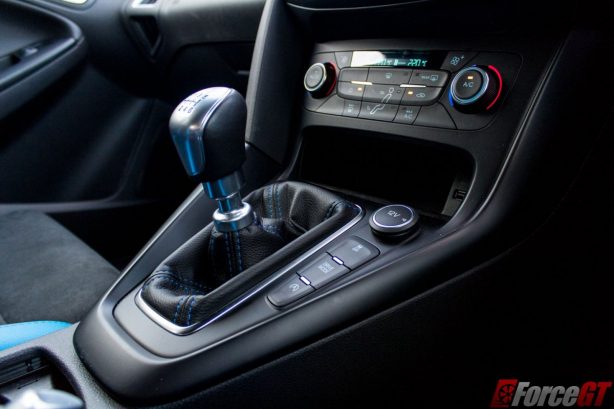 You’ve got to love how unapologetically performance orientated the Focus RS Limited Edition is. There’s little to no compromise getting in the way of the pursuit of even more speed. The ride is harsh in normal mode and unforgiving in sport mode. You won’t be able to escape any bump or dip no matter how small it is and long trips will require a stop off at your chiropractor of choice to rebuild your spine back into working order. A functioning spine is overrated when you can strike fear and doubt into Golf R owners and AMG A45 owners alike. 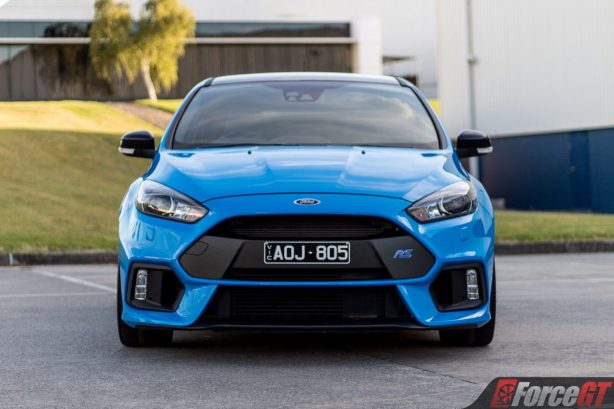 To keep the price within reach Ford has omitted some kit found in other variations of the Focus but what they’ve left in will keep you happy for sure. Directional Bi-Xenon HID headlights stand out as the most impressive feature with the 9 speaker stereo not far behind. The entire spectrum of audio technology is included with the CD player, auxiliary, bluetooth, Android Auto/Apple CarPlay and finally DAB+ digital radio all available to you.

Safety spec has been bumped up thanks to the included Autonomous Emergency Braking that Ford label Active City Stop so you’ll be able to convince the wife that yes, it’s safe for the family too. 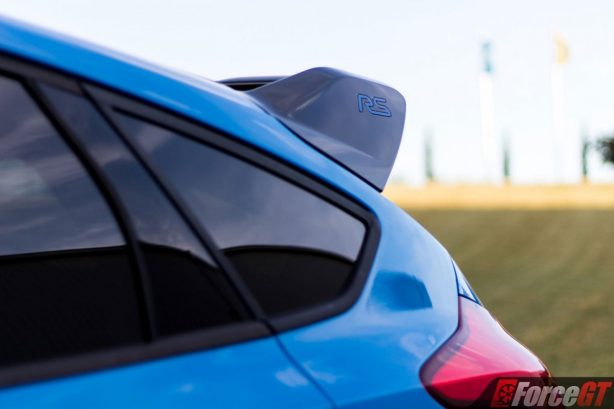 Overall I was blown away by how much character Ford has infused into the Focus RS. It feels raw and alive and never lets you forget it. Every single time you drop down into those Recaro bucket seats you can’t help but know that you’ve got your hands on something that’s going to remain special for years.