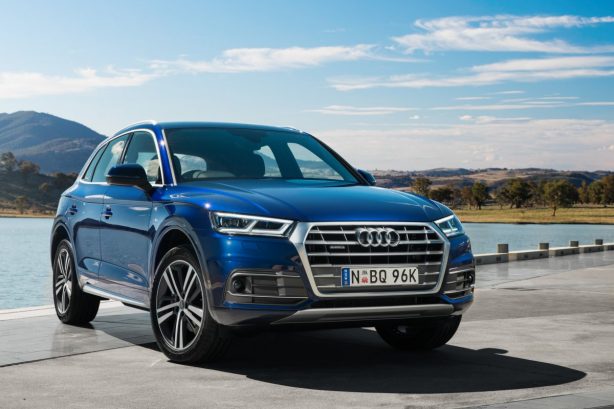 The original Audi Q5 was Ingolstadt’s biggest success story in recent times. When it was first introduced in 2011, it ruled the segment with runaway sales figures in all major world markets. It went on to become Audi’s best selling model in the backdrop of a booming premium compact SUV market.

That being said, the first-gen Q5 had it easy with just the BMW X3 and Land Rover Freelander to call rivals. Its successor, the all-new 2018 Audi Q5, now faces a slew of new rivals. Along with the X3, Mercedes-Benz’s hot selling GLC-Class is eyeing for a big slice of the cake. Land Rover has replaced the Freelander with an even stronger player, the Discovery Sport. And there’s never been a more aggressive assault from Volvo with the highly capable new-generation XC60.

Let’s also not forget about the increasingly popular Lexus NX and the soon-to-be-released Alfa Romeo Stelvio. 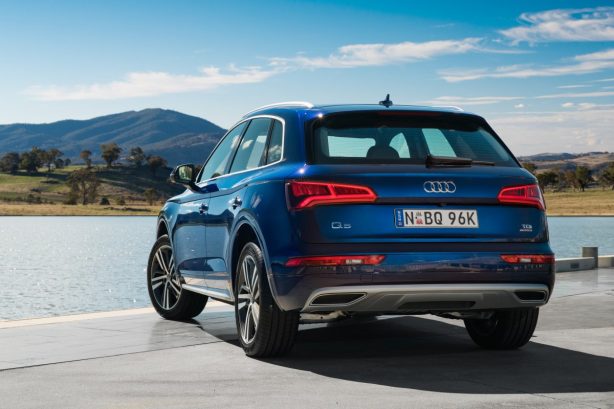 In Australia, the new Q5 is available as a four tier range spearheaded by the Q5 2.0 TDI Quattro Design from $65,900 plus on-road costs, a hike of $2300 over the outgoing base variant.

Can the new Audi Q5 defend its crown in this tightly contested segment? Let’s find out.

Taking a sportier and tauter approach to design, the new Q5 boasts the brand’s now familiar flared singleframe grille flanked by edgier headlights at the front. Distinctively curved and sharper shoulder line at the side (resembling that of the latest A5 coupe) convey a more muscular stance, while the rear is similarly more angular.

In typical Audi shades of restraint, the new styling is inherently less adventurous than rivals but still suitably classy, modern and upmarket. 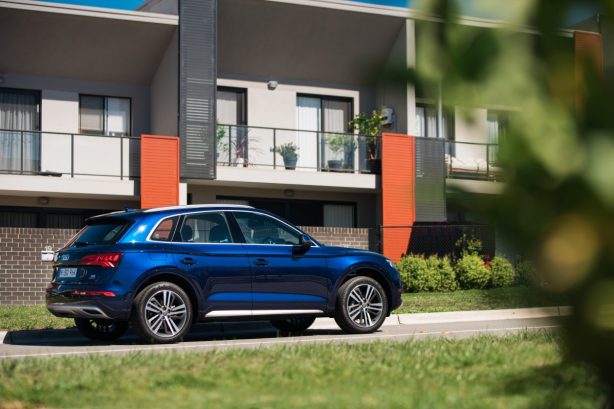 At 4.66 metres long, 1.89 metres wide and 1.66 metres tall with a 2.82 metre wheelbase, the new Q5 has grown in nearly all of its dimensions compared to the previous model. Despite the grown in size, the new SUV is up to 90kg lighter (depending on variant) than its predecessor thanks to extensive use of aluminium and high tensile strength steel in its body.

Inside, the new Q5 offers more space, with cargo capacity grown by 10 litres to 610 litres. With the rear bench folded down, this volume expands to a sizable 1,550 litres. The cabin can accommodate five adults in comfort with excellent headroom and legroom all around. Sitting position is good as is all-round visibility.

The dashboard is pretty much lifted straight from the current-gen Audi A4, which is rather a good thing as it’s contemporary and functional with spot-on ergonomics. There’s no excessiveness in the cabin; everything is sized just right, giving a sense of spaciousness throughout.

Audi’s brilliant Virtual Cockpit makes its debut in the Q5, dispensing driving information through a high-resolution 12.3-inch screen in place of a conventional instrumentation cluster. 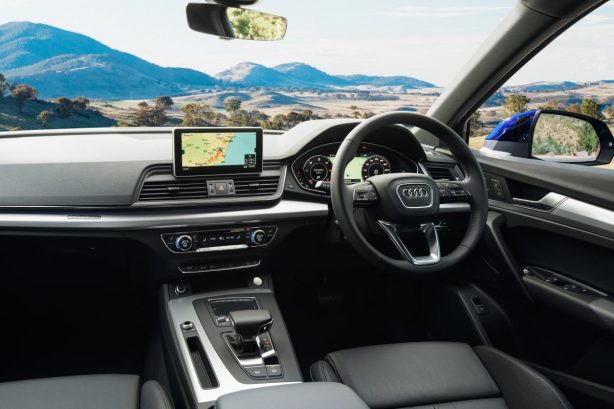 With that strong 400Nm of torque available low in rev range, acceleration is effortless if not punchy, with minimal turbo lag. The sprint from 0 to 100km/h is covered in a swift 7.9 seconds (claimed), making the Q5 a relaxing cruiser both in urban settings and on open roads.

Engine operation is impressively refined and quiet; there’s virtually no diesel clatter in the cabin. Rolling off the line however, there’s still a slight moment of hesitation from the 7-speed S tronic dual clutch automatic gearbox but once on the go, the drivetrain is creamy buttery smooth with imperceptible gear changes. The auto idle stop start is quite the opposite though, sending unpleasant jolt into the cabin each time the engine resumes. 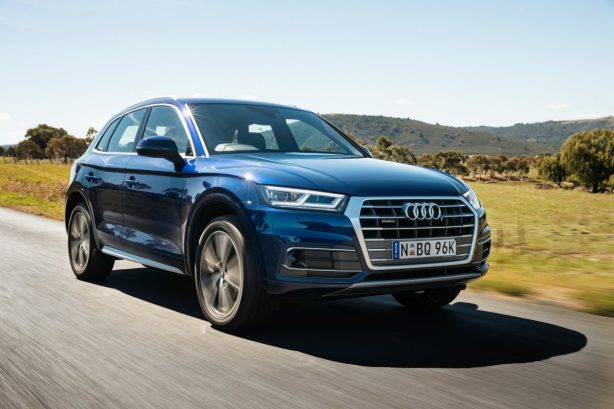 The standard adaptive radar cruise control is never abrupt in braking and accelerating. While some other systems we tested race to maintain the set distance from the vehicle in front at the expense of smooth operation, the Q5 is never nervous, positioning itself gently and gradually.

With reduced weight, the Q5’s handling is neat and tidy through corners with excellent body control and roll suppression. It’s a tall vehicle and you will feel it, but it drives like a much smaller car. Quattro all-wheel drive further adds assurance with impressive traction dry or wet.

The steering is smooth and easy, with variable weightage depending on the driving mode selected. It points precisely but feedback from the road is vague at best, zapping driving involvement. We also find the brake pedal position a little too high, making smooth braking a delicate affair.

The suspension does a fine job of soaking up bumps and ruts. Around town road undulations are absorbed with great stability and on long drives it’s just supremely comfortable. 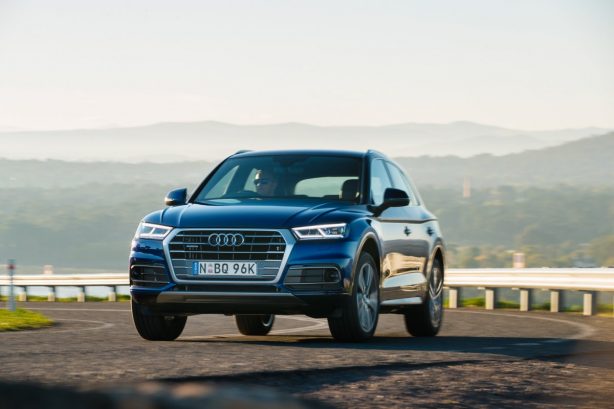 The Q5 is bathed in typical Audi build precision and excellence with top class fit and finish. Swathe of brushed aluminium trim adorn the cabin, complemented with lavish leather upholstery. Interior materials are first rate in most other areas, only let down by those rather plasticky door grabs. 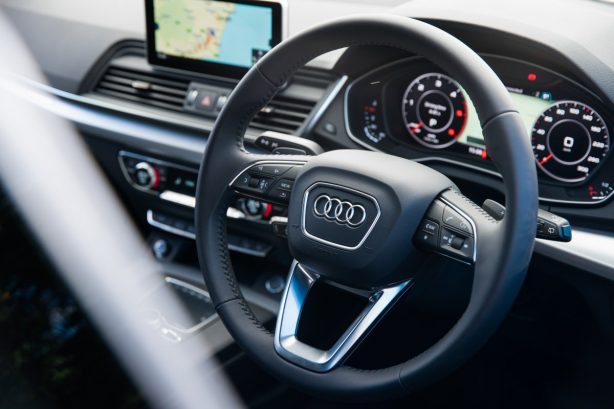 Audi claims the Q5 TDI consumes as low as 5.5L/100km on the combined cycle thanks to a lighter body and more efficient engine.

At the end of our week long test the trip computer returned a reading of 7.6L/100km, which admittedly involved some heavy-footed driving. For a near two-tonne SUV, it’s a pretty remarkable figure.

Cruising at legal freeway speeds the Q5’s fuel use hovered around 4.5L/100km, which almost matches some hybrid SUVs.

Beyond this the options list is extensive and expensive. And piling on a few essentials such as heated seats, metallic paint and comfort package will see the price of your Q5 soar rapidly to above $80k.

The new Audi Q5 has improved in every aspect compared to its predecessor. Riding on an all-new platform that is lighter and stronger, the new Q5 impresses with its efficient and refined drivetrain, spacious interior and exemplary ride comfort and quietness. The competition has definitely closed in on the Audi, some even surpassed it in certain areas, but for an all-round appeal, it’s hard to look past the new Q5.