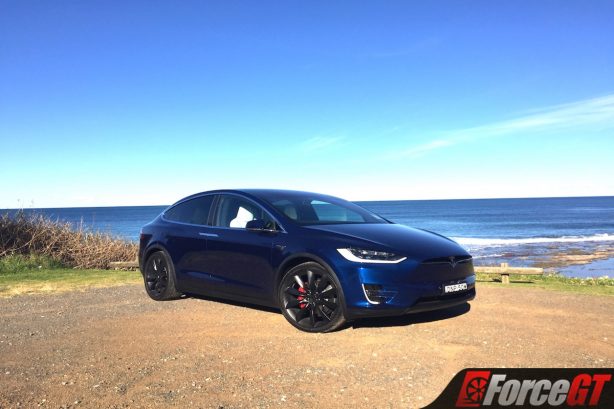 There are not many cars on the road today that comes with the coolness and Wow factor of a Tesla Model X. Yes, subjectively, it may not be the best looking car on the road, looking more like an oversized hatch (and a slightly awkward one at that) rather than a sporty, high-riding wagon.

But its supercar bashing acceleration (0-100km/h in 3.1 seconds), ice cap-friendly electric propulsion and tech-laden cabin makes it one of the coolest cars money can buy today.

And the good news is, you don’t even have to compromise on practicality and everyday usability. We already found it handles decently (read our test drive review here) and on a full charge – which takes around 50 minutes using a high-voltage Supercharger – the Model X’s 100kWh batteries have enough electrons to take you on a 565km journey in absolute silent comfort.

But while these are great, the Model X is also packed with cool features that impress the neighbours. So, what is so cool about the Model X? Here’s a list of top 10 coolest features: 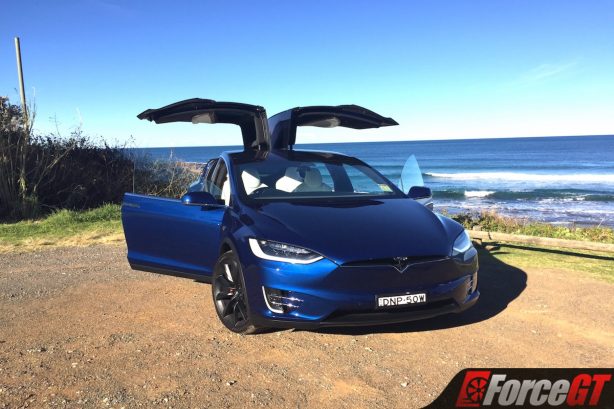 First of all, who can ignore those massive falcon doors that open like a pair of ….err, giant falcon wings. Pop them open by the road, in the car park or just about anywhere and you’ll be an instant superstar.

And the clever bit about the doors is that they have proximity sensors that adjust how high or wide they open to protect themselves. For example, when the dude with a beard parks his 1990 Honda Civic just inches from your Model X in the Ikea car park, the door will fold itself up and open higher instead of spreading out. 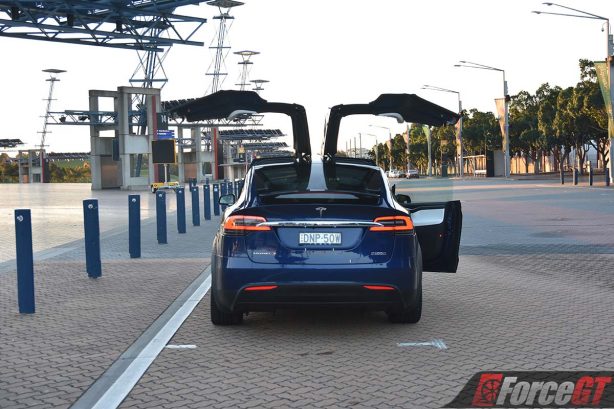 If you are carrying the key fob, the driver’s door will automatically swing open for you. Handy because… well, it’s just icky to have to open your own door, right? And once you’re settled in those ultra comfortable, leather wrapped front seats, just put your foot on the brake pedal and the door will close automatically and the car turns itself on. Magical! 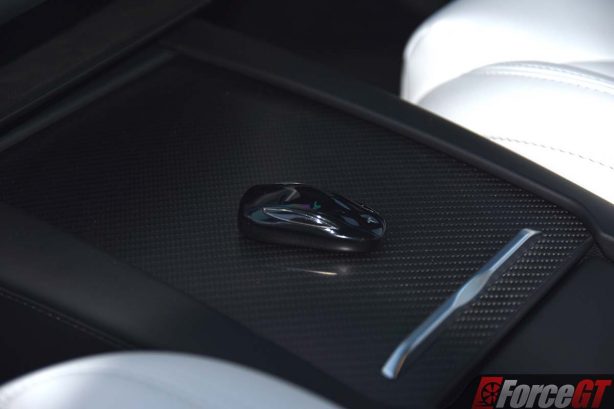 The car’s key fob is shaped like a concept version of the Tesla Model S, and it’s small and light enough to leave plenty of space in your pocket for other important stuff; like the giant Display Key of your BMW 7 Series.

But the coolest thing about the Tesla’s key is that you can remotely open those falcon doors! Ooo… ahh! 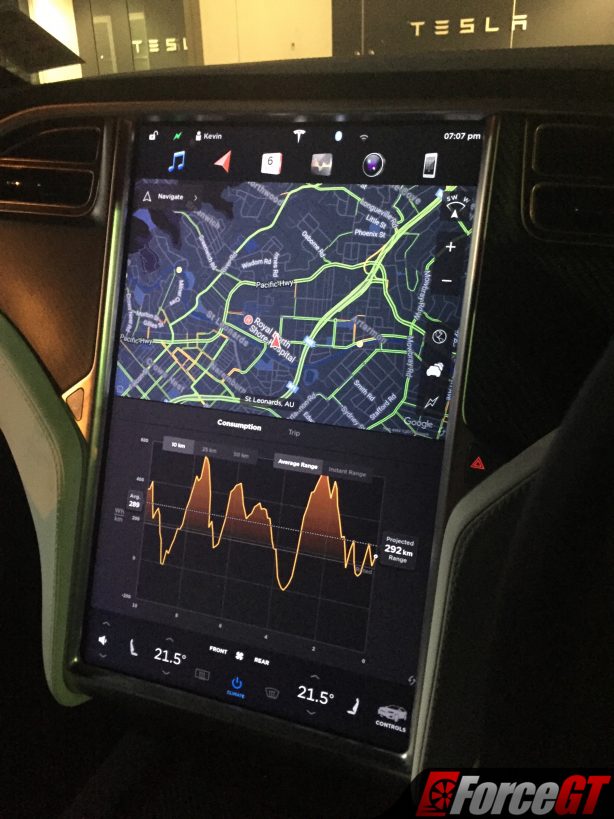 And while we’re on the subject of big things, Tesla’s ludicrously large touchscreen is the command centre for everything because buttons are just so last century. It not only shames any tablets with its size (17-inch) but rivals them in its display crispness and response and user friendliness.

It is also permanently connected to the Internet via a built-in sim card. Maps are displayed with the help of Google Maps, which will reroute your car away from traffic hot spots automatically in real time.

Your Model X will always be up-to-date because the car’s software is updated wirelessly, just like your smartphone. What’s more, you can also surf the net and even book a restaurant without having to leave your car! 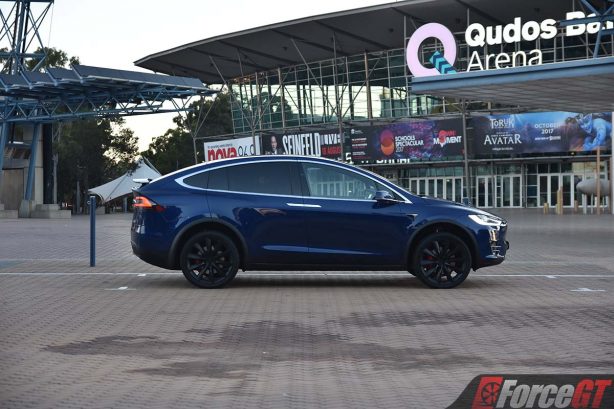 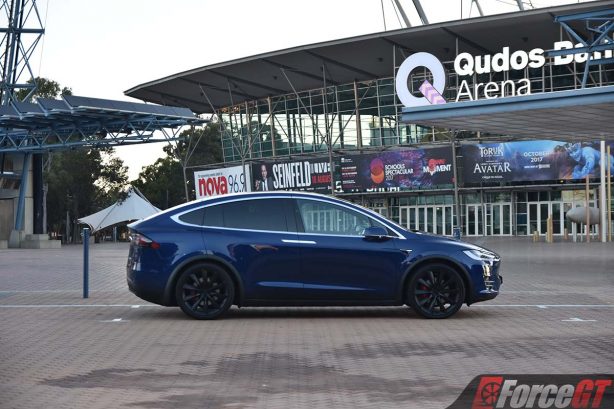 The Model X’s ride is height adjustable. It’s an SUV after all, so if you decide to take it off road; such as onto the median strip because you can’t be bothered waiting for the car in front to move forward so you can turn right at the lights, just bring up the suspension setting on the touchscreen and off you go!

On the other hand, you can also turn your Model X into a hyper hatch by dropping it to the ‘Very Low’ setting for a hunkered down stance.

The car’s charging port pops open automatically when the charging cable is pointed at it, and shuts closed when you remove the cable. 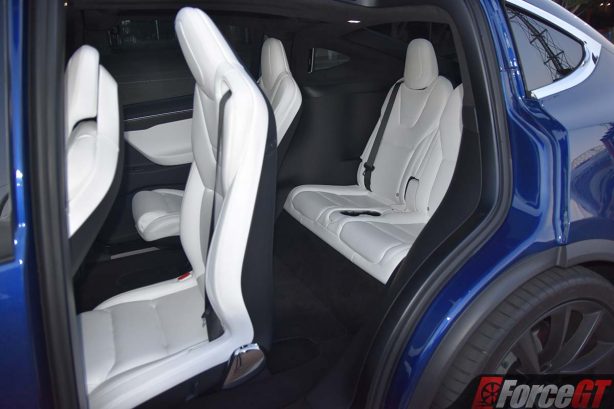 When configured as a six or seven seater, the second row of seats moves forward at the touch of a button to allow easy access to the third-row. And because of those falcon doors, passengers can actually walk into the third-row without having to fold themselves up. 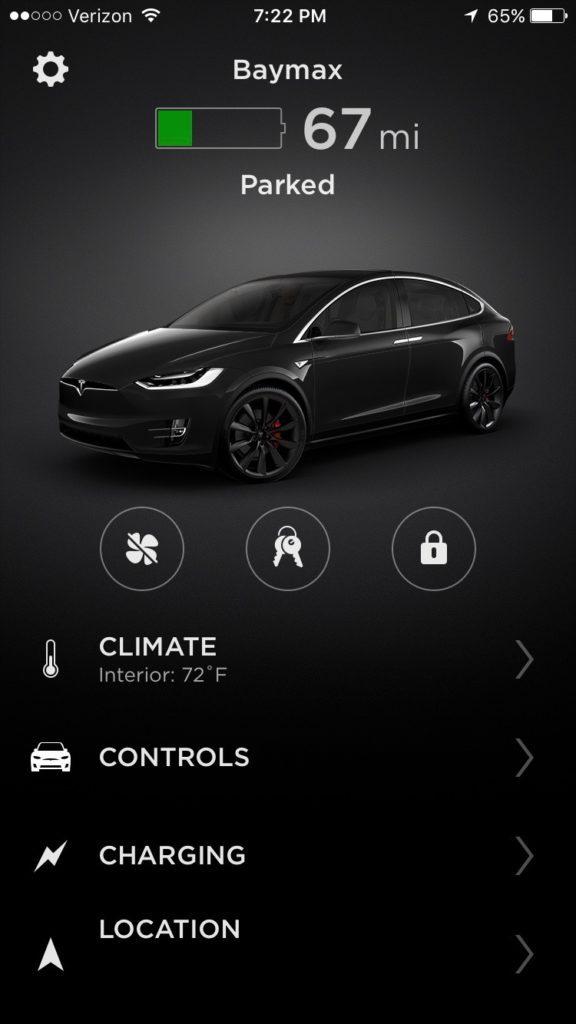 The Tesla mobile app lets your check up on your Model X anywhere in the world as long as you’re connected to the internet. It even allows you to pre-cool or heat your car, flash the headlights, sound the horn, lock/unlock the car, check on its charge status and even where your car is. Great for snooping on your partner!

Finally, there’s the Ludicrous mode! And it’s faassst! Insanely fast! It’s acceleration is so brutal you’ll be pinned to the chair on full blast and induces instant giggles with the kids.