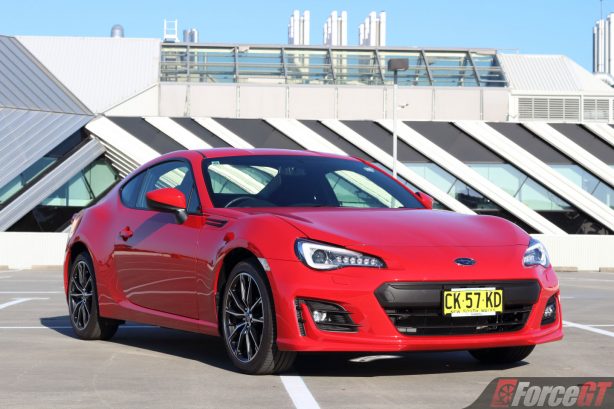 Back in 2012 motoring enthusiasts the world over were overjoyed with the release of both the Subaru BRZ and Toyota 86. Finally, an affordable rear-wheel drive two door coupe had hit the market and it sold like hotcakes. Now 5 years later the facelifted models have hit showrooms loaded with improvements for a very critical customer base and we’re keen to see what the updated 2017 Subaru BRZ is bringing to the table.

Between the outgoing model and the new model you’d be hard pressed to notice any major visual changes at a glance. A longer inspection reveals a new headlight design and front facia with a molded wing leading into the fog light opening. It’s busier and more angular than before without departing too far from the original design.

The front quarter panel guard vents have had a visual change and underneath sits a more aggressive set of twin five spoke 17-inch alloy wheels. Rounding out the external changes are a shark fin antenna on the roof and updated rear taillights.

The original BRZ body was a case of form following function giving us big wheel arches and pumped guards. The body almost shrink wrapped over the underlying mechanicals and it’s good to see the same principal holds true for the refreshed model. 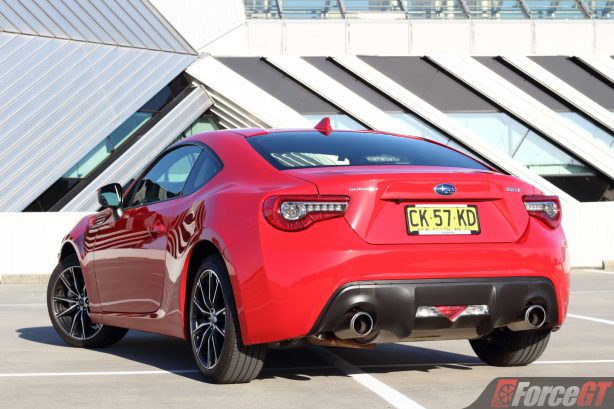 The changes continue on the inside with a number of usability improvements and material changes. Now when gripping the wheel your thumbs can take a break from twiddling and enjoy the selection of media, phone and trip control buttons to push.

Beyond the wheel sits a revised gauge cluster though the speedometer is still as useless as ever before thanks to the small gaps between the daily driven speeds. The right hand side though has benefited from a newly added display that you can toggle through to show:

Of these I was most excited to check out the G force meter but it looks like the lawyers have had their way with Subaru and castrated the system. As soon as the car detects movement the G display switches off and becomes unavailable bringing up the torque and power curve display instead, so why bother adding it at all?

The torque and power curve display is an interesting addition that highlights a major issue that should have been solved in the new model, the lack of mid range torque. The display clearly shows the torque dip from about 3,500rpm through to 4,500rpm that was so heavily criticised in the earlier model.

Gone is the huge slab of hard plastic on the passenger side dash and in its place sits a more appealing stitched leather cover to match the door and center console trims.

The BRZ now comes loaded with a decent infotainment touch display at 6.2-inch connected to 6 speakers and delivers a decent audio experience for those that may not be a fan of the induction noise that’s piped into the cabin.

To date only the infotainment unit in the new Subaru Impreza comes equipped with Android Auto and Apple CarPlay and disappointingly the BRZ misses out. 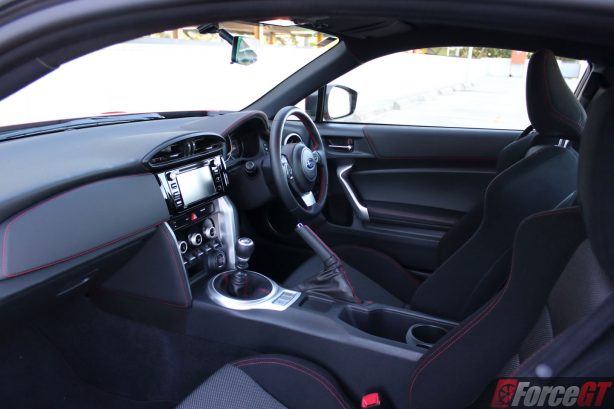 The seats are very impressive providing great support when cornering hard and comfort for longer trips. The driving position is also spot on and easy to find with the manual seat adjustments, but you’d expect that as the first model also nailed this and was praised for it.

With such a great driving position I was looking forward to some heel and toe action yet my hopes were dashed upon discovering how firm the brake pedal was. You can still heel and toe your downshifts, it just requires a little extra effort and force to pull off.

The rear seats though, well you can technically fit two adults in there but it’s going to be extremely cramped for everyone, I had to adjust the driver’s seat just so one of my passengers could get some blood flow to his legs and I’m glad to report they still work after the short stint in the back of the BRZ.

The wheel mounted controls were adequate but the wheel used in the latest Impreza is of a higher quality and I’d have expected similar for the revised BRZ. Something odd for a driver orientated car is the stalk mounted cruise controls, it’s easy to operate and use but if dialing on lock for heavy oversteer occurs it may get in the way when grabbing the wheel again, wheel mounted controls would have been a vast improvement here.

Everything else though was built to a high quality and the frameless rear view mirror is very cool. When you factor in the price of the BRZ it’s easy to see that some cost cutting has occurred but nothing important regarding performance has been sacrificed and I commend Subaru for this. 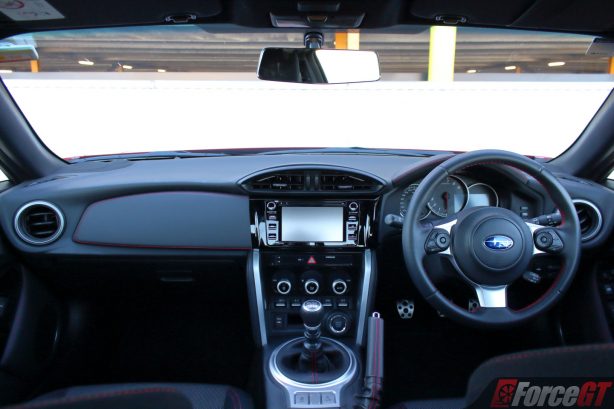 Exterior and interior improvements aside, how does the 2017 BRZ drive? There’s now more power on tap from the 2.0-litre atmospheric four-cylinder boxer engine for a total of 152kW @ 7,000rpm and 212Nm @ 6,400 rpm, a marginal bump from the previous 147kW and 205Nm. The flat four is paired with a six-speed manual transmission. An automatic gearbox is also available.

Some journalists complain that the BRZ is still lacking power but that’s not the case. There’s more than enough power to have plenty of fun, which is what the BRZ is all about. If anything I’d be happy to sacrifice some top end power for more midrange torque, sadly as mentioned earlier, the torque dip still sits right in the middle of the power band. It’s noticeable when shifting up early as you’ll fall right into the valley of no torque and have to play the waiting game as you climb your way out of it.

That said, at low revs the engine is very driveable and at high revs it’s a joy to bring right to the 7400rpm redline. Those with mechanical sympathy might not enjoy being forced to redline the motor constantly but it feels right at home high in the rev range and makes a great noise the whole way through. 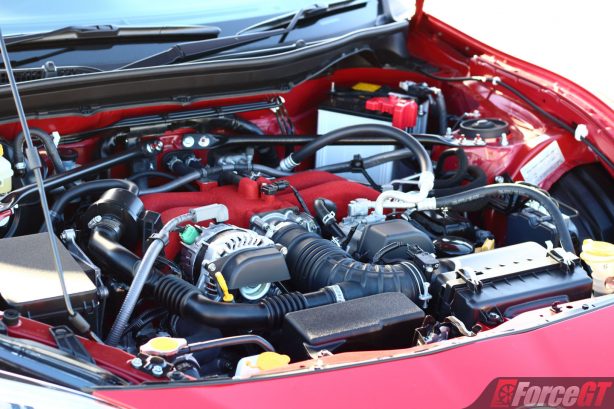 Subaru has introduced a 4.3:1 final drive to the BRZ which sacrifices the 0-100kmh time slightly to the advantage of much improved gearing all round. Even with the higher ratio final drive the gearing still feels long and at times third can feel particularly so.

Braking performance on the BRZ is up to scratch however pedal feel is firm making minute braking adjustments more difficult than need be and heel toe movements are harder to pull off.

Subaru claims the BRZ can deliver 8.4L/100km on the average combined fuel economy and their estimation isn’t far off from our real world test, as I was able to get 9.1L/100km with a rather heavy foot throughout my week long test. For a naturally aspirated 2 litre that is power orientated the economy is going to take a hit but this is quite livable and won’t break the bank.

The Subaru BRZ’s greatest strength is easily its handling performance. The chassis is rigid and stiff giving the driver great confidence and all important feedback. Thanks to the snug seats you’ll feel everything the chassis is doing when cornering forces start to pile on. With traction control on everything is quite tame when being pushed, it’s only once disabled or race mode is engaged that everything livens up. The rear end starts to dance around with a hint of oversteer through the corners and is easily managed thanks to the torsen LSD, it builds up progressively rather than the snap oversteer found in some cars.

The fitted Michelin Primacy HP tyres have enough grip to have fun and when pushed hard grip breaks away progressively. They’re a good fit for the car though keen drivers will want something stickier. 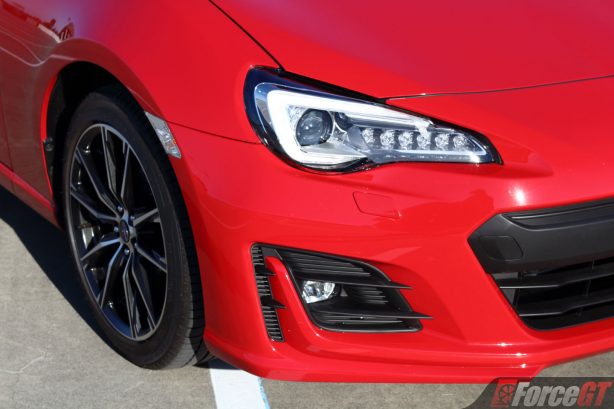 The turn in is as crisp and responsive as ever and body roll is kept low thanks to stiffer sway bars, while adjustments mid corner are intuitive and easy to make without upsetting the rest of the car. The BRZ is a very neutrally balanced car that doesn’t oversteer or understeer unless you force it to. It’s a car that teaches you the fundamentals of driving a car fast, smooth driving and shifting the weight, and that’s why it’s so rewarding to drive.

The induction noise pipe that’s connected to the cabin is a point of polarisation for many drivers though I had no issues with it, as the increased induction noise assists with shifting up through the gears. Get it wrong and you’ll go from peak power to the mid range torque valley and you’ll be thrown forward into your seat.

Gear shifts in the BRZ are short and stubby with a mild mechanical feel but second can feel notchy at times, a trait carried over from the old model. The clutch is extremely easy to operate with a large slip zone and light pedal feel grabbing not too high or low. 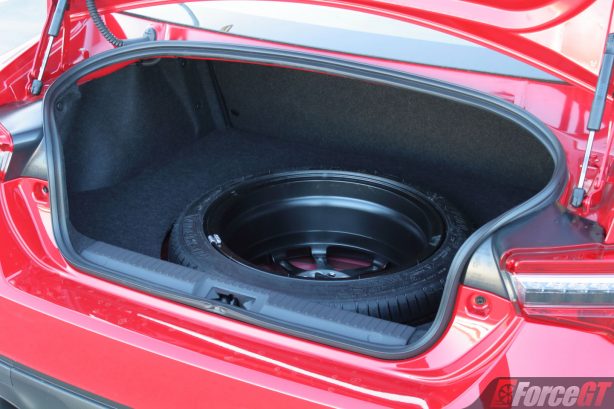 The BRZ isn’t a feature packed car but you do get a few nice toys to play with when you’re not enjoying the great driving experience it delivers. The main features are:

And safety is covered by:

Subaru has pulled off a respectable refresh with improvements that add to the overall quality and usability as well as driving experience of the BRZ.

The updated BRZ comes in at $32,990 plus on road costs and this is an absolute steal for a car that is guaranteed to put a grin on your face and adrenaline in your veins. To put that into perspective, when originally launched in 2012 the BRZ was retailed for $37,150, factor 5 years of inflation and the lower price of the 2017 model and it’s hard not to be impressed with the latest offering from Subaru.