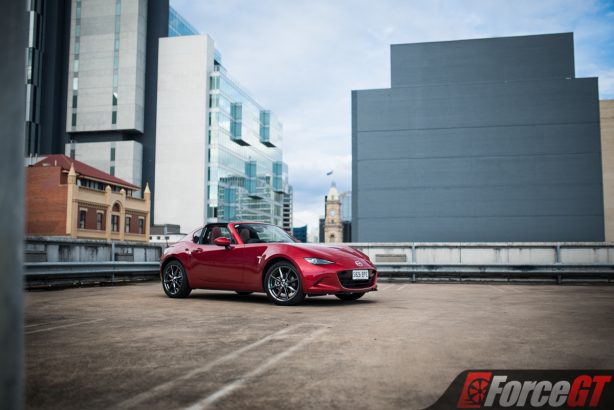 The last time I drove Mazda’s latest incarnation of the MX-5 I was treated to the top-spec GT model in the classic roadster manual configuration. Now it’s time to get behind the wheel of the base spec RF model in both manual and automatic configurations.

The very thought of placing an automatic into any MX-5 is considered utter blasphemy by many. And yet the MX-5 like so many other performance cars does offer an optional automatic that will make up a good portion of total sales, so just how much fun can an automatic MX-5 be?

The RF stands for Retractable Fastback and with the roof up or down it’s a solid upgrade over the roadster model visually. Both variations look amazing from a variety of angles however the RF has that extra ounce of poise and aggressiveness that you’d expect in a coupe. Roof down with the windows up is my personal recommendation to get the most out of the RF, even more so on a cold clear night with the heater blasting away. From the inside with the roof up there’s an extra feeling of both security and safety from the hard topped roof not found in the roadster. 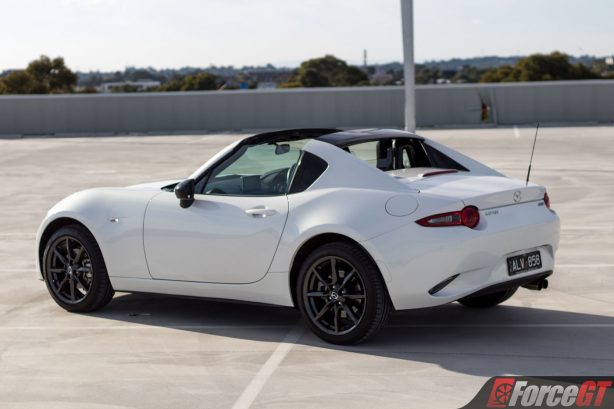 It’s not all praise and glory for the RF though, the RF models come in at around $4,000 more than their soft topped siblings which is a sizable chunk of change. The real cost for the RF is the lack of rear visibility caused by the roof supports. The roadster does have rear visibility issues with the roof up, too, however the RF suffers this trait 24/7. The fitment of standard Blind Spot Monitoring does alleviate the problem to some extent, though a little mirror mounted lights are no replacement for visual situational awareness. 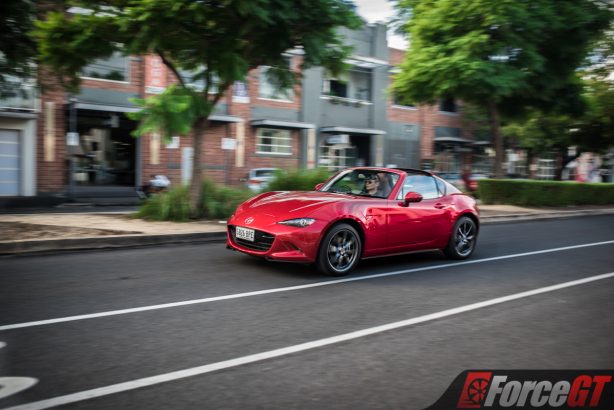 The RF does also have increased wind noise which is hardly worth mentioning given that no one buys an MX-5 for absolute refinement, the complete opposite is true. The MX-5 is the car you buy to truly absorb your surroundings as you drive through them, wind blasting through your hair and exhaust note reverberating the senses. Come to think of it, all that marketing talk of ‘Jinba Ittai’ about the oneness of horse and rider does have some merit to it after all.

One area where the RF is definitely slower than the roadster is how rapidly you can drop the top, the roadster can go from top to drop in mere seconds while the RF’s electrically operated roof does take a decent portion of time to complete the procedure (about 10 seconds). 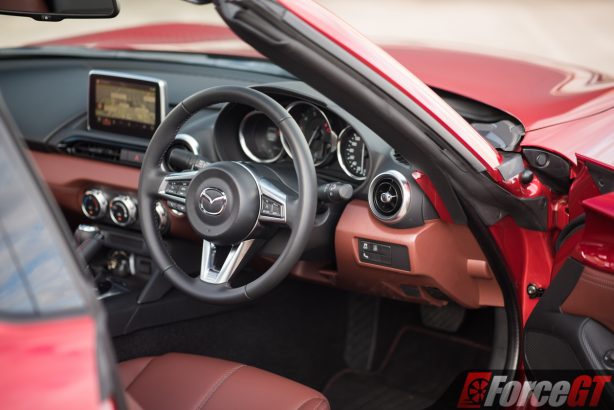 There’s also an extra 49kg of weight that comes with the RF making all 118kW from the 2.0-litre engine work harder to haul the car around. The real question is just how noticeable is the extra weight? The answer, barely. Honestly, driving both cars back to back they feel close to identical performance wise. In a straight line the MX-5 RF still revs crisply right up to the 6,800rpm limit and through the bends that extra weight isn’t going to be the limiting factor of your fun, as with the roadster it’ll be the lack of support from the seats that halt your enjoyment from reaching ever higher levels. You can read more about the driving feel and experience in our MX-5 Roadster 2.0-litre review here. 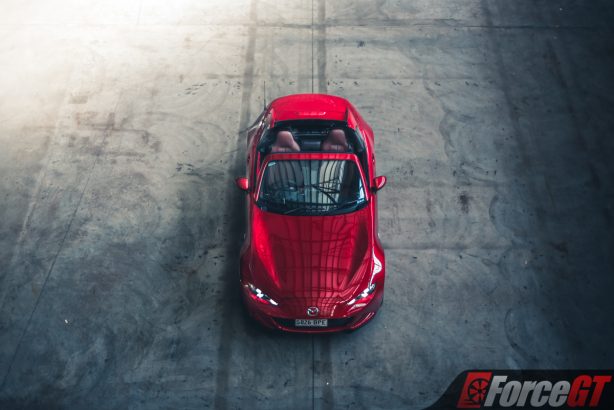 Surely it’d be the automatic gearbox that hampers the MX-5’s ability to put a smile on your dial, never providing the same thrilling experience a proper manual box could. Having driven both the manual and automatic versions through the same stretch of twisty roads I was surprised with just how good the automatic was in comparison. Mazda have definitely optimised the automatic gearbox to provide quick rapid shifts and more importantly hold gear even when pushed to the rev limiter.

You’re provided multiple options of swapping cogs with a sequential gear stick or paddles at your disposal, each with their own advantages. The paddles work great for focused driving, your hands never leaving the wheel, yet some situations call for gear changes mid corner in which case the sequential stick shift mode comes into its own. 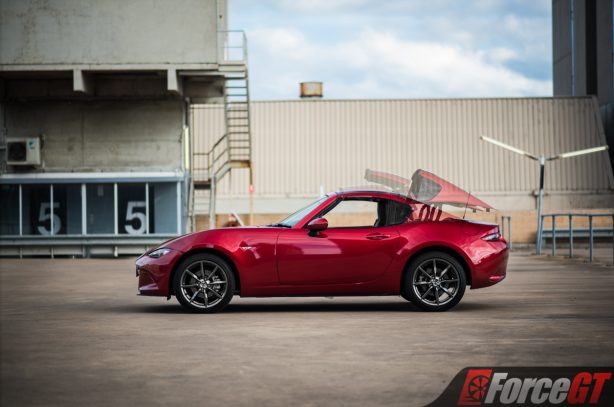 Could you take an automatic MX-5 to the track and enjoy yourself? Absolutely! You won’t get the exact same raw experience the manual model offers but the automatic won’t rain on your parade that’s for sure. Once your adrenaline fix is complete you can switch off the sport shift mode and lob the gearbox back into the traditional D drive mode to cruise about to your hearts content in comfort.

Mazda’s effort to make the automatic gearbox as manual like as possible shows that they care about providing an exciting driving experience to all their customers. It’d be nice to have the option to shift into reverse with the paddles too but what they’ve achieved is still rather impressive.

Fuel economy for the MX-5 will largely come down to how it’s driven, it’s the price you pay for a few extra thrills day to day. I managed an acceptable figure of 8.2L/100km for the manual and 8.7L/100km for the auto where Mazda claims 7.0L/100km and 7.4L/100km respectively. 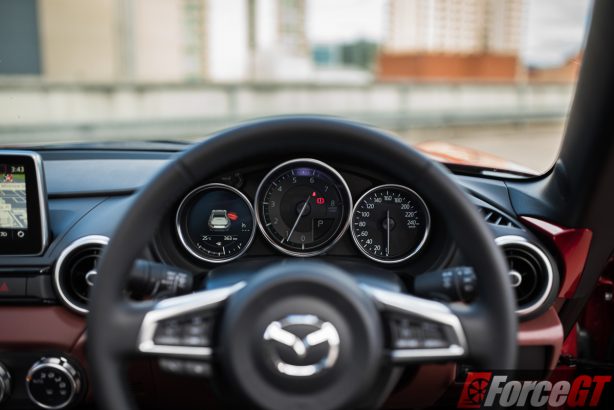 In base spec the MX-5 RF still comes quite well equipped, the MZD connect system with sat-nav makes a return which is as brilliant as ever though lacking Android Auto and Apple CarPlay. Unfortunately, the set of speakers connected to it have taken a step down and only produce average audio compared to the premium Bose system found in GT trim.

While the cloth trimmed seats don’t look or feel as nice as the leather heated seats found in the GT, they do offer good comfort but still suffer from a lack of shoulder support.

In an effort to mitigate the reduced visibility of the RF, Mazda has included both Blind Spot Monitoring and Rear Cross Traffic Alert as standard and you’ll still have the reverse camera to rely on. The only feature not found in the base spec RF that I missed from GT spec was keyless entry. Overall, Mazda has added relevant features where needed while keeping the price in consideration. 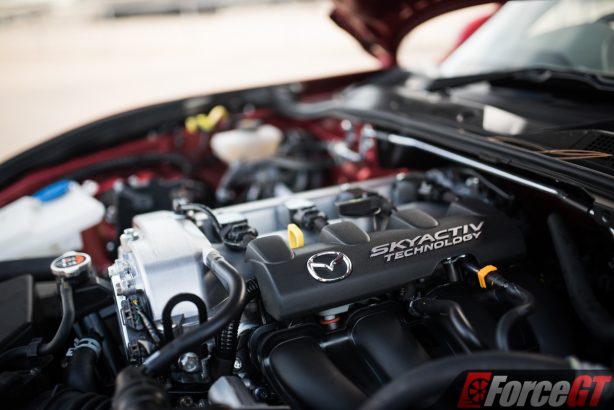 There’s quite a few configurations available for MX-5 drivers to be and right now it all comes down to what you prioritise in a car. The RF ticks the box for those wanting killer looks plus convenience and is a treat in both automatic and manual configurations.

The base spec we tested still comes well equipped and feels like a complete car rather than a stripped down GT. It retains all the important features like large wheels with sticky rubber and LSD with enough modern creature comforts while keeping the price in check.

I’d still recommend buyers to be try out both the 1.5-litre or 2.0-litre Roadster and 2.0-litre RF on a back to back test drive prior to making this difficult decision, either way you go you’ll be making a great choice.

Ahead of its early 2020 arrival, Mazda Australia has released local specifications and pricing for …