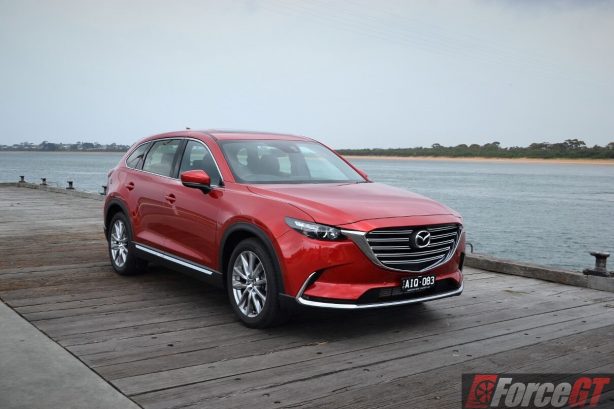 Up until the arrival of the second generation Mazda CX-9, there wasn’t a car in the mainstream seven seater SUV segment that I would describe as beautiful. The 2017 Mazda CX-9 though, deserves that praise in every single way. I mean just look at it. The curves, the lines and the proportions are just spot on. There is no shortage of fine details either, like the polished chrome garnish in the lower front and rear bumpers, and the striking design of the daytime running lights. In the upper spec variants, this car can easily flirt with the premium segment, which costs almost twice as much.

Available in four grades for the first time, the new CX-9 range kicks off with the $42,490 plus on-road costs Sport variant and stretches to $63,390 plus ORCs for the flagship Azami. In between, the mid-spec $48,890 plus ORCs Touring is expected to be the most popular model, while the high-grade GT is essentially an Azami with a trimmed safety package to bring price down to $57,390 plus ORCs. Like before, all variants can be specified in either front-wheel or all-wheel drive, the latter a $4,000 premium. 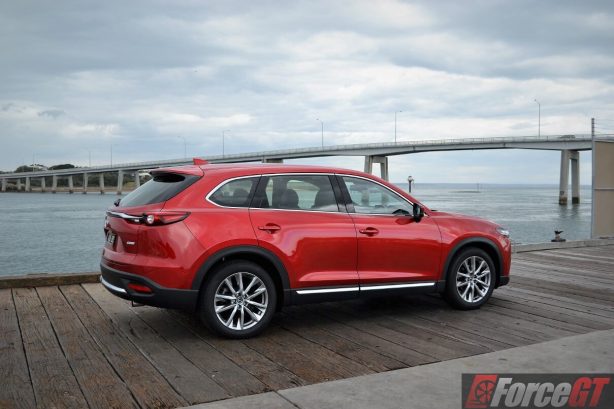 A newly developed 2.5-litre direct-injection turbocharged petrol engine powers the entire range, replacing the old 3.7-litre V6 in the first generation CX-9. Its output of 170kW is down from the previous 204kW but there’s more torque, 420Nm compared to just 367Nm from before. And trust me, you won’t miss the old V6. The new powerplant is one of the best four-cylinder turbo engines we have come across, delivering responsive power without a slightest hint of turbo lag. Its maximum torque is now accessible much lower in the rev range, at 2,000rpm, giving the large SUV much better driveability around town. The stronger mid range also allows for swift overtaking on open roads. 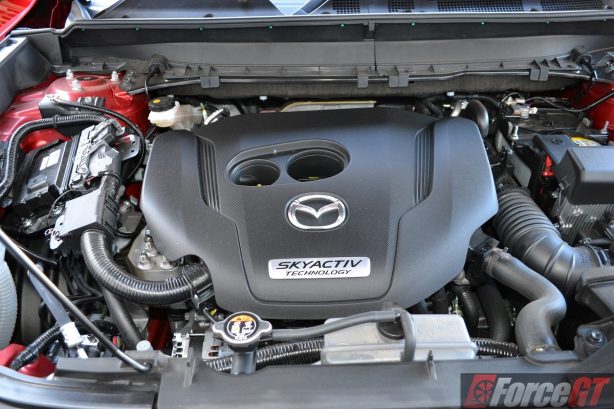 Improving efficiency are the now common auto stop/start and regenerative braking fuel saving tech, but the Mazda has one more trick up its sleeves. Called the cooled exhaust-gas recirculation (EGR), this new setup is designed to reduce the engine’s combustion temperature by recirculating a portion of the exhaust gas back to the cylinders to act as heat absorbents. The lower cylinder temperature allows a leaner air/fuel ratio, which in turn saves fuel.

And those innovative technologies show in the real world. The CX-9 GT AWD I tested triumphs other normally aspirated V6-powered rivals with a recorded average fuel consumption of 10.1L/100km after 682km of driving, mostly in urban settings. A diesel is still undoubtedly more economical but the Mazda’s figure is mightily impressive for a near two-tonne family SUV.

With a more conservative driving style and a proper mix of freeway and city travel, the CX-9 should have no issues getting close to the figures in the brochure, which are rated at 8.4L/100km for front-wheel drive models and 8.8L/100km for all-wheel drive alternatives. 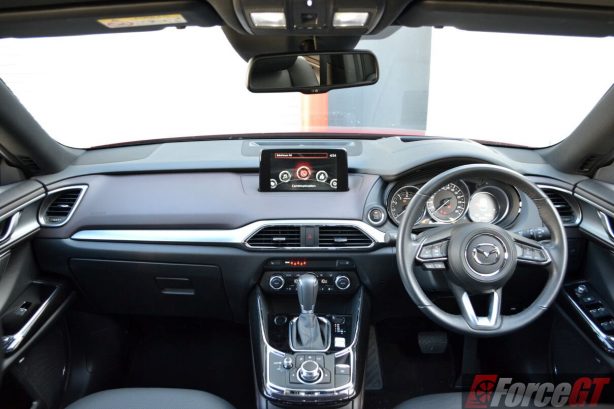 The six-speed automatic is another gem in the drivetrain, delivering smooth shifts with near twin-clutch level of speed and efficiency. Its evenly spaced ratios are well matched to the torquey turbo four, swapping cogs intelligently without ever catching you off guard, no matter what the terrain is.

Quelling previous criticism, drivetrain refinement has been brought up to another level in the new CX-9. There’s now premium level of silkiness, quietness and tranquility, even if you send the revs up high.

Weight saving is another key focus in the new car, encompassing every aspect of vehicle construction from the engine and drivetrain to the body and chassis. Through the use of lightweight yet stronger and more rigid materials, the new CX-9 is some 130kg lighter than its predecessor. Apart from reaching 100km/h slightly quicker than before at 7.6 seconds, the lighter CX-9 also takes on sharper dynamics.

Equipped with MacPherson struts up front and a multi-link arrangement at the back, the CX-9 feels agile for such a large vehicle and while body roll remains a companion in corners – as expected from a high riding SUV – it’s all very manageable. It responds well to steering inputs, the brakes are strong and the improved grip level from the all-wheel drive gives further assurance in all conditions.

Around town the CX-9 soaks up bumps and ruts with aplomb but isn’t as good on the low speed stuff as a Toyota Kluger. On the freeway the ride is plush and quiet with minimal road and wind noise thanks to improved sound deadening in the new model. 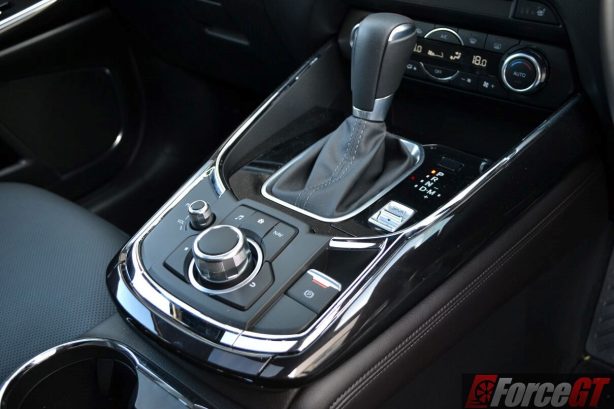 The CX-9’s cabin is a class above the rest in the segment. Like the exterior, the interior pushes upmarket with high quality, soft to touch surface on the upper dashboard and door trim, premium glossy trim in the lower centre console and lavish leather upholstery. There’s also a sweeping single piece of aluminum across the dashboard, emphasizing width.

The car-like dashboard is clean and uncluttered, while its low, angled forward position gives a sense of space. The cabin boasts good ergonomics, with most switchgear within easy reach and is where you expect to find them. At 5065mm long, the new CX-9 is 30mm shorter than its predecessor, but its wheelbase has been stretched 55mm, benefiting rear passenger legroom as well as entry to and exit from the rear.

The front row seats are very comfortable though a little more thigh support will be appreciated. Three adults can get into the middle bench without getting too intimate, but the third row seats are best suited for small children with their tight legroom.

A simple pull of a lever is all that’s needed to fold and move the second row forward to gain access to the third row. For further convenience the second row seat can even slide forward without the need to remove an affixed baby or child seat. 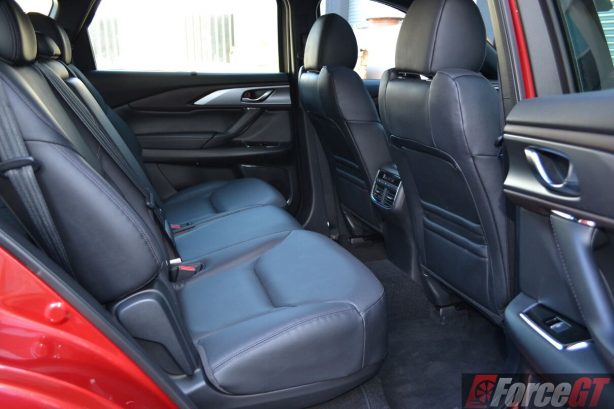 The electric tailgate my CX-9 GT test car opens up into a 230-litre boot space with the third row up. When not in used, the third row tumbles down with the headrests folding neatly away to form a flat boot floor, producing 810 litres of space and a 1,282mm long load floor. Folding down the second row of seats further expands the space to 1,641 litres. Measuring 2,158mm long and 1,489mm wide, the liberated space is enough to swallow a pair of mountain bikes, though the high boot floor can make loading heavy items into the boot a challenge for some.

The cabin has a wide variety of well thought-out storage space to meet the needs of the modern, connected family, including four USB ports. The storage below the centre armrest is however, unexpectedly small for a full size SUV, but worse it gets really hot when the engine is running – not a good spot to place your smartphones or cool drinks. The cup holders are also quite small given how large the centre console is. 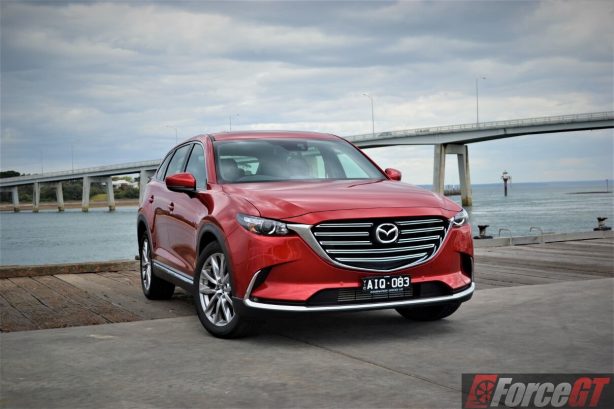 Apple CarPlay and Android Auto smartphone integration are however a glaring omission in a flagship SUV like the CX-9.

The arrival of the second generation Mazda CX-9 crossover has made choosing a seven seater SUV a lot easier. Without doubt, the 2017 CX-9 sets the benchmark for exterior and interior design, powertrain, quality and overall packaging.

If budget permits, opt for the GT or Azami grades and you will drive away in a properly luxurious SUV without the exuberant price tag.