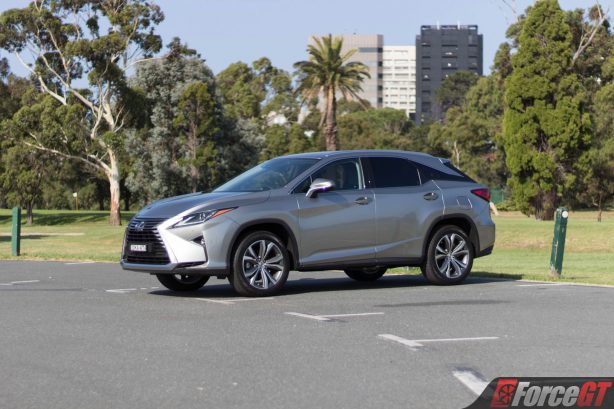 Lexus offers their RX mid-size SUV range in three differing variations to cater to drivers with distinct needs, the RX 200t that we’re testing does without the All Wheel Drive system and V6 power from its bigger brothers, instead opting for 2WD and turbo performance. Can the little brother of the RX family offer the same refinement we’ve come to expect from Lexus and not get left behind by the bigger more powerful siblings? 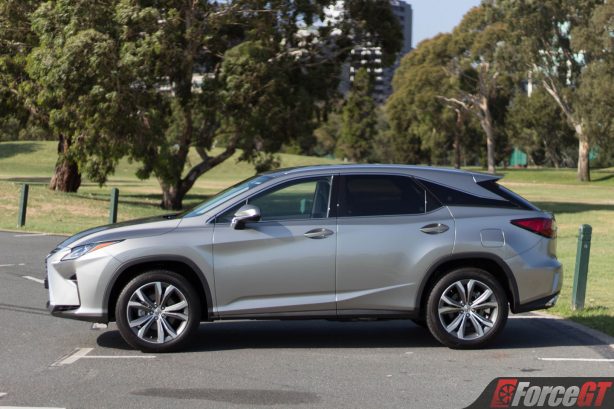 Making any SUV-style car visually impressive is no easy challenge, the proportions required for practicality can easily ruin a great design when compromises are met. And it’s in the looks department where Lexus have hit a home run.

From every angle the RX 200t stands out with the sharp bold and angular design making a great impact on the visual senses. The large spindle grill sits neatly between headlights bearing a resemblance to the Lexus logo. The standout showpiece is without a doubt the floating roof line enhanced by the blacked out C pillars that really makes its mark from the side profile. Try as you might, the RX 200t is going to be a very difficult car to ignore on the road, it exudes presence in every direction.

Jumping into the RX 200t you’ll be able to enjoy an equally satisfying design, metallic painted trim wraps around various sections adding style while the overall fit and finish are completed to a high standard. There’s no doubt that Lexus has put forth huge efforts into maintaining the already high standard of interior refinement. Everything is well thought out and it’s the sum of all the minor improvements that add up to the total package. Items like the extra plush carpets, adjustable height drink holder, expandable door storage compartments, quality tactile dials and switches and glovebox trim all combine to make the interior something you’ll enjoy for years. 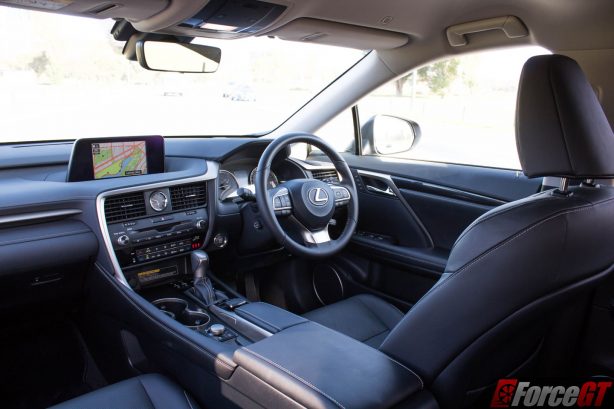 And yet, even after all this effort there’s still room for further improvements. Our particular car had some raised stitching joins on the wheel which should have been flat and why does any Lexus come with the same cruise control interface that’s fitted to a Corolla when the elegant solution of thumb operated wheel controls exists?

Beyond the steering wheel sits a clean and crisp gauge cluster with a concave translucent cover, which does have a habit of making everything disappear once the sun hits it from certain angles. There’s no digital speed readout in the cluster but the analogue dial has half of its real estate dedicated to usable speeds making accurate speed readings simple.

While stationary, the climate control interface is a piece of cake to use since you can focus all your attention on what each icon represents, while driving it’s another story as it’s not intuitive enough at a glance. 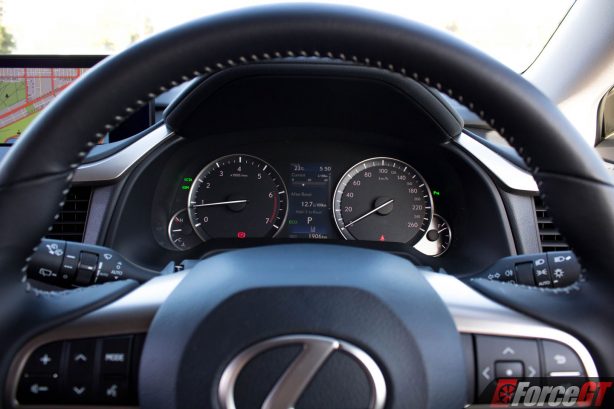 For trips, long and short, the heated and vented seats offer excellent comfort and support. Finding a comfortable driving position is effortless with everything electronically adjustable, seats and wheel, and saveable to one of three seating memory profiles. In the back, there’s plenty of headroom and leg room for three adults. Small children may not like the high door frames as they restrict visibility but for others it’s no issue. Storage in the boot is acceptable at 466 litres, expandable to 937 litres with the seats folded down. 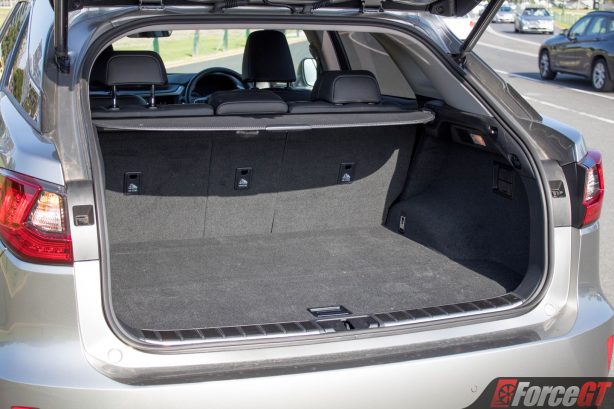 The dashboard mounted 8-inch infotainment display is controlled via the Lexus Remote Touch control which is a force feedback enabled joystick and mouse combined. As you bring the cursor to on-screen buttons, it’ll lock onto them with the force feedback giving you standard directional controls. At other times when there isn’t any on-screen elements available, it’ll act as a mouse cursor. The system is intuitive and easy to pickup but can be fiddly when attempting to move the cursor over just one notch as accuracy can be lacking. Graphically, the display needs updating as the interface could do with a visual refresh to keep it modern.

One of the standout features of the RX 200t is the sound system. With 12 speakers located throughout the cabin, your music will sound superb. Other tech at your fingertips includes the wireless charging station for supported mobile devices and the automatic electronic handbrake that makes getting your journey started a tad more effortless. 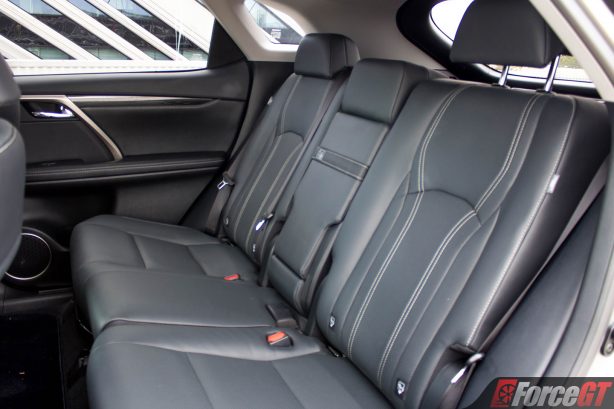 Without the extra weight of an AWD system and the lighter more compact motor, the RX 200t comes in 90kg and 215kg lighter than the RX 350 and RX 450h, respectively, but don’t be fooled into thinking it’s a slouch. There’s more than enough power to get the two tonne body moving at pace and torque steer, while present, is kept to a minimum under hard acceleration. The 2.0-litre turbocharged 4-cylinder engine generates 175kW of power with 350Nm of torque from 1,650 rpm. It’s a smooth engine with a usable, torquey powerband that makes driving the RX 200t relaxing with the knowledge that you’ve got enough power available for when you need it.

Initially when driving around town the fuel economy figures headed north to 14L/100km, well above the claimed 8.1L/100km from Lexus. However after mixing in a similar amount of freeway driving things settled to a more acceptable 10.4L/100km, which while not amazing, is still decent for such a large car. For improved fuel economy, a start stop system is included and to date it’s the best I’ve tested. It’s completely seamless and well integrated to such an extent that you’ll forget it’s even there.

The 6-speed automatic gearbox has an easy job of using the available torque for the right gear and shifts are almost stealth-like in nature. A more aggressive and responsive shift down for full throttle would have been nice but would detract from the refined driving experience and doesn’t suit the nature of the car either. 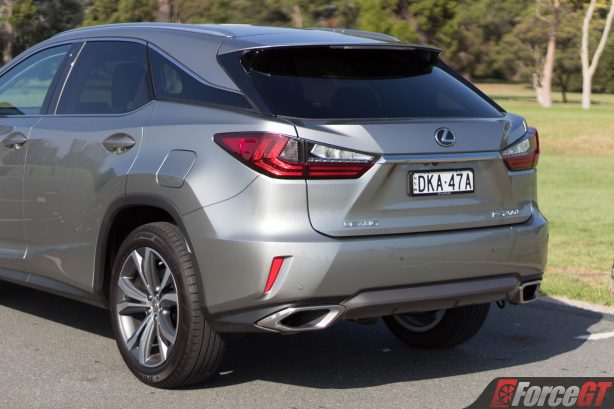 Even though it’s the lightest of the RX range, handling isn’t of the sporting nature but then again this isn’t the type of car to blast through chicanes with. Rather, you’ll appreciate just how well it flattens out poor road conditions and handles bumps gracefully thanks to the great ride. There’s good grip available for hasty changes of direction but the comfort tuned suspension quickly reminds you to back off and take everything at a more leisurely pace. And that’s the appeal of the RX range, it’ll change your driving style from “I have to be everywhere five minutes ago” to not worrying about it and just enjoying the trip there in comfort.

Another standout feature that proves its worth on freeways and highways is the lane keep auto assist system that’s not as intrusive as some competitors’ systems. When put to the test, the system will nudge the car back towards the center of the lane while providing haptic feedback warnings through the steering wheel, another great addition which works much better than the easily ignored audio warnings for critical alerts. 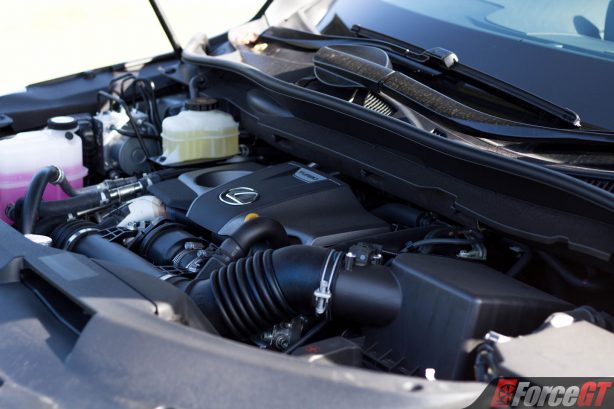 When it comes to features, the mantra from Lexus that luxury should be standard is certainly on point. The RX 200t comes equipped almost to the point of excess. The ‘base’ Luxury grade we tested came with everything below as standard:

The Lexus RX 200t we tested comes in at $74,540 excluding on road costs and is priced quite competitively in the luxury mid-size SUV segment, thanks to the omission of a larger powerplant and AWD drivetrain. Not once was I left wanting for these throughout the entire test duration.

Should you desire additional traction and power, Lexus has the RX 350 and RX 450h but as a daily driver that spends 99% of its time on paved roads, the RX 200t is hard to go past with looks to die for and a very well integrated feature list.