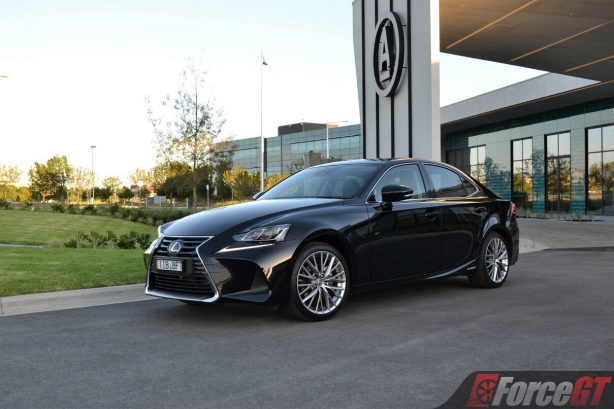 As if the outgoing model wasn’t bold enough, Lexus has gone even more courageous with the updated 2017 IS sports sedan. Launching on the backdrop of one million global sales and a teasy advertising campaign celebrating those who dare to step forward, the 3 Series and C-Class rival boasts the strongest interpretation yet of the brand’s L-finesse design philosophy.

Most of the exterior changes focus on the sedan’s front fascia, which has been made even more distinctive and aggressive with a new more angular spindle grille, restyled full LED headlights and larger front bumper intakes. We like the new front look, which, in our eyes, adds a touch more sophistication and flows much better than the old design. 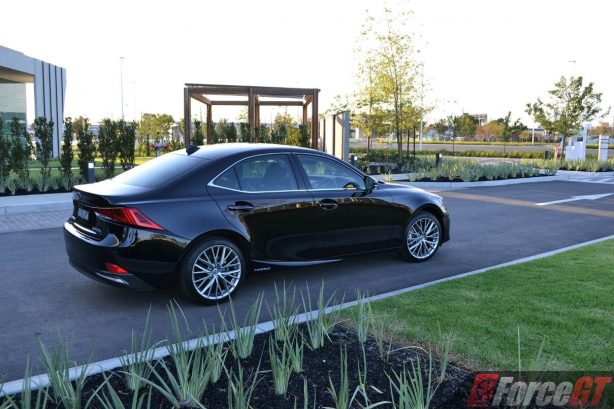 Inside, the most noticeable update is the new multimedia screen, which has increased in size from 7 to 10.3 inches. The wider, higher resolution screen fits into the upper dashboard much better and now runs the latest Lexus multimedia system. The fiddly joystick-like interface that operates the screen is still a bit tricky to use, often sliding past the object of interest when you push on the joystick to select it. Lexus has added “Enter” buttons on the sides of the interface to boost usability, but we still prefer the touch-pad like interface found in the NX crossover and it’s a surprised that’s not carried across to the IS. 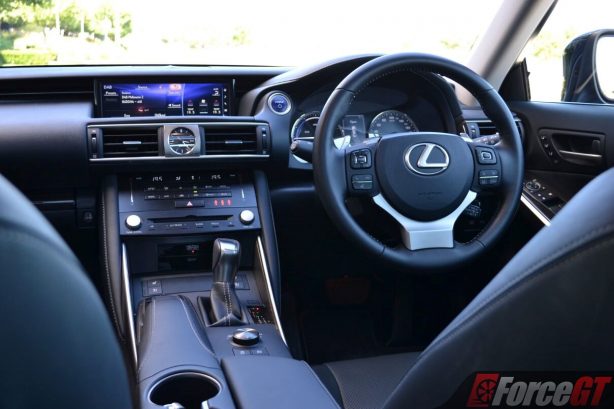 One of the most criticised parts of the interior in the pre-update model was the dull, matte black plastic trim on the centre console where the audio and air con controls sit. Welcomingly, this has been replaced with a new “hairline-finish surface” that looks and feels much better quality.

Already three years old, the IS’ cabin is starting to show its age but it’s still a pleasant place to be in. The seats remain the most comfortable in the business, shaped as if they have been precisely contoured to your body. Its driving position is also excellent, you sit low and tight as you’d expect in a sports sedan. Rear legroom is, however, tighter than its German rivals. 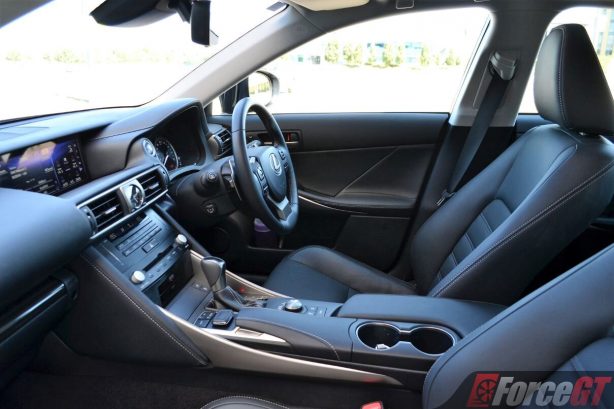 There’s no interior mood lighting, which we think is a major oversight in this new update, along with the absence of head-up display, which isn’t even available as an option. Lexus is also seemingly not bothered with the IS’ old school foot-operated parking brake when an electronic one could have been easily carried over from the other models in its line-up.

Under the bonnet, the 2017 IS 300h features the same powertrain as before – a 2.5-litre four-cylinder 133 kW Atkinson cycle petrol engine paired with a 105 kW electric motor. Combined, they channel 164 kW of power and 221 Nm of torque to the rear wheels through a continuously variable transmission (CVT). 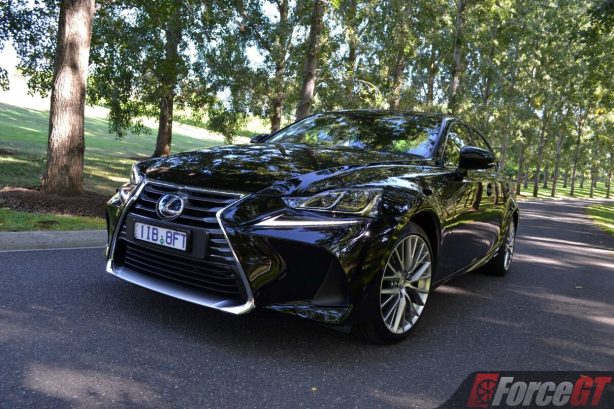 Favouring efficiency and smoothness over performance, the hybrid drivetrain will not deliver brisk acceleration off the line but does offer a very relaxing drive with plenty of go both around town and on the freeway. The transition from electric drive during light acceleration to engine power is impressively seamless, as there is barely a hint when the engine kicks in. It’s also superbly quiet and comfortable, making it a great long distance cruiser.

The electric motor gets its power from the nickel-metal-hydride battery pack tucked underneath the rear cargo deck for better weight distribution. Disappointingly, with this update Lexus has not made the transition to newer lithium-ion battery found in the new LS and LC hybrid which allows for greater energy bursts, aiding acceleration and electric-only driving range. 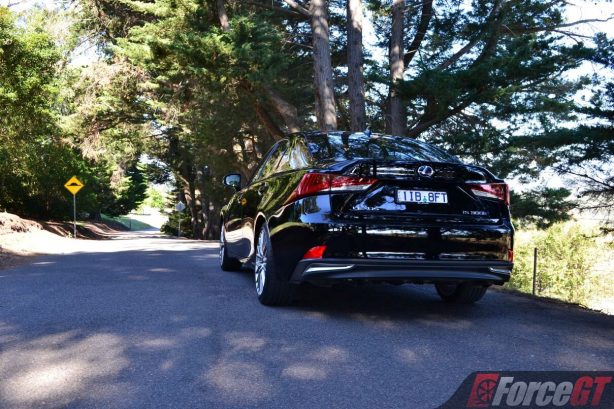 Tipping the scale at 1,720kg, the IS 300h is hefty but that doesn’t mean it’s sloppy in the handling department. Far from it, in fact. Corners are handled with excellent composure with very little body roll thanks to a neutral chassis and good grip. The weight dulls its responses slightly through bends and the steering isn’t the most connected, but it is still a reassuring drive.

Over our week-long test with a mix of urban and country driving, the IS 300h’s recorded average fuel consumption figure of 5.9L/100km is impressive. At exactly a litre higher than the claimed 4.9L/100km, its real world fuel economy is comparable to a diesel, but you get much better refinement and lower emissions. With more conservative driving, it’s not hard to hit the mid fives. 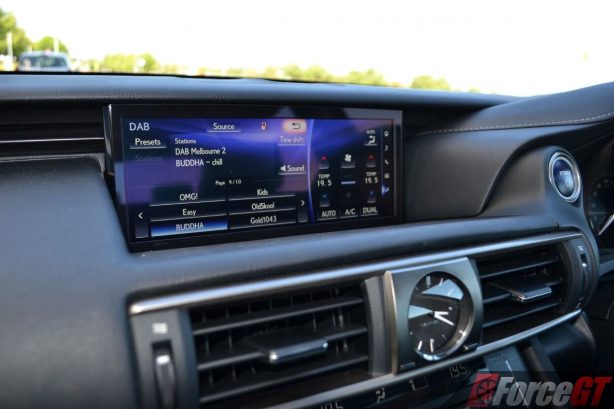 Generous equipment level is a strong selling point for Lexus and the updated IS range is no exception, boasting best-in-class standard features. Our full fat Sports Luxury variant is brimming with kit and there’s virtually no options.

There’s a lot to like about the Lexus IS 300h. It is quiet, comfortable and reliable, with respectable dynamics and excellent fuel economy to match. Rewarding performance isn’t what’s on offer here, rather, it’s refinement, smoothness and luxury. And the 2017 updates can only make it more appealing.

2017 Lexus IS pricing and specifications