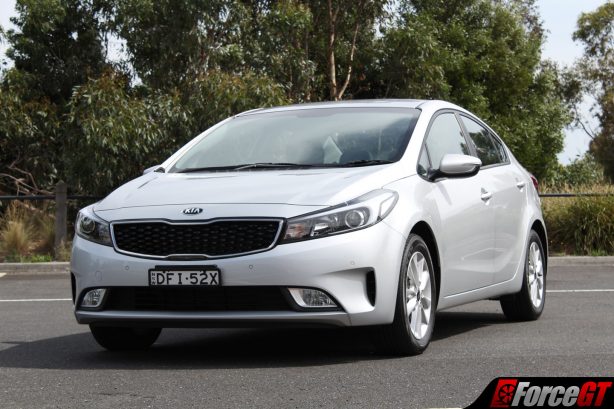 Kia is well known for producing practical and capable cars for those on a budget while offering an extensive feature list without the price for their top end models. Their new euro inspired styling is really helping to bring the whole package together and raise the brand’s profile overall. We’re taking a closer look at the Kia Cerato Sedan in S Premium trim to find out just how well it stacks up against the bigger brands. 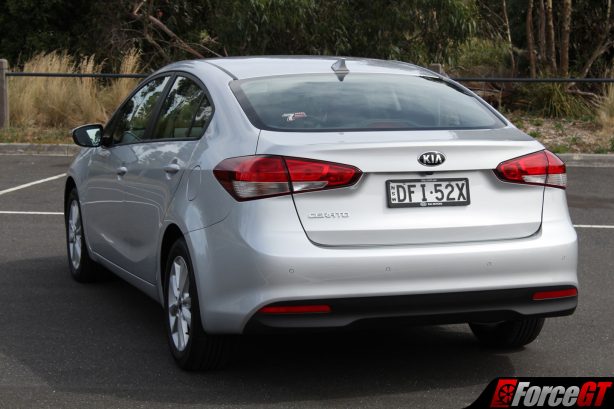 Let’s start on the outside and what is quite possibly the greatest strength of the Cerato, the design. Kia has really knocked the ball right out of the park on this one with a reserved and slightly angular design style. The coupe is easily the best looking of the lot but the sedan also has its charm with its clean lines and just enough character to stand out from the crowd.

Unlike the great exterior the interior comes across as simply good. It’s a buffet of soft blacks and grey with a sprinkling of piano gloss black for the highlights. There was a real missed opportunity to break things up with silver highlights on other portions of the trim, particularly around the media display that would have made the interior visually more exciting.

Budget plastics are used within but to Kia’s credit, only sparingly as not to point out that the Cerato was engineered to satisfy those that are happy to trade off a little style for a tighter budget. One nice touch used inside is the shark gill like contouring on the passenger dash pad and door trims, it’s a subtle enhancement that works well. 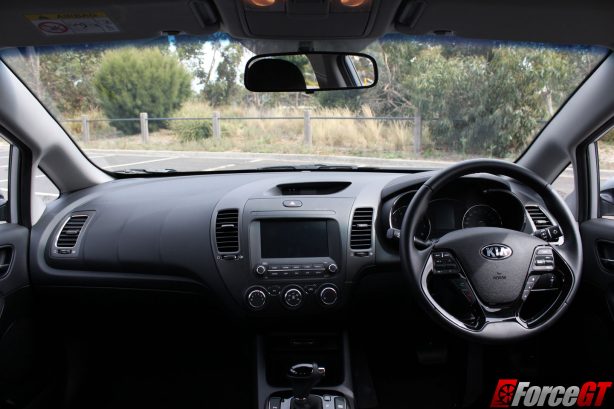 From the driver seat the first thing noticed was just how good the A-pillar visibility is. Large triangle windows and well placed mirrors provide excellent visibility for what is usually a difficult to see blind spot. The seating position is comfortable and allows you to sit quite low if that’s your preference while the seats themselves offer comfort but not much in the way of lateral support.

If there’s one place that I’m glad the budget made way for leather, it’s the steering wheel. In the hand it offers a solid tactile feel and the mounted controls are well thought out and intuitive to use.

The 7-inch media touchscreen comes well equipped with Android Auto / Apple CarPlay and satellite navigation. The system overall is basic and easy to operate with a simple menu structure and control interface. The media touchscreen did have an annoying habit of displaying a warning message that comes up every time you start the car and can only be clicked away, a simple time out would have been nice and done away with this irritation.

I’d like to say the audio quality is average but the yardstick has certainly moved on when compared to the offerings from Mazda, Honda as well as Subaru and the Cerato can’t compete in that regard. Further hindering enjoyment of your favorite tunes is the rather loud engine which drones into the cabin higher up in the rev range. Additional sound dampening through the firewall could assist in muffling the majority of this noise and it’s surprising that Kia hasn’t gone for that option. 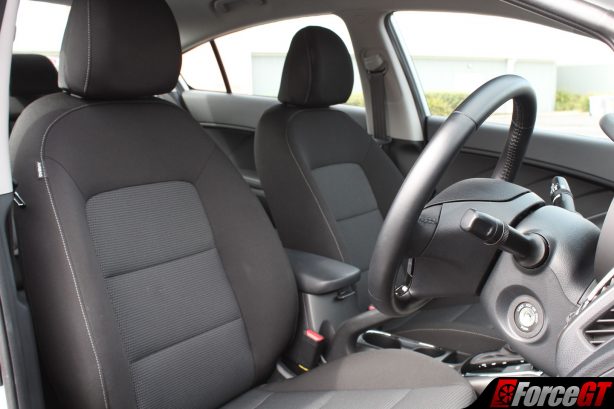 In the rear seats there’s room for two adults though three is very cozy and not advised for long trips. Legroom for rear passengers is ample even with the front seats adjusted more towards the rear. Something I wasn’t expecting from the Cerato was just how large the boot was, clocking in at a hefty 385 liters and more available from the folding rear seats.

When driving the Cerato there’s nothing that brings out the hidden Daniel Ricciardo from within, rather you’ll tend to relax and enjoy the excellent comfort from the ride. The attention to detail on providing a great ride hasn’t gone unnoticed, the Cerato soaks up all manner of bad road condition and doesn’t give a second thought to them. If the looks are the best feature the Cerato has, then the ride is a very close second.

The initial turn in when cornering hard is responsive but short lived as the seats offer not enough lateral support and the body roll comes in slowly. The steering feel is a little light for my tastes at all speeds though you may enjoy a lighter touch when handling the Cerato day to day. Oddly enough when driving the Cerato it comes across as a much smaller and nimbler car than it appears from the outside, a sporty coupe model with a larger engine could be a blast to drive. 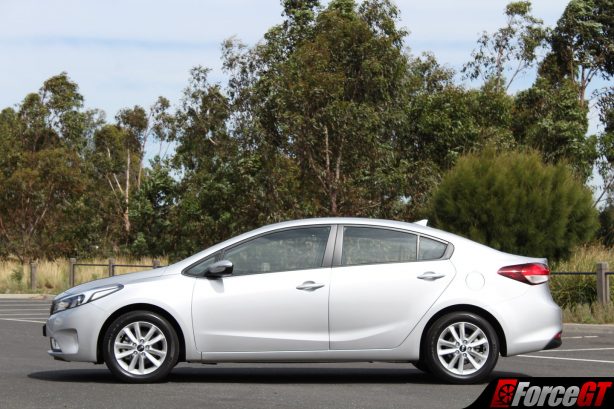 The 2-litre atmospheric 4-cylinder petrol engine offers up 112kW of power and 192Nm of torque which sounds like enough but it’s all hidden away up in the rev range. Unlike a forced-inducted unit you’ve really got to rev out the engine to get anything more than a casual jog out of it. In order to rectify this the automatic gearbox is very willing to kick down a gear and start revving hard but this band-aid solution isn’t enough to cover the lack of power. Add in the fact that the engine drone noise saturates the cabin on high revs and you’ll really want to baby rather than hustle the Cerato on the roads.

In the engine’s defense it did perform well economically without the aid of most fuel saving tech available on rivals bringing in a combined suburban/freeway figure of 7.4L/100km. Kia claims a figure of 7.2L/100km can be achieved and if anything they’ve understated themselves here, turn the AC off, keep the ever optimistic gearbox from dropping down gears and that figure can be beaten. 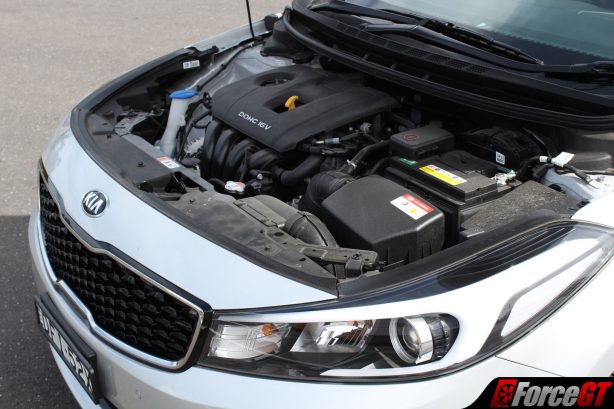 Coming with a 7-year unlimited kilometer warranty shows testament to how much faith Kia have in their quality and reliability and it shows. The build quality of the Cerato is solid both outside and inside, there were no glaring issues I could find and believe me I tried.

When it comes to toys to play with the Cerato doesn’t offer up a whole lot with the optional driving sport/economy driving modes and heated/vented seats topping the list. On the safety front you do get blind spot monitoring, parking sensors, a reversing camera in the S Premium. The higher spec Si and SLi gain access to LED daytime running lights, Rear Cross Traffic Alert and the Forward Collision Warning System.

Priced at $24,990 plus on-road costs as tested it’s difficult to see where the Cerato shines above it’s competitors, specifically the Mazda 3 Maxx and the Honda Civic VTi-S. Both come in at similar price points but offer a more premium overall package. The Cerato really shines at the lower spec S model and the only real advantage for the mid range S Premium would be the impressive 7-year warranty. The Cerato is a good well rounded and practical car but the small to medium sized market is increasingly competitive and Kia have brought a good looking slingshot to a crossbow fight.