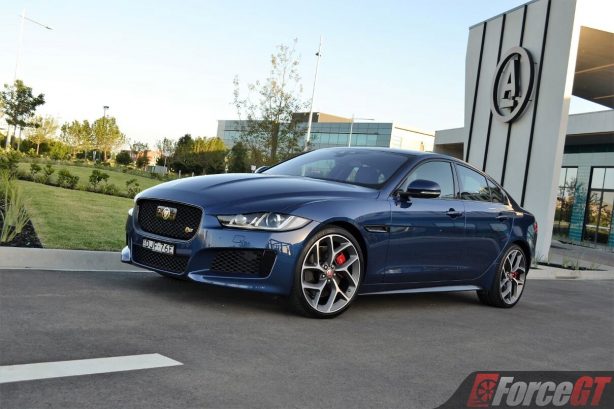 There are three main reasons you would buy the new Jaguar XE. It’s not a BMW, it’s not a Mercedes and it’s not an Audi. Have a look around next time you’re on the road and count the number of Teutonic express you see. Countless. Exclusivity is what you get in the XE that you don’t in a 3 Series, C-Class and A4. And that’s to be celebrated, isn’t it?

Oh, one other thing, too. At just over $60k in Australia, the base XE is the least expensive model in Jaguar’s line-up whereas all that’s needed to get behind a premium German badge is about forty grand. So the British car gets another upper hand for brand value.

But the big question remains – does the Jaguar have what it takes to put a dent on the highly accomplished German establishment? To find out we slip straight into the most potent model in the XE range, the S. 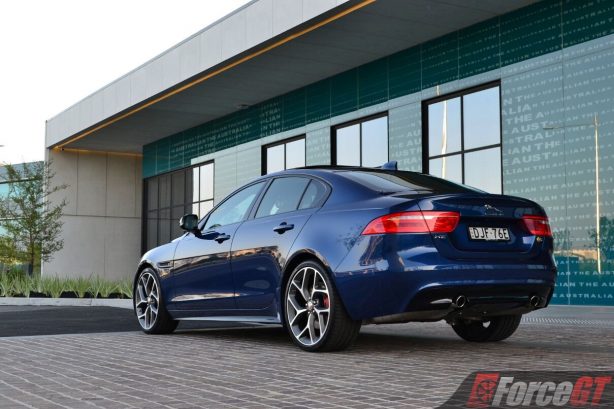 Calling the BMW 340i M Sport, Mercedes-AMG C 43 and Audi S4 as rivals, the $105,350 plus on-road costs Jaguar XE S is the sportiest four-door the marque currently makes, though a SVR version is almost a certainty in the near future to take on the M, AMG and RS stable. For the time being, if you’re looking for anything more fun you’d need to step up to the F-Type coupe.

The XE is a beautiful thing to look at. It’s heavily sculpted, yet modern and contemporary. The front is quintessentially Jaguar with an imposing upright grille and strong bonnet lines for a taut, muscular appearance. The rising waistline adds to the powerful stance, while the rear haunches take inspiration from the F-Type. The J-Blade daytime running lights are now Jaguar’s signature, complemented in the opposite end with distinctive rear lights featuring a horizontal line intersecting a roundel, a design inherited from the iconic E-Type. 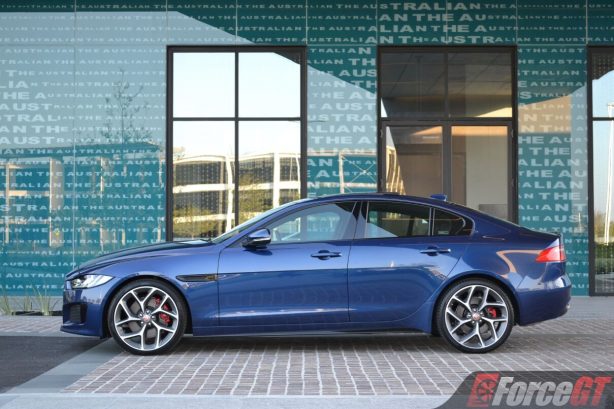 The S model conveys its performance credentials through the sportier front bumper with larger front air intakes, side skirts and discreet boot lid spoiler. For added sophistication customer can option up the Black Pack like what’s on our test car which brings gloss black to the front grille and its surrounds, front bumper blades and side vents. But what really sets off the XE S are those striking 20-inch forged alloy wheels fitted as an option on our test car, replacing the standard 19-inch items.

Step inside and the first thing the Jaguar hits home is the perfect driving position, which is prerequisite for a proper driver’s car. The dashboard is clean and uncluttered with neatly laid out buttons that are all within comfortable reach of your finger. Having said that, the location of the driving mode buttons just aft of the gear selector often requires you to take your eyes off the road to operate. A rotary knob for the driving mode selector would make life so much easier on the go. 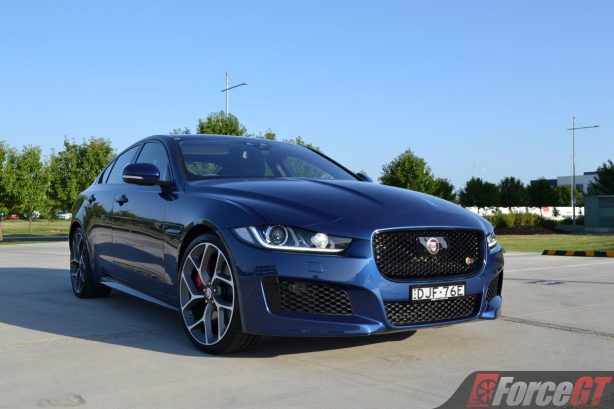 Satellite navigation, media and vehicle setting functions are all taken care of by the central touchscreen. Our test car is equipped with the larger optional 10.2-inch InControl Touch Pro (8-inch is standard) which removes physical shortcut buttons entirely and comes with a more powerful quad-core processor. The screen dispenses crisp graphics and unlike the business-themed, monochromed systems found in other rivals the one in the Jaguar lightens the mood with vibrant colours. It’s not, however, as intuitive as that of BMW and Audi, and the split screen mode lacks personalisation options. The head up display is also almost not visible when seen through polarised glasses (perhaps, Jaguar should learn a trick or two from Lexus).

Polished aluminium and piano black trim adorn the centre console and yes, there’s that Jaguar trademark pop up gear canister. Another cool thing is the engine start button which glows red and beats like a heartbeat awaiting your push. No doubt, it’s a smart, elegant and plush cabin with suitably upmarket materials from top to bottom. Fit and finish is tight throughout except for an occasional slight rattle on the passenger side dashboard. 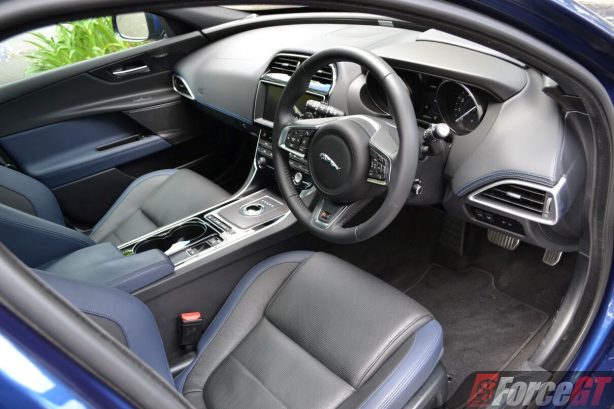 The 10-way electrically adjustable Taurus Leather and Suedecloth sport seats in the S are comfortable and feels appropriately snug with excellent support. Front head and legroom are on par with the rest of the segment but space in the rear isn’t as generous. Taller passengers sitting at the back will find their knees kissing the front seatbacks and their heads touching the sloping roof. A minor tradeoff for that striking exterior? We will leave that up to you to judge.

At the back the XE’s 455 litres of boot space is down on the Germans but can be augmented by the optional 40/20/40 split rear seats.

Enough of the nitty gritty. This is the XE S after all and here comes the stuff that matters. Under the bonnet packs a supercharged 3.0-litre V6 petrol engine, the same unit found in the base F-Type. It develops 250kW at 6,500rpm accompanied by 450Nm of torque which peak at 4,500rpm (an updated version with 280kW is on its way). Because it’s supercharged, response is immediate with no noticeable dead spot in the power band. The perky V6 pulls hard in any rpm and in any gear. We just wish it had a better soundtrack. That’s not to say the XE S sounds mundane, far from it. In fact in the depth of its majestic roar you can just hear the whine of the blower, but the aural experience would be so much better if it was a little crispier. 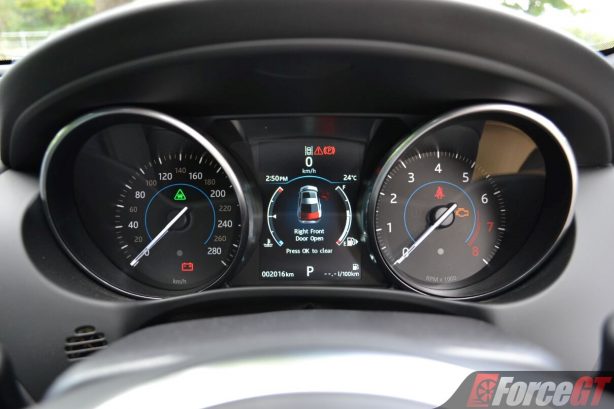 Driving the rear wheels the ZF eight-speed automatic shifts intelligently and responds well to kick down. There’s hardly a need to paddle the shift manually. However, rev matching on downshifts could be better executed and there’s no need to feel every downshift when slowing to a halt. Jaguar claims 0 to 100km/h acceleration time of just 5.1 seconds but our best attempt was 5.4 seconds which is still very respectable for a mid-size sedan.

Where the Jaguar really has a genuine edge against the competition – and this includes BMW – is in the way it handles the twisty stuff. This is a proper sports sedan and by that we mean you can really belt it at the bends and let the rewards etch a big wide grin on your face.

Riding on an aluminium intensive chassis which is touted as the lightest and stiffest ever in a Jaguar saloon, the XE S is poised, composed and beautifully balanced. The front end is amazingly locked down, tracing your line with utmost alacrity, and there’s abundance of grip from those Pirelli P Zero tyres.

The S’ sports suspension with adaptive dampers has a Dynamic mode which stiffens things up a notch for a tauter feel and less roll. Such impressive is the chassis and suspension tuning that even when you hit a mid corner bump the XE despatches it unflustered and regains grip quickly. Dynamic mode also sharpens the transmission for crisper shifts that are, though not as snappy as a twin-clutch box, admirably fast. 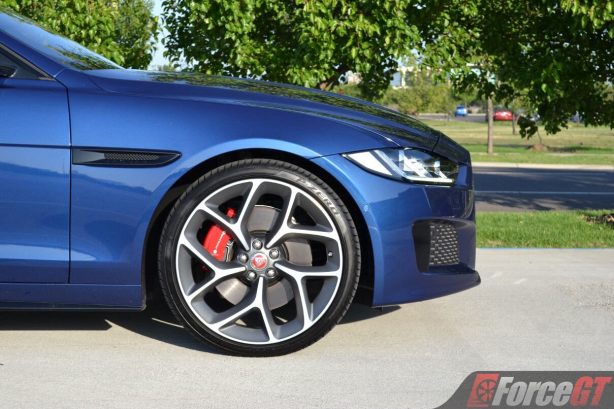 Jaguar is a late comer to electric steer but it has been time well spent. The XE’s tiller has just the right amount weight and is delightfully communicative. Its razor sharp response allows for precise placement of the car mid corner and quick direction changes. Elsewhere, the brakes are strong with good progressive feel through the pedals.

Jaguar sporting DNA is assured in the XE S. Crucially it’s just as polished on the daily grind. The ride is smooth even on those thin low profile tyres, there’s little road and wind noise in the cabin and the engine auto stop/start is seamless. Even the operation of the powered boot and electric park brake is one of the most refined and quietest we have come across.

The XE S is claimed to return an average combined fuel consumption of 8.1L/100km. On test, we managed 11.2L/100km of mainly urban driving, with plenty of seat time around our regular twisty test routes. Not bad for a performance sedan.

A four-door F-Type may be an overstatement but the new Jaguar XE S is easily the sharpest and most involving sports sedan in its class thanks to the brilliant chassis and superb engine. It’s comfortable and refined as a daily, too, though its German rivals are more spacious in the rear.