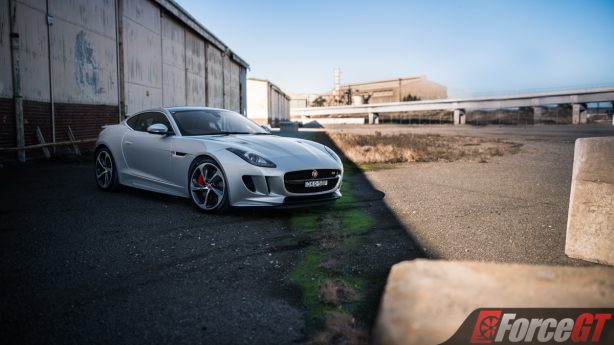 There are only a handful of truly beautiful cars in the world today and the Jaguar F-TYPE is certainly one of them.

I mean just look at it! There’s not a single bad angle, anywhere! And if there was a contest for the most beautiful posterior on a car, the F-TYPE’s inconceivably sexy rump would probably take the gong. Its sex appeal is dialled up even more with the optional Sport Design Pack with Fixed Spoiler fitted to our test car, and together with the 20” forged alloys with gloss black carbon fibre inserts, the F-TYPE is enough to make any man (or woman) weak in the knees.

Clearly, a fiendish amount of work has gone into crafting those gorgeously seductive aluminium panels that even after four years, the F-TYPE still has the uncanny ability to cause adults, and children alike, to involuntarily whip out their camera phones wherever it goes. 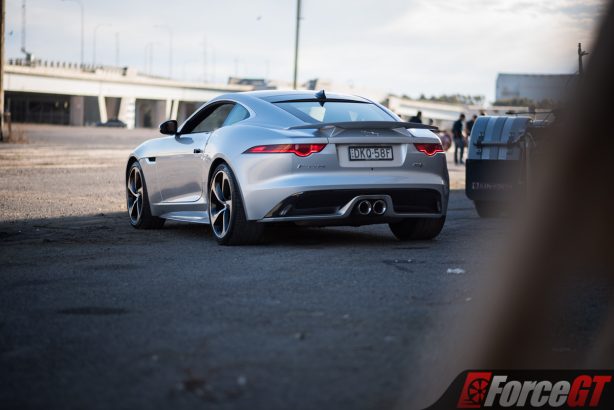 Created by the famed Ian Callum as a spiritual successor to the celebrated Jaguar E-TYPE, the F-TYPE Coupe you see here joined its convertible sibling in 2015 in Jaguar’s burgeoning portfolio, and further cements Jaguar’s reputation as a credible sports car maker.

Earlier this year, the company expanded the F-TYPE’s line up even further with a 2.0-litre turbo-four model that drops the entry price to $107,012. Our ‘Indus Silver’ 3.0-litre Supercharged V6 S AWD F-TYPE retails for $173,065, which is roughly half the price of the range-topping supercharged 5.0-litre V8 F-TYPE SVR AWD Convertible at $309,212. All stickers exclude on-road costs.

This places the F-Type somewhere between the entry-level Porsche Cayman/Boxster and the 911; the 2.0-litre petrol engine even punches out the same 220kW as the 718 Cayman. Formidable foes than.

But does the F-TYPE drives as good as it looks? Let’s find out. 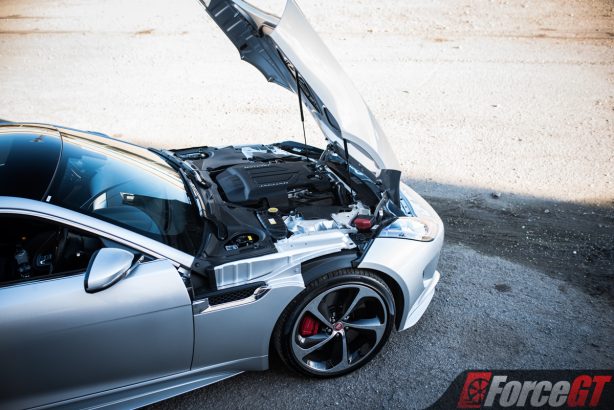 It is connected to a mechanical limited slip differential with torque vectoring and an 8-speed automatic transmission, claiming a 0-100km/h sprint of 5.1 seconds. However, we suspect Jaguar is being conservative with its claim so as not to thread on the toes of the V8, because the F-TYPE V6 S feels significantly faster. In fact, we timed it just under 5.0 seconds with launch control – 4.97 seconds to be precise, which is thanks in no small part to all-paw traction. In ideal conditions and with proper prep and road temperature, we have no doubt we could shave an additional tenth off.

Thumb the pulsating start button and the engine fires up with an angry bark from its twin central exhausts that are as big as a pair of clarinets, before settling down to an even hum. Boot it and the high-pitched supercharger scream makes the experience satisfyingly lively, and if like me, you make it a point to jab the standard active exhaust button next to the gear, I wouldn’t be bothered with the eye-watering expensive $7,110 Meridian sound system, as the thuds and pops on overrun are enough music to the ears.

It feels properly rapid and capable; the big chested supercharged V6 delivering its peak torque between a usable 3,500-5,000rpm before the full 280kW is dished up at the 6,500rpm power peak, right at the top of the rev range.

The eight-speed plays a big part here too. It’s smooth shifting and is at the right gear almost all the time, making the paddle shifters a little redundant. Braking performance is also admirable with fine pedal feel that washes off speed without strain.

By connecting the front and rear pillars of the F-TYPE Convertible with aluminium alloy beams, Jaguar has essentially produced a genuine monocoque that improves the car’s stiffness by up to 80 per cent. Furthermore, the whole structure is bonded and riveted rather than welded, while the side panels are single-piece aluminium pressings. 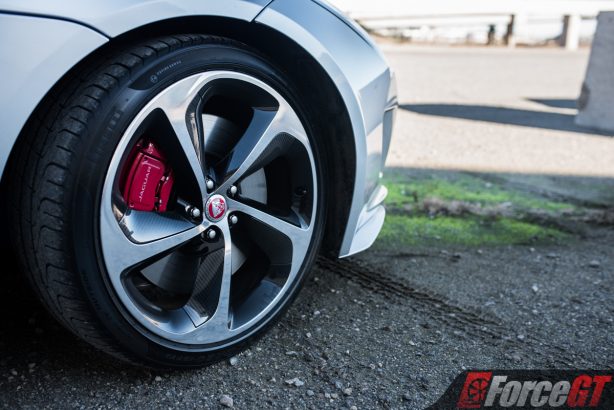 It handles corners with poise and agility, although despite an all-wheel drive system and chubby Pirelli P Zero F 295/30 ZR20 rear tyres (255/35 ZR20 fronts), its tail can still be a little leery in tight corners. Turn in is keen and there is good feedback from its precise and well-weighted steering.

There is three drive modes in the F-TYPE: Normal, Rain and Dynamic, each altering the spring rates, throttle response, gear mapping (starts in 2nd gear in rain mode) and ESP threshold.

Ride is on the firm side in Normal and Rain modes, while overly reactive in Dynamic, jostling over broken tarmacs especially over our rubbish back roads. It is best left for track use.

Another downside of Dynamic mode is the increased in ESP threshold. I found the car fishtailing a few times and struggling for grip in semi-damp wintery road conditions, but it’s also due in part to the sharper throttle response that caused the rears to break traction when powering out of corners. It would have been exhilarating on a track but murderous on the road. So, be warned! 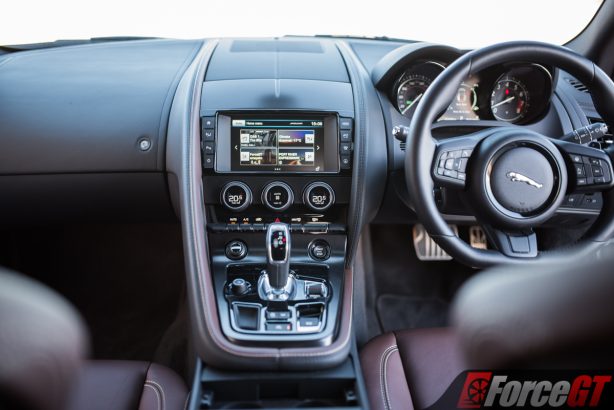 While the F-TYPE’s flamboyant exterior is pretty much spot on, the car’s interior design seemed… a little less successful. The different types of fonts and typefaces on the instruments and buttons appear to lack cohesion and the sat-nav is a little last generation. And while Jaguar is getting better with its fit and finish, it’s still not quite Audi or Porsche level yet.

However, we love the air-conditioning LCD readouts within the climate control buttons and the pop-up centre air-vents adds a bit of theatre to the otherwise relatively unexciting cabin. The good news for drivers is the excellent driving position and generally well supported, body hugging sport seats.

While you wouldn’t buy the F-TYPE for your weekly grocery shopping, it is worth mentioning that behind that sexy arse is a tiny 310 litre of boot space, taken up mostly by a space saver spare wheel. It doesn’t get any better inside the cabin, either, as there’s hardly any space to store anything larger than a phone. But who cares when you get that sexy arse!

Impracticality aside, the F-TYPE is a staggeringly good-looking car and for most, that’s enough reason to buy one.

However, the F-TYPE is much more than just looks. Jaguar has succeeded in creating a true sports car with amazing allure that would do the E-TYPE proud.

The F-TYPE is sports car first and GT second.