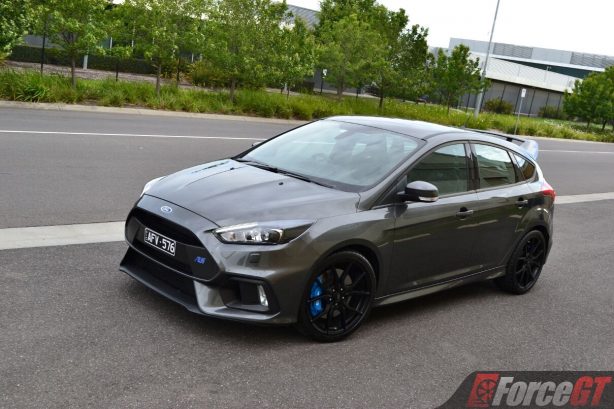 There’s a lot weighing down on the new Ford Focus RS. Not because its predecessor was hard to improve on, but because it’s such a late comer to the slew of new generation all-paw rockets. If it was to avoid come out second or third best, the Focus RS needs to be better than the Volkswagen Golf R, Mercedes-AMG A 45, Audi RS 3 and Subaru WRX STI. To its advantage, the Ford’s late arrival means it’s got a set of clear benchmark to work toward. No need for any guessing. But still, it’s faced with a tough set of rivals. Fortunately, it has very broad shoulders.

In this segment, price plays as big of a factor as performance. And at $50,990 plus on-road costs the Focus RS undercuts all its competitors bar the $1,200 cheaper WRX STI. So, no issues there. As for performance it’s got the figures to make any enthusiast raise their brows: 257kW of power and 440Nm of torque unleashed from a 2.3-litre four-cylinder engine boasting a twin-scroll turbocharger. As if that’s not enough power for a 1,575kg hatchback, an additional 30Nm is available for up to 15 seconds on transient overboost during hard acceleration. Managing all that is a Focus-first all-wheel drive system complete with torque vectoring that not only splits its torque front-to-rear, but also side-to-side. And to make a nonsense of daily-friendly dual-clutches and automatics, the Focus RS only comes in a six-speed manual. 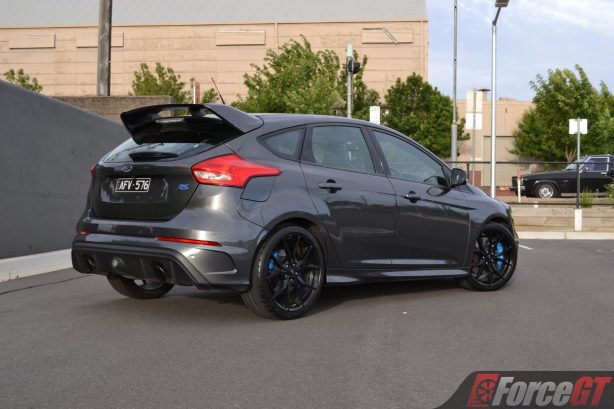 What does all that translate to? Madness. Completely. Dump the clutch at 5,000rpm on Launch Control and 100km/h arrives in just 4.8 seconds in second gear (tested), with every squeeze of the right pedal pushing you back to your seat, backed by pops, crackles and burbles from its twin-tip exhaust system on lift-off. And if you’re game enough, it will nudge 260km/h and demolish 400m in 13.3 seconds.

The EcoBoost engine is a great unit. Maximum torque is available from just 1,600rpm and hangs on until 5,000rpm. There’s minimal turbo lag, which makes the performance very accessible. It punches hard down low and pulls away effortlessly. Keep the throttle pinned and it’s quick to bounce off the limiter, though there’s not much in it in the last 500rpm. The old five-cylinder sounds more evocative but this new four-pot still does offer an aural sensation that adds to the driving experience.

The engine itself shares its backbone – including block, crankshaft and therefore 2.3-litre capacity – with the Ford Mustang EcoBoost. Beyond this though, pretty much everything is different. The turbo boost is higher, the piston heads and liners use a stronger material, the ECU uses a different mapping and the size of the intercooler, radiator and oil cooler are bigger. Not only does the RS’ engine deliver more power and torque than the one in the Pony car, it also has a sharper response to suit the hot hatch’s more hard edge personality. 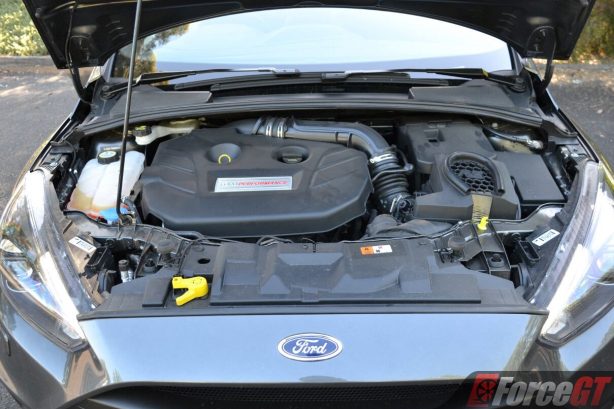 The rest of the drivetrain is just as well sorted. Purists will love the six-speed manual’s slick and easy shifts, made all the more enjoyable with that short and perfectly weighted clutch pedal. But the real highlight is the all-wheel drive system. Unlike the Haldex system used in many of its rivals which can only send up to 50% of torque to the rear wheels, the one in the RS is able to divert as much as 70% of torque to the rear axle, or in Drift Mode (more on this later), to any one of the rear wheels.

The AWD hardware is made by GKN and is based on the company’s Twinster system, reengineered specifically for the Focus RS. While the front axle is all conventional with an open differential and brake-based torque vectoring, the rear is quite unique. There isn’t a centre differential, so torque is sent to the rear differential from the front driveshafts through a propshaft. At the rear torque is distributed to each rear wheel independently through clutch packs, one on each driveshaft. The clutch packs also act as an LSD for the rear axle. There’s active torque vectoring – not brake-based – to get the outside rear agitated in tight cornering. And the final party trick? A rear axle that is geared 2% quicker than the front to kill understeer dead. 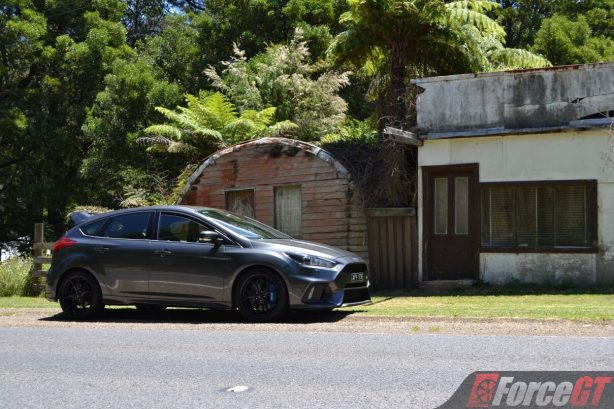 On challenging back roads, the system endows the RS with mightily impressive dynamics. Turn in is ultra sharp and the front end is so locked down it feels almost like a rear-biased AWD car – the RS drives the front only at highway speeds when pointing straight. Trail brake late into a corner while aiming at the apex, the RS feels completely neutral, with a rear that is ever so willing to rotate and point the nose in your intended line. The AWD system’s pre-emptive build-up of torque to the outside rear wheel as soon as you turn the wheel plays a large part in the RS’ understeer-free handling characteristic. The torque transfer, combined with the quicker rear axle literally ‘drive’ the car into the bend.

Grip level from those Michelin Pilot Sport Cup 2 tyres is phenomenal but not overdone, and coupled with the RS’ firm suspension, it’s capable of huge speed through a bend with minimal body roll. The steering is super quick – just two turns lock-to-lock – and ultra responsive which means you can make minute adjustment mid corner and crisp direction changes, though feedback through the tiller doesn’t really start flowing in until lock is wound. 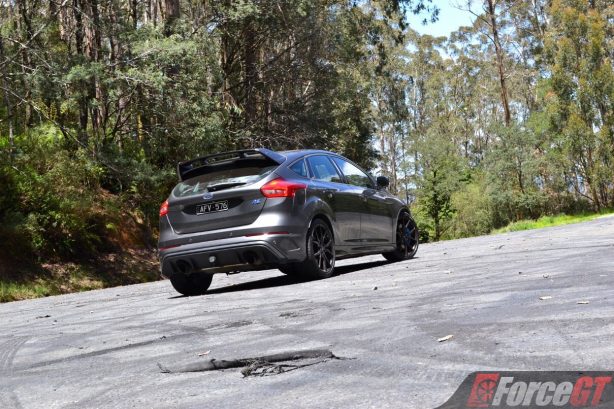 You can firm up the dampers even more through a button on the left stalk, but unless you’re at a track or on very smooth roads the harder setup can rob some composure off the car when going over rippled surfaces or mid-corner bumps.

In typical AWD fashion, you get on the power real early on corner exit, taking full advantage of the underlying all-paw gadgetry. Speed is quickly gathered thanks to the chunky mid-range torque, and it brakes just as fast thanks to the RS’ massive four-piston 350mm Brembo front stoppers, which stand up really well to punishment and bite progressively right from the top of the pedal. Speaking of pedals, they are well placed for heel and toe. 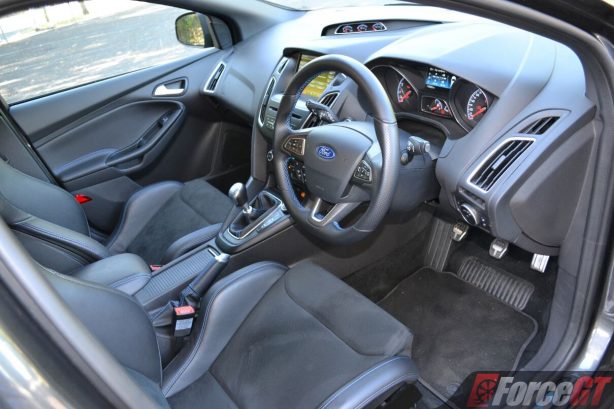 In addition to Normal, Sport and Track driving modes, the Focus RS has a Drift Mode. When selected the AWD system can channel huge amount of torque to the outside rear wheel to make it easier to induce on-throttle oversteer. Keep your foot pinned and it will maintain the slip angle by varying the torque split in the rear axle, turning expensive tyres into billowing cloud of smoke. Told you this thing is mad.

Outside the nirvana of performance and dynamics you will need to deal with the RS’ bone-breakingly firm ride. Long drives can quickly become tiresome, made worse by those thinly cushioned Recaro buckets. It’s just simply too stiff on our crumbling roads. On the flip side, its tested average fuel economy of 11.2L/100km isn’t too shabby despite our heavy right foot. 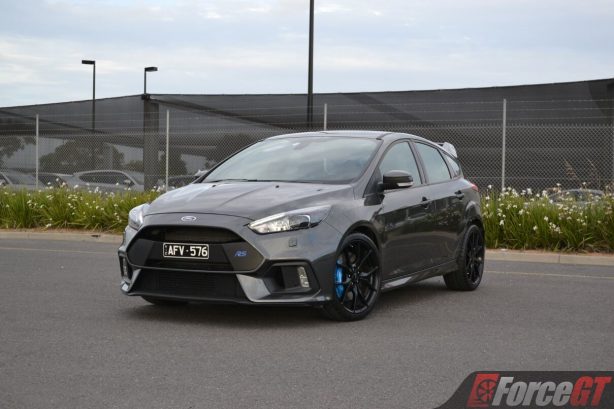 It looks good, the Focus RS. Okay, beefier side skirts and wider fenders would be better but the aggressive front bumper, massive roof spoiler, deep rear diffuser and striking black 19-inch wheels spell out its performance credentials to wicked effect.

With four doors and seating for five, the Focus RS is practical. However, the boot floor has been slightly raised compared to the regular Focus to accommodate the AWD.

The Focus RS is a thoroughly engaging and involving drive. It is simply brilliant.