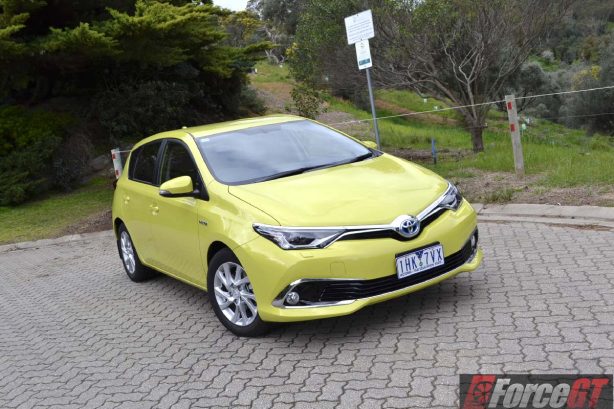 The new Toyota Corolla Hybrid must seem like the answer to a closeted greenie’s diligent prayers, marrying Toyota’s proven hybrid technology with a conventional hatchback that is as distinct as a bathroom tap.

It is the fifth hybrid model in Toyota’s local green brigade, joining the Camry, Prius, Prius C and Prius V.

Available in a single variant priced from just $26,990 plus on-road costs, the Corolla Hybrid is significantly cheaper than the Toyota Prius with which it shares its power and drivetrain. 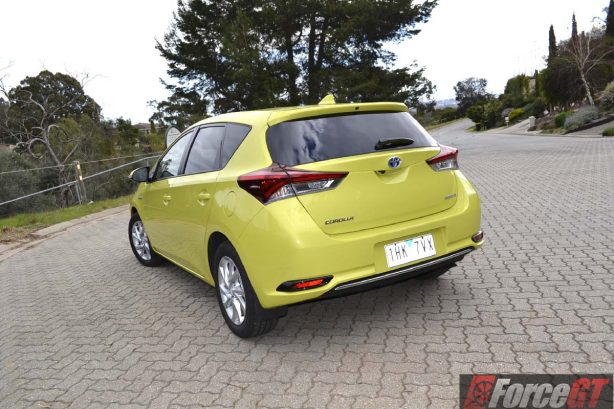 It also picks up many of the features found on the regular Corolla SX and ZR, including 16-inch alloys (from the SX), dual-zone climate control, auto-levelling bi-LED headlights with LED daytime running lights, keyless entry and start, satellite navigation with SUNA live traffic updates and a colour multi-information display.

Externally, apart from a few strategically placed hybrid badges and a blue tint applied to the T-badge, the Corolla Hybrid is ambiguous as the Prius is distinct. That’s by no means a criticism, as the latest-generation Corolla is hardly a bad looker.

Inside, Corolla owners will feel right at home with the largely carried over dashboard. The only difference in the cabin is the loss of the little lidded storage area ahead of the gear lever (the Hybrid gets an electronic gear lever) and hybrid-specific instrument cluster. 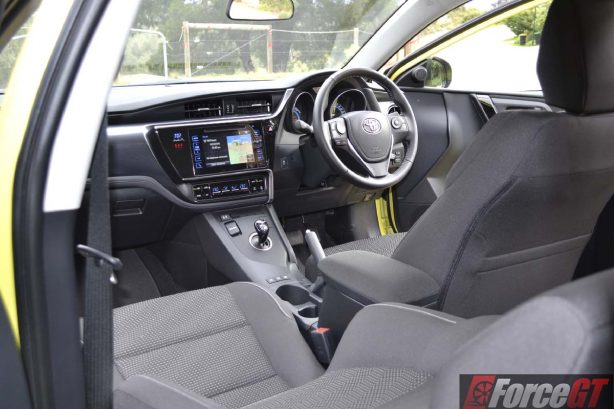 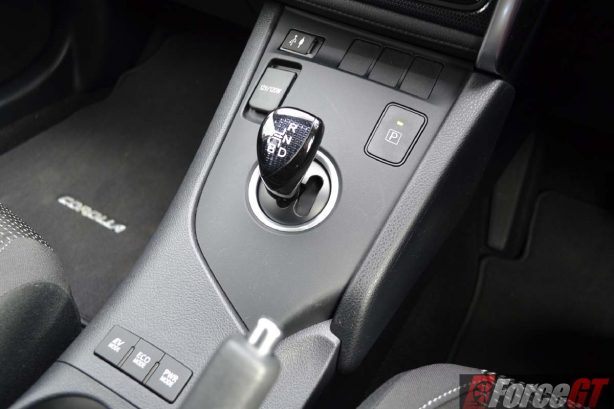 Its seats – upholstered in a dull grey – are comfortable and supportive, while the driving position is good. There’s enough room for four adults, or five if the rear seat passengers don’t mind getting a little intimate.

Crucially, thanks to clever packaging, the Corolla Hybrid retains the standard hatch’s 360 litres of boot space, as the hybrid battery is placed under the rear bench seat instead of the boot.

It is also merely 55kg heavier than the equivalent Corolla SX, while weighing 35kg lighter than the Prius.

The extra power and lower weight contribute to surprisingly good dynamics and handling. The hybrid feels agile and corners with good confidence, no doubt thanks in part to the double-wishbone rear suspension exclusive to the Corolla Hybrid (regular models make do with torsion beam rear suspension). There is some minor body roll but not enough to bother the otherwise well-judged handling. 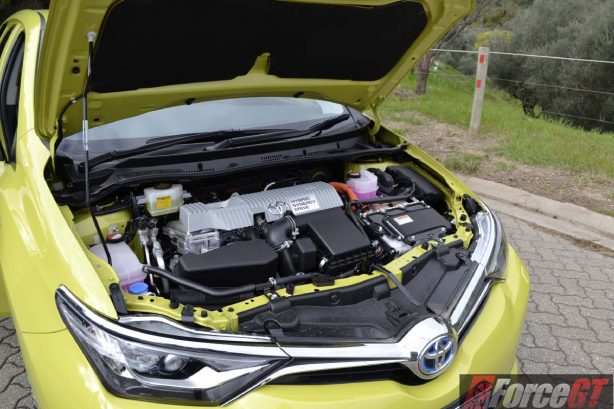 However, don’t expect sports car-like throttle response, as it is dozy even in power mode. Unlike plug-in hybrids where EV mode operates up to 50km/h, the Corolla Hybrid only works up to 30km/h and if, and only if, you are feather light with your throttle. Typical of hybrids, brake pedal feel is lacking and inconsistent.

Nevertheless, those are unlikely to be of matter to the Corolla Hybrid’s target audience, as its main draw card is its impressive real world economy of 5.4 to 5.9L/100km.

It is also no more expensive to service compared to the regular Corolla, as the whole range is covered by Toyota Service Advantage capped-price servicing at a maximum of $140 per service for the first three years or 60,000km.

There’s no doubt Toyota’s proven hybrid technology works. For those who prefer to fill up with petrol but still demand diesel-like fuel consumption, the Corolla Hybrid is just the car for the job.

It is comfortable and easy on the eye without announcing to the world you are a greenie – except if you specify the loud Citrus Lime paintwork as our test car.

The Corolla Hybrid is definitely the pick of the Corolla range.