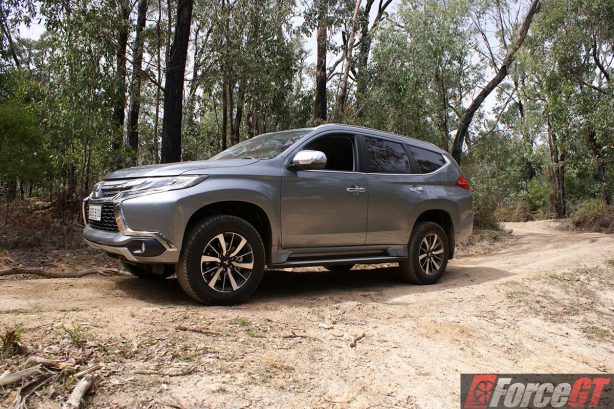 Based on the highly capable Triton platform, Mitsubishi’s all-new Pajero Sport joins the range as a strong competitor in the increasingly popular SUV market.

The 2016 Pajero Sport is in its third generation and replaces the outgoing Mitsubishi Challenger. Three trim levels – GLX, GLS and Exceed – are available, ranging from $45,000 to $52,750 plus on-roads.

The GLX, which we reviewed for this article, is priced at $45,000 and despite being the entry-level variant, it comes packed with features generally expected on more premium variants. 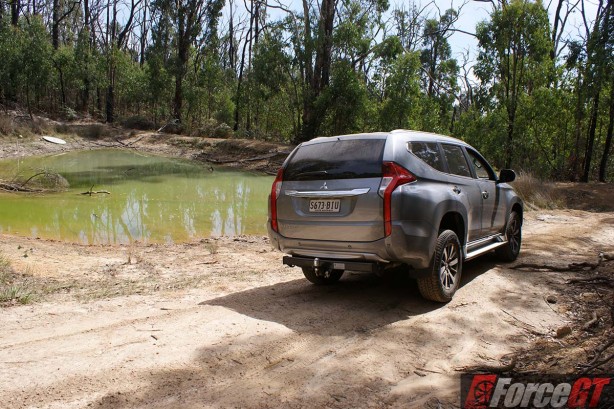 From the outside it’s got that distinctive Mitsubishi styling. The front end has a strong, robust look inspired by the design of the Triton. The sharp angles and long swooping lines give it an aggressive and sportier look over the regular Pajero.

I personally don’t like the rear, to me it’s just plain ugly. It has these strange taillight columns that run half way down the tailgate while being pulled along the lines running through the side. Mitsubishi calls it an eye-catching design, but unfortunately in this case, it’s for the wrong reasons. Initial impressions by others have not been positive, either. However, our Adelaide tester seems to think it looks nice. We will let you be the judge.

The Pajero Sport has decent ground clearance at 218mm. It also has a 30-degree approach angle and 24-degree departure angle along with a 23-degree break over angle. Should you be taking it through river crossings, the 700mm wading depth should keep the water out, too. 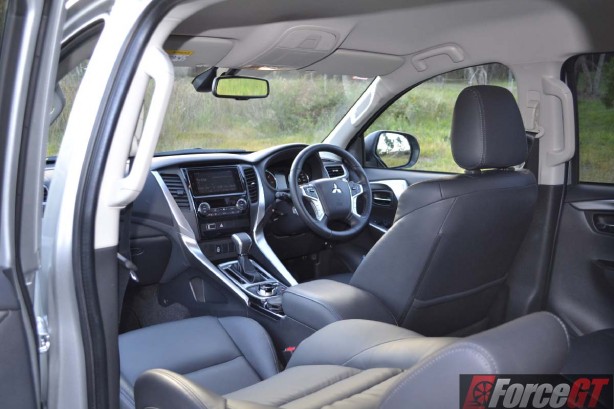 Inside, the Pajero Sport is considerably more refined and elegant compared to the Triton and the outgoing Challenger. The centre console sits high up between the two seats; a trait usually found on high end German vehicles. There is also a good mix of aluminium and piano black trims running up the console. However, the use of cheap/hard plastics on the dashboard cheapen the look slightly.

The GLX model has cloth seat and door trims which are comfortable and provide adequate support. The higher end GLS and Exceed models both benefit from leather seats and trims.

Being a 5-seater, there is more than adequate legroom for all passengers, and rears also have reclining function, perfect for longer trips.

The steering wheel has a nice thick rim and aluminium paddle shifters. Personally, I prefer the paddles to move with the wheel, especially since the lock-to-lock ratio is so much shorter on the Pajero Sport. The fixed paddles make it difficult to shift while mid-turn. 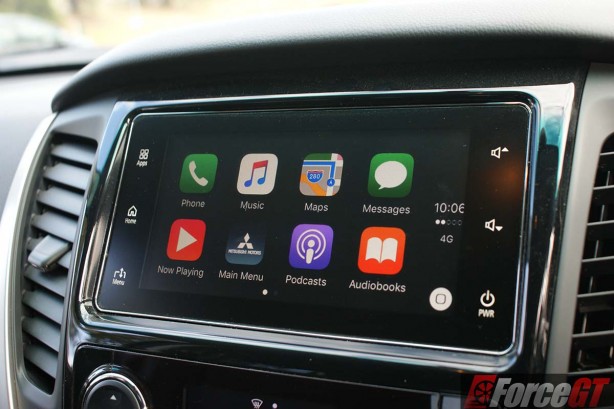 The Pajero Sport’s multimedia interface is a massive improvement over that found in the Triton. The new 7-inch unit features Apple CarPlay along with Android Auto. There is no inbuilt GPS navigation, however CarPlay provides a native interface for displaying Apple Maps. According to Mitsubishi this should “future-proof” the car. Along with native SIRI hands free, most functionality can be operated without ever looking at the display. 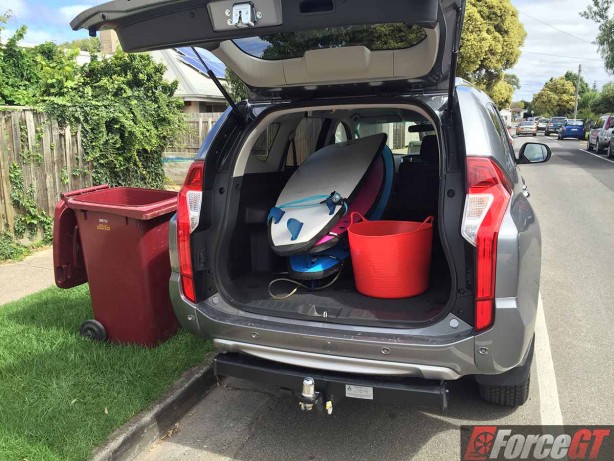 The cargo area is more than adequate at 673-litres, folding away the middle row will increase the storage to a whopping 1,624-litres; perfect for transporting longer/wider goods.

Despite the Pajero Sport only being offered as a 5-seater at the moment, some will find the cup holders in the cargo area a little perplexing. That’s because a 7-seater is available in certain overseas market and is expected to arrive in Australia later this year. 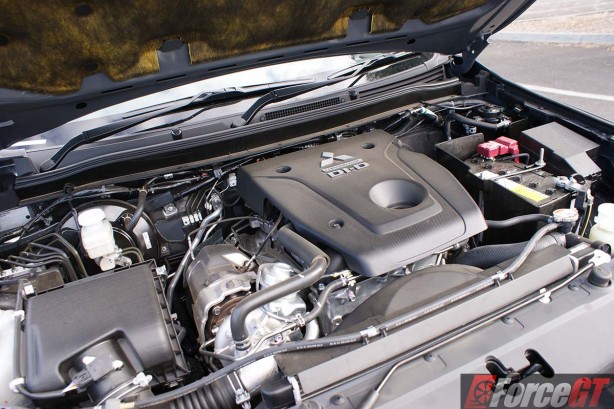 Sharing the same underpinnings as the current generation Triton, the 2.4-litre 4-cylinder turbo-diesel engine produces 133kW and 430Nm of torque at 2,500rpm.

Unlike the Triton, Mitsubishi has thankfully steered away from using the 6-speed auto and instead fitted the car exclusively with an 8-speed automatic transmission. This is the first vehicle from Mitsubishi with the 8-speed and is a much welcome addition.

A major gripe I had with the Triton was the lack of take-off speed in first gear due to a lack of low end torque; the 8 speed keeps first gear short enough to get you into the power bank quicker, making it much easier to drive around town.

The 8-speed gearbox does help with acceleration but tends to run the engine through its RPM range quickly. And unfortunately for us, it doesn’t have a nice note. The diesel is rather brash and sounds like you are driving a mid-sized truck at higher RPM. At cruising speeds, the opposite can be said; its smooth, quiet and ready for acceleration 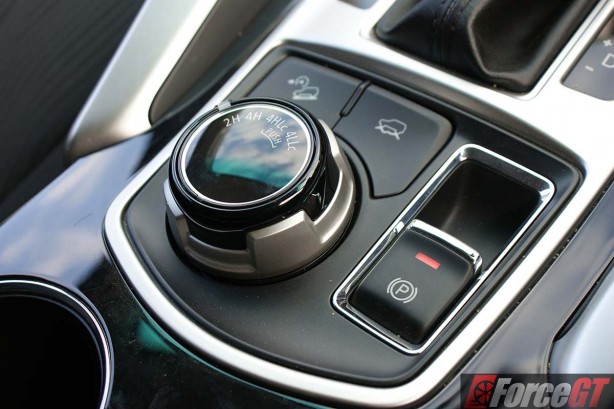 The Super Select all-wheel-drive system allows drivers to match the terrain to a drive mode, whether it be 2H for rear-wheel cruising or 4H for all-wheel drive. For more hard-core terrain, a 4HLc and 4LLc mode can be enabled providing all-wheel capabilities with a locked centre differential in either high or low-range gearing. Not available on the GLX is a rear-differential lock; for that, you’ll need to look at the GLS or Exceed variants.

Similar to other SUV’s in its class, the Pajero Sport also has a terrain selection button, providing on the fly adjustment to stability control mapping. Modes include gravel, mud/snow, sand and rock. However, to enable this, the vehicle must be placed in one of the three 4WD configurations. Its off-road capabilities are aided by hill decent control, available on all 4WD modes including the low-range transfer case option. 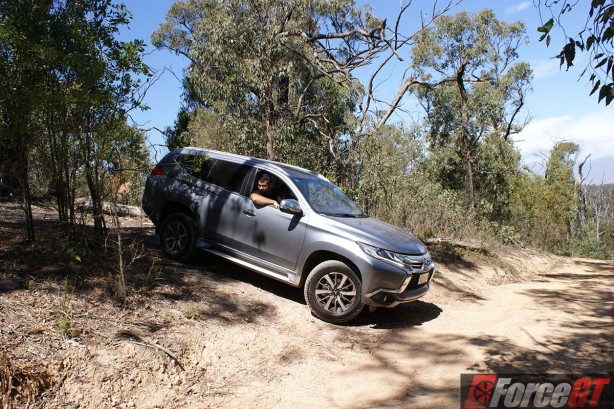 Taken off the beaten track, the Pajero Sport proves it’s up to the task. The AWD running gear provides immense grip while the independent coil spring suspension mellows out unsettled terrain. Despite moving away from a leaf spring suspension, the Sport still retains the 3,100kg towing capacity, similar to that of the Triton workhorse.

The Pajero Sport will happily negotiate some of the harshest terrains even in high range locked centre configuration. We barely required the low-range transfer case. Low range however is properly low, with a set of all-terrain tyres it could easily traverse steep rock terrains.

Hill descent control worked a treat in testing. It would regulate and hold speed perfectly allowing us to focus more on steering and our surroundings.

On the road, it is a fairly civilised cruiser. The cabin is well insulated and road noise is kept to a minimum. The steering wheel is well weighted and has decent feel but lacks directness, a trait that plagues most ute-based SUVs. The shorter lock-to-lock ratio improves handling vastly. The Sport also has an impressive 11.2m turning circle, making it a cinch at parking manoeuvres.

Brakes are adequate for the size of vehicle, they come on early and have good progression through to lock. An electronic parking brake replaces the manual handbrake. 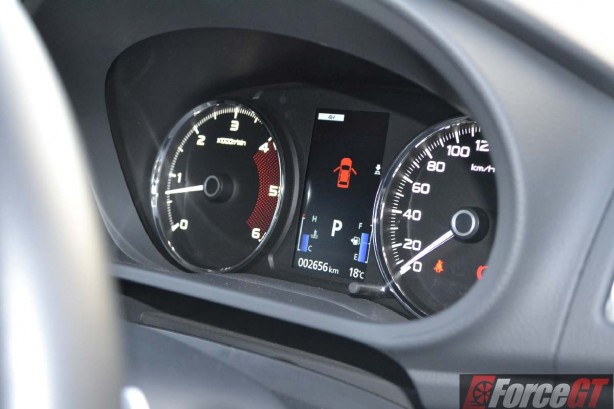 The Mitsubishi Pajero Sport proves it can be a great bush basher while an equally good cruiser to take you from point A to B. It is the sportiest to drive, too, of all the ute-based SUV’s on the market.

Price wise, its cheaper than most of its competitors and comes loaded with functionality right from the base model.

Personally, the rear styling is rather off-putting, however the rest of the vehicle has that strong, robust look I like in an SUV.

The Mitsubishi Pajero Sport is great value for money, and should be on your shopping list if you’re in the market for an all purpose SUV.