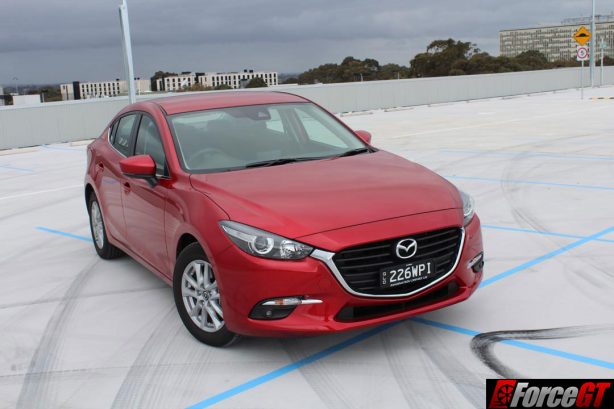 The new Mazda 3 has been released for 2016 with a collection of improvements and added features across the range. Priced from $20,490 plus on-roads, the 2016 Mazda 3 has had a minor face lift where keen eyes will notice reshaped headlights, a chrome grill which extends into the headlight reflector, slimmer indicators and a re-contoured lower bumper opening.

Inside, the changes are more subtle with CD player removal to make room for easier to access USB and audio ports as well as a newer sportier steering wheel.

All models above the Neo come with MZD Connect, Mazda’s integrated infotainment system which is displayed on an easy to read 7-inch touch display. Located in the centre console just before the gear stick you’ll find the multi-function commander which provides a secondary input method for the MZD Connect system, allowing you to easily navigate and control the unit while keeping your eyes on the road. The unit itself feels great to the touch with clearly felt clicks and the software is clearly designed around a rotary dial input method where menus are easily accessible and operable. 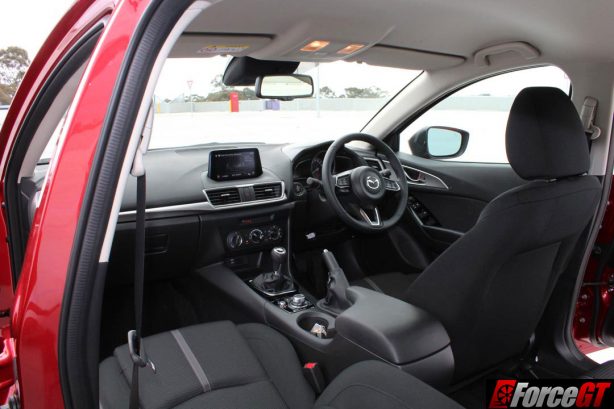 You’ll have no issues finding a comfortable driving position as the steering wheel can telescope back and forth as well as adjust angle, while the seats offer the usual adjustments with height adjustment available, too.

Pedal layout is comfortable and those with big feet and shoes won’t have any issues with accidentally clipping more than one pedal. There’s plenty of legroom and head room for both front seat occupants and the rear seats provide enough room for two adults comfortably with three a cozy affair.

We tested the sedan which has 100 litres of additional rear boot space over the hatch, at 408 and 308 litres, respectively. Additional storage capacity is available with the 60/40 split seats folded down for bulkier objects. The centre console cup holders did their job and frequently housed my smart phone providing quick and easy accessibility. 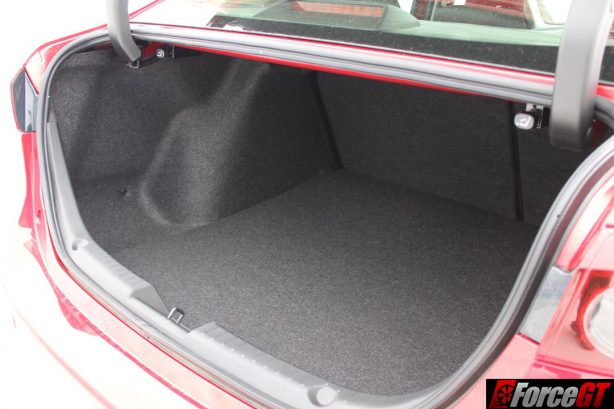 The SKYACTIV-G 2.0-litre Petrol engine generates 114kW of power with 200Nm of torque and does an adequate job of hauling the 1,262kg car around urban environments and cruising down freeways. Power delivery is linear and predictable requiring revs above 3,000 rpm to really get moving, that being said the usable power range is quite wide allowing multiple gears to be used for urban speeds. Overtaking at speed on freeways will require down shifting to get the job done quickly and with a full load of passengers expect the same at lower speeds.

The 6 speed manual gearbox tested felt smooth and had a short throw between gears encouraging spirited driving in the right conditions. However, on colder days some patience is required for the synchros to match until warmed up. Reverse gear is accessed by pushing the stick down and into the top left position so quickly jumping out of reverse into first can be a tricky affair.

The clutch was intuitive, offering a large area for slippage with hill starts never being an issue. 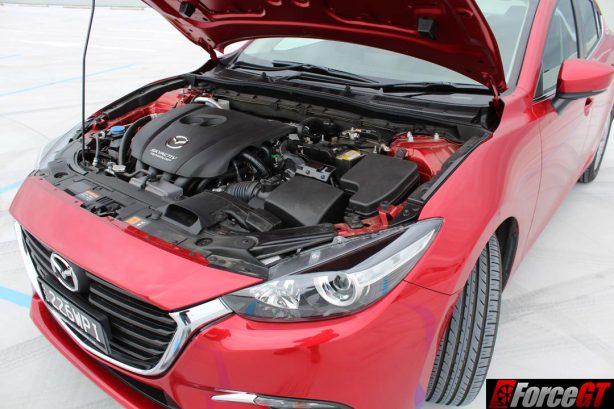 The Mazda3 range debuts a world-first G-Vectoring Control technology for improved chassis balance and turn-in, along with enhanced electric power steering, damper and suspension. And it’s no gimmick. Grip in both the dry and wet was impressive with the car feeling very stable through a variety of conditions.

The car always has you feeling in control and inspires confidence in its handling ability. The feel through the steering wheel was a tad light and I’d have preferred more resistance and feedback. The initial turn in is good but there is a bit of body roll that comes on once the weight shifts; it’s predictable and doesn’t detract from the enjoyment of some spirited driving.

Bumps and bad road surfaces were handled impressively leaving the driver with a feeling of control at all times, while braking performance was on point even after excessive use through hilly terrain with no hints of fade.

In tight streets I’d found myself performing a few more 3 point turns than expected due to the turning circle, if I could only suggest one improvement for Mazda to make it would be to add more steering lock to produce a tighter turning radius.

Mazda have made efforts to improve a weakness from the old model – noise, vibration and harshness (NVH). Regular driving on freeways didn’t produce any glaringly obvious issues with road noise or vibrations. So unless your ears are particularly well tuned you’ll have no problems with the Mazda 3 here. The only vibration issues that were noticeable were on cold days from a stand still, these were minor and quickly ceased once warmed up. 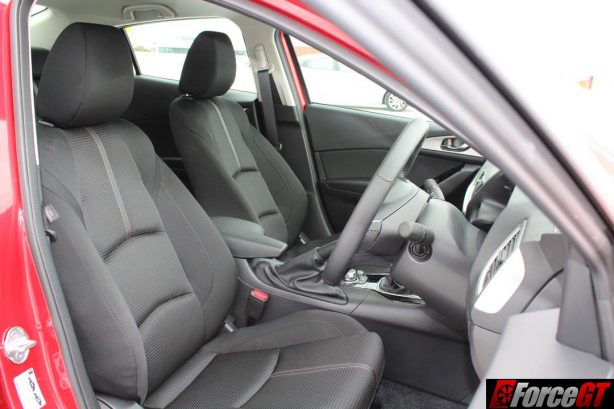 The Mazda 3 looks and feels like a quality car, panel gaps are tight and everything is well put together. On the inside none of the switches, levers or dials felt tacky or brittle though the matte finishing material for the indicators and window switches did scratch easily with the indicator stalks on our test car already scratched up.

Mazda claims the SKYACTIV-G 2.0L Petrol engine will use only 5.7L/100km but we weren’t able to replicate that with an average figure of 7.2L/100km being the final figure. This was a combination of freeway and urban driving with the air conditioning and fan on most of the time. With these switched off the i-stop feature will turn the engine off at the lights and be ready to kick back in the instant you release your foot from the brake.

While unnerving the first few times, you quickly become accustomed to the silence at the lights and it’s never obtrusive when you need to get moving again. With a less aggressive driving style and a few creature comforts turned off a better fuel economy figure is easily achievable. 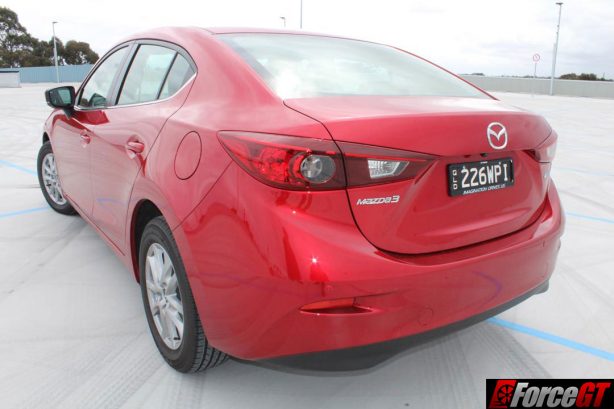 If you get excited over safety and tech gadgets the Mazda 3 Maxx provides a handful of active and passive systems to keep you happy.

Smart City Brake Support (SCBS) is a now a standard feature across the range, with the Maxx and up getting the system for reverse as well. A reversing camera comes standard on the Maxx and significantly adds to the ease of reversing as standard rear visibility out of the sedan isn’t the best with the centre brake light hindering view.

The Rear Cross Traffic Alert (RCTA) system provides ample notice of other vehicles while in reverse, assisting with poor visibility situations when backing out.

Blind Spot Monitoring is also a standard Maxx feature and takes away any uncertainty of lane changes in busy traffic.

Cruise control with steering mounted controls was intuitive and frequently used, brake assist would have been a welcome addition when going downhill but other than that, the system was a joy to use.

The MZD Connect system is a large part of the Mazda 3 experience though only available on the Maxx and above models. A large 7 inch screen makes using the system while driving a breeze with the option of touch screen or rotary dial multi function commander input from the centre console.

Audio from the speakers was crisp and clear with good bass and never overpowered by road or engine noise. It would have been nice to see Apple CarPlay and Android Auto support for the MZD Connect system but overall the system was impressive.

At $22,890 as tested, the Mazda 3 Maxx comes well equipped and is a justifiable premium over the base Neo model. At the lower end of the Mazda 3 range the Maxx is definitely a step up on the base model while retaining that value conscious price point.