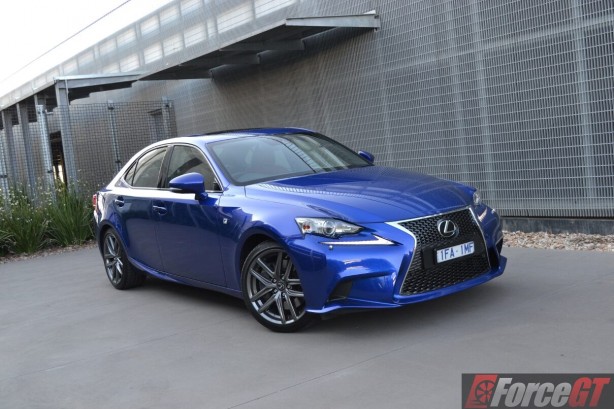 Lexus has finally cast away its long serving 2.5-litre V6 like a pair of worn out shoes, replacing it with the company’s first turbocharged petrol unit.

First made its debut under the chiseled body of the popular NX 200t SUV, the 2.0-litre turbocharged four-cylinder engine in the IS 200t has already found its way into the rest of the Lexus range, from the IS through to the recently launched RX.

While the unit is transversely mounted in the NX to suit its front and all-wheel drive layout, it is turned 90 degrees in the IS for its north-south, rear-wheel drive arrangement. 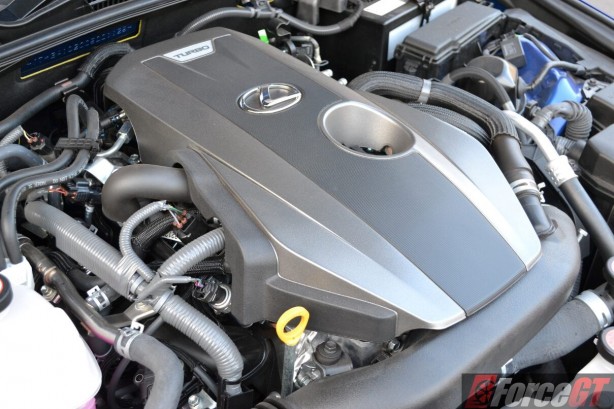 The new engine provides 27kW more power than the IS 250’s V6 and brings torque up by nearly 100Nm to 350Nm, yet sipping less fuel than the outgoing powerplant. Changes to the exhaust layout and engine management system also fetch an extra 5kW of power over the NX 200t to healthy 180kW.

Crucially, it is has more torque than the Mercedes-Benz C250, Audi A4 2.0 TFSI and the new Jaguar XE 25t, and matches them for power.

It is crammed with cutting-edge technology, too, operating on both the fuel-saving Atkinson cycle – usually used in hybrid engines – and the conventional Otto cycle. The late intake-valve closing of the Atkinson cycle reduces pumping losses and boosts fuel economy. 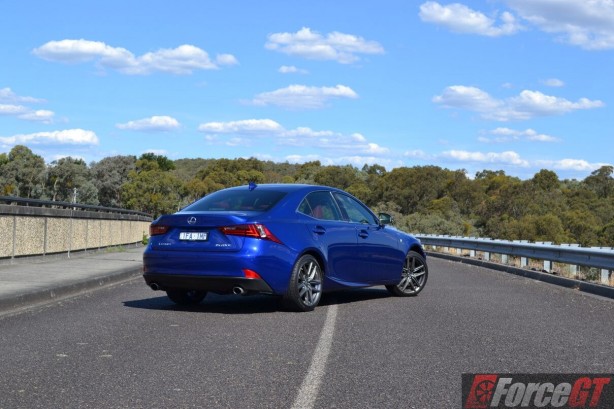 There’s also an engine start-stop function, which shuts down the engine when stationary at traffic lights – Lexus’ first such system on a non-hybrid model. It is lightning-quick in firing up, too. 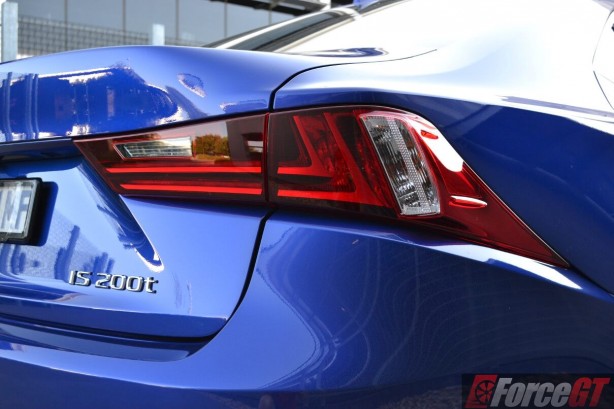 The third-generation IS is already one of the best handling sports sedans on the market, but the new engine and transmission thoroughly transforms the way it drives.

No longer does the car feel languid and heavy. There’s a liberal flow of low-end shove and meaty mid-range, thanks to the turbo engine’s wider spread of torque that is available from 1,650 – 4,400rpm.

Special attention was also paid to minimising turbo ‘lag’ during the engine’s development, including the use of twin-scroll turbocharger and an air-to-liquid intercooler mounted to the engine to minimise the intake volume downstream of the turbocharger for optimised response. The result is crisp and near instantaneous power delivery. 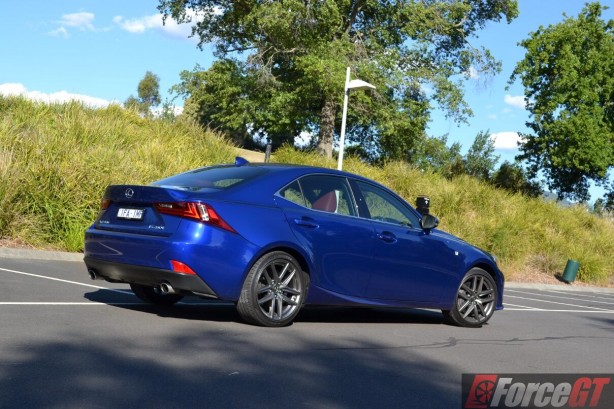 While there are eight gear ratios to choose from, the wide torque band means the engine rarely calls upon the higher gears except on low load and free way driving. The new transmission is also one of the smoothest we have come across, dishing up its ratios in buttery efficiency.

Like the rest of the IS range, the IS 200t comes with the Drive Mode Select system that offers a choice of three driver-selectable modes – Normal, Eco and Sport (Sport S and Sport S+ on F Sport and Sports Luxury models). 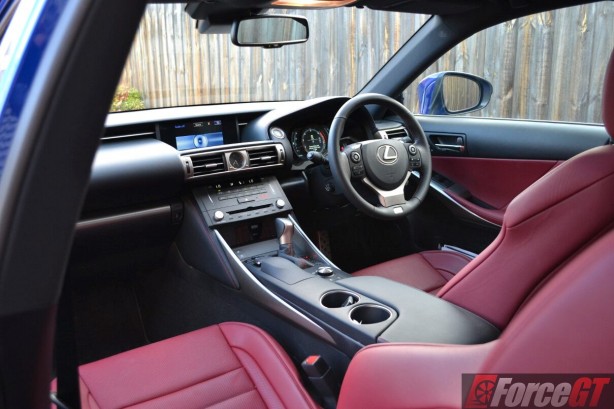 In ‘Normal’ and ‘Eco’ modes, the transmission has a habit of moving up to the highest possible gear in the name of efficiency. This is fine except when you encounter a slope, where the computer takes a while to figure out which of the gears to drop down to, making it seem a little deem witted. It’s programming isn’t as polished as some of its German rivals in this regard.

It is much more alert in ‘Sport’ mode where revs are kept in the meaty part of the torque curve, increasing driveability. It also satisfyingly blips the throttle on down shifts, and hangs on to lower gears when carving corners. The computer even proactively downshifts when braking hard into a corner!

However, some drivers may lament at the pesky computer’s tendency to overrule the driver’s desire to hold gears at the redline. 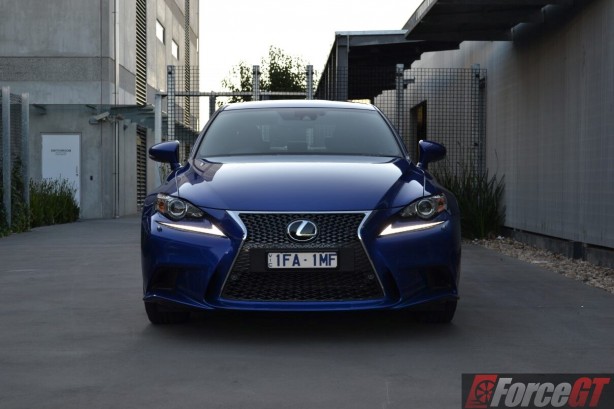 ‘Sports’ mode also brings sharper throttle and steering response while the Adaptive Variable Suspension (in the F Sport and Sports Luxury) tightens up to reduce lean and body movement.

One of the benefits of engine downsizing is of course, better fuel economy, and in this regard, the IS 200t doesn’t disappoint. Lexus claimed the 2.0-litre engine returns 7.5L/100km, which is 1.7L per 100km more frugal than the IS 250. In the real world however, we averaged around 8.0L/100km – still a sizeable difference with the old V6, but not great compared to the parsimonious Germans.

Along with the introduction of the IS 200t, Lexus has also broadened the availability of key safety technology across the IS range as part of an overall specification upgrade.

Headlining the safety technology upgrade is the adoption of the Lexus Pre-Collision Safety System and Active Cruise Control on all IS 300h and IS 350 models. 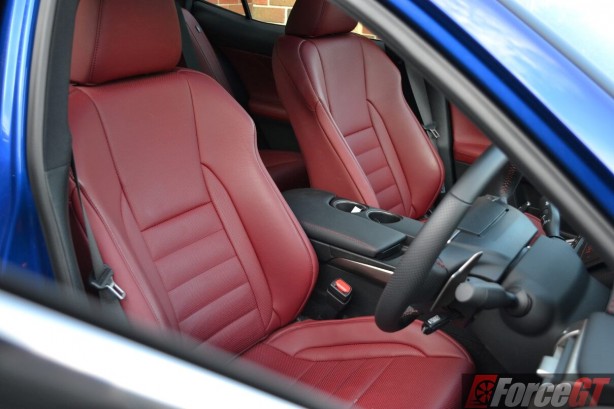 The addition of rear-seat SRS side airbags means 10 SRS airbags are now fitted, while Rain-sensing windscreen wipers, a self-dimming interior rear-vision mirror and eight-head clearance and reversing sonar are now standard across the board.

All IS F Sport and Sports Luxury variants have Blind Spot Monitor with Rear Cross-Traffic Alert as well.

Pricewise, the entry-level IS 200t is $3,500 dearer than the outgoing model at $57,500 plus on-road costs, but this is more than made up for in increased specification, better fuel economy and drivability.

The F Sport shown here is priced from $65,500 and adds a sporty body kits, 18-inch wheels and red leather interior.

The new 2.0-litre turbocharged four-cylinder petrol and its slick 8-speed automatic has transformed the way the entry-level IS drives, making it the best variant in the IS range.

2016 Lexus IS 200t pricing and specification