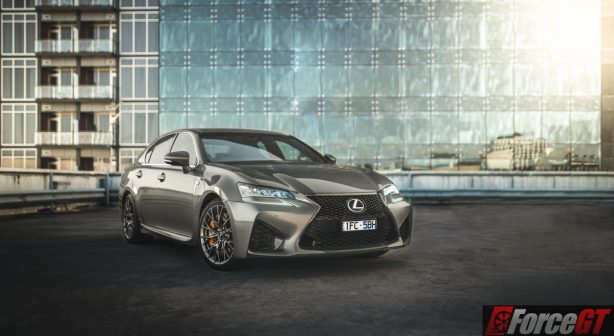 In a world increasingly dominated by turbochargers and tricked twin-clutches, it’s refreshing to see Lexus giving the one finger salute to the establishment and persevere with its large capacity, naturally aspirated engines and torque converter automatics.

Like the Lexus IS F and RC F before it, the GS F is an unconventional kind of performance car; eschewing complicated chassis electronics and expensive turbocharged engines that now define the German triumvirate, for a purer, simpler approach.

Lexus says its main focus in developing the brand’s first full-sized super saloon is on making a proper performance car. One that brings all the senses together – noise, feel and thrill. 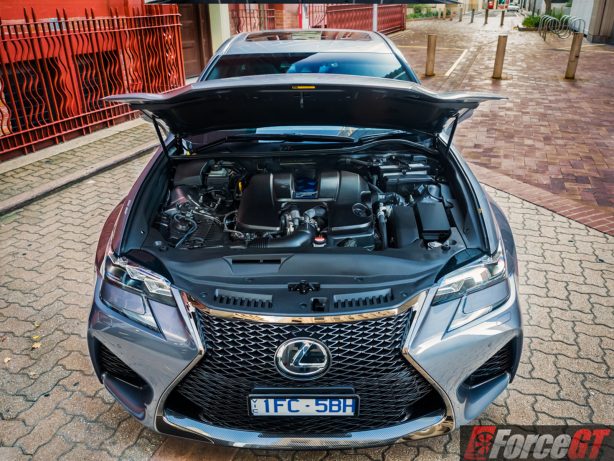 Chief amongst the ingredients that brings everything together is the big lump underneath the GS F’s bulging bonnet – a 351kW 5.0-litre 32-valve twin-cam atmospheric V8. It’s old school. And it’s fabulous. Especially the noise.

The fireworks start the moment you hit the start button on the dash. The engine springs to live with a spit and the unmistakable throbbing growl that only a V8 is capable of.

Plant your foot on the aluminium throttle pedal and you’re off in a puff, rewarded even further with its rousing, baleful bellow that immediately garners the attention of unsuspecting passersby.

Not that the Lexus GS F is demure. 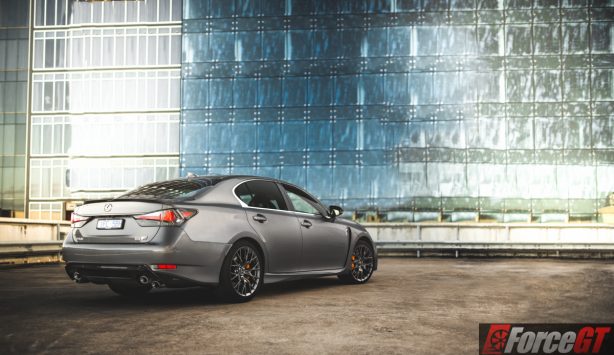 Its judiciously applied body kit is aggressive without being overdone, while Lexus’s gaping spindle grille also suits the sparkling personality of the GS F more than its lesser siblings.

There are lashings of expensive carbon fibre on the lower edge of the grille, and a bit more at the back on the discreet rear spoiler.

If it’s all a little too subdued for your liking, Lexus is more than happy to finish your GS F in the loud ‘Lava’ Mica paint you see in the video below. At no cost, of course. But we’d much prefer the classy ‘Mercury Grey’ metallic paint on one of our test cars you see on this page. 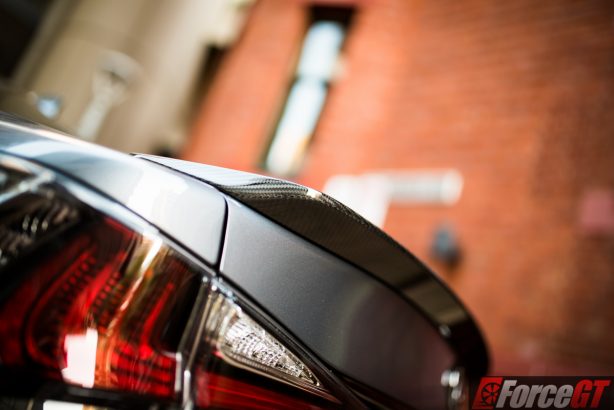 Away from the engine compartment, Lexus has gone to great lengths to give its super saloon the armament it needs to tackle the might of the Germans.

While it may be based on the garden variety GS’s monocoque chassis, new joining techniques and bracing to the car’s body-in-white brings approximate 10% greater static torsional rigidity. 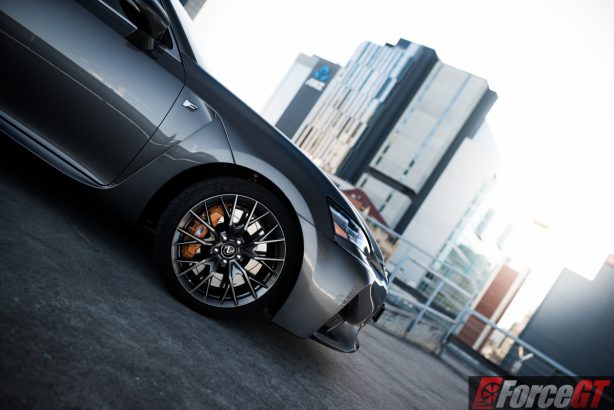 There are giant Brembo disc brakes on all four corners that work well in reining in the horses. They measure 380mm up front, clamped by six-piston opposed calipers, and 345mm rear with four-piston calipers.

If all these sound rather familiar, that’s because the RC F shares many of the same ingredients.

But while the RC F is heavier against its peers, the GS F is actually lighter than its main rivals – the BMW M5 and the Mercedes-AMG E63.

Together with its effective torque-vectoring rear differential (called Torque Vectoring Differential, or TVD), and expertly calibrated stability control system – finally! – the GS F sits flat and points with supreme precision – things high on a driving enthusiast’s list. It never feels edgy, even when taken close to its limits. 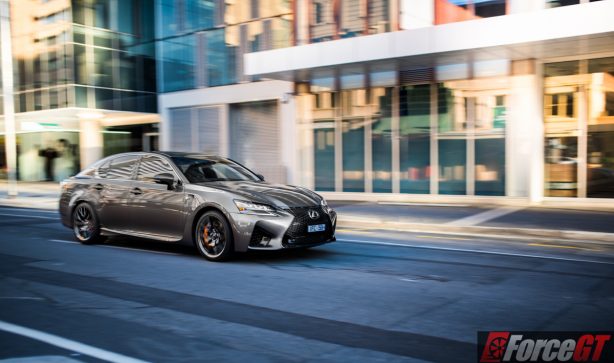 Most of all, the GS F can’t be accused of lacking in driver’s engagement because it is one of the most responsive cars of its class. Its steering is super direct and quick and offers a connection to the road that is relatively rare these days. Its eagerness to change direction also belies the size of the car, while the split-width Michelin Pilot Super Sport tyres glue the 19-inch forged aluminium wheels to the road.

With eight ratios to choose from, the GS F is never in a torque abyss. Lexus has even linked the transmission to a G-sensor to enable it to select the most suitable gear for dynamic driving, although it tends to hang on to lower gears for too long if you’re at more than 75% throttle (in S+ mode, the best mode for enthusiastic driving), forcing you to resort to the paddle shifters to upshift.

Away from the bends though, the transmission is smooth and efficient, exhibiting none of the frustrating traits before. 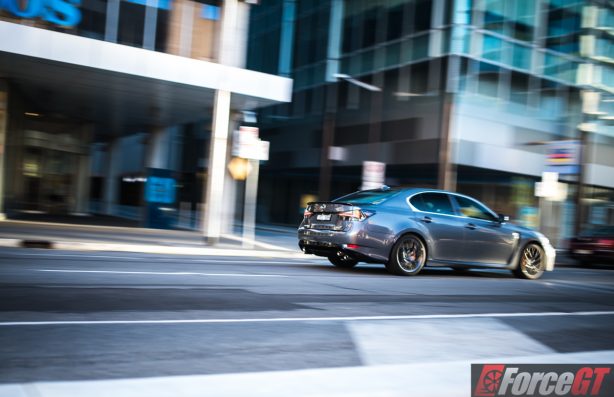 Unlike forced induction engines with a walloping mid-range, the GS F’s 530Nm of torque is delivered with silky linearity, culminating in a rousing, throaty bellow.

And like most Lexus, the sporty GS F is also a comfortable car to drive to the shops when you are not in a hurry. Yes, the suspension is firm, but it’s never harsh or threaten to rearrange your spinal cord every time you hit a bump.

You are also surrounded by quality materials and a premium, driver-focused cockpit. The GS F is the first Lexus F model to feature a head-up display that provides speed, audio information, lane guidance display and Sports Mode Display, ensuring your eyes stay glue to the road. 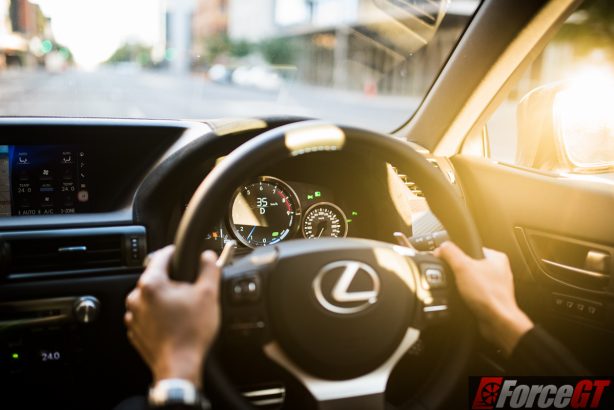 Typical of Lexus, the GS F’s standard equipment list is also pleasingly longer than most of its rivals, with only the premium semi-aniline leather-accented seats ($2,900), high grade polished 19-inch wheels ($2,500) and carbon interior ornamentation ($2,500) the only options.

Frustratingly, Lexus’s infuriating voice activation system still plagues the GS F. It is next to rubbish in its ability to recognise any form of human language. When asked to call Nicol Morrison’s mobile, it replied: “Call Allison McDonald office…” Wtf?

In staying away from the ever-escalating horsepower race amongst its German rivals, and instead focusing on what really matters – driver’s engagement and fun, Lexus has created a car that will change your perception of the brand and a true driver’s car.

It feels agile and nimble like a BMW M3, but is actually M5 in size and shrink wraps itself around you. You don’t need a PhD to set up its chassis or drivetrain to get the best out of it, either, and best of all, it costs less than a Mercedes-AMG C63.

It may be old school but we love it. A lot.