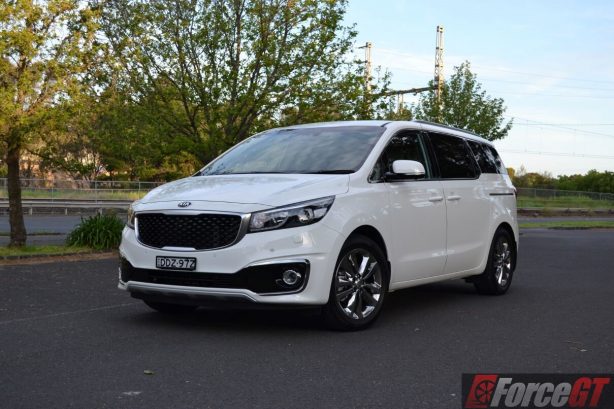 For far too long, big families have been stuck with boxy, uninspiring and drab people movers commonly known as white goods on wheels, until now.

The third-generation Kia Carnival arrives with tons of surprises. For a start, we find ourselves using words like ‘stylish’, ‘striking’ and ‘snazzy’ to describe Kia’s new eight-seater – it’s the first time we use those words on a people mover. Its sheer interior space isn’t something we have seen before. And the way it drives can be best described as startling.

It’s the first all-new model in almost a decade but we are glad to report that it’s time well spent. The new Carnival is almost an entirely different car compared to the one it replaces.

Prices before on road costs range from $41,490 to a rather pricey $61,290 but unlike its petrol-only rivals, the Carnival is available in both a 3.3-litre V6 petrol and a 2.2-litre turbo diesel. While the former is thirsty as expected, the diesel offers much better fuel economy, which is why we chose it for this test.

There’s no doubt about it, the new Kia Carnival looks sharp, even upmarket. It’s arguably the best looking people mover on sale today. We like the imposing yet elegant front fascia. The view from the side is equally sleek and the rear is simple, classy and uncluttered. Its lines are smooth and the whole proportion is as good as a big family van can get.

We like the fact that it doesn’t try to look like something else. The design is upfront and non-pretentious, like it’s trying to say “I’m a people mover but I’m still cool”. Well done, Kia. 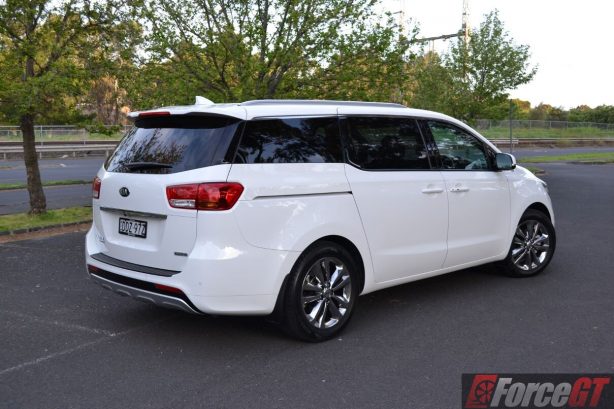 For easier parking, the new Carnival is slightly shorter and lower than before, but sits on a longer wheelbase for the benefit of interior space.

In the company of the Honda Odyssey and Toyota Tarago, the Carnival boasts the largest cabin, though the Hyundai iMax is still larger, if you consider that a valid family hauler.

Seating arrangement is two-three-three with generous headroom and legroom for all rows. It’s good to see Kia opted for a car-like first row seats where, unlike the other competitors, the arm rest isn’t attached to the seat but on the centre console much like in a passenger car. This way the arm rest is lower, wider and doesn’t get in the way. The front seats are also wide and comfortable with thick bolsters providing good support.

The middle row seats are flat but cushy. They slide forward and backward individually to trade off on legroom in the third row. What’s impressive is the way the outward seats fold forward and upright at the pull of a lever to ease access to the third row. Getting into the back still requires a bend of your body but the liberated passageway is much wider than those of its rivals.

The third row pews are still wide enough to fit three adults though they may feel the bumps on the road more than those seated at the front. 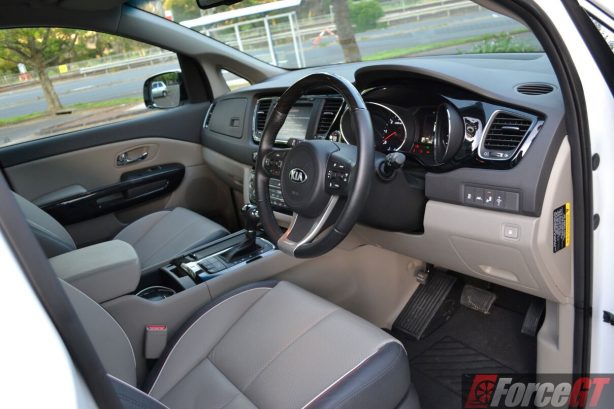 With the rear seats up, there are still 960 litres of cargo space at the back, plenty of room for bulky items and luggage. It’s impressive how you can take eight people and still have so much room for storage.

The third row seats fold into a recessed in the boot floor to create a truly enormous and flat cargo space. Folding the middle row seats expand this space even further.

For added convenience and comfort there are retractable blinds for second and third rows in the Platinum variant (tested) and the second row middle seat can be folded if needed. Roof mounted air con vents for the last two rows keep everyone happy.

There is no shortage of storage compartment around the cabin. We are talking ten cup holders, two gloveboxes, a handy storage pocket on the passenger side of the centre console, large storage under the centre armrest and nets on the front seat backs for all your mobile devices.

The 3.3-litre V6 petrol engine produces 206kW and 336Nm while the 2.2-litre turbo diesel unit develops 147kW and 440Nm. Both engines drive the front wheels through a six-speed automatic transmission.

Despite the power deficit compared to the petrol, the diesel’s strong 440Nm of torque is better suited for hauling the 2 tonne plus Carnival around. It’s our pick between the two powertrains for its effortless acceleration and good fuel economy. 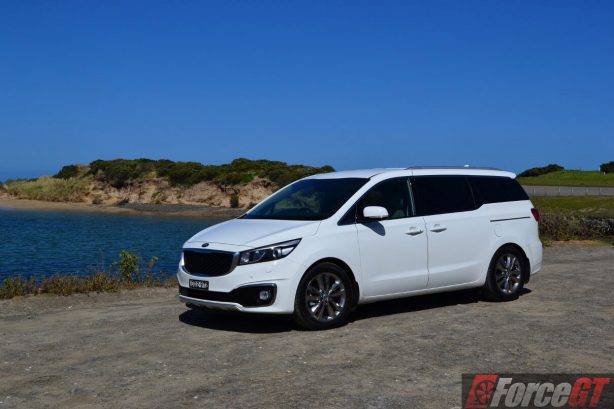 Even with a full load of eight people on board, the diesel virtually had no issue ascending a steep incline during one of our road tests. In fact, you might struggle from lack of front wheel grip before the power even became an issue.

The diesel mill may not be as smooth as the petrol but it’s far from coarse. Once settled, the diesel is very refined and quiet in its operation.

It’s also a good match with the six-speed auto, which serves up the right ratio in most proceedings, tapping well into the diesel’s abundance torque reserve. Its shifts are also smooth, if not a tad slow.

While dynamics aren’t something we put weight on for a vehicle of this type, but it’s worth mentioning that the Carnival doesn’t feel much of its size around the bends, delivering tidy handling and great road holding that is quite rare in this segment. Its steering, however, feels lofty and disconnected though still fairly precise. The brakes are adequately strong and progressive. 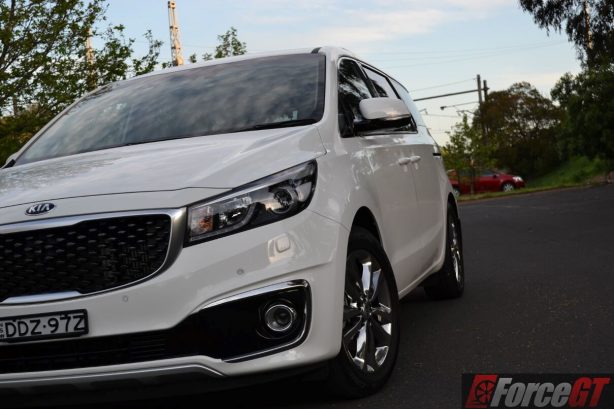 Around town the Carnival offers a plush ride thanks to its heft and relatively soft suspension. At speeds though it can feel a bit lumpy and bouncy on high frequency bumps.

There isn’t much wind noise despite its substantial size and road noise is well suppressed on most surfaces.

We often find Kia’s lane guidance system too sensitive and occasionally interpreting the wrong lines as lane markings. And sadly the Carnival is not an exception. Its auto high beam function is also often defeated by reflections.

There is no arguing Korean cars these days are as good as, if not better, than their equivalent Japanese or European counterparts.

Fit and finish in the latest Carnival is good, with a hefty and robust feel to all switchgear. It’s a real step up in terms of quality and materials, too. All panels are well aligned and gaps are miniscule, while the doors open and shut with a suitably sturdy feel. 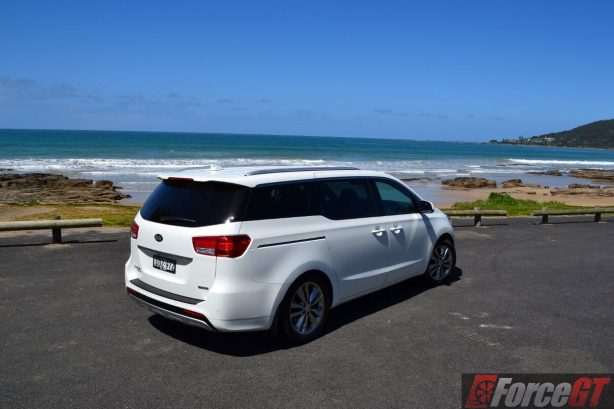 Over our weeklong test clocking over 1100km of mixed city, freeway and country driving (most of the time with 6 adults on board), the Platinum diesel returned an impressive 8.6L/100km. This is against Kia’s claim of 7.7L/100km.

With a large 80-litre fuel tank the Carnival should yield an approximate cruising range of at least 1039km in the real world, making it a fuss-free long range tourer.

Again, compared to the thirsty petrol, which is rated at 11.6L/100km, the diesel is a much better option in this department.

Kia’s have traditionally been rather well equipped and we are pleased to report the new Carnival range packs even more equipment than before.

Moving up to the Si and SLi variants gets you more gear, including rear air con controls. 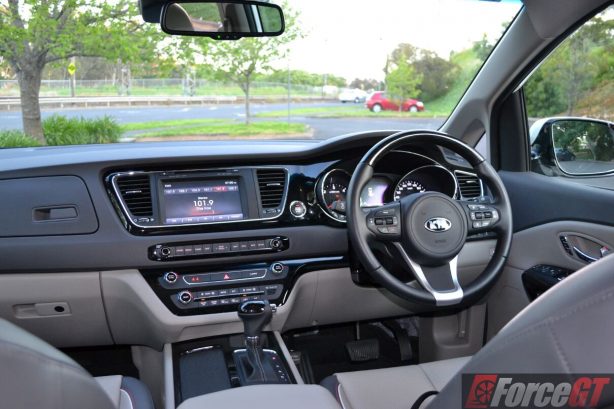 Digital radio DAB and Apple Carplay / Android Auto smartphone connectivity are missing however. As the flagship model, we expect these to be standard.

The 2016 model has been recently awarded with a 5-star ANCAP safety rating.

The diesel is the obvious choice if you care about fuel economy and the mid-spec Si and SLi models strike the best balance between features and price.