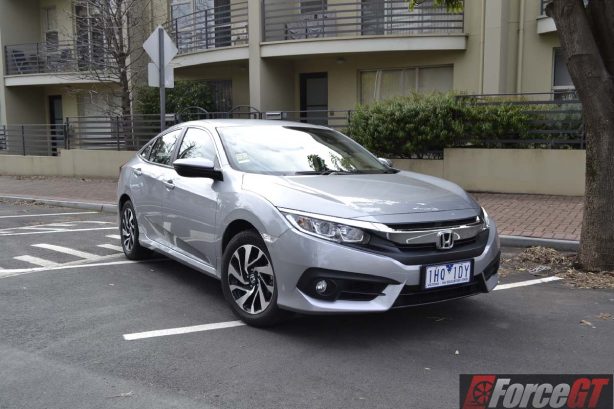 That’s Japanese for ‘Welcome back!’ if I was to trust Google Translate and it’s exactly what it feels like for the tenth-generation Honda Civic.

It has only taken about a decade for Honda to wake from its dozy slumber but the Japanese giant is back.

You see, Honda used to be the technological leader for Japanese cars. I still recall the brilliant free-revving VTEC engine in the Civic from the mid-90s and the lift back sedan shape that is now common as Sushi Train.

And who could forget the astonishingly superb and cutting edge first-generation NSX that is still revered today.

While the technology behind the latest 2016 Honda Civic isn’t ground breaking like its early forebears, it is the most convincing Honda I’ve driven for a while; from its brand new turbocharged engine to one of the best behaving CVTs ever (Yes, I know. I can’t believe I’m saying this either!). If the latest Civic is a preview of things to come, then we can’t wait.

The line up in Australia is available in five variants, kicking off with the 1.8-litre VTi priced from $22,390 plus on-roads and tops out with the 1.5-litre turbocharged VTi-LX from $33,590 +ORC. Headlining the new range is the sports-infused RS which sits below the VTi-LX. Priced from $31,790 +ORC, it shares the latter’s engine while adding an integrated body kit for a bit of athleticism. 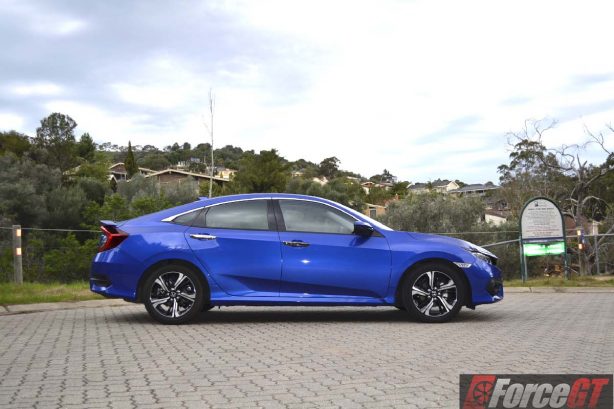 With a sporty, fastback stance, the new Civic’s design is the most dramatic yet. Its aggressive new face is highlighted by a chrome-plated grille that runs the full width of the front fascia, extending to the top of the slender headlights in what Honda calls ‘solid wingface’.

In profile, the sharply creased shoulder line surges over the rear wheel arches, reaching out to the upper bend of the distinctive LED taillights. In combination with the upswept lines on the doors and sweeping roofline, the new Civic has the dynamism and sporty styling to stand out from the crowd.

The RS is further enhanced with a handsome body kit with striking blacked out grille, LED headlights, LED front foglights and larger 17-inch alloy wheels (LX gets 17-inch alloys, too). 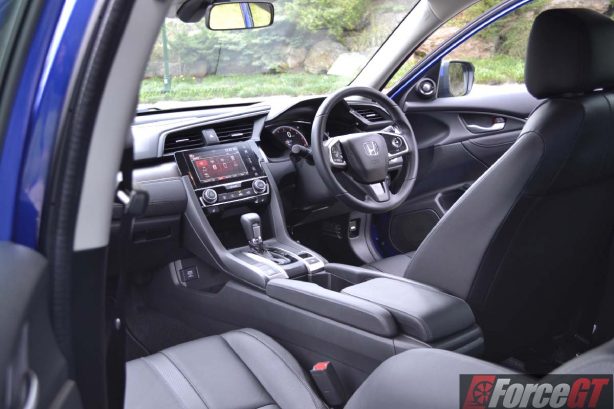 Inside, the two-tier dashboard of the outgoing model has been replaced with a modern cockpit complete with a clear, one-piece digital instrument panel. Most contact points also have soft-to-the-touch materials while specks of aluminium-look trim lighten up the cabin.

Both front seats are comfortable but some, like myself, may find the lack of lumbar support a pain in the back. Literally. Uniquely, the driver sits low in the new Civic, giving it a sportier feel, too.

The party piece comes in the form of a grooved, touch-sensitive volume control on the steering wheel, where you swipe your fingers up or down the surface to either increase or lower the volume. 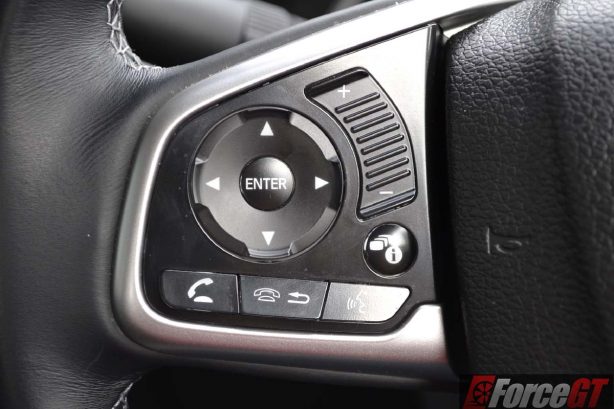 A new space-saving electronic parking brake replaces a conventional hand brake, freeing up room in the centre console to accommodate a larger armrest and deep storage space. Grip-surfaced storage compartments are aplenty beyond the gear lever, including one hidden beneath for keeping items away from prying eyes.

The cabin feels light and airy with good over the shoulder visibility, augmented by standard reversing camera with dynamic guiding lines.

The redesigned dash also provides greater knee room for the driver, while rear-seat foot room has improved, thanks to an increase of 27mm in the space between the front seat rails.

However, rear seat passengers might feel slightly short changed due to the lack of rear air-con vents.

With 517 litres of boot space, the Civic sedan’s cargo carrying capacity trumps that of the Mazda3 Sedan, Toyota Corolla and even the Holden Commodore’s 495 litres. Its flat boot floor can be further expanded via the 60/40 split folding backrest. 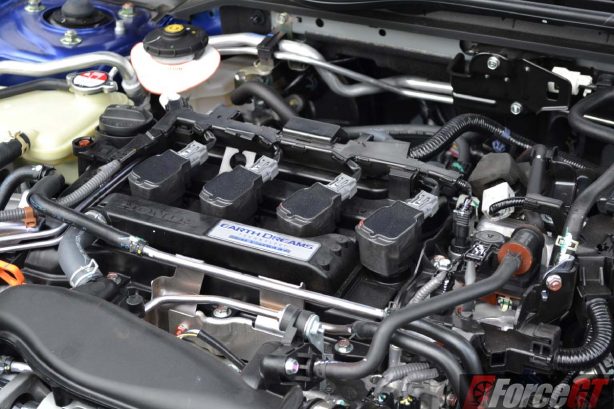 Both are mated with a new CVT (no manual is offered on the new Civic range) that is expectedly smooth, yet refreshingly well sorted at around town speeds, with none of the droning and revs flare that we come to expect from such transmissions.

However, they are still not entirely convincing for enthusiastic driving, especially when matched with the more muscular 1.5 turbo despite paddle shifters that try to bring a semblance of driver engagement to the fore. 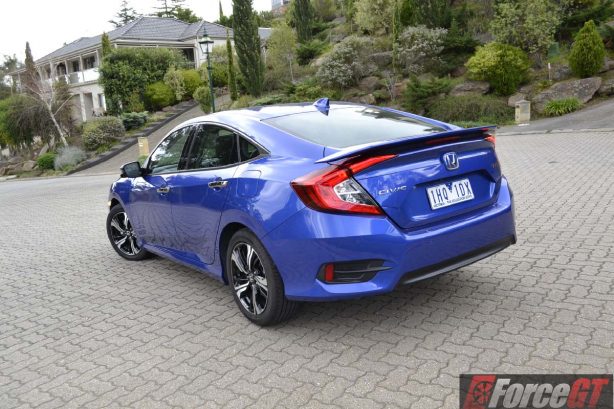 Driven hard, the gearbox steps down rather abruptly, while its stepless characteristic means you won’t be rewarded with the dramatic upshifts bangs and downshift throttle blips that you get with a conventional auto and dual-clutch connected engine.

On the plus side, both engines are refined and responsive, although the turbo mill is still plagued with some lag low down.

On the move, its steering is direct and relatively quick but could use with a bit more feel. Its ride is also more compliant than ever, although some body roll is evident around the bends. Nevertheless, this is the sharpest, most confidence-inspiring Honda we have driven in a long time (besides the now discontinued CR-Z) and could give the benchmark Mazda3 and Volkswagen Golf a run for their money.

But the biggest improvement by far, is the car’s refinement. The new Civic is quiet around town with both engine and tyre noise well suppressed.

The VTi-S rolling on 16-inch wheels is cushy without being floaty, while the 17-inch equipped RS and LX ride a little firmer but also grippier. 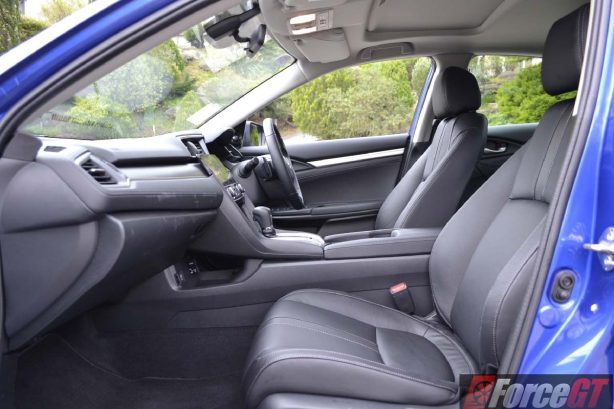 Built quality of the Thai-sourced Civic is generally good, with tight fitment and well-aligned panels, though one of our test vehicles has a minor rattle from within the dash, which became annoying after a while. The lack of “soft open” for the glove box is another oversight in an otherwise very well presented cabin.

We also experienced a gremlin in the new electric park brake system where it refuses to engage if we activate it too quickly after turning off the engine (with auto hold on). It would work if we waited for 2 seconds before pulling the lever. Honda Australia is currently investigating the issue and we are still awaiting an outcome as we write this review. 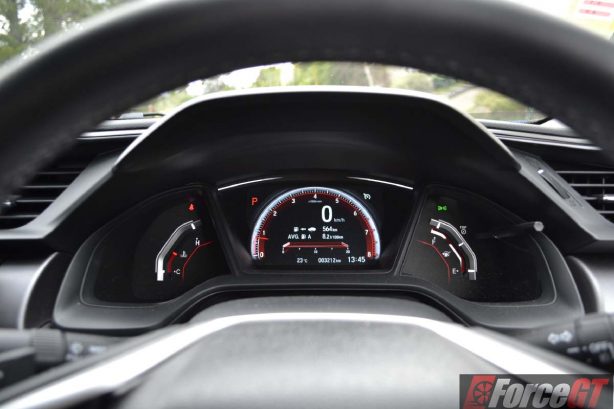 On the freeway, both engines hover around 4L/100km, giving excellent out-of-town range. 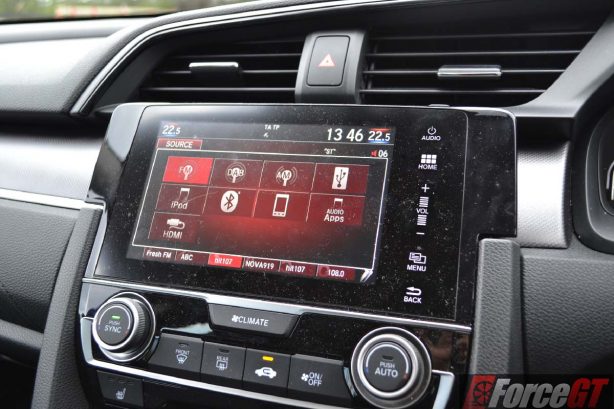 Like most new cars these days, the Civic is generously equipped. All variants get LED daytime running lights, taillights with LED light bars, cruise control (VTi-LX gets adaptive cruise control), climate control (dual-zone on VTi-L and above), auto up and down power windows (front only for VTi and VTi-S), 7-inch touchscreen with Apple CarPlay and Android Auto, Bluetooth and USB.

Also standard on the VTi-S and up is Honda’s rather gimmicky LaneWatch feature which offers a camera view of the passenger-side roadway on the center touchscreen when the left indicator is engaged or the LaneWatch button is pressed. Can we stick to a conventional Blind Spot Monitoring system please, Honda?

It is also the only model with embedded satellite navigation system, with the others relying on data zapping mobile map.

Honda has done a terrific job with the bold-new 2016 Civic Sedan. While keen drivers should make a queue for the RS with its punchier and sweeter sounding 1.5-litre turbo, the VTi-S is the sweet spot of the range, with decent dynamics and good refinement.

It may have a carried over 1.8-litre engine but it’s quieter and feels more in tuned with the CVT while ceasing only slightly in terms of driving enjoyment.