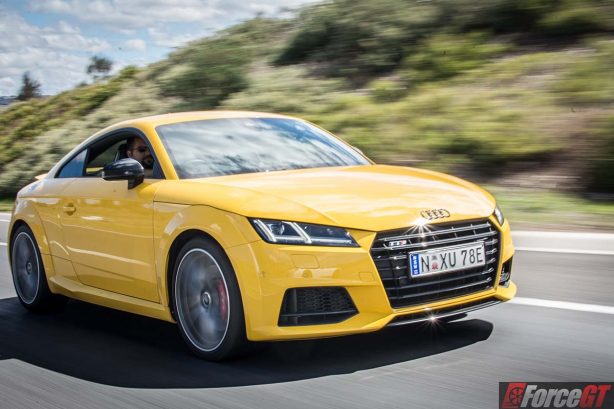 Captivating audiences since 1995, the Audi TT has always stolen the spotlight. Its curvaceous yet sporty lines came well matched with its predictable dynamics, making it one of the world’s best driver cars.

21 years later and into its third generation, we review the 2016 Audi TTS; a middle ground performance variant between the stylish TT and upcoming TT RS. 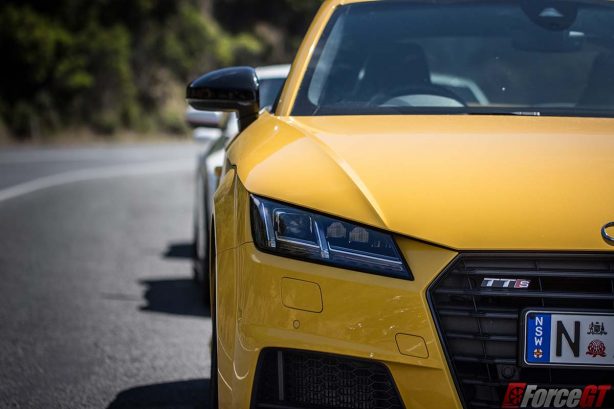 This particular TTS won’t fly under the radar, regardless of where I drove it people would stare in awe. With a design loosely based on the Audi R8 and its $700 Vegas Yellow paint job, it quickly distances itself from the sea of everyday commuters.

The new coupe sheds its predecessors bubbly hairdresser style for a more aggressive attire. Similar to the Audi R8, the brand’s four-ring logo has moved to the lower section of the bonnet, it also shares a broad, flattened grille flanked by a set of trapezoidal headlights. The vehicles prominent wheel arches give it a muscular stance with the front arch breaching the bonnet and flowing along the vehicle, creating a strong body shoulder.

Audi really wanted to set the stage by pairing the most vibrant optional colour available along with the $6,300 styling upgrade. Included in the ‘S Performance Package’ is a stunning set of 19-inch 5-twin spoke wheels, matte titanium trims, privacy glass, LED matrix headlights, and red TTS labelled calipers… But if the S package wasn’t aggressive enough, an additional $1,100 upgrade gets you blacked out exterior trims and mirror housings. 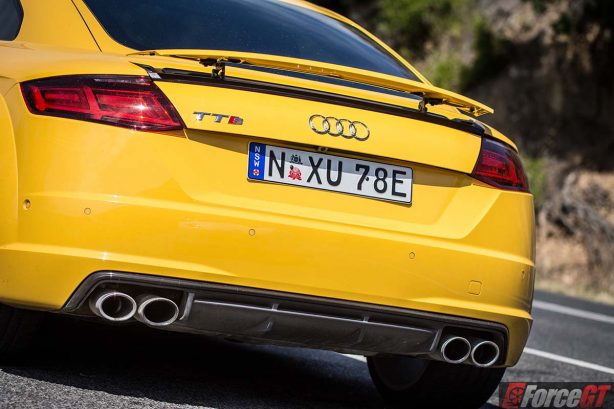 Rearward, the strong horizontal lines give an impression that the new TT is wider than before despite becoming marginally thinner than its 2nd generation brethren. A new air diffuser provides much-needed down force while the drummy quad exhaust hums sweet music around town. S performance optioned TT’s also benefit from dynamic turn signals as found on the Audi R8.

By far one of my favourite features is the electronic spoiler embedded into the boot lid. At speeds exceeding 120km/h, the spoiler extends improving down force. Great if you’re on track or the Autobahn but not so fun on our slow 110km/h capped roads. Thankfully there’s an override to prop the spoiler up at any speed. Though there is no performance benefit at low speed, I’m happy to compromise the usefulness of my rear view mirror to show off this Porsche-inspired showpiece.

At 4.18 meters, the Coupe is almost the same length as its predecessor, though its wheelbase has grown by 37mm to 2,505mm, making for especially short overhangs. It’s 10mm thinner than gen-2 with a width of 1,832mm and carries over the same height at 1,353mm. 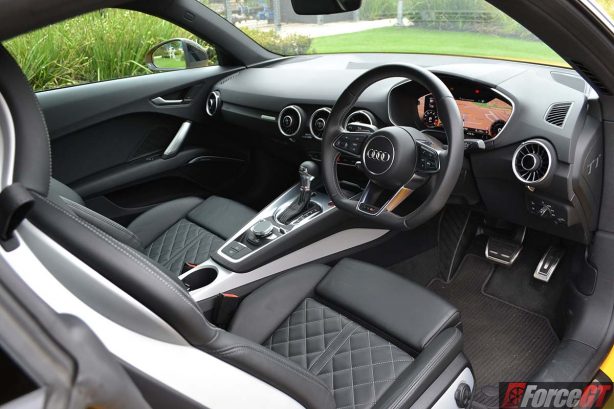 The cabin is one of the best in the industry. Its concept like design features a high rising console and dash that wraps around the driver. The interior is composed of a collection of soft textured plastics, brushed aluminium, matte alloys and leather trims.

Likened to your high-end Italian supercar, these lavish cross-hatched leather bucket seats come standard on the TTS. The seats feature integrated head restraints and pneumatically adjustable side bolsters, keeping you well planted under heavy cornering. While the seats provide great lateral support for spirited driving, they are less than comfortable for longer trips. Driving for longer than an hour caused mild back discomfort, requiring a stretch or a short walk to resolve.

The new steering wheel feels great to handle. The grips are fuller and the flat bottom provides greater clearance from the legs; a much-welcomed addition for taller, wider drivers. I particularly like how visually light the steering wheel appears, thanks to the 40% smaller driver airbag. Behind the horizontal spokes are two adequately sized shift paddles. Wheel mounted controls are well placed and intuitive to operate.

As part of the S package, the audio system gets an upgrade to a Bang and Olufsen 9 speaker system. This is by far the best in car audio system I have ever listened to. The audio is clear with no observable clipping right to the amp’s limits. The subwoofer is well suited to the system and perfectly in tune. 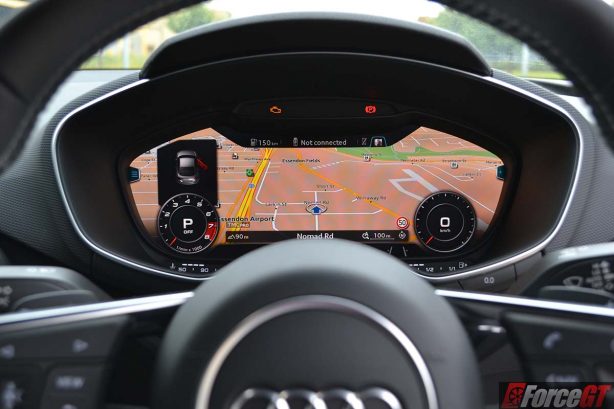 The interface and remote control dial are not immediately intuitive and without prior investigation can become a distraction while driving. Personally, I found navigating the Virtual Cockpit easier relying only on steering wheel controls as it’s possible to access and alter every parameter directly from the steering wheel. In my opinion, the only benefit of the remote MMI controls was the integrated touchpad allowing for characters to be drawn instead of selected. However, don’t attempt to draw a 5 as it will almost always be misinterpreted to an ‘S’.

The air conditioning controls have been cleverly integrated into the turbine inspired air vents. Twisting the inner dial controls strength and temperature while the outer rings change the direction. 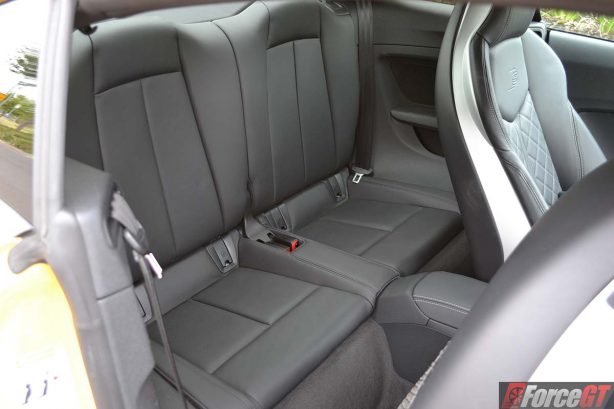 The TTS comes in a 2+2 seat configuration. And while Audi may consider the TTS practical, realistically it is not. The rear seats are borderline useless, they won’t fit a full-size adult and even children would feel cramped. The sloping roof prevents rear passengers sitting upright while the lack of legroom forces the front passenger to sit unrealistically forward. In all honesty, I wouldn’t feel comfortable having rear passengers especially considering there are no airbags.

The TT’s official ANCAP score stands at 4-stars with regulators penalising the vehicle for “inadequate child occupant protection”, however the vehicle did perform well across other tests.

As expected, the boot storage leaves much to be desired, with a total capacity of 305-litres you will struggle to fit much more than a backpack or groceries. Nevertheless, you still gain 13-litres over the outgoing model. 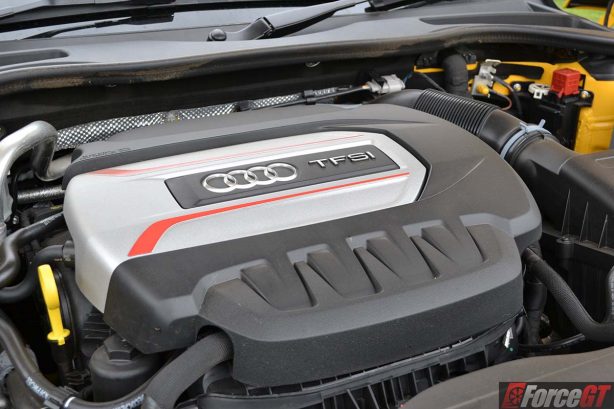 Under the bonnet, power comes from a 2.0-litre four-cylinder TFSI engine producing an impressive 210kW and 380Nm of torque.

Arming launch control and stomping the accelerator sinks the four-wheels into the tarmac, rocketing the TTS from 0-100km/h in an incredible 4.7 seconds.

The Quattro all-wheel-drive system is a work of art in itself. While mostly front-biased, it features an electronically controlled multi-plate clutch that can direct up to 100% torque to the rear axle, allowing the driver to become a little more creative in sweeping bends.

Audi’s Drive Select system comes standard on the TTS, providing a set of modes that suit most driving styles. Selections include Auto, Comfort, Efficiency, Dynamic and a final ‘Individual’ mode that allows the driver to tailor the vehicle’s dynamics to his/her preference.

Setting the drive mode to Auto is generally the best option for everyday driving, the throttle curve isn’t too aggressive yet remains responsive enough to get you out of tight situations. Throttle mapping isn’t the only parameter altered by the Drive Select system, certain modes also alter the Quattro’s torque distribution, steering weight and gear transition speed.

In modes like Comfort and Efficiency, the torque remains largely front biased with smooth gear changes and a heavily sedated throttle response while sitting in higher gears. 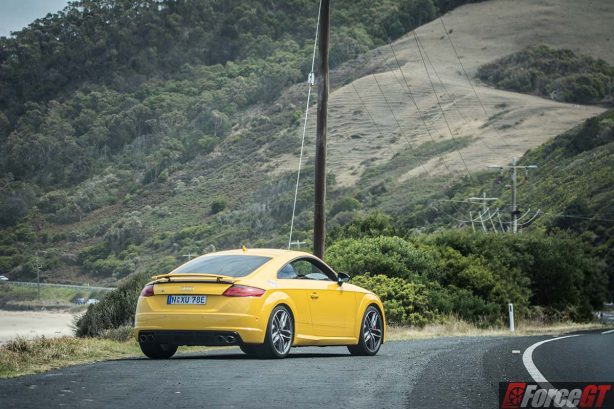 Under normal driving conditions, the engine remains smooth and silent with the S tronic transmission shifting seamlessly between gears.

Putting the engine through its paces, peak torque can be achieved at a reasonably low 1,800rpm. The engine pulls hard right through to 5,200rpm where shifting gives off a satisfying DSG poot.

With Dynamic drive selected, the steering sharpens and becomes adequately weighted, while the all-wheel-drive system changes the vehicle’s personality, sending more torque to the rear axles under hard-driving. The is hugely confidence inspiring, with almost endless grip that encourages you to stay on the throttle longer.

The TTS feels extremely well planted through tight bends, aided by the Quattro AWD system that keeps the car neutral and agile without the risk of running wide in tight corners. Its large diameter brakes are also powerful and effective.

Regardless of mode, the magnetic dampers do a great job of mellowing out most road conditions. While it prefers the smoother surfaces, the coupe remains composed through unsettling mid-turn bumps.

Despite the strong performance, it still returned a reasonable fuel economy. Audi claims the TTS will achieve a fuel economy as low as 7.7L/100km. On test, it manages 10.5L/100km. While not close to the claimed score, it is a decent representation of mixed city, freeway and spirited driving.

There are few cars I’ve felt a genuine attachment to. Much akin to my own car, I found myself constantly looking back in admiration, reminiscing on the drive I just had and with an utter temptation to go for another joy ride.

It won’t win any awards for practicality, nor is it affordable to the masses. At a starting price of $99,900 it quickly shifts itself out of many markets. However, for the passionate drivers with deep pockets, I give you my personal guarantee that the TTS will have you smiling.