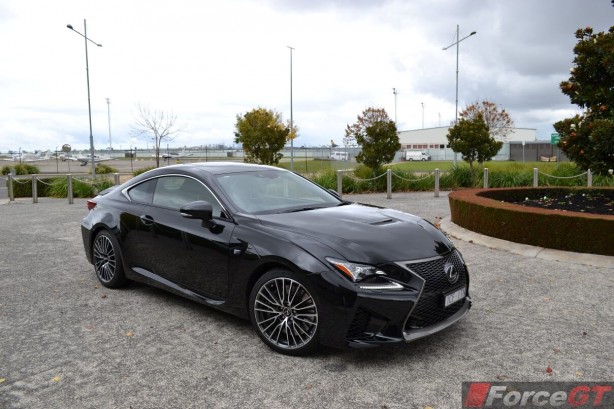 The realm of ultra-high performance coupes has been a heavily defended territory of the Germans, fortified with such nameplates as BMW M4, Mercedes-AMG C 63 and Audi RS 5.

Now, the German establishment is about to get a taste of ‘waku doki’ – Japanese for ‘heart pumping, adrenalin racing’.

That’s how Lexus describes its new halo model, the RC F. Built from the ground up as a 2-door sports coupe, the Lexus RC F costs $133,500 plus on roads and is the most exciting model to grace the L badge since the hyperactive LFA supercar.

For those unaware, F-designated Lexus models are high performance versions of the standard cars on which they are based. F is to Lexus what M is to BMW and AMG is to Mercedes. 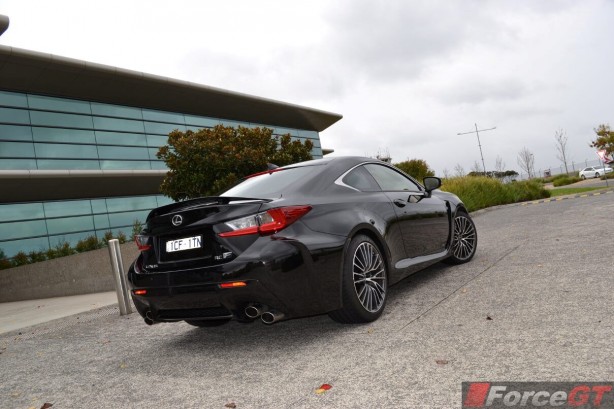 The RC F then, is the bad boy variant of the RC 350, a model which on its own, has managed to impress us in a recent test.

And when the once librarian of the car world drops its thick reading glasses for some party hats, it means just that.

Under the bulging bonnet lurks a 5.0-litre V8 which revs to 7,300rpm, sending 351kW of power and 530Nm of torque to the rear wheels via an eight-speed torque converter automatic transmission.

It will demolish the first 100km/h in 4.5 seconds, before hurling towards an electronically-limited top speed of 270km/h. 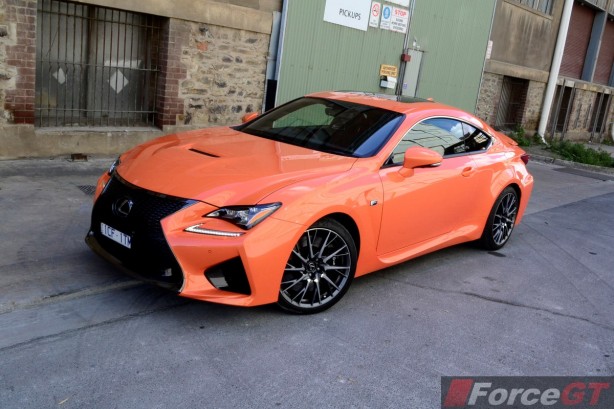 The exploding performance is conveyed to the outside world through an exterior that will make every head turn and every pair of eyes gawk in awe, especially when it’s draped in that striking orange paintwork Lexus calls Lava Mica.

A beefed up front bumper punctured with deep air intakes (that are functional), swelling bonnet penetrated with ventilation duct to expel heat from the V8, carving air breathers behind the front fenders, rear bumper complete with diffuser and integrated quad exhaust pipes, the RC F looks like it’s ready to pounce at whatever’s coming its way.

And did we mention that massive ‘in your face’ spindle grille up the front?

These exuberant details aside, the Lexus still has class. There is no shortage of curves, creases and lines, harmoniously fused with a whiff of LFA in its execution and vibe.

And the fact that it doesn’t look German may be enough as a drawcard for some, and is an attribute that we think should be celebrated in this segment.

The interior might look like a carry-over from the IS sedan, in fact, it is, albeit with a nice pair of sports bucket seats and more cowhide and Alcantara covering the dash top, door trims and kneepads.

However, the similarities stop as soon as you push the engine start button. The LCD instrumentation lights up like Tokyo’s Shibuya district at night, as a graphical RC F emerges to greet you, before morphing into a bank of digitised gauges, graphs and metres. 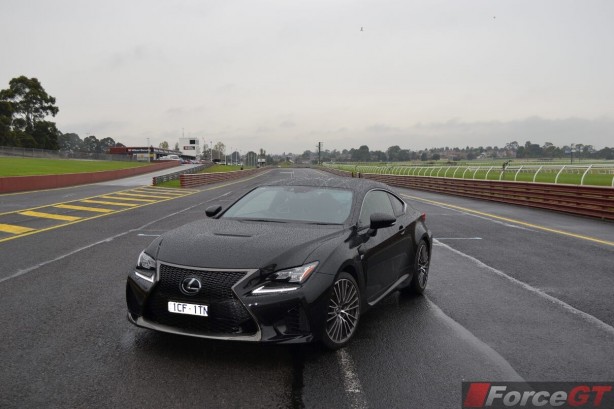 We love sitting in the RC F and even more, we love the whole techno-Japanese feel of the cabin that makes those of its German rivals look dated.

Built to the typical high standard of Lexus, the luxurious cabin sits four, if the two behind don’t mind being in a bit of a squeeze and getting all jealous of the front occupants’ superbly comfortable buckets.

A few gremlins start to emerge briefly after you settle-in in the RC F. The seating position isn’t low enough for a sports car. Lexus’ new generation remote touch interface is still too finicky to use and the infotainment screen is in desperate need for an overhaul.

Luckily, there’s one way to quickly put all these flaws behind your head – fire up the muscly V8 and indulge in that glorious roar on start-up.

The 5.0 V8 comes from the IS F, but everything except for the engine block has been almost entirely revised. There are new injector system, lighter moving parts, new camshaft profiles, titanium valves and redesigned intake and exhaust manifold.

With compression ratio raised to 12.3:1 and maximum revs increased by 500rpm, the RC F produces 13 percent more power than the IS F.

Fuel economy – rated at 10.9L/100km in the combined cycle – is improved with the engine using Atkinson cycle at low revs to conserve fuel and switching to Otto cycle when more power is required. But the figure trails many of its key rivals and there is no cylinder deactivation or idle stop/start. 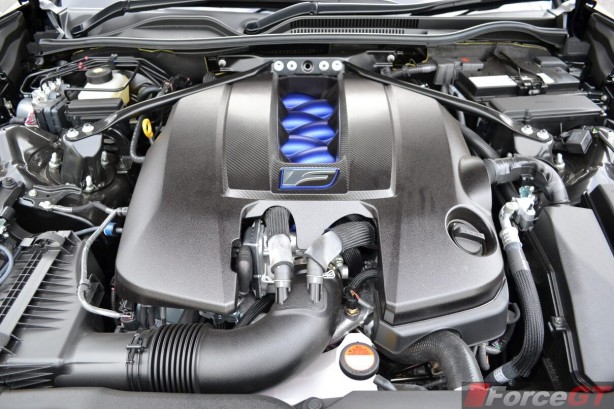 How does it drive? Well, if you are simply cruising around, it drives just like what you’d expect from a Lexus – serene, refined and very civilised. But wake the V8 from its slumber and it screams like a chimp on fire. At last, we found justification in Lexus’ decision to stick with naturally aspirated over turbocharging induction.

The ability to switch between two personalities depending on throttle input means the RC F can be as relaxing to drive as any luxurious cruiser or go absolutely nuts when poked.

Across all but the harshest bitumen, the RC F’s ride is remarkably smooth, while leaving just enough road feel through the steering and seat for you to know what’s going on underneath.

As with most modern cars, the RC F has selectable driving modes. Eco is simply too lazy and lethargic, with negligible fuel-saving benefits. Normal is best for daily driving. The Sport S and Sport S+ modes are what the RC F is all about.

In the last two settings, the RC F is transformed. The digital instrument changes its colour to a sea of yellow and red hues, the steering and throttle response is sharpened, the electronic watchdogs are loosen (Sport S+) and you get the full whack of the intake and exhaust noise.

The car is now straining on its leash, ready for full assault as soon as you step on the throttle. 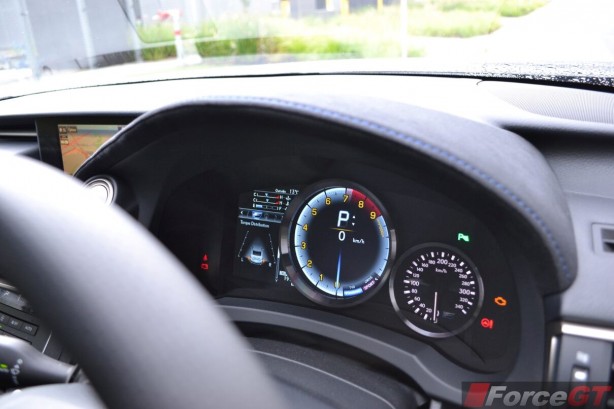 This is a proper track car, in a rather different way to cars like the BMW M4, Lotus Exidge or a stripped down racer. First, there is the noise that this thing makes as you take it up to its red line. The visceral roar of the V8 is immensely addictive and makes it feel faster than it actually is.

Then, there is the handling. Despite tipping the scale at a hefty 1,860kg, the RC F still feels properly planted. It’s surprising how expressive the Lexus is on the track. It moves around and you can feel its weight transfer and where the grip is.

The chassis, a heavily reinforced amalgamation of the Lexus GS front-end, previous-gen IS convertible middle section and the rear floor of the current IS, feels very well sorted. You can make tiny little steering adjustment mid corner and the RC F will pick it up and point its gaping nose where you want it to be. It helps in a big way keeping you on your intended line of travel.

The RC F doesn’t just want to push and understeer, it respects the driver’s input. You can choose to grip drive it for sheer pace, or loosen its rear end for some sideway lunacy. Either way, the RC F will put a big smile on your face.

The trick Lexus is using to manage that lumbering mass is Torque Vectoring Differential (TVD). Two electric motors, one on each side of the rear axle, ensure the appropriate amount of torque is distributed to each rear wheel. Unlike conventional mechanical system, TVD can react in milliseconds, regardless of how large or small the engine torque is. It even works during deceleration to improve turn-in to corners. 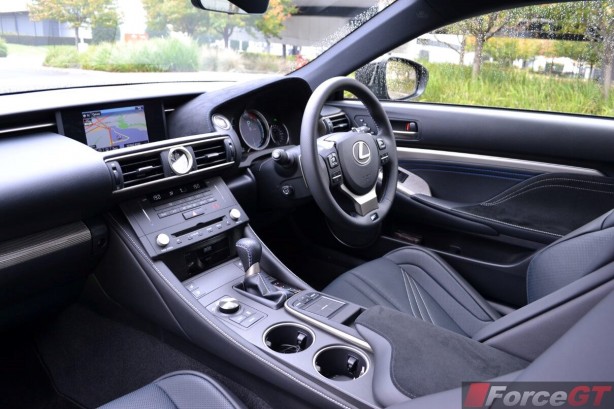 The rest of the package is just as promising. The electric steering has a decent analogue feel to it and the Brembo stoppers are strong and progressive with good feedback through the pedal.

The eight-speed gearbox is quick in conducting shifts and downshift rev matching is skilfully carried out with an equally satisfying snarl from the V8, though it’s still not as snappy as a twin-clutch.

Out on twisty back roads the RC F’s respectable dynamics are still all there for you to explore, only feeling a little restricted.

As most of the power is produced at the top end, it’s hard to wring out its performance on the street. The lack of low down torque means it doesn’t quite have the exploding surge of power like what you get from an M or AMG turbocharged engine. But as a sporty cruiser, the RC F is fantastic. 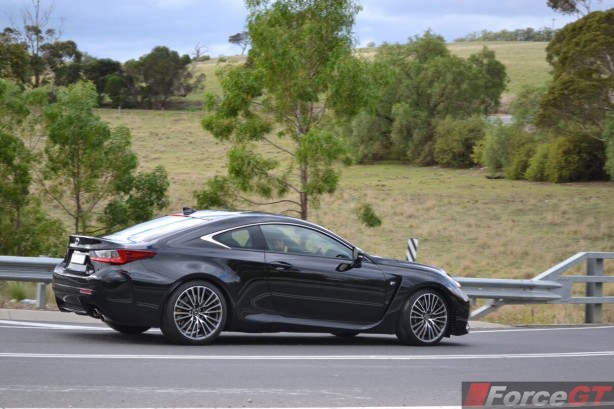 In a segment played by highly capable machines, the Lexus RC F has managed to carve its own little space. While it might not have the pinpoint accuracy of the BMW M4, it’s easier to drive fast and makes for a better grand tourer.

Essentially, the RC F isn’t about lap times and quarter-mile launches, but more for the thrill of driving. And for $133k, the RC F might just be able to sway some hearts from the German camp.