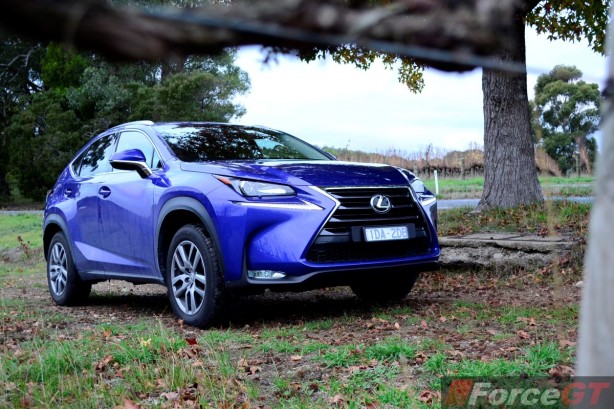 Luxury compact SUVs. They are as ubiquitous as sliced bread and potato chips. Hauling the family in style has never been more affordable these days – queue the latest entrant, the Lexus NX 200t.

Powered by a conventional petrol engine, the NX 200t heralds a new era for the Japanese premium brand that until now, has resisted the forced induction path for its petrol powerplants. It joins the eco-friendly hybrid NX 300h launched late last year.

While we liked its hybrid efficiency and whisper quiet engine, the NX 300h (tested earlier this year) just lacked the engagement and sportiness that a proper internal combustion engine can provide, especially in F Sport guise. 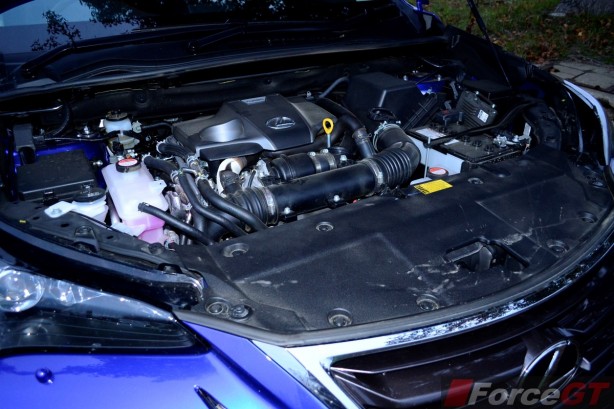 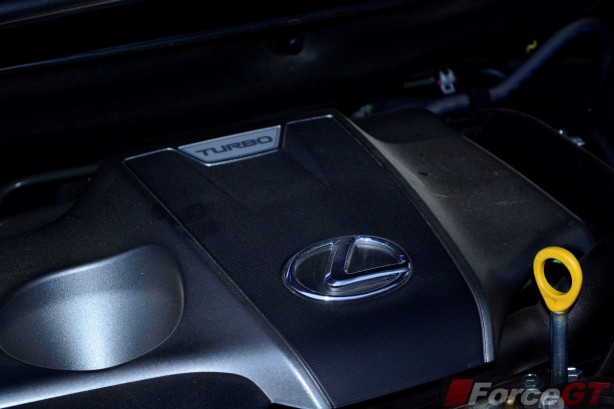 The all-new 2.0-litre direct-injected turbocharged four-cylinder petrol engine delivers 175kW of power from 4,800-5,600rpm and 350Nm of torque from 1,650-4,000rpm. Like its hybrid counterpart, the engine can operate on the fuel-saving Atkinson cycle besides the conventional Otto cycle.

The late intake valve closing of the Atkinson cycle reduces pumping losses and, as such, boosts fuel economy.

According to Lexus, the new 8AR-FTS engine has been crammed with so much new technology that it is the subject of a conference paper to the Society of Automotive Engineers of Japan (JSAE).

Special attention has been paid to minimizing turbo ‘lag’, including the use of a twin-scroll turbocharger and mounting the intercooler to the engine in order to minimise the intake volume downstream of the turbocharged to optimise response.

The new mill, which is destined for the Lexus IS and possibly the GS, also features the first use of Lexus Stop & Start technology, the latest fuel injection system and an air-to-liquid intercooler. 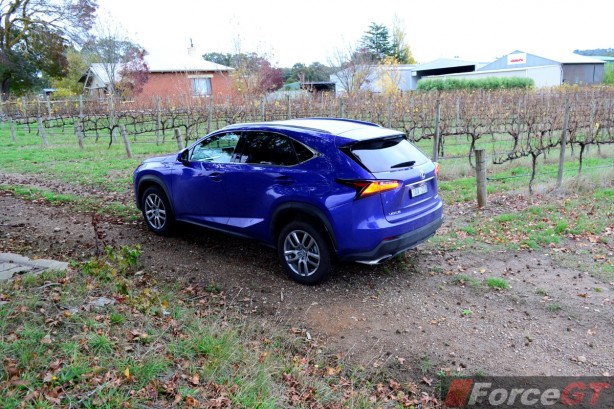 Unlike the NX 300h which is mated with a Continuously Variable Transmission (CVT), the 200t gets a new six-speed automatic gearbox driving either the front, or all four wheels via an electronically controlled all-wheel drive system, as per our test cars.

The system includes a Lexus-first pre-loaded front differential – a compact, lightweight, ultra-low-noise electrically driven oil pump that supplies pressure to the start-off clutch, so that the transmission is ready to spring into operation even before the engine starts.

On the road, the turbocharged four is a much better match with the NX’s chassis, with minimal turbo lag to content with. It is a lively unit but certainly not in the go-fast category. Its lovely spread of torque from 1,650 to 4,000rpm makes for a relaxing drive around town. 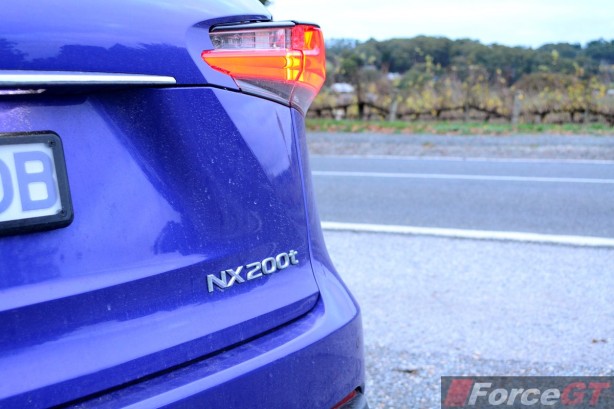 Like most Lexus engines, the new mill is well mannered and rarely intrudes into the cabin, thanks to twin balance shafts with resin gears that minimise engine vibration.

The Stop & Start system is also one of the smoothest we have come across, firing up with the delicacy of a samurai sword slicing through air.

Sadly, the same can’t be said about the 200t’s six-speed auto. While it is responsive and dishes up ratios with typical Japanese efficiency, it isn’t as smooth as other 6-speed autos we have tested. 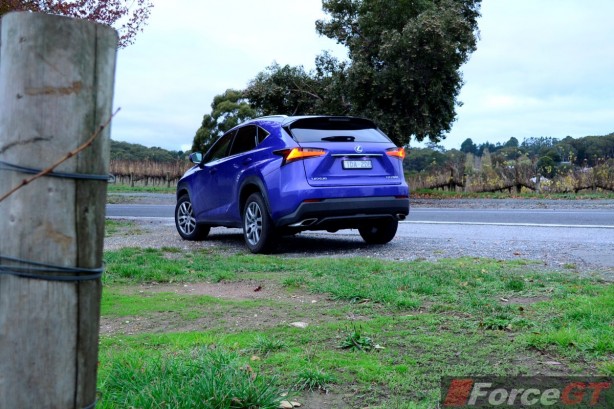 F Sport customers expecting a sporty engine note will also be disappointed. In normal driving, the engine is no more inspiring than that of a typical four-cylinder, lacking the bassy note that rivals such as BMW has engineered expertly into their engines.

Similar to most “light duty” all-wheel drives, the NX is driven by its front wheels in most situations, with up to 50% of torque transferred to the rear when required.

Around the corners, grip is relatively good and body roll is well contained, especially in the F Sport with adaptive sport suspension. In comparison, there is noticeably more roll in the entry-level Luxury with standard, non-adaptive suspension. 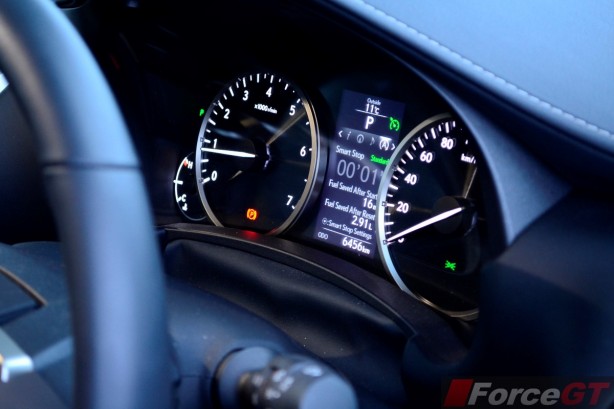 Like its hybrid sibling, the 200t’s steering remains dull and lacks the responsiveness expected at its price range. 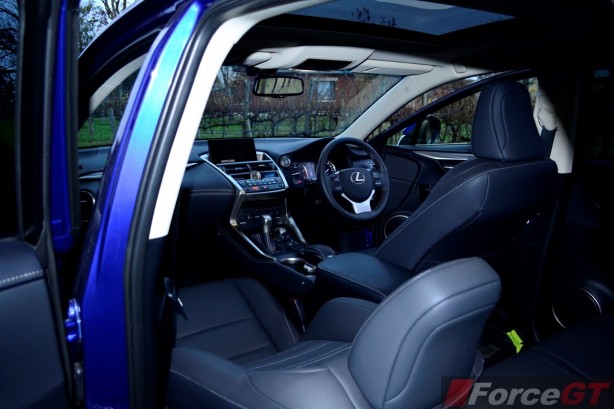 However, most buyers would likely accept the slight fuel economy trade off for one of the most stylish and well-equipped premium SUVs on the market. It comes with the same bold ‘spindle grille’ that is proliferating across the Lexus range.

Inside, there’s the typical high quality Lexus craftsmanship, clear instruments and comfortable seating for five, although a lack of lumber support on the base model is frankly, unacceptable at its price range.

The new turbocharged four-cylinder petrol engine is certainly a welcome addition to the NX range and the Lexus stable. The engine’s performance is good without being outstanding. More work is also required in tuning the engine’s disappointing note.

The new six-speed automatic isn’t as smooth or responsive as BMW’s 8-speed unit, but is far more effective than the CVT in the hybrid.

At up to $2,500 cheaper than the NX 300h hybrid, our money goes to the conventional NX 200t for a sportier and more engaging drive.