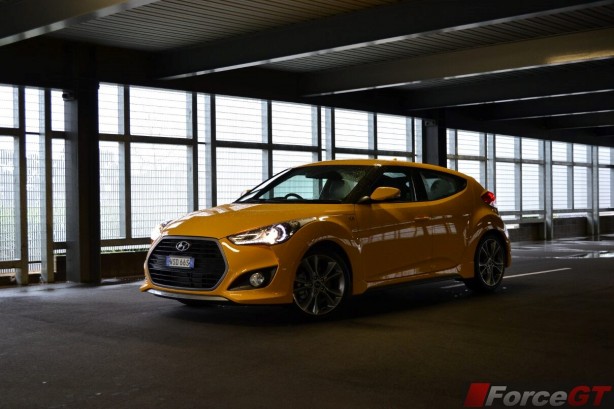 Hyundai’s unique three-door Veloster coupe-hatch has been given some further fine tuning inside and out as it takes a second shot at the sub-40k sports car segment.

With the goal post in the segment moving faster than politicians can come out with their excuses, the Veloster’s quirky design alone is no longer enough to keep up with the pace.

Not surprising when you are talking about rivals like the Toyota 86, Honda CR-Z, Subaru WRX and Ford Focus ST, all excellent cars in their own rights.

Better still (or worse in Hyundai’s perspective), it’s going to be another dog fight when the new Mazda3 MPS hits the market next year. 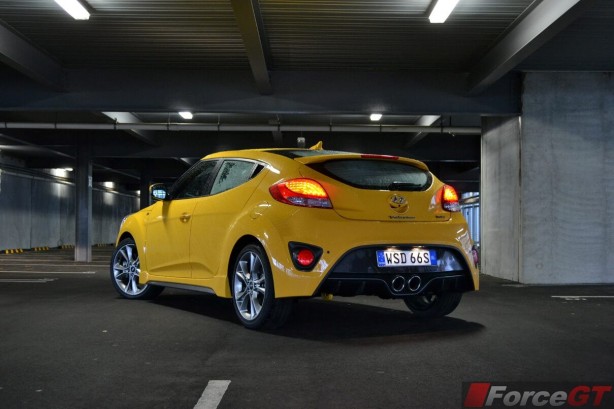 So, what’s new in the Veloster Series II? The biggest news is perhaps the new entry level $29,990 Veloster SR Turbo, available in both 6-speed manual or a new $2,500 optional 7-speed dual-clutch auto, which we have on test here.

Packing the same 150kW / 265Nm turbocharged 1.6-litre four cylinder petrol engine as the range-topping $33,990 Veloster Turbo SR +, the base Veloster Turbo SR loses a few luxuries like sunroof and satellite navigation to lob a couple of grand off its sticker.

The re-jiggling of its bang-for-your-buck equation is accompanied by a subtle facelift, which includes grey grille surround and new-style 18-inch alloy wheels. Yup, minor enough to not upset Series I owners. But there’s no need to mess with the Veloster’s exuberant looks, which, after three years on the market, is still as eye-catching as ever, especially in Bright Yellow paintwork, or the optional matte grey hue of our twin-clutch Veloster. 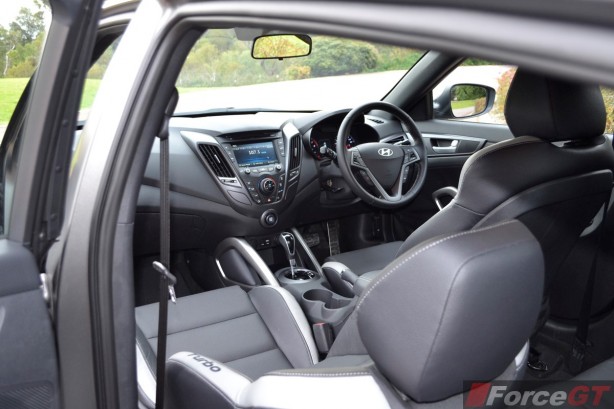 Updates to the Veloster’s equally youthful interior include coloured seatbelts and colour-stitched steering wheels. There’s also a new much classier-looking instrument cluster and revamped infotainment screen with much better usability and at last, 21st century graphics.

The rest of the design is what’s already familiar. This means superbly supportive front pews and comfortable rear bench, with respectable leg and headroom for all occupants. The extra rear door on the passenger side, which is cleverly concealed with a pillar mounted door handle, is surprisingly useful, allowing easy access to the rear seats. 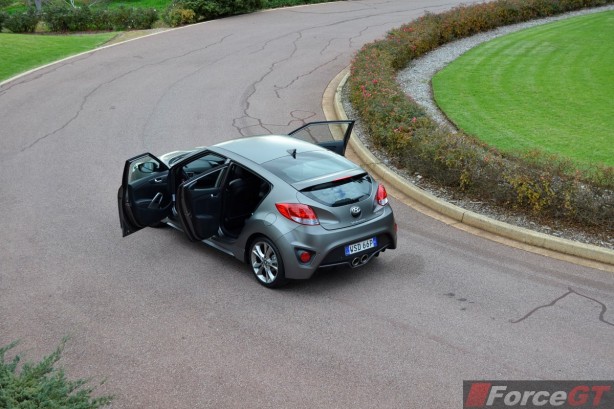 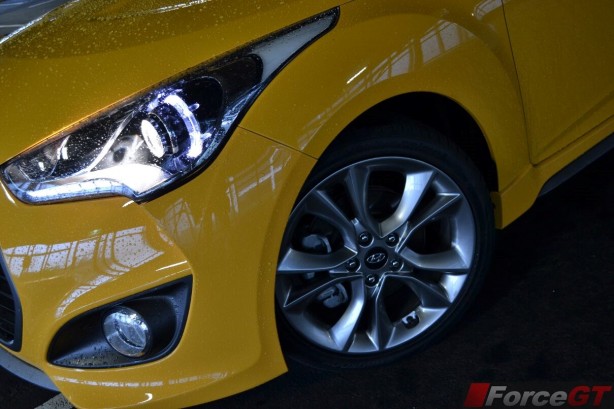 Improving on what’s already a sharp handler means the new Veloster Turbo now corners with even more aggression. Point the gaping front grille at a bend and the Veloster will garner all grip available from the tyres to ensure the intended line is followed.

Tweaks to the chassis have also got the rear end more involving during hard cornering, as the rear feels a little more playful than before when provoked.

This new level of throttle adjustability is much welcomed, but the same can’t be said for the throttle response. It’s far too sensitive right from the top of the pedal, making first gear take off in the six-speed manual model a challenging affair. This is made worse by the high pick up point of the clutch pedal.

For those not keen on working a stick, a seven-speed dual-clutch automatic transmission is also available, offering smooth and rapid gear changes, in addition to improved fuel economy over the old six-speed automatic.

Hyundai’s first dual-clutch is not without foibles though. While it works well pottering around town, demand sportier driving from it and its flaws start to emerge. It hangs on to 3rd gear for far too long, as though you have forgotten to upshift. It is also hesitant to kick down in corners, even in manual mode.

Unlike the European dual-clutch gearboxes, there’s no pops from the exhaust during upshifts either. 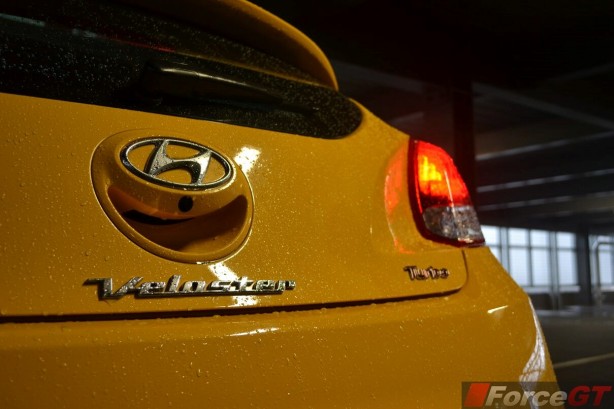 The Veloster’s new quicker processing for the steering wheel has improved its response, though it still feels a bit lifeless. Turbo + model now adopts Hyundai’s driver-adjustable three-mode Flex Steer system, which we find is more gimmicky than useful. Most owners will probably leave it in Normal mode once the novelty has worn off as Comfort is too light and Sport is just artificially heavy.

But the weakest link in the whole package is perhaps the engine, carried over unchanged from the pre-facelift model. Sure it’s refined and modern this 1.6-litre twin-scroll turbocharged direct-injected four-pot but where’s the crackles? The engine doesn’t swing into a deep burble on start up as you would expect from a sports car, and the aural sensation doesn’t get better even on full throttle.

It isn’t particularly quick, too. With an 8.4 second 0-100km/h time (manual transmission) the Veloster Turbo can only hang around in the warm-hatch club, which is a pity as its handling is definitely hot-hatch stuff.

All up, the Hyundai Veloster Turbo Series II is an improvement over the pre-update model, stepping up in packaging, handling, features and price.

But the Veloster is still more about style than anything. It’s more of a visual treat for bystanders than a car that really engages the driver in all aspect of driving.

And that means it will continue to appeal to the majority of people out there.