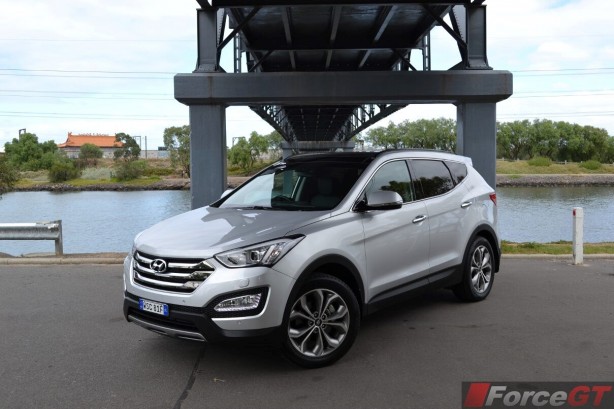 Hyundai’s third-generation seven-seater Santa Fe has been one of our favourite SUVs in its segment, winning our hearts with its handsome looks, excellent build quality, versatility and great value.

2015 brings a new mid-life facelift to the Santa Fe, with upgrades to exterior, handling as well as the addition of new features and technologies. The range spans from the entry-level $38,490 Santa Fe Active Manual to the high-specced $53,240 Santa Fe Highlander Diesel (tested).

Undeniably one of the best looking SUVs in the segment, the Santa Fe needs just a mild touch up to keep up with the times. A darker chrome grille, new Daytime Running Lights and cornering lights freshen up the exterior, complemented by new style alloy wheels across the three-level Santa Fe range. 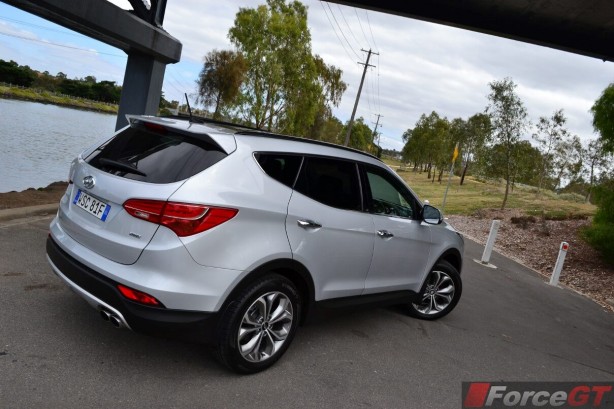 The interior is unchanged for 2015, this means you get a vast, well-built, functional and elegant cabin, with room for five adults over the first and second row seats, and two children in the third. Useful storage spaces are aplenty around the cabin including a sizeable cargo area with under-floor storage.

Like before, all models come standard with Downhill Brake Control and Hill-start Assist Control (prevents the car from rolling back on a hill start). 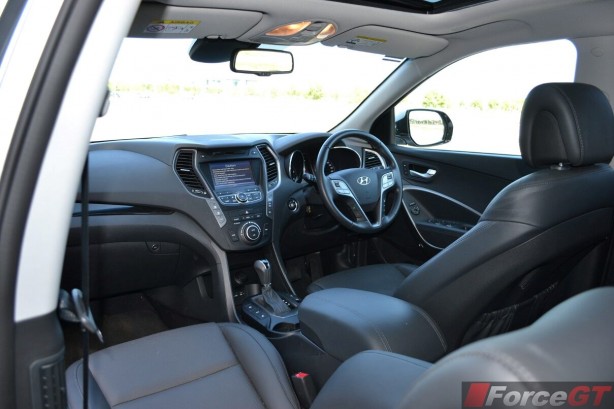 Adding value to the Santa Fe’s already sharp pricing, both mid-spec Elite and range-flagship Highlander now come standard with Hyundai’s Smart Tailgate, with hands-free operation. Rather than requiring a foot-sweep under the rear bumper, as used by other such systems in this class, the Santa Fe’s tailgate is operated by the sensor in the car’s proximity key. Stand near the back of the car for three seconds and the boot opens automatically.

While the system is useful when you have a handful of heavy cargo, standing near the tailgate for any other reason will also inadvertently trigger it to open. Sorry Hyundai, we prefer a foot-sweep under the rear bumper.

The top-spec 2015 Santa Fe Highlander gains a host of safety features as standard, including Lane Departure Warning (which we find is too sensitive at times) and – perhaps most convenient of all – Hyundai Smart Parking Assist (SPAS), which parks the vehicle automatically. The Santa Fe Highlander now also comes with Front Parking Sensors.

However, the range topper still misses out on automatic up/down power window for the front passenger, a feature standard on most of its key rivals.

Other annoyances include the lack of illumination for the auto hold and park brake buttons when activated – you will have to look out for the indication in the instrument cluster instead.

We also find the infotainment screen graphics look dated and the layout needs rework – time and cabin climate settings should be visible on the screen at all times. 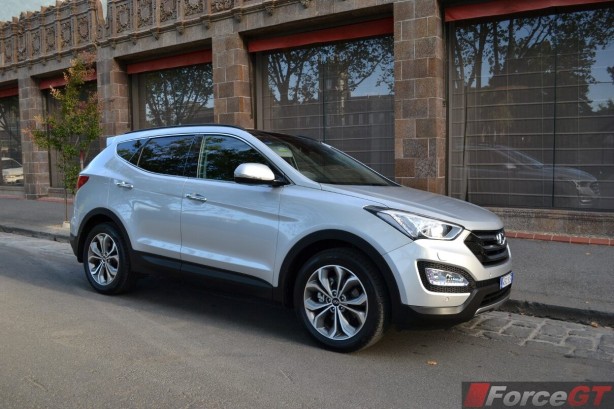 Both engines can be paired with either a six-speed manual transmission (Active variant only) or a six-speed automatic driving all four wheels through Hyundai’s Active On-Demand 4WD system.

The refined petrol engine lacks some eagerness but does the job just fine in hauling the big SUV around town. The diesel, however, is coarse and vocal in all proceedings except cruising, though it’s relatively economical and its 436Nm of torque is handy when it comes to towing.

A 3.5-litre V6 or turbo four-pot would make a perfect fit for the Santa Fe, but sadly, are not available. 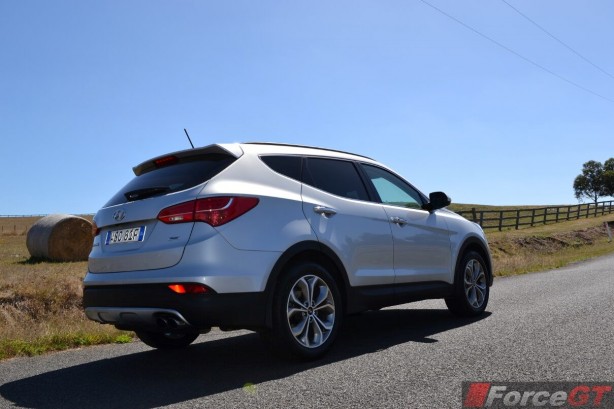 Building on the already admirable handling and ride of the pre-facelift model, the new Santa Fe benefits from further tweaks to its chassis, with Hyundai’s Australian Engineering team once again tasked to fine-tune the Sante Fe even further for local conditions.

Indeed, the large SUV exhibits fine dynamics, with a well-judged ride quality that is comfortable across most Australian roads without being overly cushy.

Its off-road ability is remarkable, too. Put it into 4WD lock mode, the Santa Fe will happily plough through most rough terrain with ease. The differential’s effectiveness in managing slip adds to the car’s ability to maintain good traction over slippery surfaces. The Down Hill Brake Control (DBC) also works a treat by doing the braking for you when descending a slope, all you have to do is steer.

Speaking of steering, the Santa Fe’s tiller is still a weak link in the otherwise accomplished driving package. Despite the switch to quicker 32-bit computer processing – rather than the predecessor model’s 16-bit system – which Hyundai claims allow for greater weight and feel differences between the three steering mode, the steering still lacks feedback and connectivity.

On the flip side, the brakes offer plenty of bite with strong resistance to fading, impressive for a 2-tonne SUV.

The refreshed 2015 Hyundai Santa Fe still gets a big tick from us in terms of design, build quality and practicality. Its appeal now further lifted with added standard features and improved dynamics.

All it needs is a new range of more polished drivetrains to keep its place at the front of the pack.