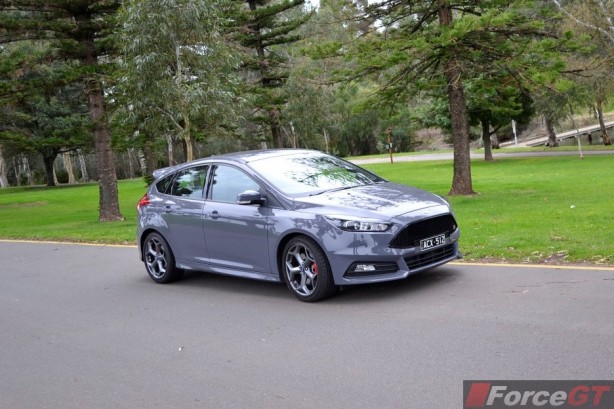 When it comes to hot hatches, the Ford Focus ST is often overlooked for the more all rounded Volkswagen Golf GTI.

Don’t get me wrong. The fast Golf is a brilliant car, especially in its latest Mk7 iteration. It’s fun, but also amazingly comfortable and practical, which makes it an ideal family car for petrol head dads with a wife and two kids.

Its trump card though, is the availability of an automatic gearbox, which makes convincing the “finance minister” of the household a much simpler affair.

However, what makes the Golf GTI such a wonderfully all rounded car is also what makes it…. a bit dull. In order to be jack-of-all-trades, it’s master of none. Its brilliance is all a little… detached and civilised. 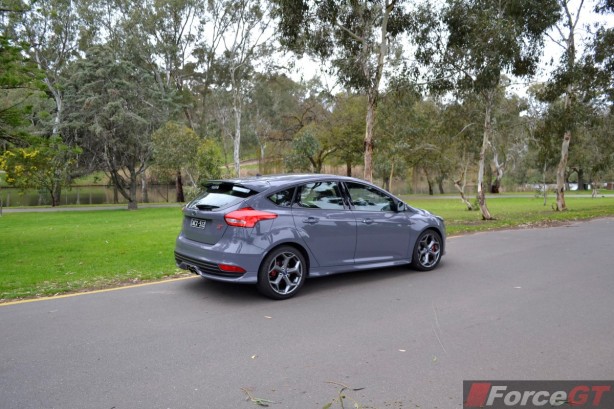 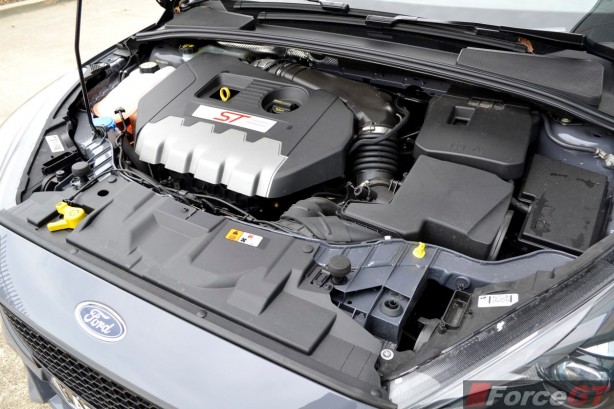 It beings the moment you hit the start button on the dash, firing up the 2.0-litre turbocharged four-cylinder EcoBoost engine that idles with a nice burble, warning you this is no ordinary hatch. Sure, it’s now one cylinder short of the old ST but it delivers more power and torque – churning out 184kW at 5,500rpm and 340Nm at 2,000 to 4,500rpm with hardly any lag. It will generate an extra 20Nm momentarily on overboost, too.

It hasn’t lost that deep, guttural exhaust note of the old Volvo-sourced five-cylinder mill, either. Whether you are sitting in or outside the car, it tells you you’re in something special. And in this regards, it trumps the Mk7 Golf GTI, which sounds rather ordinary (at least inside the car) until the soundaktor kicks in at higher rpms.

Bury your right foot and there’s minor tugging at the wheel as all 360Nm are suddenly unleashed to the front wheels (this is despite torque vectoring). It isn’t unruly though, as the electronics speedily sort things out. 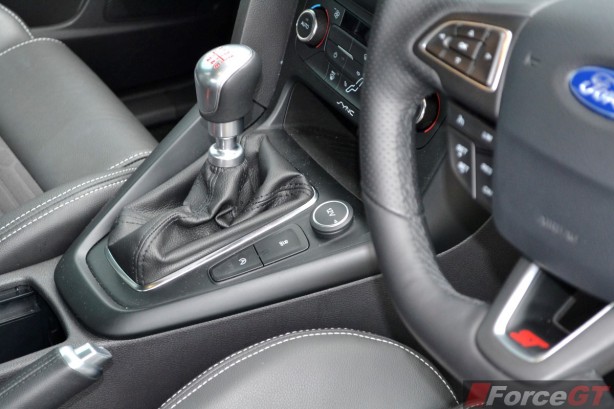 Served up via a short throw stubby gear lever, the Focus ST requires just 6.4 seconds to hurl itself to 100km/h from a standstill in our “non-professional” hands.

Ford says the company has made improving the entire driving experience the number one objective when refreshing the Focus ST for 2015.

The sports suspension now features all-new front springs and sportier new shock absorber tuning front and rear, with stiffer suspension bushes on the front lower control arm and rear spring links. While the anti-roll bars and rear springs have been carried over from the pre-facelift model, its dynamics are impressive. 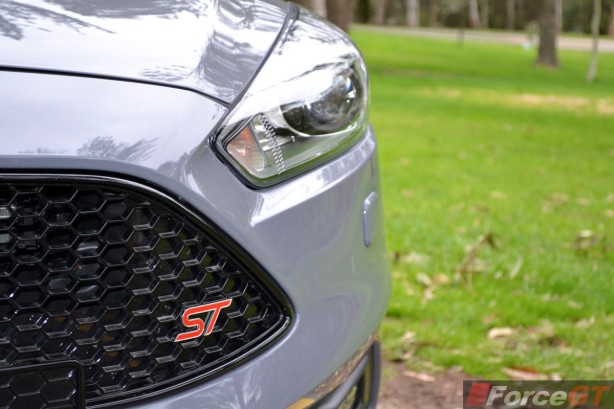 Its chassis balance is sublime, with an on-road feel that is confidence inspiring and one of the best in class.  The ST’s beautifully tuned suspension (non-adaptive, I may add) soaks up road imperfection with surprising ease, yet strings corners together with the alacrity of a terrier sniffing out a wayward bunny.

Like most front drivers, lifting the throttle briefly on corner entry will further aid turn-in. But once into the corner, you can get back on the gas much earlier than most front drivers without the risk of running into the nearby scenery.

The 2015 Focus ST also benefits from the recalibrated electronic power steering. It is well weighted and accurate with relatively good feedback. 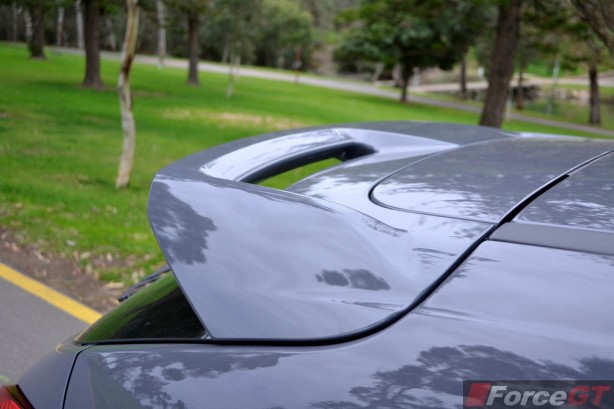 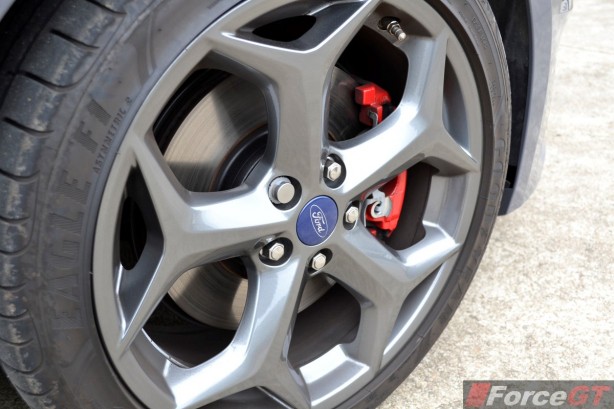 Unlike some of the ST’s rivals where the brakes can be too bitey, the Ford’s brakes have a progressive feel to them and rein in the speed with ease.

Not only is the updated Focus more accomplished dynamically, it is also better looking, thanks to the revised front fascia. It has a lower, wider stance courtesy of the new Mustang-inspired front grille, slimmer dark-tinted headlamps and new rectangular foglamps.

Its athletic styling is further reinforced with body-coloured side skirts and diffuser elements either side of the twin hexagonal centre exhausts and a rear roof spoiler optimized for aerodynamic performance.

Rounding off the exterior makeover is a set of 18-inch dark grey finished alloy wheels that look decidedly small, with Australia missing out on the 19-inch wheels of European models.

Our test car also comes with a distinctive new dark grey exterior colour called Stealth that is exclusive to the Focus ST.

Inside, the fuzzy old dashboard has been banished, replaced with a simpler and more intuitive layout with significantly fewer buttons and a large 8-inch colour touchscreen with SYNC2 voice control. Its soft touch materials and fit and finish are also a few steps above the old ST (although still not as plush as the recently released Peugeot 308 GT). 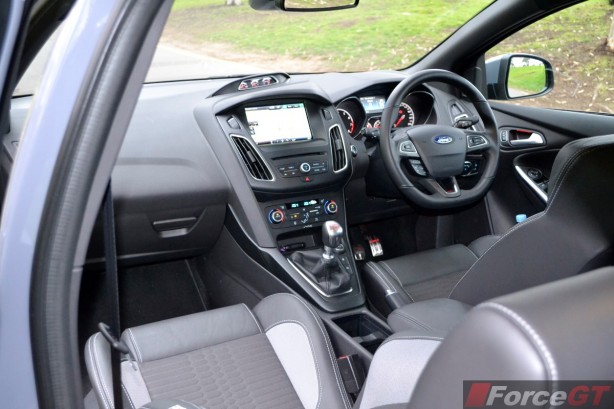 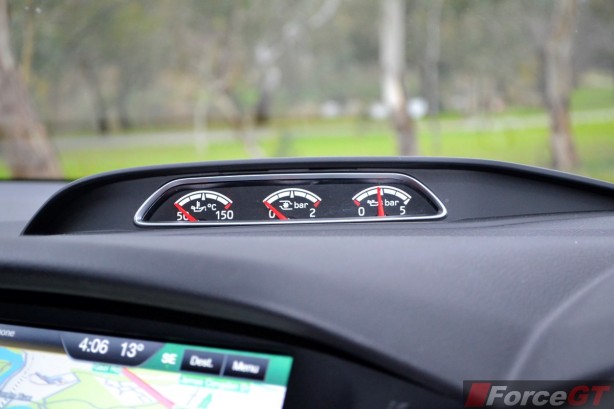 There’s an additional bank of three gauges situated on the top of the dash that display turbocharger boost pressure, oil temperature and oil pressure information.

While the driver is greeted by a new, flat-bottom steering wheel that is nice to hold, we find the closely spaced cruise control buttons hard to use without taking our eyes off the road.

But best of all, the driver and front seat passenger are hugged by a pair of splendid, deeply-bolstered Recaro seats wrapped in a combination of leather and textured fabric sides. You will need them when you throw the ST through a set of corners as they grip you like a terrified child hanging onto a parent’s leg!

Forget the Golf GTI. The 2015 Ford Focus ST is the new all-rounder!

It’s effortlessly fast, entertainingly playful and every bit as easy to live with day-to-day as a regular hatchback.

The German-built ST is also delightfully well put together, with zero creaks or rattles from within its cabin or chassis.

As an added bonus, it’s cheaper than the Golf GTI, too – even with the $2,000 Technology Pack (which is a must) – making it one hell of a bargain!