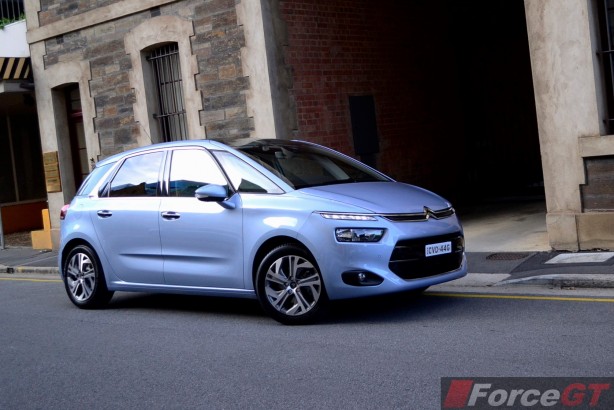 People mover is a category that usually gets overlooked for the more fashionable but functionally near identical SUVs. They don’t need to be boring, either. Take the new Citroen C4 Picasso, for example, it offers unique looks, a spacious interior and a decent drive.

Featuring Citroen’s signature dual-chevron grille flanked by LED-infused daytime running lamps at the front, a hidden C-pillar garnished with silver window trim pinched from Citroen’s upmarket DS models, and 3D-effect LED taillights; the C4 Picasso is one of the most stylish people mover on the market today. 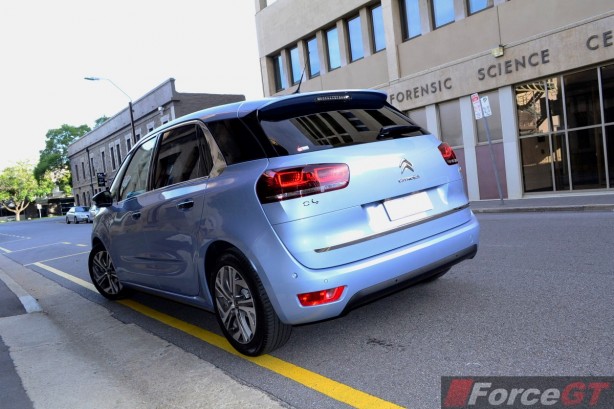 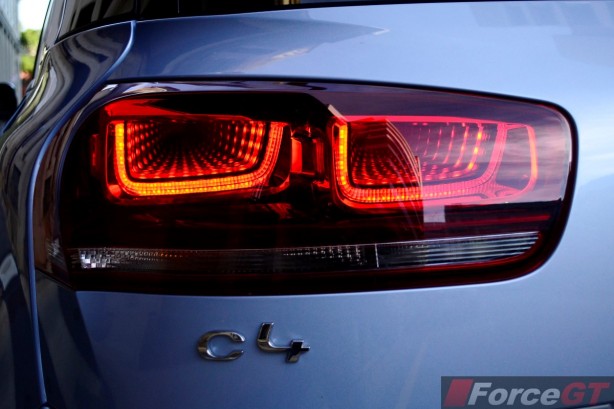 Citroen even says it’s more car like than a people mover, thanks to its lightweight EMP2 platform shared with the latest Peugeot 308 hatch.

Available in Australia with one specification encompassing a 1.6-litre four-cylinder turbocharged petrol paired with an all-new six-speed automatic transmission, the five seat C4 Picasso is priced from $40,990.

For that you get a fabulously expansive interior with excellent all-round visibility and a number of segment first features and technology, including a 360 degree bird’s eye view monitor and automatic park assist and does parallel as well as 90 degrees parks. 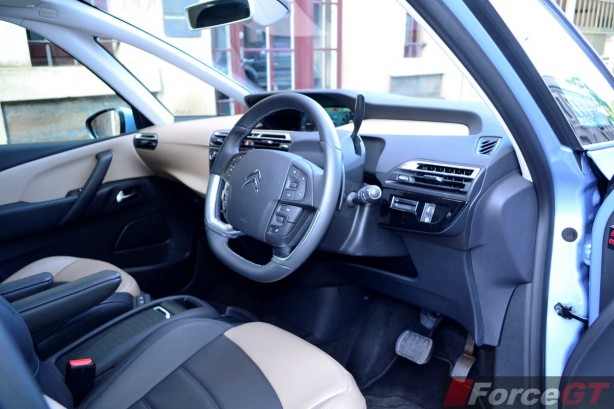 A people mover’s interior is arguably its greatest asset and the C4 Picasso doesn’t disappoint. The driver and front passenger travel in superb comfort, courtesy of a pair of lounge chair with massage function seemingly designed by a bunch of retired chiropractors.

The front-seat passenger even has an electrically extendable foot rest that makes Qantas business-class seats seemed second grade. Further aback, rear seat passengers are similarly well catered for, with three heavily bolstered individual seats (all supporting ISOfix), while outboard passengers even have airline style fold down trays in front of them. Besides the central air vents, rear occupants also get vertical vents on the B-pillars to take the bite out of scorching Aussie summers. 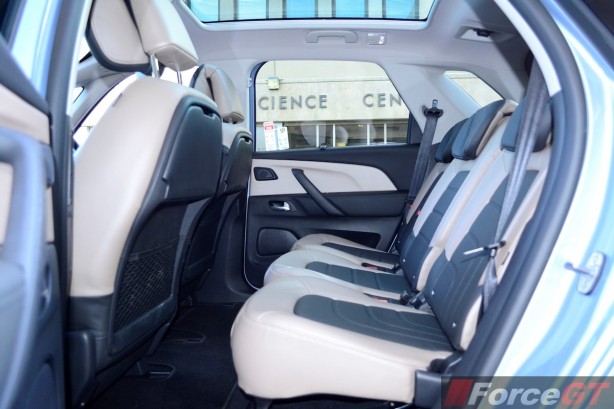 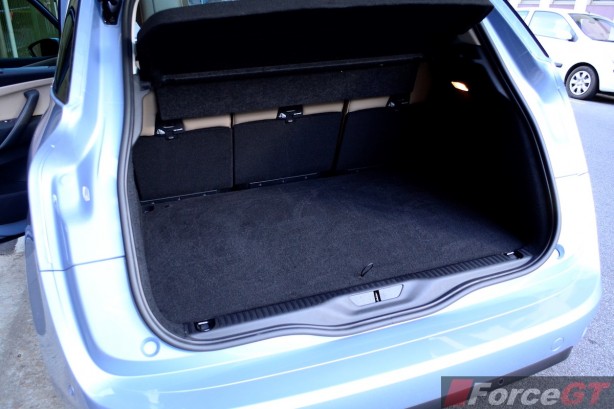 Like most in its class, the C4 Picasso is a five-seater (for active breeders, there’s the larger seven-seat C4 Grand Picasso for an extra $4,000) but a decent sized 537 litres boot that will swallow most of the family’s weekend away luggage. This can be expanded to a useful Ikea-friendly 1,851 litres with the rear seats folded.

Citroen says there are 16 stowage compartments throughout the cabin as well, with another 40 litres worth of storage space. Perfect as a modern day family car.

What impresses most is the Citroen’s built quality and fit and finish. Most of the cabin plastics have a lovely feel to them and while the centrally-mounted instruments might not be everyone’s cup of tea, its ginormous 12-inch high-definition LCD screen is crisp and doesn’t take much to get used to. A smaller touchscreen further down controls everything from the aircon to DAB+ radio.

The only criticism in the area is the flimsy column-mounted gear-stick lever that appears to be a remnant of a cycle’s broken spoke. To make matters worst, it’s mounted on the wrong side – right. So, every time when you reverse into your driveway, or a parking spot, you spend a few seconds grabbing at the invisible gear-level on the left, only to realise the damn thing is on the other side! 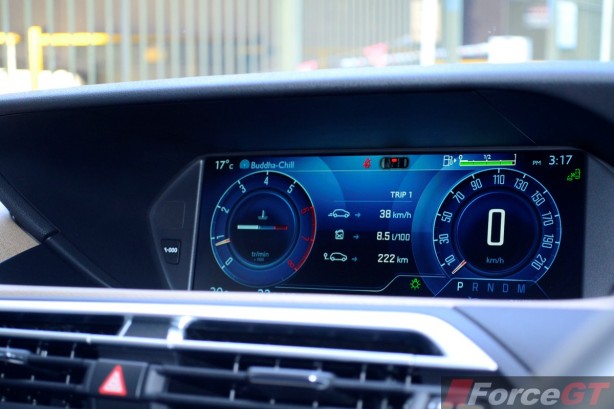 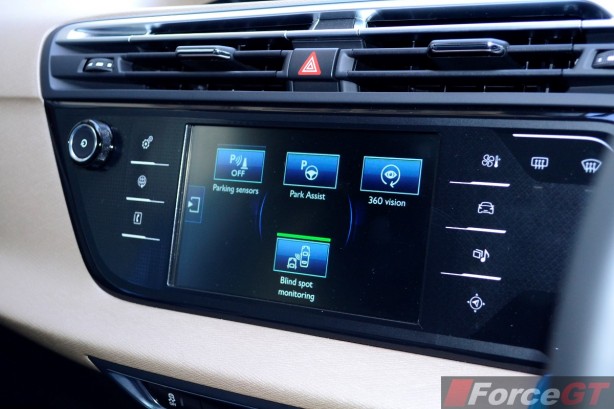 Other annoying little quirks include interior door levers that are mounted too low and the electronic handbrake that camouflages itself next to the door lock/unlock button on the dash.

Then again, you don’t buy a French voiture intuitive ergonomics, do you!

On the move, the C4 Picasso is refined and well mannered. The 1.6-litre turbocharge petrol four-cylinder, co-developed by Citroen-Peugeot and BMW, produces a respectable 121kW at 6,000rpm and 240Nm from 1,400 to 4,000rpm. It offers accessible power and performance around town and on open freeways, while returning a combined average of 8.3L/100km (tested), thanks to standard stop/start.

Despite Citroen’s claim that the C4 Picasso drives like a hatch, its tallboy design and longer wheelbase means it’s relatively top heavy around corners if pushed. There’s noticeable body lean and the steering lacks the crispness and quality feel of a decent hatchback. However, body control is good and there’s plenty of grip to feel confident.

Citroens have always tended to be comfortable and the C4 Picasso is no exception to the rule. Its engine is hush, while wind and road noise at any speed is wonderfully well contained. The suspension irons out road imperfections with marvelous efficiency,

I picked up the 2015 Citroen C4 Picasso not expecting to be impressed but was unexpectedly won over by its superb comfort, competent handling and exquisitely crafted interior.

It may not have the brand cache of a BMW 2 Series Active Tourer, but it is the more stylish one.

While the French hasn’t had a great track record in terms of reliability, the Citroen comes with an impressive 6 years manufacturer’s warranty and should be on every family’s shopping list.