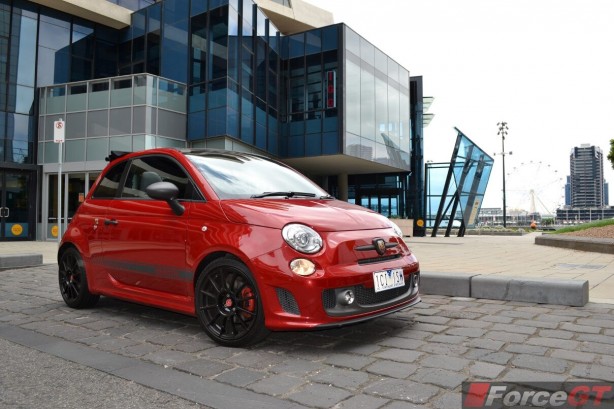 The new Abarth 595 range has received two new trim levels. The 595 Turismo and 595 Competizione hatch and convertible now join the 595 ’50th Anniversary’, launched in May last year as the fastest and most powerful 595 so far. While the Turismo version offers slightly more luxury, the Competizione steps up to a more race focussed specification.

Priced from $39,000, the 595 Competizione’s exterior is distinguished by the burnished finish on the front grille, door mirrors, door handles and rear number plate light housing. There are the usual Abarth sporty touches to set it apart from a standard Fiat 500, including a wider front and rear bumpers, beefier side skirts, bigger rear spoiler and Abarth decals and badging plastered around the hot hatch.

The car sits closer to the ground with Koni variable damping sports suspension connected to 17-inch wheels, while a Dual Mode ‘Record Monza’ exhaust system with quad tips further eliminates any doubt about its sporting intent. 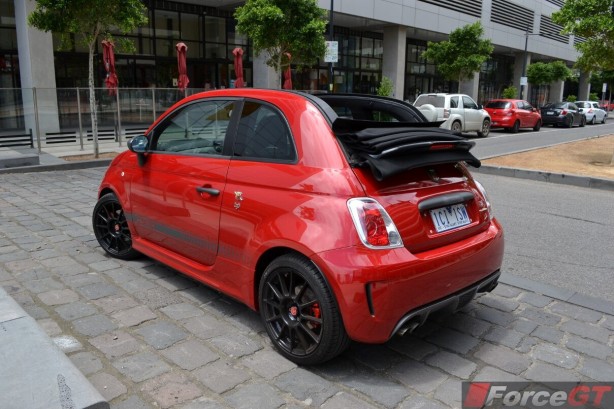 The 595 Competizione convertible we have on test here features a fabric roof that automatically folds back in stages. When half retracted, it becomes a full length sunroof. Opening it fully, the roof retracts the rear glass and spoiler completely, nestling just above the boot lid, blocking rear vision. 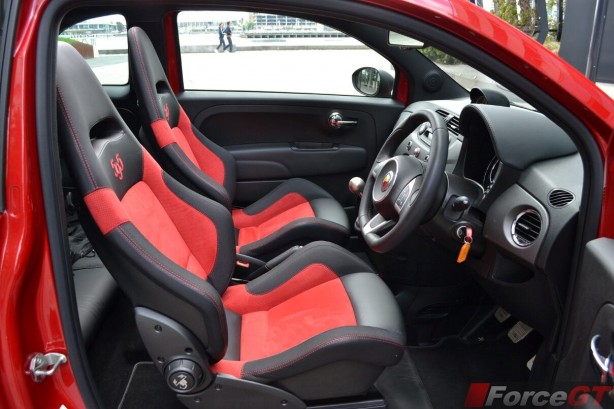 Roof up or roof down, the 595 Competizione convertible is a little head-turner. Perhaps that is something to justify its steep price tag, as one could arguably say that it’s the cheapest ticket to ‘look at me’ motoring, considering most convertibles with the ‘wow factor’ cost more than $60k.

Power comes from a 1.4-litre T-Jet turbocharged four-cylinder engine which generates 118kW and 230Nm, channeled to the front axle through a five-speed manual gearbox. A five-speed sequential mechanical transmission with steering wheel paddles is a $2,000 option but we recommend against it, as it is clunky to use and dulls the whole driving experience.

Abarth claims the dash from standstill to 100km/h can be accomplished in 7.4 seconds. Brisk, yes, but we are more used to seeing the time dipping below 7 seconds in hot hatches these days. That being said, it feels fast thanks to its lively engine, vocal exhaust rort and feather light 1,035 kg kerb weight (feels even faster with the roof down). 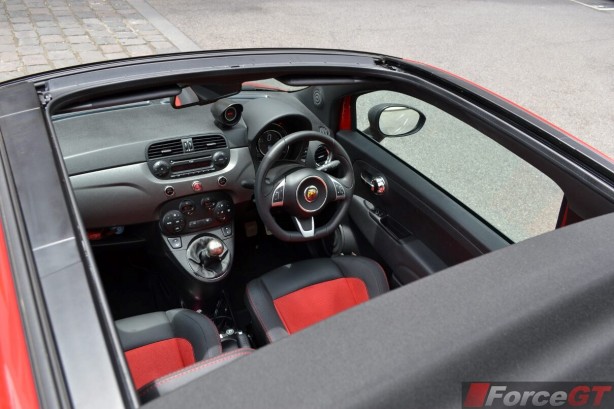 Despite being a convertible, we did not notice any compromise in chassis rigidity. Like its roofed sibling, the 595 Competizione convertible attacks corners with poise and precision. Tuck the steering wheel into a sharp hairpin and the 595 obeys, digging deep into its abundance reserve of lateral grip. Its tiny foot print makes it even more pokeable in a tight and twisty course, stringing corners like a go-cart.

Stopping power is provided by Brembo calipers acting on cross drilled brake rotors all round (the rears are probably one of the smallest and cutest cross drilled rotors I have ever seen), and they look the business. 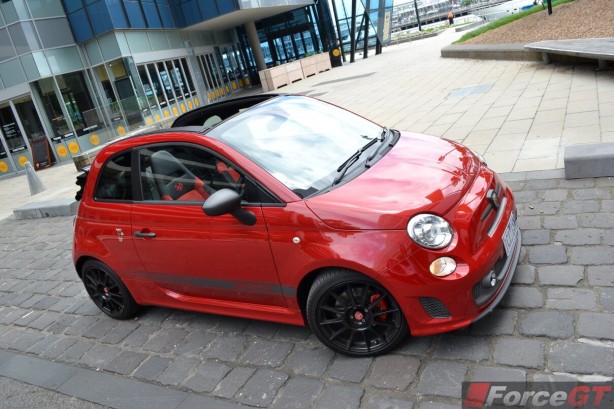 Fitted with a sports suspension, the Abarth’s ride is, without surprise, very firm. On good roads, it’s not so much of a problem, but on bad ones, it’s jiggly and quite trashy. At three digit speeds, wind and tyre noise is a constant companion in the cabin, but that’s to be expected from a convertible with a soft top.

In terms of practicality, the Abarth offers adequate headroom and legroom for the front row occupants. There is proper rear seating for two adults at the back, although rear legroom can be an issue for larger adults. Boot space is scarce at 182 litres, though it can be expanded to 520 litres with the rear seats folded.

Many would walk away from the Abarth 595 Competizione convertible thinking it’s irrelevant and expensive. Some would look back to have a second glance at its charming looks. Few would even take it for a second drive because it’s just hugely entertaining.

The Abarth 595 Competizione convertible is nowhere near the top end of its segment, yet it will still win people over.