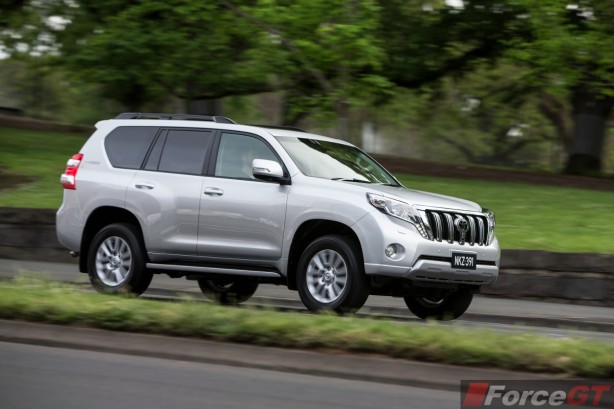 Toyota has given its iconic four-year old LandCruiser Prado a subtle mid-life facelift, with a nip-tuck that brings a nose job, extra equipment and a moderate price hike.

It has also taken the opportunity to scale back the number of variants to eleven, ditching the slow-selling three-door version.

However, Toyota has also worked on making the latest Prado more refined and comfortable inside.

With increased competition, especially from the increasing popular Jeep Grand Cherokee, can the LandCruiser Prado hold its ground? 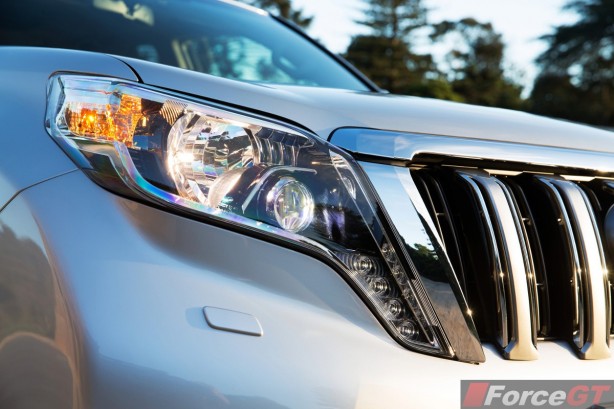 The new Prado’s frontal renovation starts with what Toyota describes as a “heritage-inspired” grille. It’s bold; with lots of chrome around the five slotted bars.

It is flanked by a pair of restyled headlamps featuring contrasting black and powder-coated aluminium internal finish and LED daytime running lights (standard on our range-topping Kakadu, along with the VX). Further down, there’s a deeper front bumper to round off the front fascia makeover.

Like any mid-life makeovers, there are the pre-requisite, freshly styled set of 18-inch alloy wheels to enhance the car’s profile, while at the other end, the tail-light clusters have been redesigned with clear lens blocks inset with red accents. The LandCruiser logo is integrated within the lamp casing as well. 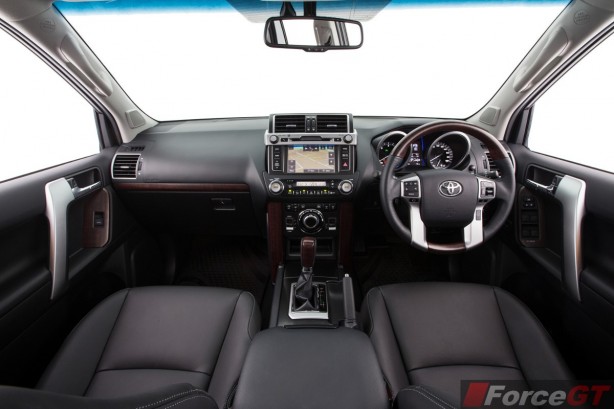 Climb inside and you are greeted by new switchgear and instruments, as well as new colour schemes and trimmings that lift the cabin ambience. There remains a plethora of soft-touch surfaces and the built quality is second to none.

A 7-inch colour screen finds pride of place on the centre console, while a revised instrument binnacle incorporates new-look speedometer and tachometer dials.

Under the rejuvenated skin, Toyota hasn’t messed with the car’s winning formula.

There is no change to the car’s 11.6 metres turning circle or approach (32o), departure (25o, 24o on the Kakadu) and ramp-over (22o) angles, safeguarding the Prado’s manoeuvrability and off-road prowess. 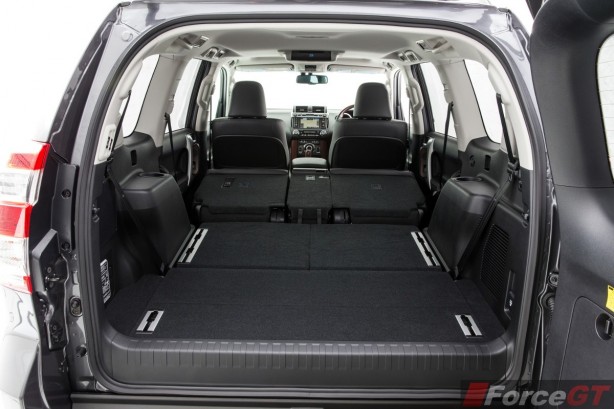 The front seats are generally supportive and comfortable, while the redesigned rear seat helps access to the third-row seat (standard on Kakadu and VX). When not in used, the third-row seats can be electrically folded away for more luggage space. Middle row passengers also enjoy vast amount of legroom space and it goes without saying that headroom is plentiful.

However, the hefty spare wheel remains mounted on the side-hinged tailgate, making opening a chore. 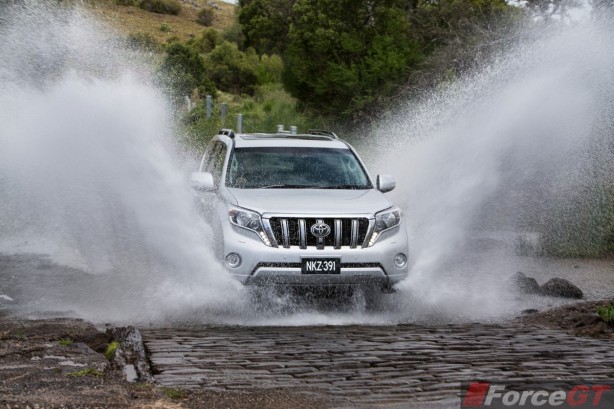 The new LandCruiser Prado carries over both its engines – a 127kW/410Nm 3.0-litre turbo-diesel matched to either a 6-speed manual or 5-speed automatic that is favoured by 95% of buyers, or the familiar 4.0-litre quad-cam V6 petrol that generates 202kW of power and 380Nm of torque, connected to a 5-speed auto with sequential shift function.

Both transmissions are married to a full-time four-wheel drive system with a lockable Torsen centre differential and two-speed transfer case.

While the Toyota’s 2,500kg towing capacity may seem competitive at first, it falls short of many ute-based 4WDs’ 3,000kg-plus towing capacity. It also tows 200kg less than Ford’s turbo-diesel Territory.

However, grey nomads will be pleased to know that the Prado is now equipped with a trailer sway control system that is designed to suppress trailer swaying when towing. 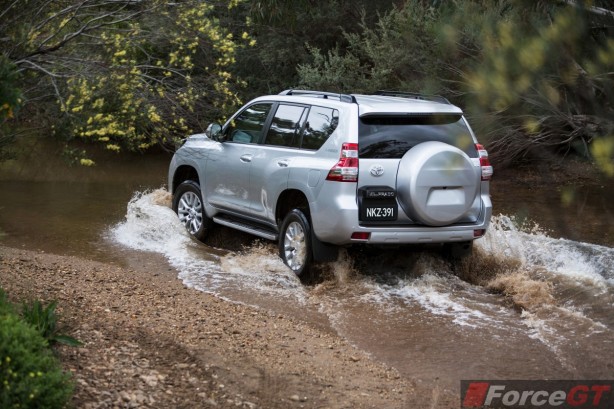 Like most of Toyota’s recent models, the LandCruiser Prado has received local ride and handling tuning for its suspension, stability and traction control systems and off-road controls.

The car underwent approximately 450,000km of local testing to ensure it meets the demands of Australians customers.

The range-topper also gets the added benefit of front and rear Adaptive Variable Suspension, and height-adjustable rear air suspension. 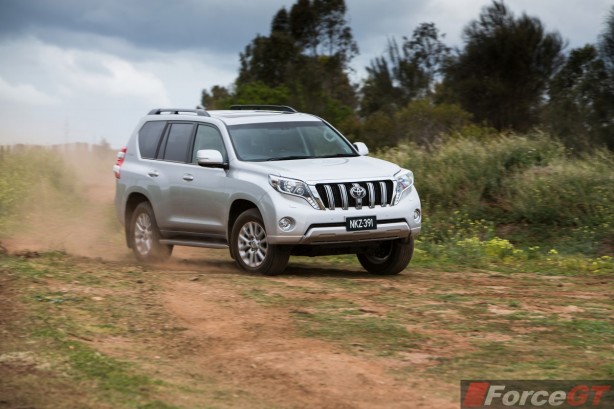 In Comfort mode, its extra suspension rebound actually makes for a less comfortable ride, even if occupants are more isolated from breaks in the road surface.

Flick the switch into Sport mode and there is a corresponding increase in stiffness, but that’s no passport to aggressive cornering, as body roll is still evident. The Prado’s steering remains vague, despite Toyota’s claim of ‘recalibration’ to increase build-up feeling off centre and improve connection to the road.

However, these are trade-offs that buyers have to take into consideration as the Prado’s off-road ability has been further refined and is now superb.

On top of that, a Multi-Terrain Monitor, with front and side-mounted wide-angle cameras, lets the driver pin points the car’s exact position and clearance, making off-road driving a breeze. 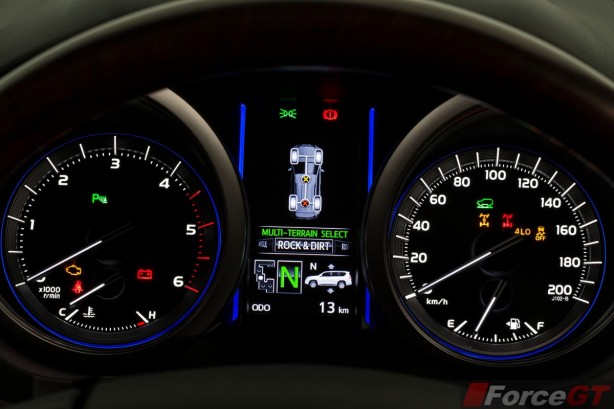 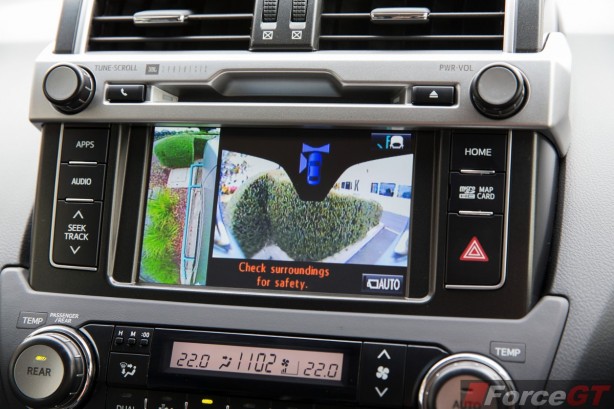 Yes, the competition has increased but the Toyota LandCruiser is still the pick if you are the active outdoor type, or need to tow a trailer occasionally. It is the only proper 4WD with a seven-seat option without needing to spend in excess of 6 figures.

As a bonus, it is also more comfortable than ever before.