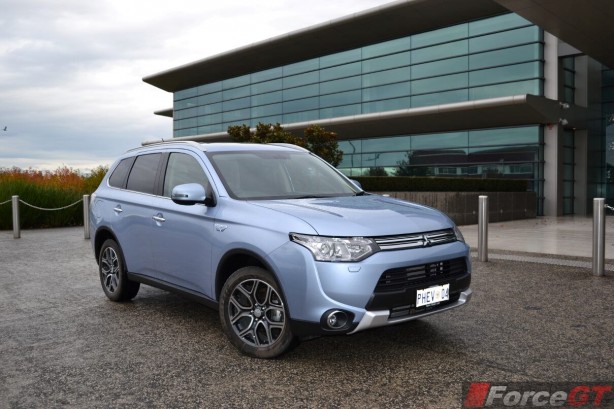 The new Mitsubishi Outlander PHEV is the Japanese carmaker’s second attempt at the world of electric propulsion, after the introduction of the Mitsubishi i-MiEV in 2009. While the five-door electric city car didn’t really take off as Mitsubishi had expected (due to its exuberant price tag), the brand has something to shout about with the PHEV this time around.

The Outlander PHEV – for Plug-in Hybrid Electric Vehicle – is the world’s first plug-in hybrid SUV. To the unknown, it looks exactly like a standard petrol or diesel powered Outlander, and drives just like a normal SUV. But the conventional ends here.

A culmination of over a decade’s of research into alternative propulsion technology by the firm has led to a completely new drivetrain for the Outlander PHEV. It consists of twin 60kW electric motors front and rear, a 12kWh lithium ion drive battery, 70kW output generator, lightweight front transaxle assembly and a 87kW/186Nm 2.0 litre four-cylinder MIVEC petrol engine to significantly extend PHEV’s driving range when the batteries run out of juice. 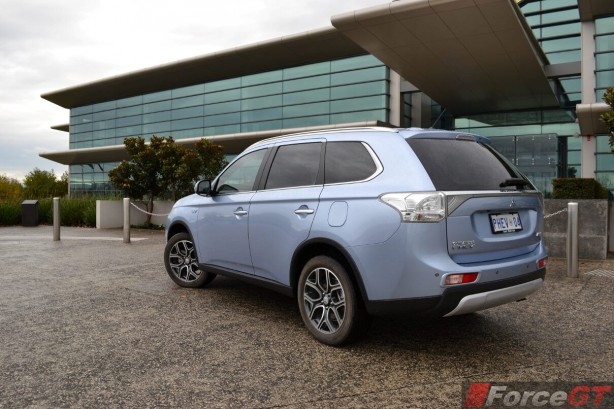 Charging is by means of plugging the supplied charger to a 15A domestic wall outlet. We question Mitsubishi’s decision to use a 15A plug instead of a more conventional 10A plug as used in other EVs, such as the Holden Volt. Yes, a 15A outlet gives a quicker charging time (approximately 6 hours) than a 10A outlet, but not all households have a 15A wall outlet, and owners should be given the choice as to which to use. Furthermore, the actual charging unit itself draws only 10A.

While most plug-in hybrids come with a hefty price tag, including Mitsubishi’s own i-MiEV and the Holden Volt, the Outlander PHEV is only a five grand premium over a similarly spec diesel variant, at $47,490 for the base and $52,490 for the top-spec Aspire model. As compelling as it seems, Mitsubishi also argues that the PHEV has not compromised on any of the standard Outlander’s space and features, while sipping an unreal 1.9L of fuel per 100km in the combined cycle.

Indeed, the PHEV is just another Outlander, a normal family SUV with 5 seats, decent headroom and legroom, and loads of storage spaces. It’s able to retain the practicality and sensibility because from the outset, the Outlander (launched in late 2012) has been designed and engineered to accept the necessary electric motors, batteries, equipment and inverters required for a full petrol-electric hybrid set-up. 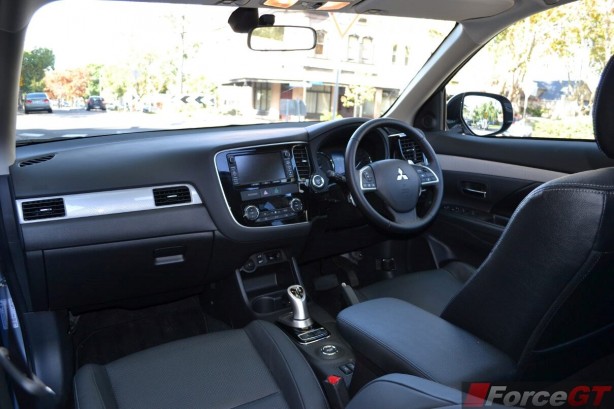 Mitsubishi’s approach to bringing hybrid tech to a conventional SUV is a unique one and works rather well. Instead of using mechanical linkages and drive shafts to channel drive to all four wheels from a single power source, the Outlander PHEV uses a twin motor set-up with independent 60kW electric motors located directly on each axle. The system offers permanent electrically driven all-wheel drive.

The Outlander PHEV automatically switches between three driving modes depending on power demand and battery charge. In full EV Mode, the front and rear electric motors drive the vehicle on sole electric power, with a total “guilt-free” range of about 50km on a single full charge (tested). In Series Hybrid Mode, the electric motors drive the wheels while the engine acts as a generator to supplement the energy provided by the batteries during heavy acceleration or going up a slope.

The system switches to Parallel Hybrid Mode when even more power is needed. In this mode, the engine provides direct drive to the front wheels, assisted by the electric motors.

At any time (provided there’s fuel in the tank), the engine can be started manually to charge the batteries at a touch of a button. The batteries can also be maintained at a certain charge level by the engine by engaging the “Save” mode. This is particularly useful when you wish to run on electric power only on routes more suited to it, so that you get more miles out of the batteries.

A feature called Regenerative Braking, active at all times, harvests the otherwise wasted kinetic energy from braking or coasting to recharge the batteries. Unlike most Hybrids we have driven, there’s no spongy feel to the brakes in the PHEV, surprisingly. 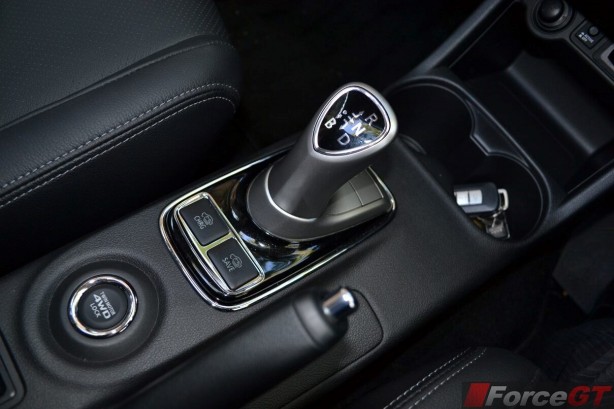 Perhaps, the most amazing thing about this whole petrol-electric drivetrain is how seamlessly it is switches from one mode to another. In fact, you get in the Outlander, drive as per normal, and let the electronics work it all out for you. Running on battery power, the Outlander is eerily quiet. There is adequate power too for the daily commute. The linear torque produced by the electric motors available right from the get go makes for an even better drive around town compared to the non-electric Outlanders.

In typical electric vehicle fashion, the drive is impressively refined. At high speed, the myriad of battery banks and electrical drive components seem to have improved Noise, Vibration and Harshness (NVH) levels in the PHEV compared to the non-hybrid versions.

The Outlander PHEV tips the scale at 1,810kg – 200kg heavier than a similarly specced diesel model, which is surprisingly not too heavy for a mid-size SUV with its entire cabin floor stuffed with batteries. And you don’t really feel much of the added weight around corners thanks to the well tuned suspension providing good balance between comfort and handling. 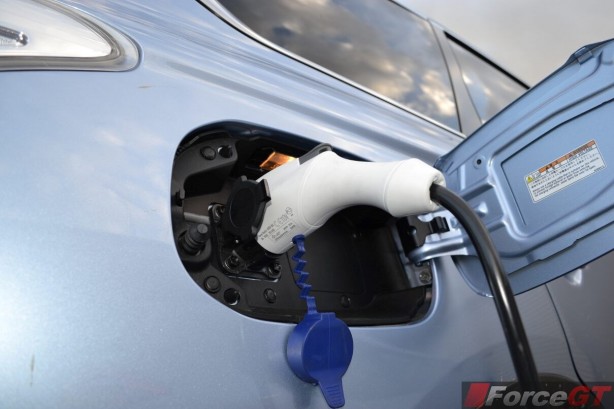 So, is the claimed 1.9L/100km fuel consumption figure just a marketing gimmick? With the battery on full charge, we put the PHEV through saturated road courses covering both city and freeway driving with varying traffic conditions, and recorded its fuel average after travelling a further 10km after depleting the battery. We managed 2.1L/100km, still pretty darn impressive.

Based on the current electricity tariffs, fully charging the PHEV costs about $2.00 during off-peak period. That money will get you about 1.5 litres of diesel at the bowser, which equates to about 20km in range in the diesel Outlander. The PHEV can do over 50km on a full charge, so there is no doubting its fuel economy advantage.

Hypermiling the PHEV further will require clever use of the regenerative braking feature, which can be dialled up or down using the selector lever or paddle shifters to regulate the degree of energy recovered through regenerative braking. Though it does contribute to a slight improvement in EV range, using it is anything but fun. 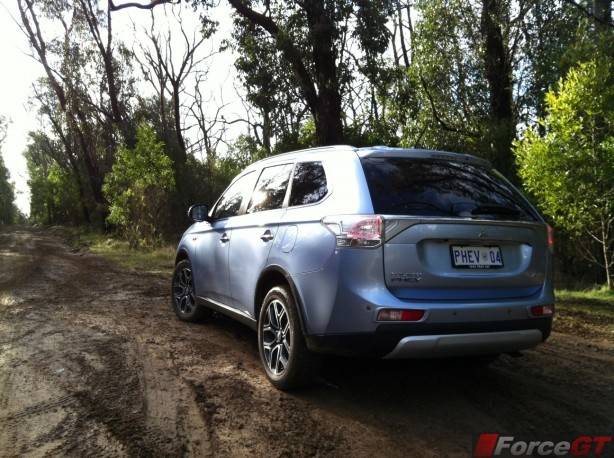 All seems quite promising on the black top, but what about off road? We are glad to say the PHEV, with its twin electric motor set-up, crawls over most easy to medium grade off-road tracks with ease. This is largely thanks to the strong torque, courtesy of the electric motors. In fact, we find the experience more pleasant in the PHEV, as a constant application of throttle – without the need to regulate the revs as in a diesel or petrol SUV-  is all that’s needed to traverse across off-road country. And the best thing is, you do this in complete silence.

Towing capacity in the PHEV is rated at 1,500kg – 500kg less than the diesel, but still enough to tow a medium-sized caravan or trailer.

The Mitsubishi Outlander PHEV is a welcoming breath of fresh air. All the cool tech do come in a slight premium, but you get a genuine, all-condition petrol-electric SUV with space for the family and true advantage in fuel economy.