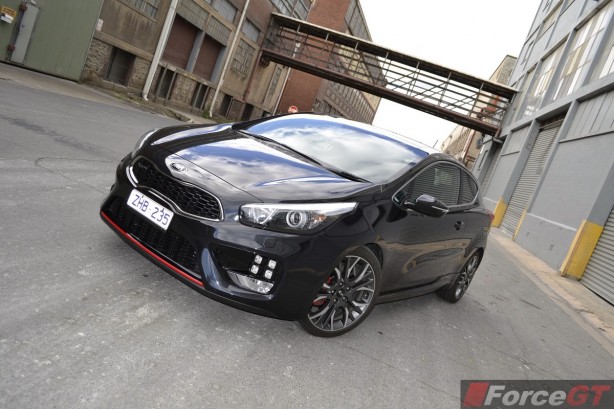 The Power to Surprise.

That’s Kia’s tag line and they really are all about the power to surprise, especially with their European-sourced and curiously named ‘pro_cee’d GT’.

The surprise here is how well it drives! I don’t usually spoil my review by giving my verdict at the start, but I am making my first exception – the Kia pro_cee’d GT is brilliant! It’s the best Kia I’ve tested and one that finally mounts a convincing challenge in the coveted hot hatch segment.

While most Japanese and European carmakers tightened their belts during the Global Financial Crisis, the Koreans continue to invest in the critical areas of R & D and design. And their effort is clear for all to see today. 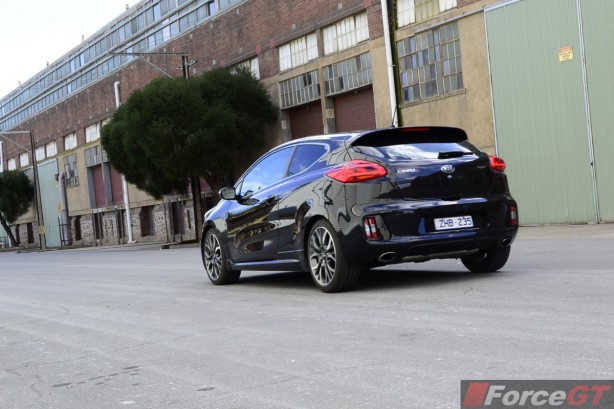 Hyundai and Kia have leap frogged most of their Japanese mainstream rivals in terms of technology and design, by bringing desirable products to the market that are no longer inferior.

And while the pro_cee’d GT may share its engine and transmission with Hyundai’s quirky Veloster, the Kia has been to the local ride and handling school and graduated with impressive manners.

Its handling is sharper than any Korean cars I have encountered, and even puts some of the Japanese, such as the Nissan Pulsar SSS and Mitsubishi Lancer Ralliart, to shame.

The Slovakian-built GT shares its basic underpinnings with the excellent Cerato range, including the Cerato Koup. However, while its lesser siblings, and the Hyundai Veloster, both make do with basic torsion beam rear suspension, the GT gets the more sophisticated multi-link set up. Together with increased damper rebound and compression rates, stiffer springs and bushes and a larger rear anti-roll bar, the GT rides and handles noticeably better than the Veloster. 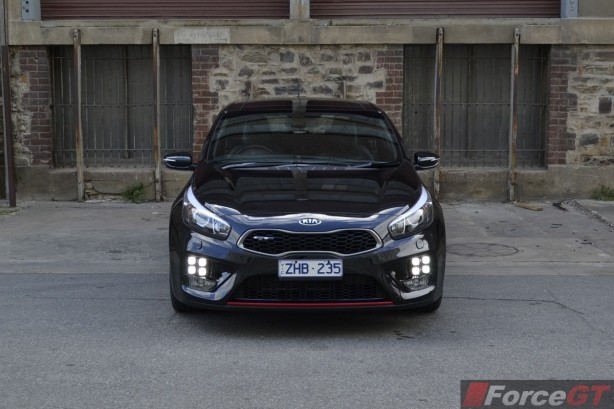 Compared to the closely related Koup, the GT has a firmer ride, but is also sharper around the bends. It turns-in with zeal and is mostly disposed of any body roll. Its 18-inch alloys shod with Michelin Pilot Sport 3 tyres also grips with the conviction of a Liberal Party member on election night, resisting both under and oversteer even at its limits.

The three-door hatch’s steering is refreshingly quick and direct, too, and is properly weighted. But wouldn’t go astray with slightly better feedback. I also prefer a sharper throttle response as the GT could use with more immediacy.

Its familiar 1.6-litre turbocharged four-cylinder engine dishes out 150kW @ 6,000rpm and 265Nm from 1,750-4,500rpm. Mated with a slick shifting and precise 6-speed manual transmission, the GT will hit triple digits in a claimed 7.7 seconds, which curiously is 0.3 seconds slower than the Cerato Koup. We managed to stop the clock at around 8 seconds after several attempts – not particularly quick in the hot hatch realm but not bad for a first effort from Kia. 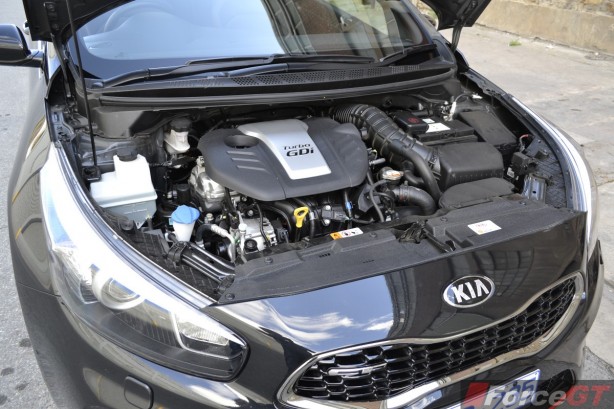 There is a good dollop of useful mid-range torque that will let you attack the bends at a taller gear than you might expect if you apply throttle early. On fast sweeping corners, the GT remains firmly planted and composed.

What’s disappointing though, is the car’s engine note that underscores the Koreans’ relative lack of experience in producing a hot hatch. While there’s a soft exhaust burble if you happened to be standing near the exhausts, inside, the noise is hardly inspiring.

The Kia pro_cee’d GT is certainly pleasing to the eyes, with a lower and broader front end treatment. Its wide central lower air intake is underscored by a red trim line that is almost a pre-requisite on any self-respecting hot hatch. This is flanked by high-gloss black inserts on either side that houses the GT’s unique ‘ice-cube’ LED daytime running lamps and foglights. 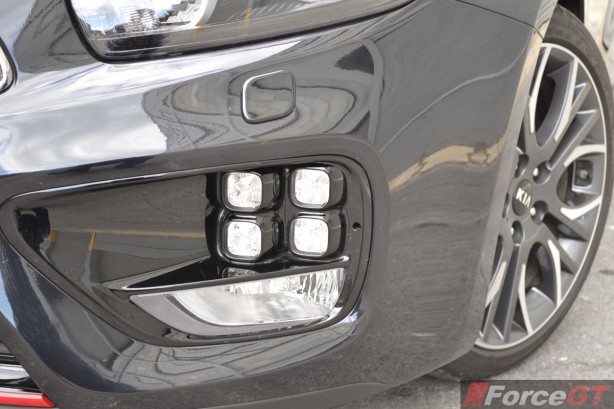 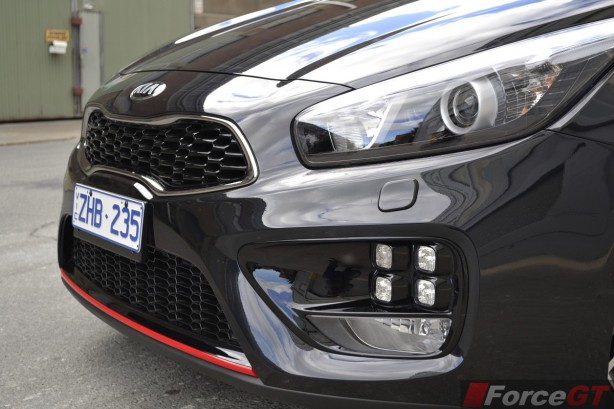 At the other end, the broad stance is evident in its bold shoulders and steeply raked rear hatch glass. This is further emphasised by the car’s diffuser and split dual exhausts.

Inside, the pro_cee’d GT’s left hand indicator stalk highlights its European origin. In fact, Australia is the only country outside of Europe to be getting the pro_cee’d GT.

The driver and front passenger are hugged by a pair of standard Recaro sports seats – a first for Kia and adorned with the ‘GT’ logo. They, and the three rear seats, are covered in part leather and part suede, with contrasting red stitching. Other sporty highlights include alloy pedals, high-gloss black features on the air vent surrounds, front console tray and door trims and alloy kick plates on the door sills. 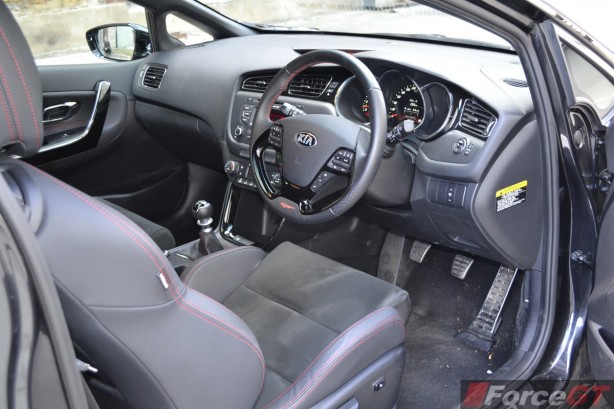 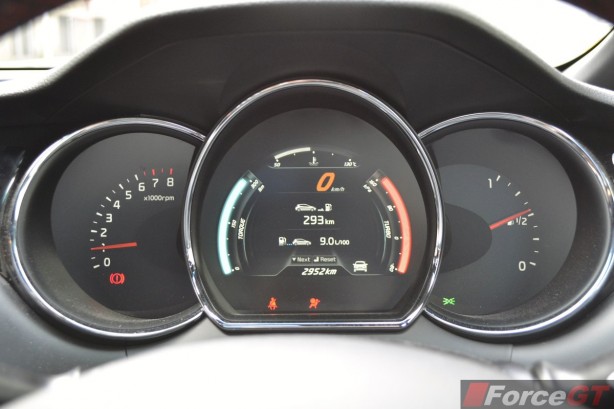 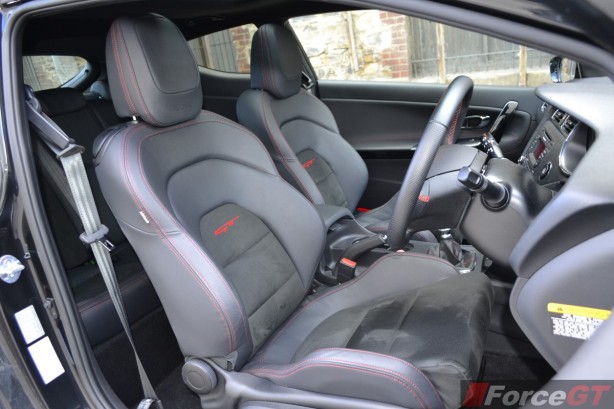 Kia’s familiar three-dial instrument layout is enhanced by a unique TFT LCD multi-function high-definition central display that enables the driver to switch between analogue-type or neat GT performance digital display via a ‘GT’ button on the steering wheel.

Kia Australia has brought in two models to Australia – the GT, which is priced from $29,990 and the GT Tech, as tested here, is priced from $33,490. The latter adds a sunroof with electrically operated sun-blind, privacy rear glass, push button start, a luggage net and HID headlights with adaptive function.

Not only is the pro_cee’d GT the best Kia the brand has ever produced, it also happens to be the best looking. While it won’t challenge the hot hatch status quo just yet, I have no doubt that they should be worried in couple of generations.