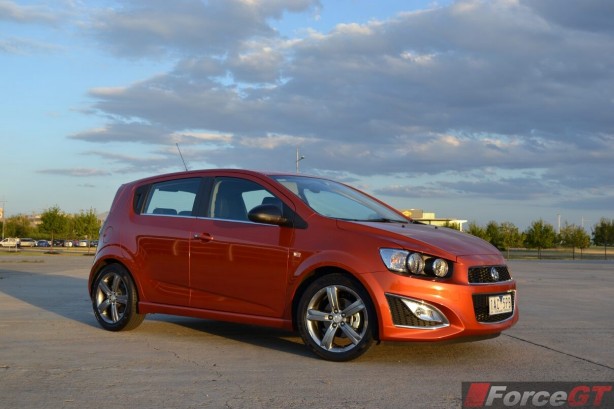 The Holden Barina RS is the latest addition to the company’s city hatchback. Joining the lineup as the sports model, the RS’ extra punch comes from a 1.4-litre turbocharged 4-cylinder petrol engine pinched from the locally made Holden Cruze. It produces 103 kW of power at 4,300 rpm and 200 Nm of torque from 1,850 rpm. The engine is paired with a six-speed manual transmission or an optional six-speed automatic with Active Select driving the front wheels.

Packing an additional 18 kW and 45 Nm over the standard Barina, the RS makes the drive to the shops a little more fun. But there is nothing really sporty about the engine. Wind it up and all you get is a coarse, uninspiring grumble to the red line. It’s far from refined and isn’t very revvy either. If the soundtrack up front is poor, then it’s virtually nonexistent at the back.

The six-speed manual performs well in day to day traffic, but hit the open road for some sporty driving, it starts to get clunky and sticky. The six-speed automatic also lacks the excitement, with the silly manual shift button infuriating to use. It’s slow to kick down and isn’t the smoothest automatic tranny we have come across, especially in the first few gears. 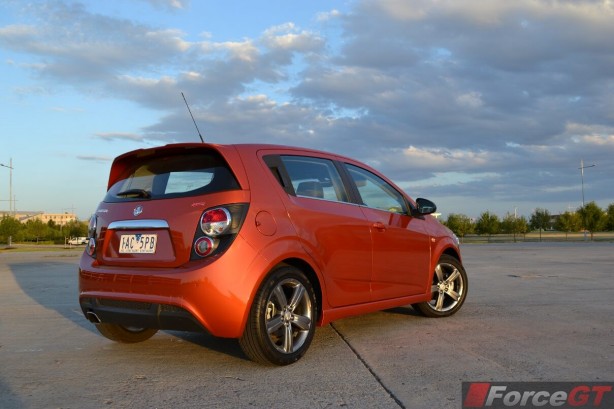 It’s a shame the drivetrain isn’t quite up to the scratch as the Korean-built RS handles surprisingly well. Sitting 10mm lower than the standard car, the RS has additional body bracing to deliver a stiffer body structure. It also gets performance-tuned dampers with increased spring rates, stiffer shock absorbers and new 17-inch alloy wheels.

The chassis is balanced and the suspension is very well sorted. Around the bends, the 1.2 tonne Barina RS feels very chuckable. It has good body control and excellent grip. The brakes – all discs in the RS as compared to the drum rears of the standard Barina – are strong and progressive, wet or dry.

There is also no shortage of effort in tweaking the steering for sharp response and good feedback thanks to the involvement of Holden engineers in the development of the Barina RS’ steering to suit Australian driving tastes at Holden’s Lang Lang proving ground in Victoria. However, its turning circle is relatively big for a small hatchback. 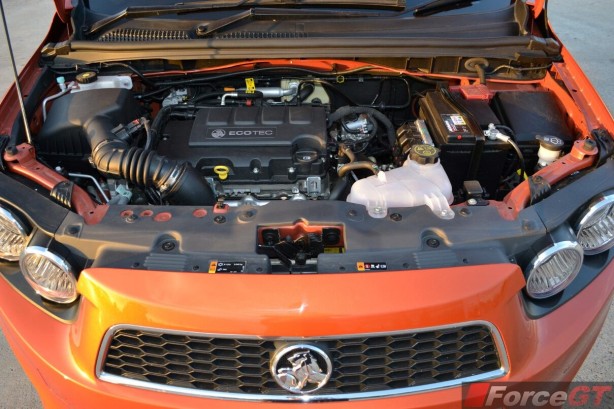 Despite its admirable handling, the Barina RS is still lacking the dynamics and point to point agility of a hot hatch – think Ford Fiesta ST or Suzuki Swift Sport – although Holden also admits the Barina RS is more warm than hot hatch. There is still room for tightening the handling a little bit more.

Rolling on lower profile tyres than the regular Barina, the RS suffers from a slight increased in road noise, but ride quality remains reasonably supple across most surfaces. Over our week-long evaluation across saturated roads, the sports hatch’s fuel consumption averaged 7.4 litres per 100km (manual), about a litre over the claimed 6.5 litres per 100km, which isn’t particularly impressive for a small car. 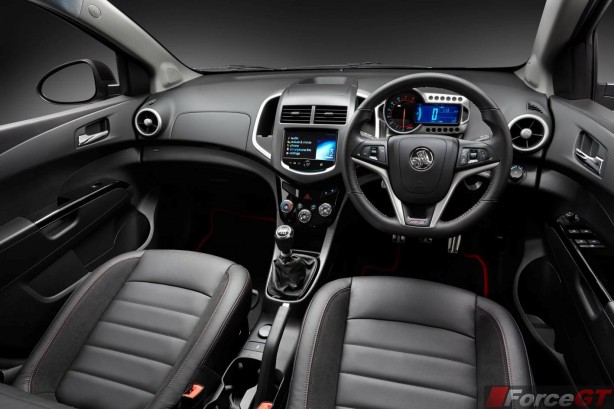 While the car is generally well put together, its cabin quality falls short of class standard, with hard brittle plastic the order of the day. Most notably though, the doors feel hollow and does not exude the solidity of some of the Barina’s contemporaries.

The Holden Barina RS needs a sportier drivetrain to match its surprisingly capable handling and dynamics. While it’s not an all-out hot hatch, its starting price of just $20,990 plus on-road costs significantly undercuts most of its direct rivals. And this should be enough to persuade buyers who are looking for something just a little sporty rather than outright performance.