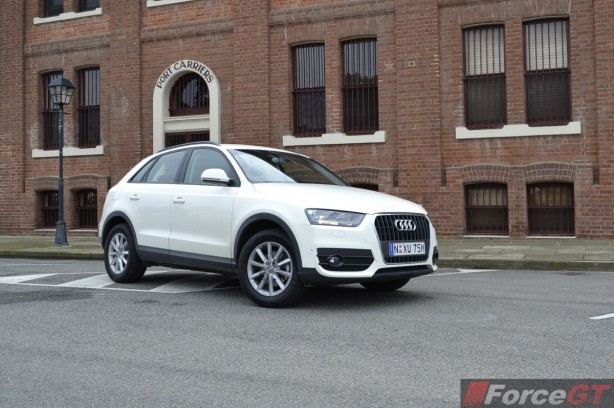 The Audi Q3 is the premium German brand’s smallest SUV and also one of its most popular. It was one of the first to the fray, beaten only by the niche carving BMW X1, and certainly coming to the party earlier than the fashionably late Mercedes-Benz GLA.

Based on the previous-generation Audi A3’s platform, the Q3 is available in a range of petrol and diesel engines ranging in outputs from 125kW to 155kW, and paired with Audi’s Quattro all-wheel drive system.

That is, until now.

So, armed with a smaller engine, two-wheel propulsion and a sharp pricing, can the lovable Q3 not only see off stiff new competition entering the field it once dominated, but also put up a case against the $11,310 cheaper, but mechanically similar Volkswagen Tiguan 118TSI? 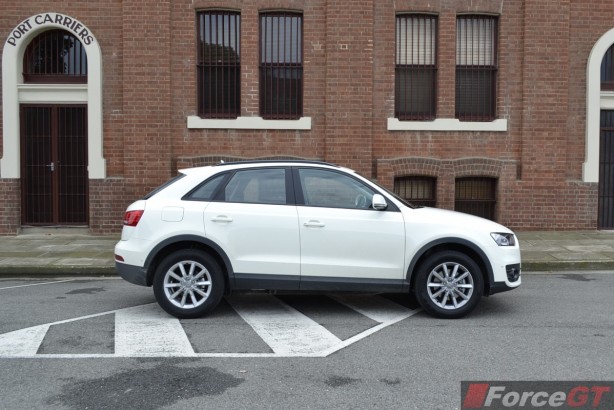 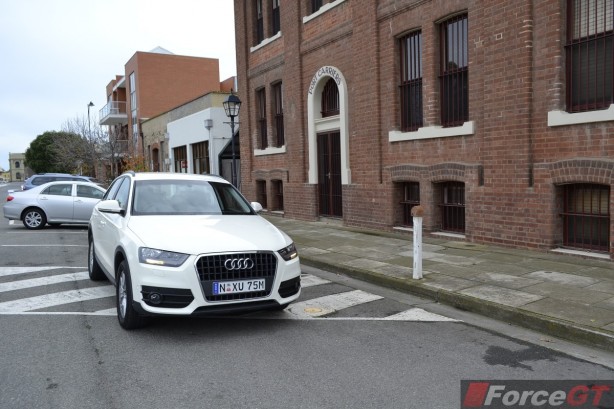 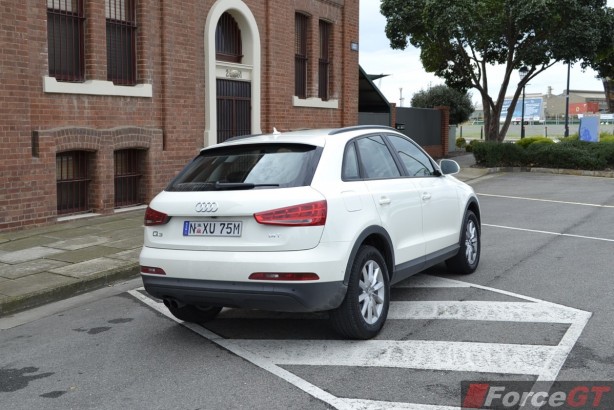 More of a hatchback on stilts than a proper SUV, the Audi Q3 is one of the more aesthetically pleasing crossovers in the premium segment despite its age. There is a hint of Porsche Cayenne in its fast back rear hatch, while its shapely front fascia – dominated by the brand’s trademark single shield grille and swept-back headlights – is pure Audi, understated but elegant.

Some may find the Q3’s lines somewhat predictable, with the aforementioned sloping rear hatch and clamshell tailgate being the car’s most exciting visual features.

Of course, being an Audi means the Q3’s interior is first-rate. Fit and material finish are second to none. Everywhere you look, the cabin is exquisitely crafted, despite its modest pricing. The stereo controls get a knurled metal finish while the matte black centre console is a showcase of simplicity and elegance.

However, the manually folded MMI screen and the clickable climate control switches marred an otherwise slick and flawless cabin execution.

At less than 4.4m long, the Q3 is smaller than its platform mate, the Volkswagen Tiguan, which measures 4,427mm. The Audi is also slightly wider and nearly 100mm lower than the Vee Dub.

Its ‘diminutive’ dimensions make it rather like a tall hatchback rather than a full-on SUV. Mind you, drivers will still appreciate its lofty driving position and SUV-like vantage point. 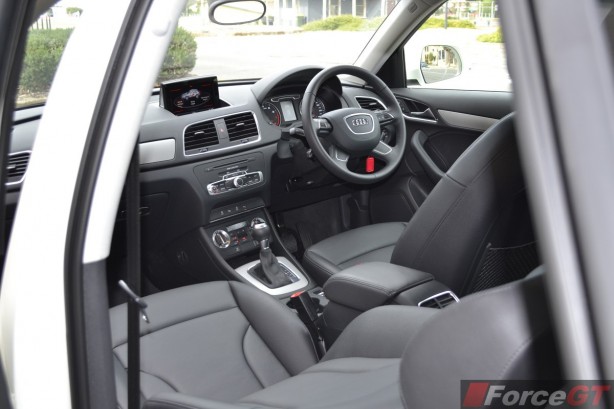 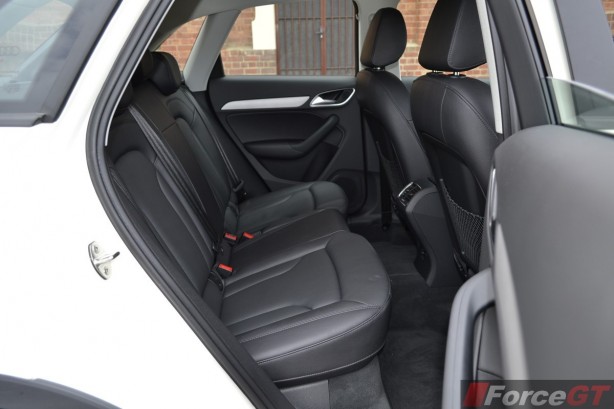 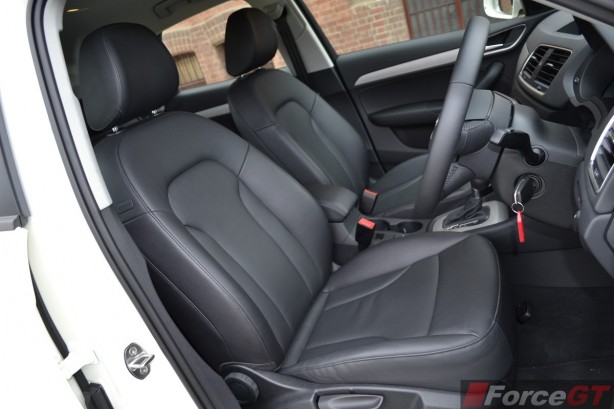 What’s annoying though is the Q3’s steering that doesn’t reach far enough towards the driver, necessitating a somewhat upright driving position.

The rear seats will accommodate average-sized adults happily but lankier passengers may find leg and rear headroom a challenge, thanks to the plunging roofline.

Further aback, the Q3’s cascading hatch is a wraparound design that lifts the taillights with it for an extra wide opening that reveals a 460 litres boot space, which surprisingly, is 65 litres more cavernous than the Volkswagen Tiguan. A further 905 litres are liberated once the rear seat backrests are folded. Ironically, the Tiguan gets 1,115 litres more once the seats are folded. 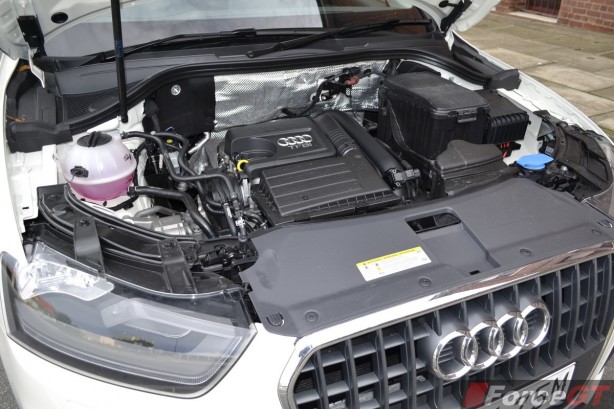 It is one refined little unit equipped with an engine stop/start system that fire up with the gentleness of a flapping Monarch butterfly. It is audible when given the prod, but is mostly muted and faint.

Like a well-trained butler, the S tronic twin-clutch gearbox delivers its cogs imperceptibly and rapidly, with the engine responding with quick spurts of useful thrust. There is however, some evidence of turbo lag, especially in the lower reaches of the torque curve.

Audi claims the Q3 will hit triple digits from a standstill in 8.9 seconds, while returning a rather impressive combined average of 6.2L/100km. We managed to stop the clock at 9.5 seconds, while averaging 8.6L/100km of predominantly urban driving, plus a few enthusiastic laps of our favourite black top. 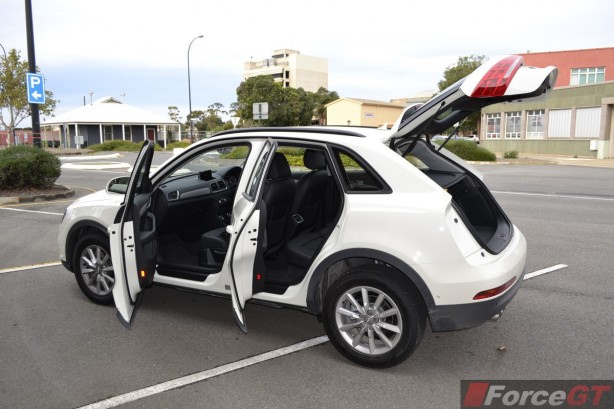 The Q3 is one of the most car-like crossovers that we have tested. Despite being a front-wheel drive, there is a decent amount of grip and good body control. Although there’s more body roll than a regular hatchback, due to its higher centre of gravity, it corners relatively flat for tallboy. There isn’t much understeer to content with even in the wet, except when pushed hard.

Its ride is supple around town, smothering most road surface imperfections with aplomb, but is firm enough around the corners to inspire confidence.

What’s disappointing is the Q3’s electric steering. It isn’t the most talkative and feels too light and artificial. There is a sense of disconnection with the rest of the car, which is a shame as the Q3 is surprisingly capable around the corners. 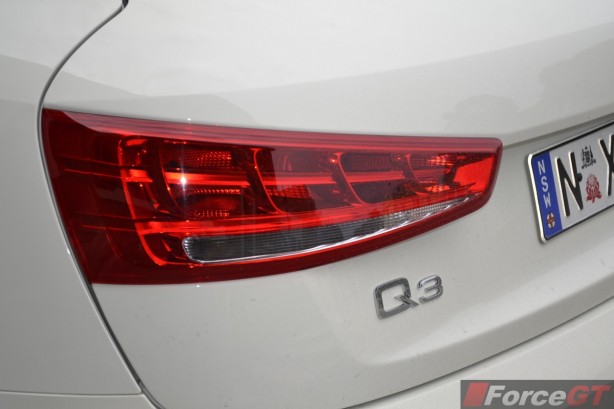 Like all Audi’s, the Q3’s built quality is peerless. There is a hefty feel to all switchgear and its body panels are well-aligned.

The test car, with less than 3,000km on the clock, did throw up an Emission Control System malfunction warning light 5 days into our week long test though. The issue however, isn’t deemed to be serious as it is likely due to the intake manifold flap which controls the fuel/air mixture. The result is reduced fuel efficiency. 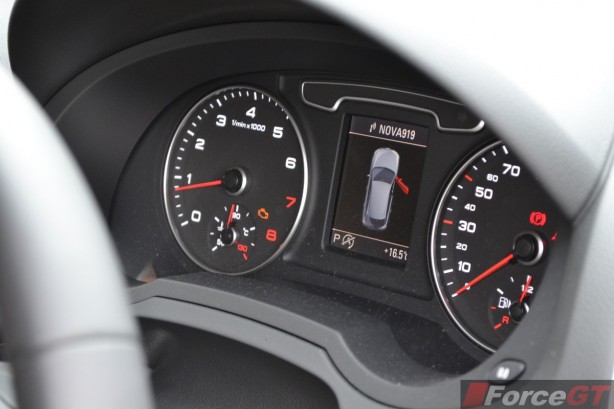 The 1.4 TFSI Q3 shares its specification with the 2.0 TDI Quattro Q3, which means it gets 17” alloy wheels in 10-spoke design, leather upholstery, dual-zone climate control, automatic headlight and wipers, Bluetooth with audio streaming and driver information system amongst others.

Our test car is also equipped with the $3,790 optional Technik pack, which adds colour driver information display, MMI navigation plus and Audi parking system plus with rear-view camera, park assist and area view. 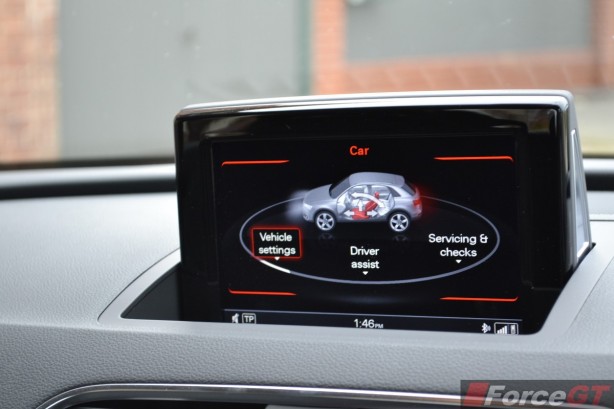 Of course, this is only one of five irresistible optional packages that you can tick, which all up will add a further $14,240 to the price. OUCH!

There are some little niggles though, like the lack of vanity lights for both front passengers and the lack of linings in the door bins.

The Audi Q3 is a five-star ANCAP crasher, with 6 airbags and the usual complements of electronic safety aids such as ABS, electronic stability control and brake assist.

Against its direct rivals, the 2014 Audi Q3 1.4 TFSI makes a compelling case. It is the cheapest premium entry-level SUV on the market, yet is relatively well equipped. It drives well and has a perky yet refined engine. It is arguably one of the better looking ones as well, safe for the concept car-like Range Rover Evoque.

But compared to the mechanically similar Volkswagen Tiguan 118 TSI, the Q3 suddenly appears overpriced, not to mention shortchanged in the power department. Yes, you do get the more desirable overlapping rings on the front grille and one of the best interiors in the automotive world, but if those are immaterial to you, the cheaper VW is just as good.