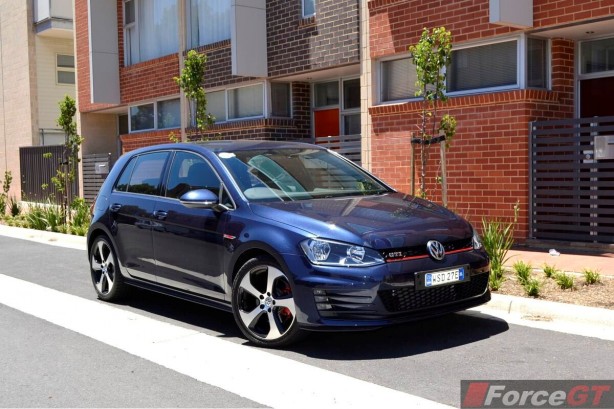 GTI – the three letters that is synonymous with Volkswagen’s famous hot hatch. Based on the equally celebrated Golf, the original Mk1 GTI was a guerilla project by a handful of VW engineers who saw the potential in the Golf’s chassis.

The philosophy behind it was simple. Take a basic economy car and give it a high performance package, thus creating a practical, sporty and more importantly, an affordable sports car.

And with that, Volkswagen has widely been regarded for single-handedly creating the hot hatch segment. This formula has since been copied by almost every other manufacturer. While hot hatchbacks are now as ubiquitous as misbehaving Australian tourists in Bali, the Golf GTI is often the yardstick where others are judged.

Sure, there are periods in the GTI’s history where Volkswagen would rather forget, like the comparatively disappointing Mk3 and Mk4, but the Mk5 and impressionistic Mk6 marks a return to form for the three-letter word.

With the stage now crowded with highly capable new comers, like the current king of hot hatch – the RenaultSport Mégane RS265 and the new Ford Focus ST, the fight has never been more intense.

So, can the latest Volkswagen Golf GTI snatch the king of hot hatch back from the pesky French? Let’s find out.

Unless you were born yesterday, it’s impossible to mistaken the Mk7 Golf GTI for anything else. And while it may appear to differ little from the previous-generation at first glance, every panel on the new car has evolved slightly for a sharper look. 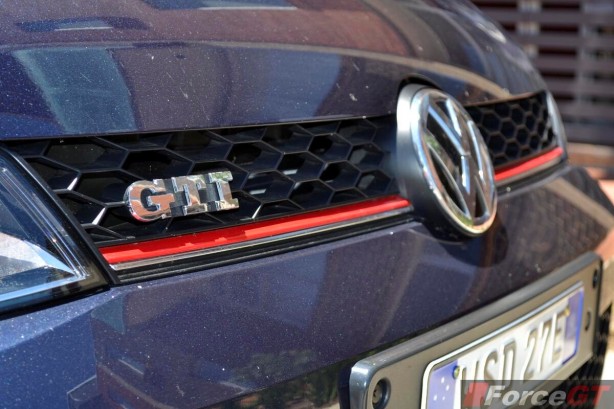 Like all its forebears, the seventh-generation sports typical GTI insignias – a red trim strip on the honeycomb radiator grille (now one instead of two strips and extends into the headlights when optioned with fancy bi-xenon headlights) and chic tartan seats that is now called Clark.

At the front, the fog lights are now LEDs and are slashed by three lateral, high-gloss black aerodynamic fins, while the lower air intake surround is now painted in body colour. 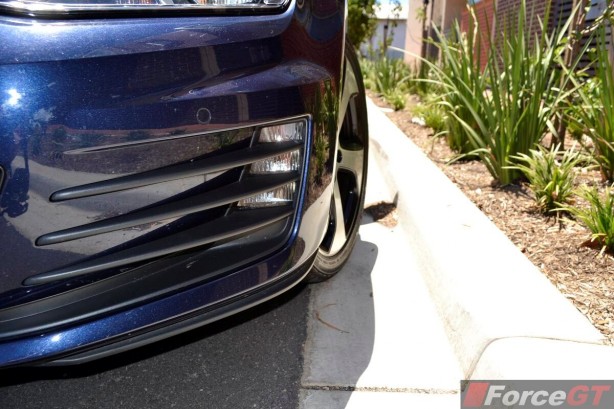 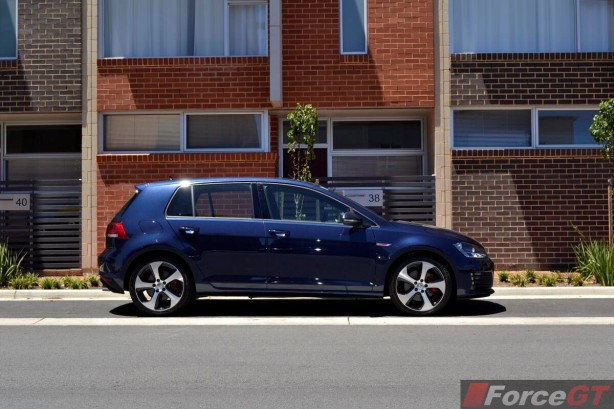 Moving along the side, the redesigned 18-inch ‘Austin’ wheels echoes the Mk6’s ‘Detroit’ design. There is now a red ‘GTI’ badge on the front wing of the car, placed at the height of the crisp character line. It cuts a sportier profile, too thanks to a bigger roof spoiler and a 15mm lower ride height.

Based on Volkswagen Group’s impressive new MQB (Modular Transverse Matrix) platform, the latest GTI is longer, wider and sits on a 46mm longer wheelbase. Its A-pillar sits further towards the rear, making the bonnet longer and visually shifts the cabin rearwards, endowing the car with a “cab-backward” effect, thus giving it a more premium look. 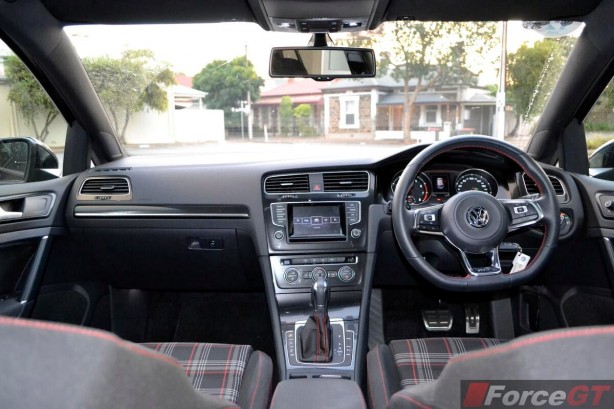 Inside, the previous-generation’s benchmark interior quality and ergonomics has been taken to an even higher level with fabulously tactile materials all-round. The ambience is one that is sportier than the regular Golf, with cool touches like the GTI-spec flat-bottom steering wheel with red stitching, red instruments needles, alloy pedals and black headlining.

If you were a Mk6 GTI owner, you’d be instantly familiar with what’s underneath the Mk7. Its 2.0-litre turbocharged four-cylinder engine now produces 162kW @ 4,500-6,200rpm and 350Nm @ 1,500-4,400 – 7kW and a considerable 70Nm more than before, both arriving earlier on the rev range as well. Thanks to a dual injection system – with direct and multi point injection – it is now Euro-5 compliant. 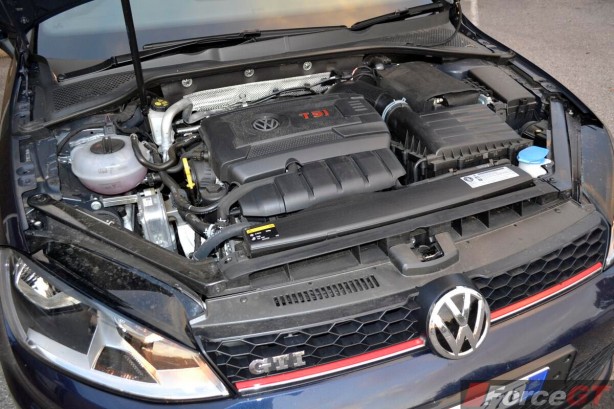 While it may not match the figures of its direct rivals, the sophisticated ‘EA888’ engine is delightfully refined and packed with useful low and mid-range punch. We managed 6.8 seconds for the 0-100km/h dash, against a claimed 6.5 seconds. With a proper launch control or a manual transmission (DSG tested), we suspect 6.5 or even better is easily achievable.

One of the enduring personas of the Golf GTI is its all-rounder every-day usability and the latest iteration deviates little from that. You know you’re driving something special yet sacrifices little in practicality and comfort. Handling is now even more composed and accurate around the bends, and gracefully compliant on the straights, thanks to the adoption of a progressive steering system and adaptive chassis control as standard.

A segment, and Golf GTI first, the progressive steering reduces steering lock-to-lock to just 2.1 turns (2.75 on regular models), eliminating any chance of the driver ever getting his/her hands in a twist (literally). It is well weighted, beautifully responsive and satisfyingly quick, while perspicuously telegraphing information from the wheels to the driver, providing a clear picture of the road ahead. 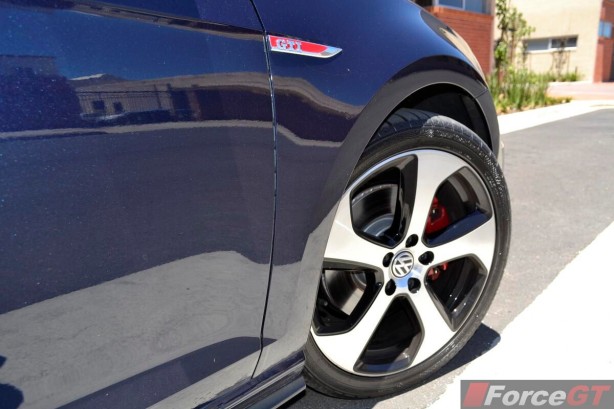 However, despite the extended electronic differential lock (XDL+) that brakes the inside wheels of both front and rear axles, applying power too early on exit from an apex can sometimes result in axle tramp on uneven surfaces. (It will be interesting to see if the upcoming GTI Performance that is equipped with an electronically controlled locking front differential can solve this minor irritation).

The second-generation adaptive chassis control system continues to offer three preset driving modes as before – Comfort, Normal and Sport – which are now selected under the “Driving profile selection” on the touchscreen, each varying the steering assistance, engine, throttle, ESP and suspension mapping.  In addition, drivers can now configure the system to suit their individual needs and store it under “Individual”.

A back-to-back comparison between the Mk6 and Mk7 GTI during the test is enough to convince yours truly that Volkswagen Group Australia’s decision to specify the adaptive chassis control as standard is a right one. 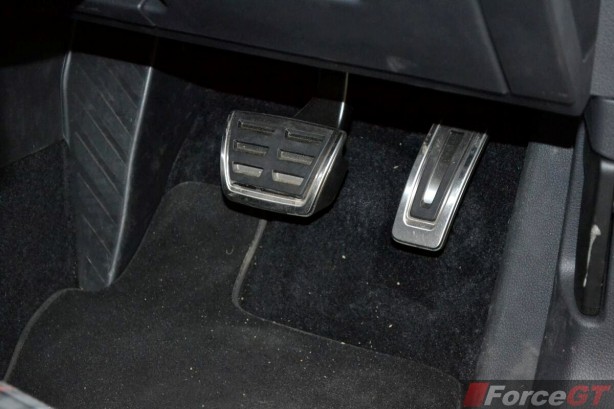 Its brakes are consistently linear and have a good feel through the pedals. Meanwhile, the electronic stability control system is one that is expertly calibrated. While you may never turn the system completely off, you hardly ever notice it’s there at all in everyday driving!

What’s disappointing though is the GTI’s engine and exhaust note, or the lack of. Unless you have no issue with driving in Sport mode all the time, where the engine is kept at a higher rpm, it just doesn’t sound very sporty, unlike the Mk6. 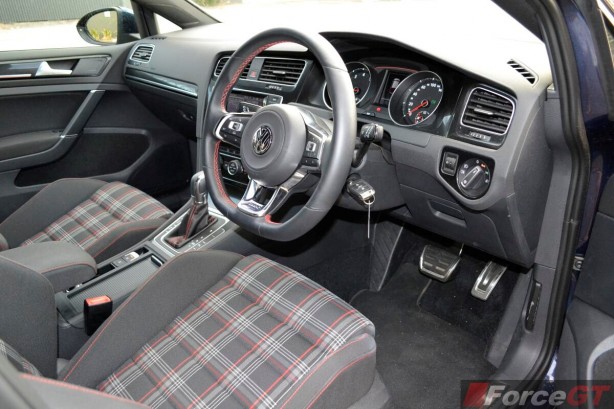 Trying to find fault in Volkswagen’s impeccable built quality is harder than trying to navigate in a foreign country with the map upside down while being blindfolded. It’s that good!

There is hardly a creak or rattle from the elegant interior and everything feels over engineered by those obsessive-compulsive German engineers. 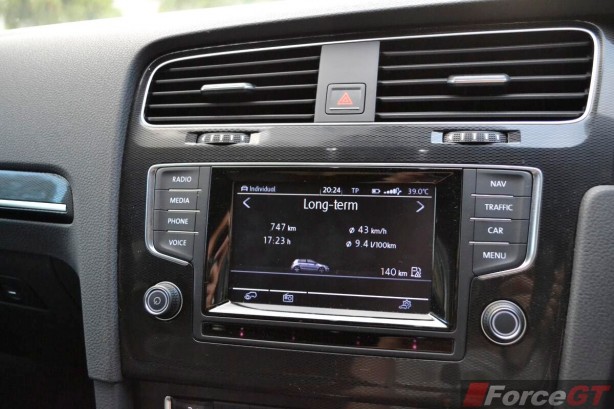 Our weeklong rendezvous averaged 9.4L/100km with merciless regards for economy. That’s almost 3 litres more than Volkswagen’s rather optimistic claim of 6.6L/100km for the DSG equipped GTI. However, driven sedately and on freeways, we have managed lows of 6.8L/100km.

Nevertheless, you will still spend a lot more time driving rather than visiting the petrol station than the skinny dude with the bright yellow RenaultSport Mégane RS265 in the next lane, or any other hot hatch in its class. 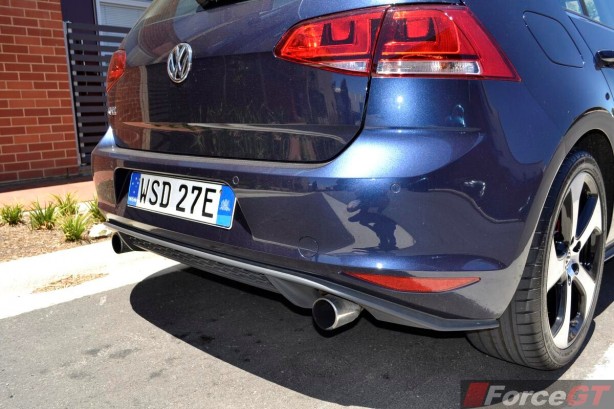 More power, better equipped and class-leading fuel efficiency. For all the tangible advances, the Mk7 Golf GTI remains largely an unchanged proposition from the Mk6. It’s comfortable yet competent, fast yet economical, stylish yet subtle – the perfect all-rounder.

It’s clinical brilliance is likely to please most people, and those looking for an everyday sports hatch.

However, for those who are after a more thrilling drive, the Renaultsport Mégane RS265 or the now defunct (in Australia) Opel Astra OPC might be your answer.

I also miss the engagement and aural excitement of the Mk6. Perhaps the GTI Performance might offer the answer. Stay tuned.