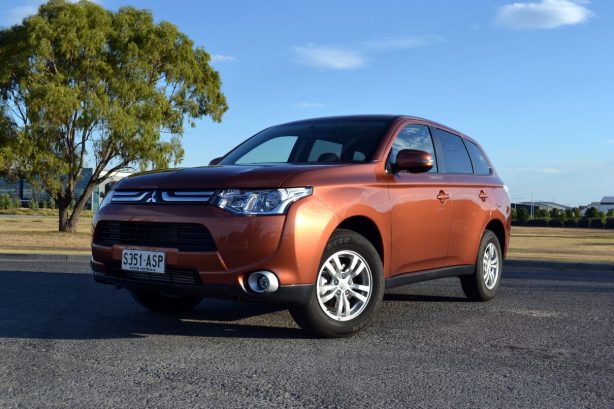 The Mitsubishi Outlander has always been a car high on the list for anyone looking to purchase a midsize SUV. It is car liked for its tough, go anywhere attributes and space for the whole family.

Now in its third iteration, the 2013 Mitsubishi Outlander is not just an all-new model for Mitsubishi’s popular SUV, it also represents a fresh new era for the company. For a start, the new Outlander features Mitsubishi’s new design language – a cleaner, uncluttered body shape characterised by bolder lines and a slim horizontal grille sandwiched in between new wraparound headlights.

More importantly, the new Outlander sees first use of Mitsubishi’s new generation of fuel-efficient engines aimed at achieving the best fuel consumption figure and CO2 emission levels in its class.

The 2013 Mitsubishi Outlander is offered with a range of petrol and diesel engines – 2.0-litre (tested) or 2.4-litre four-cylinder petrol and 2.2-litre turbo diesel (tested). The base 2.0-litre ES model is available with either a 5-speed manual or an automatic Continuously Variable Transmission (CVT) while the more powerful 2.4-litre only comes equipped with CVT. The diesel variants use a new six-speed automatic transmission, introduced for the first time to the Outlander diesel range.

It is obvious from the new Outlander’s design that the emphasis of Mitsubishi’s new design language is on aerodynamic and low drag. The grille for instant, has almost no opening to smoothen air flow over the bonnet of the car whilst the sculpted side profile reduces drag.

Of course looks is all subjective, but to me, the new design seems to have lost some elements of ruggedness. Whilst looking a lot more modern and fresh, the new Outlander design appears to have ‘soften’ a bit compared to its predecessor. However, it’s a design that will seem to grow on you overtime, at least to me as i find myself starting to get the hang of it all after a week of having the vehicle. 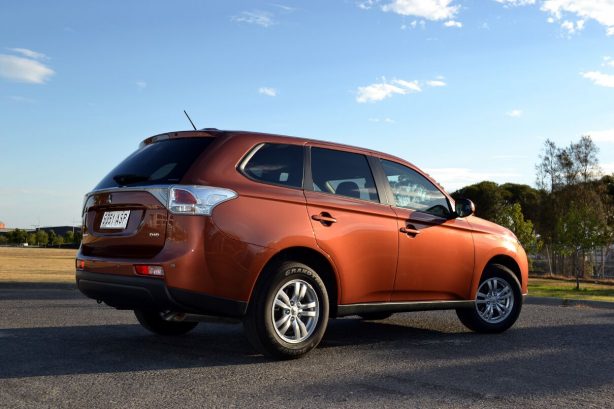 Hop inside and you will find things are a lot better. The driver-oriented dashboard is a step up in terms of quality, fit and finish compared to the old model’s plasticky cockpit. The simple yet functional layout of all the buttons, knobs and switches means you’ll be right on your way not too long after you got your keys to the new Outlander. The downside is that there is no air-con vents for the rear seats.

The Outlander comes in both 5-seater (ES, LS 2WD) and 7-seater (LS, Aspire) form. Both variants have decent front and rear legroom. However, the space offered by the third row of seats in the 7-seater loses out to some of its rivals (such as the Hyundai Santa Fe) and is realistically only good for children age four and below.

The CVT that comes with the petrol variants is smooth and matches well with the engines. True, it lacks the level of engagement you get from a conventional automatic but the seamless nature of the CVT in its power delivery gives a smooth and easy drive. 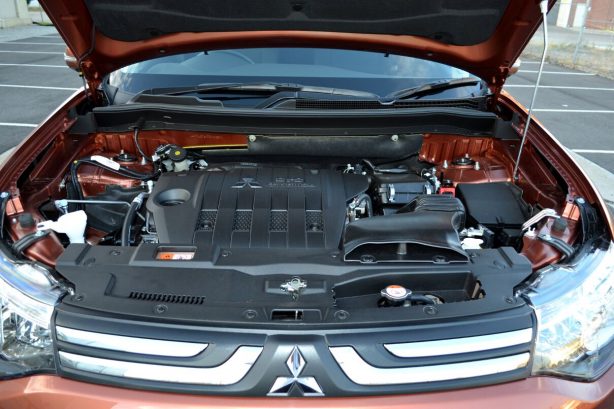 The 4WD diesel Outlander is rated at 110kW at 3,500rpm and 360Nm at 1,500-2,750rpm. It’s no fireball but it pulls strongly in the low to mid range. It’s also unusually quiet as long as you keep the revs below 2,500rpm. Cruising at top gear, the engine is muted and refined enough you can’t tell it’s a diesel from inside the cabin.

In fact, you don’t hear much noise at all as the new Outlander range is pretty well insulated from road and wind noise at highway speed.

The six-speed automatic equipped in the diesel is advanced for its class but has some annoying problems – it is slow in responding to throttle input and is reluctant to downshift when called for, especially in the lower gears, all in the name of saving fuel (keeping a higher gear). When it does eventually response and drop a gear, you would already have half your foot buried in the pedal. The next thing you get is an abrupt surge of power. Not fun. 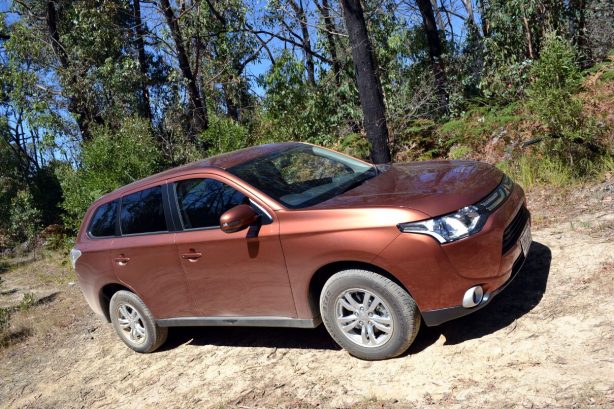 Having a soft sprung suspension setup and thick tyres, the Outlander soaks up most ruts and bumps well, giving a comfortable and relaxing ride. Of course, this comes at the expense of handling as the car exhibits quite a bit of body roll around corners. But as a family SUV, the Outlander handles decent enough and in 4WD form, offers lots of traction both on and off tarmac. The steering provides good feedback and response too.

Mitsubishi has step up a notch in terms of interior quality of the new 2013 Outlander. The is evident by the use of better quality soft touch plastics for the dashboard and door trim. The piano black accents also help lift things. All panels have good fitment and general build quality has improved compared to the previous model.

The other nice thing about the new Outlander is the trip computer in between the dials. Its full colour LCD conveys various information in high clarity and is better than those found in most of its rivals. 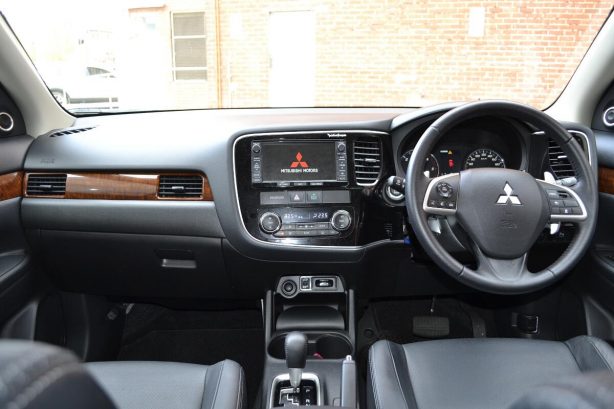 The magnesium paddle shifters are carried over from the Lancer Ralliart and Lancer Evolution SST. Not only they are a joy to use but it’s also nice to just have them there behind the steering wheel to give a hint of sportiness to the otherwise unimaginative dashboard.

Just like the new car design’s focus on aerodynamic, Mitsubishi’s new range of MIVEC engines have fuel-efficiency written all over it (see the connection there?), which didn’t come as a surprise as it seems car makers are so obsessed with out doing each other in the fuel consumption game these days that sometimes it is the only thing they care about.

So, if running cost is high on your list of concerns, you will be happy to find that the new Outlander gives excellent fuel economy. The 2.0 petrol ES model we tested recorded a fuel consumption figure of 7.6l/100km while the 2.2 diesel we also drove returned 7.1l/100km with equal split of highway and urban driving.

Apart from the improved engine, the lighter body (up to 100kg depending on model) also plays a part in contributing to the impressive figures. 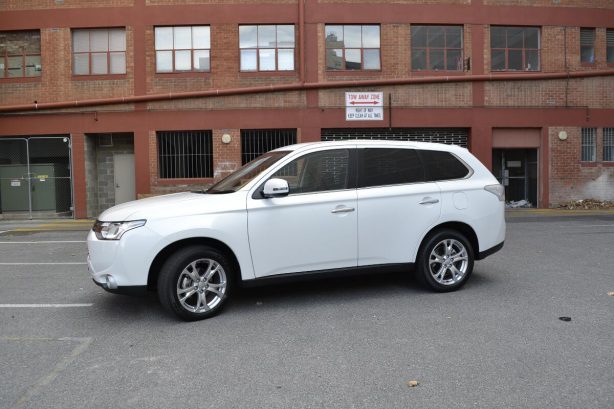 On highway cruising with the use of cruise control and ECO mode, we are confident both the 2.0 petrol ES and 2.2 diesel will have no problem covering over 1,000 km on a single tank of fuel. 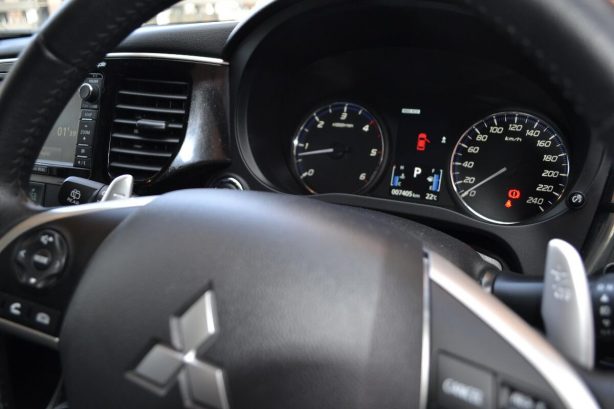 Rear cargo space is generous with 477 litres and 1,608 litres with 2nd row seats folded down.

Mitsubishi has step up its game on the 2013 Outlander by offering a better interior, improved fuel economy, added refinement and good versatility. Although it is not going to win any prizes for its driving dynamics and the new look has somehow followed a different approach, overall the new Outlander has just got better for those wanting a midsize family SUV without the associated costly fuel bills.

Unless you don’t often carry passengers, which the 2.0-litre petrol 2WD is adequate, the 2.4-litre petrol or the 2.2-litre diesel is the way to go.

Although the new Outlander is an improvement over the last model, only time will allow us to see how it fairs against its competition as the new 2013 Toyota RAV4, 2013 Honda CRV, 2013 Subaru Forester and new facelift Kia Sorento start to make their way into the market in the next couple of months.