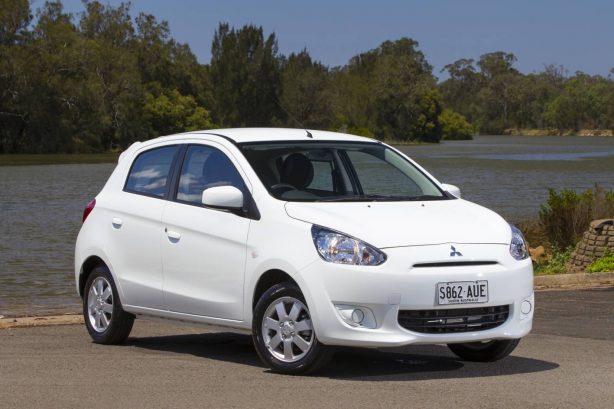 The Mitsubishi Mirage is back in Australia to replace the Colt, and compete in the city car segment with the likes of Nissan Micra, Suzuki Alto and the Volkswagen up! . It is a nameplate that should be familiar with Australians, as the last Mirage that sold here in 2004 was a popular choice amongst first car buyers.

Mitsubishi is hoping the new Mirage will appear on car buyers’ radar with a sharp pricing and generous equipment. The little Mitsubishi is available in three trim levels, starting with the ES from $12,990, the ES Sport from $14,190 and the range-topping LS from $15,490.

All are equipped with a 1.2-litre triple-cylinder petrol engine. We tested the mid-range ES Sport with optional CVT (continuously variable transmission), which is likely to be the most popular model in the range.

The new Mitsubishi Mirage dispenses with the Colt’s upright design in favour of something more curvaceous and modern. Like most of Mitsubishi’s current styling, it is inoffensive but verging on the bland side.

The cutesy headlights blend into the bonnet and front bumper neatly, while the sharp character lines along the side and rising side windows provide the only visual excitement to the car. It has a decidedly Japanese look to it. The bright paint colours on offer however, do add an element of fun to it.

If the Mirage looks slightly on the feminine side, it’s because Mitsubishi believes 65 per cent of the car’s target audience is likely to be female, with 2 in 5 of them under 35 and a similar proportion of them over 50. 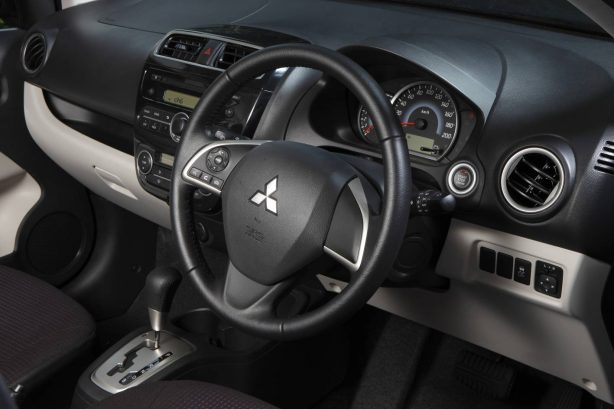 With that in mind, the Mirage succeeds in offering a cabin that is both functional, as well as aesthetically pleasing. The instrumentation is clear and all controls fall easily to hand. It is dotted with lots of useful cubby holes and has good-sized door bins.

There is 235 litres of boot space, which is a big improvement on the Colt’s petite 160 litres. It is however, still less than the VW up!’s 251 litres. This grows to 600 litres with the rear seats folded. Like the up!, the Mirage also has a handy two-level floor system for additional storage capacity.

Interior space is impressive in the Mirage. It can easily accommodate four six-foot passengers in comfort, although five adults would be a squeeze. All round visibility is also excellent, making reverse parking and changing lanes a cinch.

The new Mitsubishi Mirage is a refined little car and is easy to punt around town. The 57kW 1.2-litre 3-cylinder engine won’t win the traffic light drag-race, but does have enough power to motivate the car along. That said, it will struggle with a full load and on steep inclines, nevertheless, its output is on par with its rivals.

Like most cars with a 3-cylinder powerplant, the engine can sound raspy when pushed. Happily though, engine noise intrusion is well contained and only ever become noticeable if you are brutal with the accelerator pedal. 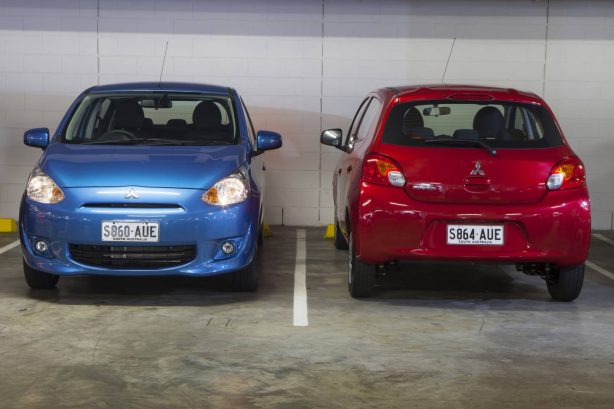 Unlike the VW up! which can be bouncy around town, the Mirage rides with a soft subtlety that suits its nature as a city car. Together with a light steering and tiny 4.6m turning circle, the car reinforces its chuck able character.

What’s not to like about its handling? Well, its steering is less communicative than the alarm clock in my bedroom and you may want to have car sickness bags handy for your passengers if you decide to hit the B-roads, as the Mirage’s soft suspension struggles to cope with the bends, resulting in body roll.

The CVT is also not the smoothest we’ve come across either. It feels jerky around town and slightly hesitant on take-off. However, these are unlikely to be deal-breakers for the Mirage’s target audience.

The interior of the Mirage is made mostly of hard plastics, but that’s common at this price range. However, its fit and finish isn’t as impressive as the VW up!, with a visibly big gap where the top of the dashboard meets the lower edge of the windscreen. 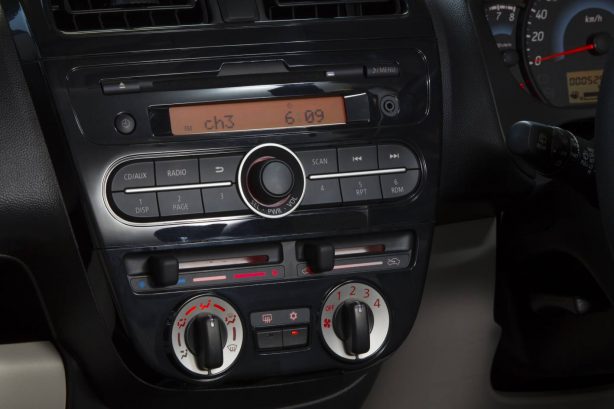 Attention to details is also not the Mirage’s forte, with lots of exposed screws on the lower dash and door grabs.

That said, the doors shut with a confident ‘thud’ and most switch gear appear to be robust.

With Mitsubishi’s reputation for reliability, couple with a 5-year warranty and fixed priced servicing that covers the first four services at 15,000km or 12 month intervals for $250, the Mirage should be easy on the wallet (or purse) too. 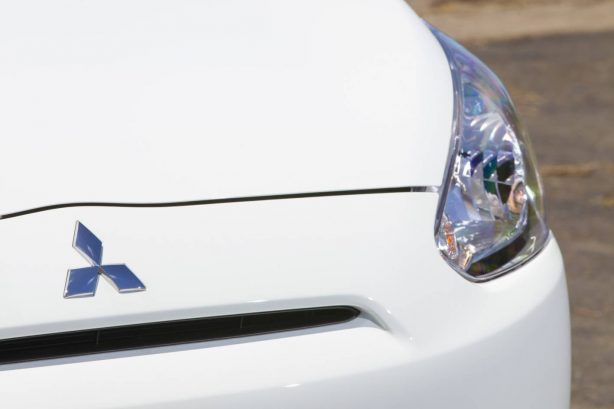 The Mitsubishi Mirage is aimed at Gen-Y first time buyers and those in the market for a second car. For the asking price, the car is very well equipped, with Bluetooth connectivity and audio streaming, USB/AUX port, CD player and leather-wrapped steering wheel with audio and phone controls.

The ES Sport we tested cost an extra $1,500 over the ES and buys an extra two speakers, 14-inch alloy wheels and roof spoiler.

Another $2,500 separates the LS from the ES Sport and adds automatic headlights and wipers, smart entry with push-button start, 15-inch alloy wheels and fog lamps.

The 2013 Mitsubishi Mirage is a well packaged, efficient city car that represents great value for money. What it lacks in driving dynamics and styling, is made up with refinement, a subtle ride quality, generous level of equipment and low running costs.