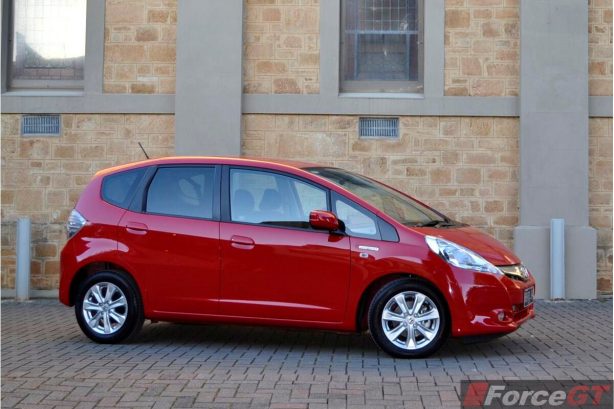 Fast, fun, exhilarating & engaging. None of these attributes can be used to describe the Honda Jazz. Yet, it is one of the brand’s best-selling models. Perhaps it’s the car’s commitment to practicality, versatility and reliability that bring thousands of buyers into Honda’s showrooms every year.

And now, Honda has added fuel-efficiency to the Jazz’s attributes with the introduction of the Jazz Hybrid. At $22,990 plus-on road costs, it is Australia’s most affordable hybrid, too. It joins the conventional petrol powered range that starts from $15,990. 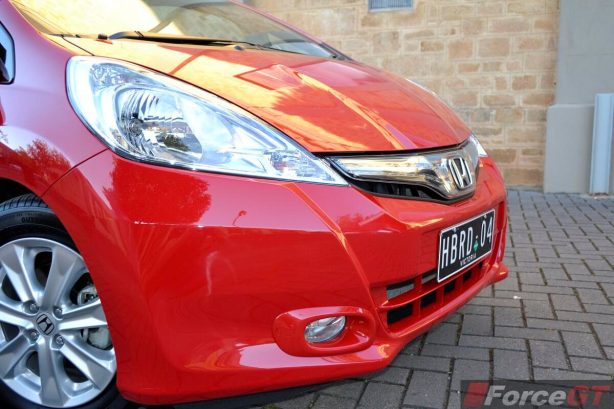 Based on the second-generation Honda Jazz introduced in 2011, the 2013 Jazz Hybrid remains faithful to its predecessor’s mini-van proportions, albeit with more angular lines and a raise central bonnet section for a more youthful and muscular look.

It is distinguished from the rest of the Jazz range with chrome-blue surround in the headlights, clear LED rear taillights, more chrome-blue on the front grille and tailgate garnish. To maximise aerodynamic efficiency, the air intake below the grille has been re-profile while maintaining sufficient airflow. Together with the unique design of the front grille, drag is reduced in the critical frontal area of the car.

While its functional yet undramatic exterior is designed for aerodynamics and mass appeal, it’s the car’s clever packaging that is its drawcard. 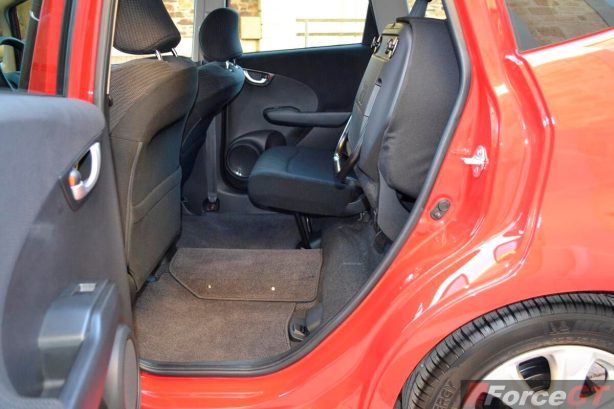 The little Honda comes with versatile multi-folding seats and by stretching the exterior dimensions slightly over its predecessor – 55mm in length, 20mm in width and a 50mm longer wheelbase – there is even more space in its tiny footprint than before.

In what Honda describes as ‘Tall Mode’, the seat rear seat base can be raised into a vertical position against the seat backs, creating a floor to roof space of up to 1280mm that is capable of swallowing two mountain bikes with their front wheels removed.

In ‘Utility Mode’, the Jazz offers a lengthy 1,720mm through load space, thanks to rear seats that fold flat and a fuel tank that resites under the front seats.

Seats up, there’s still a respectable 399 litres of luggage capacity. It’s all incredibly flexible and clever! 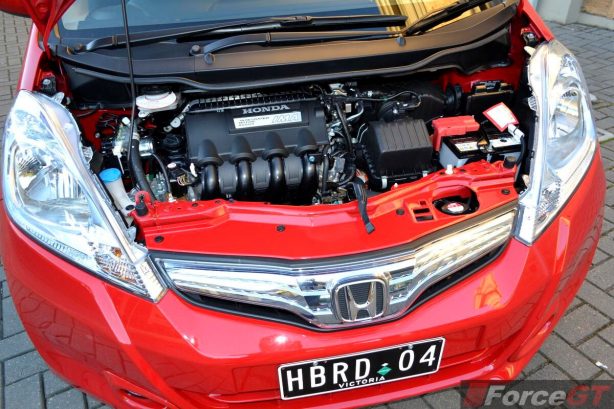 Unlike the hybrids from cross town rival, Toyota, Honda’s ‘mild’ hybrid system won’t travel on electric power alone. The electric motor is merely there to assist the engine or boost power. To further improve efficiency, there is a Variable Cylinder Management (VCM) system that shuts down all four cylinders when only little torque is required – during low speed cruising for example.

While the Jazz Hybrid cops a 70kg weight penalty over its conventionally powered siblings, thanks to the extra hardware, the additional torque more than makes up for it. 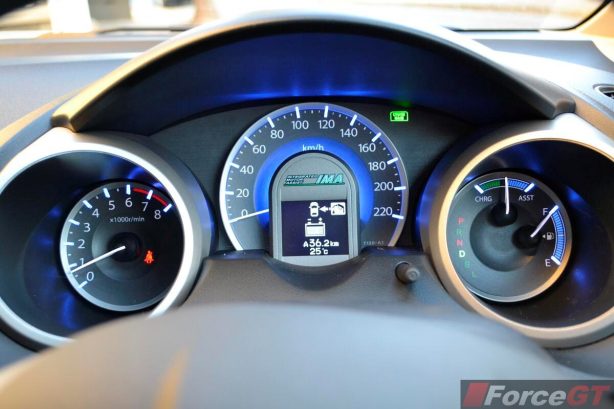 The Jazz’s engine is one of the most impressive aspects of the car. It fires up delicately, with hardly a hint of vibration, and settles into a quiet idle barely louder than the flaps of a butterfly tending to an open bloom in a spring garden. It is similarly quiet when on the move.

However, if getting from A to B reliably without any drama or fuss is not enough for you, then you should probably stop reading now, as you wouldn’t like the next bit.

Where a Volkswagen Polo or a Ford Fiesta is composed and sharp around a bend, the Jazz’s ride compliant comes unescapably at the expense of precision turn-ins and body control. It will run wide at any given opportunity, even in the dry, and body roll is felt on every corner.

Ironically, it is this lower grip threshold that also makes the Jazz kind of ‘fun’. It will screech its tyres without much provocation. You feel like a rally driver just going around the roundabout on the way to see Mrs Jones for a cup of tea!

While noticeable gains have been made with regards to design and materials, the Jazz’s plasticky interior is still below class benchmark. That said, most switch gears feel robust and hard-wearing.

The ECON button is your friend if fuel efficiency is your priority. Pressing the button will reduce power and torque output by four per cent (except when overtaking), reduce fan blower power from the climate control, increase regenerative brake energy and shuts down the air-conditioning during Idle Stop mode.

And because of this, I have avoided the green ECON button like I avoid sleeping on a bed filled with broken glass. The result is an average fuel consumption of 5.9L/100km – 1.4L/100km more 91RON unleaded than what’s printed on Honda’s brochure. 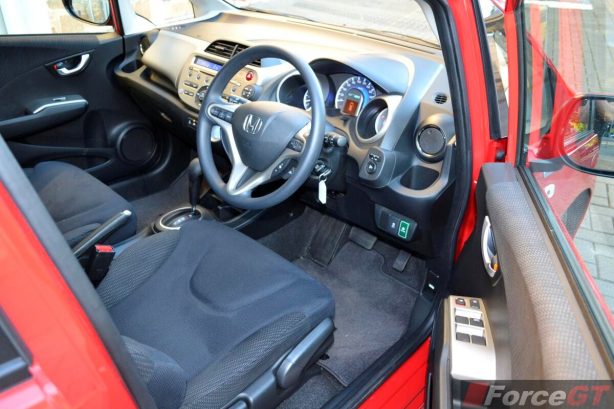 Safety is taken care of by six-airbags, ABS with brake assist and electronic stability control.

The 2013 Honda Jazz continues to deliver reliable, fuss-free motoring that no doubt is a big drawcard to buyers. Its clever ‘magic seats’ and interior space will also be appreciated by those who buy it.

However, at $22,990, the 2013 Jazz Hybrid is encroaching into the class above, with nothing more than a few fewer visits to the fuel pump. You’ll have more fun in a Fiat 500 but the Jazz is justifiably a sensible option.