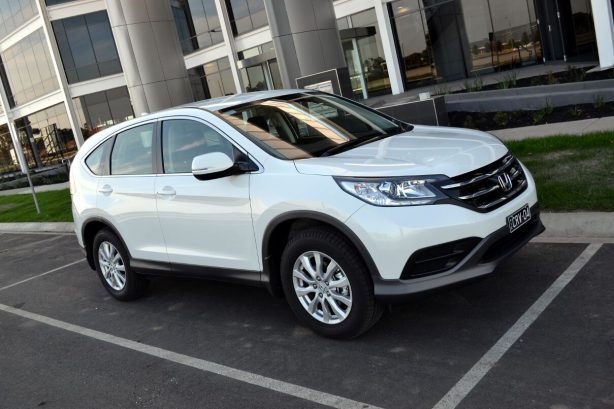 The concept of Compact Sports Utility was first embraced by Honda back in 1995, with the introduction of the original Honda CR-V. Based on a reworked Honda Civic platform, the company’s long running soft-roader has lived a rather humdrum and ordinary life. It has never left a mark on the Honda brand but over the years, matured to be one of Australia’s best selling midsize SUVs.

Now in its fourth generation, the new 2013 Honda CR-V faces its toughest competition ever in one of the fastest growing market segments saturated with a representative from almost every major car manufacturer – Mitsubishi Outlander, Kia Sportage, Ford Kuga, Hyundai ix35, Nissan Dualis, Mazda CX-5, Volkswagen Tiguan and the list goes on…

So it must have been quite a challenge for the engineers at Honda to address some of the old model’s shortcomings to ensure this new one continues to stay at the front of the pack. Let’s see what it has to offer.

Previous generations of CR-Vs have never flourished in the looks department. This time around however, Honda has managed to get the design of the soft-roader right.

Honda’s angular and bolder styling, as seen on the rest of the Honda range, are used to good effect on the new CR-V. The cluttered two-tier front end design of the previous model is now replaced by a cleaner arrangement with a sloped three-bar grille flanked by swept-back headlights, while the new rear end is lifted higher with a raked rear windscreen emphasised by rear lights that mirror the kinked shape of the thick C-pillars. The overall result is a design that is more confident and muscular than the previous CR-V. 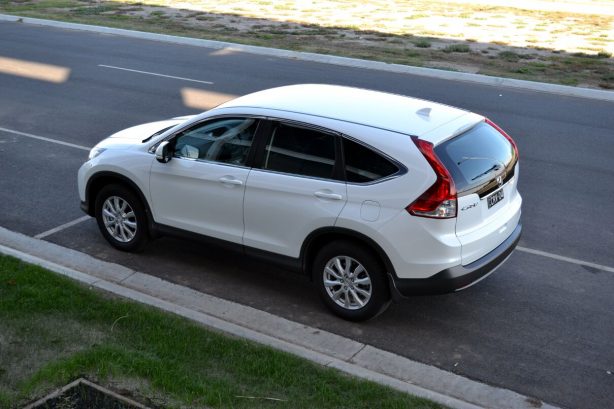 The sharp exterior is complemented by an interior that is a step up both in terms of design and quality. The robust cabin gives preference to function over form with plenty of usable storage compartment throughout, not a bad thing for a car aimed squarely at hauling the family around.

Front occupants will laud the ergonomic layout of all buttons, knobs and switches, as they travel in comfort in the nicely padded seats. Rear passengers will also welcome the addition of rear air-con vents in the new CR-V, a feature still missing in most of its competitors.

While lacking a bit of flair and aesthetic ingenuity, the CR-V’s cabin is a pleasant place to be in.

Despite being 20 mm shorter than the model it replaces, the new CR-V’s cabin space is noticeably bigger with better rear legroom. Getting in and out of the vehicle is a breeze thanks to doors that open to almost 90 degrees.

At the back there is a class-leading 589 litres of boot space. To get more space is super easy, just pop open the tail gate and pull a handle on either side of the boot then stand back and watch as the seat base flops forward, the seat back collapses, and the headrest tucks in all by itself. Very clever. And you now have a massive 1,669 litres of cargo space. 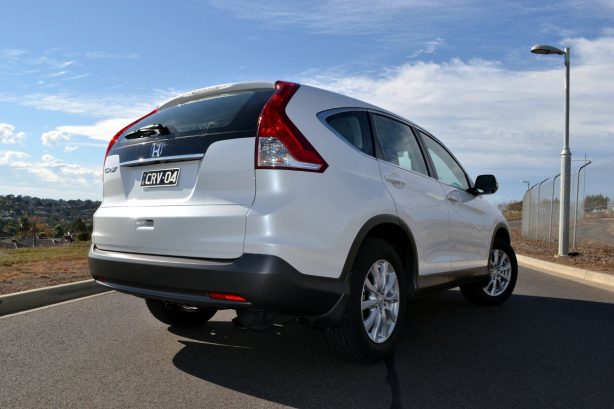 First thing that comes to mind when driving the new CR-V is how smooth and refined the engine and the drivetrain is. Not surprising as refinement and driveability have always been Honda’s forte. The 2.0-litre engine in our test car performs admirably at the task of ploughing through congested city traffic, but also settles down to a quiet hum at steady speeds on long trips to the country. However, if you are planning to hit the gravel or often carry full load then the 2.4-litre 4WD would be the one to opt for.

The 5-speed automatic transmission feels responsive and competent, delivering clean and smooth shifts. However, it does feel a bit outdated considering it is one gear short of the six speed items offered by most competitors these days.

The CR-V’s ride is the most car-like among all soft-roaders, with the emphasis very much on comfort. The soft sprung suspension soaks up most ruts and bumps well. The drawback of that however, is a wobbly feel on uneven road surfaces. It also feels less planted and leans quite dramatically around the bends compared to its rivals.

In sharp contrast, the CR-V’s steering is direct and the brakes are strong and consistent. It also feels very easy to drive around town thanks to an amazingly small turning circle and good all round visibility. 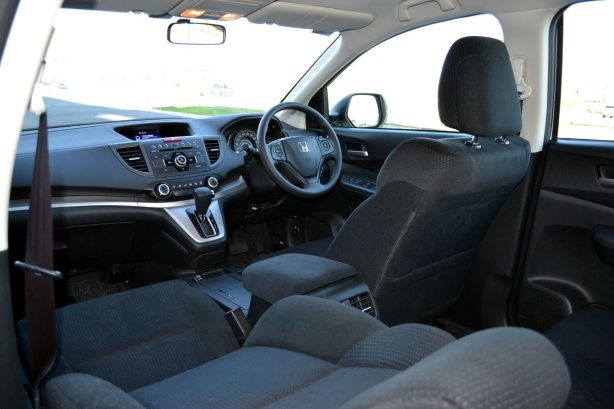 One major improvement in the new model over the previous is cabin insulation. Road and engine noise is now much better suppressed. However there is still slight wind noise, mainly due to its tall body and large door mirrors.

The new CR-V’s overall interior fit and finish is remarkable. Panel gaps are minuscule and well aligned with no noticeable rattles or squeaks around the cabin. The vehicle also feels solidly built and the doors shut with a reassuring thud.

Perhaps the biggest let down is the extensive use of hard plastics throughout the whole interior, although some of the plastics in the upper dashboard do feel of higher grade.

Over our week long test, we covered about 600 kilometres. With about three quarter of the distance spent in city traffic and intermittent use of ECON mode, which is supposedly designed to limit the throttle and increase low-down torque, the 2.0-litre engine in the 2WD Honda CR-V managed to return a reasonable 8.5L/100km. 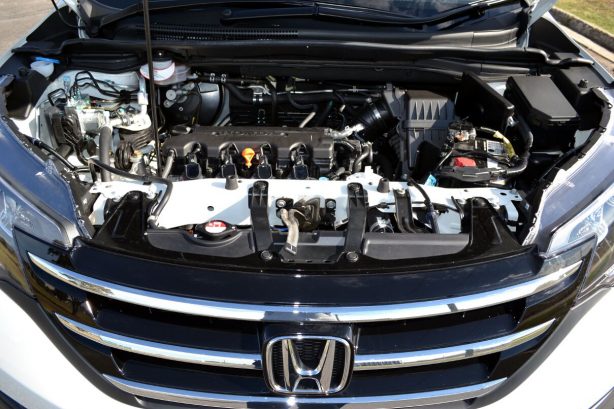 Standard features in the 2WD CR-V VTi include a mediocre 4-speaker audio system – while most competitors are offering 6-speaker system in their base model, speed-sensitive volume compensation, CD player with MP3/WMA playback capability, USB and iPod connectivity, air-conditioning, cruise control and Bluetooth. To its credit, all models get reversing camera as standard.

Like the rest of the Honda range, the CR-V also gets an “Ambient Meter” that surrounds the speedometer. It serves to coach the driver in economical driving techniques by varying the colour depending on how heavy your right foot is.

On the safety front, the CR-V is ANCAP 5 Star rated and equipped with 6 airbags, electronic stability control with antilock braking system and brake assist.

There’s certainly a lot to like about the new 2013 Honda CR-V. It drives competently well, looks attractive and offers plenty of space for a small family in a well engineered and equipped package. The sharp starting price of just $27,490 for the manual VTi also undercuts most of its rivals and makes it value for money.

It is less rugged than most of its rivals and is more of a soft-roader for the road than anything. But you will buy the CR-V for its comfort, practicality, refinement and trouble-free reliability.

However, for a car company with such a fine reputation for innovation and forward-thinking, the lack of a six-speed automatic transmission in place of the outdated five-speeder shows that the motivation to stay ahead of the competition has slowed.