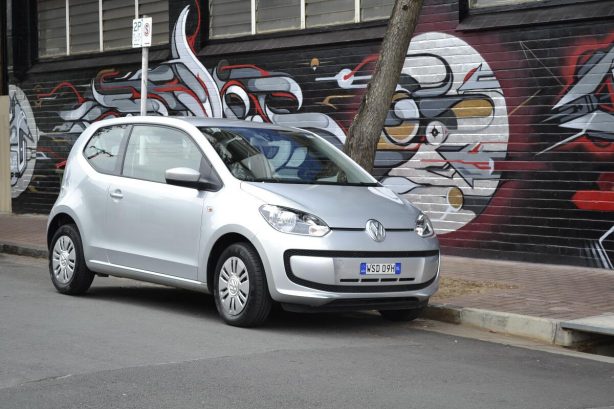 The city car is a relatively new concept in traditionally large car loving Australia. But with increasing pressure from sky-rocketing petrol prices and ever tightening emissions control, the sub-light segment is gradually gaining traction in the local automotive landscape.

The Volkswagen up! is the German brand’s first attempt in this arena. It follows the simple recipe first established by the original Mini – wheels at each corner, short overhangs and a longish wheelbase.

Unlike the original rear-engined, rear-drive up! Concept that premiered at the Frankfurt Motor Show in 2007, the production car is more conventionally laid out – front engine, front-drive. Volkswagen explains that the previous layout would have required significant investment and curtailed the up!’s capability to dip into the company’s vast parts bin, something which the company does exceedingly well.

However, it hasn’t lost any of the concept’s cutesy looks after a protracted period of development. In fact, save for the wing mirrors and a few engineering driven design changes, the overall shape is pretty much unchanged, which is a good thing. 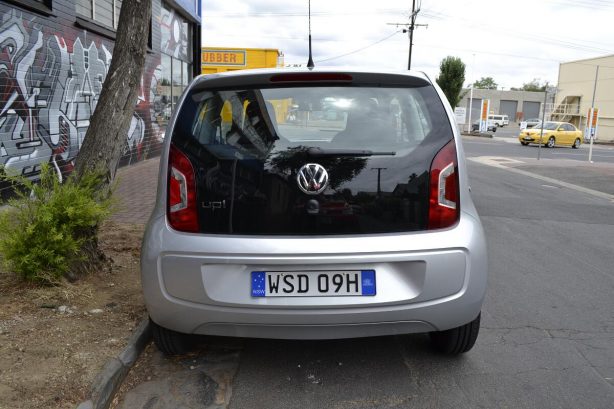 The up! also look decidedly more upmarket than its main rivals, like the Nissan March and Suzuki Alto. From the prominent lines of the front bumper to the flared wheel-arches and distinctive C-pillars, the up! exudes class. At the back, the rear hatch is made entirely of glass and blends seamlessly with the vertical tail-lights.

Inside, the Tardis-like interior showcases Volkswagen’s packaging expertise in squeezing out every last bit of real estate from the up!’s 2,407mm wheelbase.

Although the dashboard isn’t made of the soft plush plastics typical of other Volkswagens, fit and finish is still first rate, especially for its class. The iPad-like portable touchscreen sat-nav device (called maps + more) is perched on the centre of the retro dash, but with extraordinary harmonious success. The car’s driving position is also spot on, even with only height adjustable steering column. 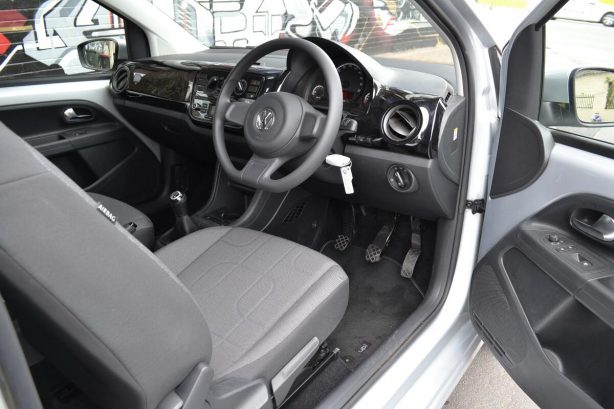 Rear seat accommodation on the 3-door we tested was adequate, even for a pair of 6-footers. There are cup-holders for all four passengers as well – those at the rear cleverly integrated at the base of the seat.

The Volkswagen up! is no hot-hatch. It is designed and engineered with the urban environment in mind. What you get is a refined, responsive and economical city run-about.

The tiny 3-cylinder engine is most vocal when pulling away. Once moving though, the light but responsive steering and smooth shifting gearbox work together to create a fun and nimble city car. 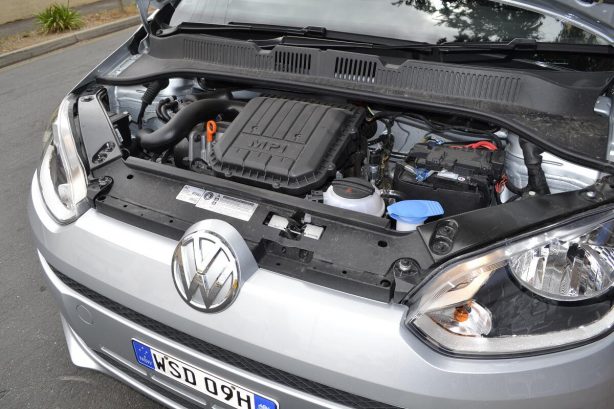 In the urban jungle, the up! rides with big car like comfort, due to its softer suspension tune. On the flip side, it does lean into corners with more roll than bigger VWs. It also has a tendency of bobbing around on quicker ground rather than bedding down.

Australia gets only the more powerful 55kW 1.0-litre engine (European markets also get a 45kW version). It is sufficiently powerful in most driving conditions, except on steep inclines where 1st and 2nd gears are the only way to get the car climbing. Invariably, overtaking anything more accelerative than a bicycle in the up! will also be unwise.

The engine’s natural cylinder imbalance also contributes to a modicum of shiver down the car’s spine. Thankfully, it becomes less noticeable once cruising speed is attained. 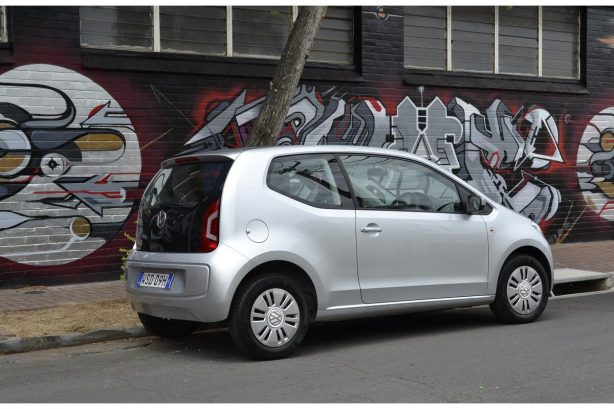 The Slovakian built Volkswagen up! continues the German brand’s tradition of building quality and affordable vehicles for the masses.

For the asking price, it is hard to fault the up! True, signs that the up! was engineered for the budget conscious abound. For example, there is no passenger power window switch on the driver’s side, no roof grabs for the passengers, no cargo area illumination and so on.

But the cabin is solidly hewed with hardly a rattle or squeak.

Volkswagen claims the up! will return a combined fuel consumption of 4.9L/100km. Our test average returned 5.5L/100km of mostly city driving from the car’s 35 litres fuel tank.

Like most European cars, the up! demands premium juice. Service intervals are every 15,000km or 12 months, whichever comes first. 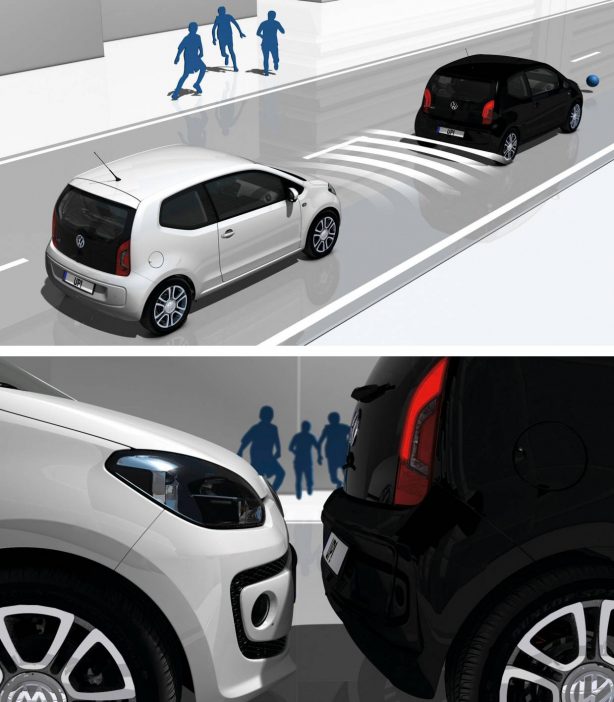 The up!’s headline grabbing feature is its first in the sector City Emergency Braking. It uses a laser sensor mounted on the windscreen to scan a space 10m in front to detect the risk of an imminent collision.

If such a situation is detected and the driver takes no action, the system will automatically apply the brakes hard to stop.

We also highly recommend paying the extra A$500 for the Maps + More portable infotainment device that comes with sat-nav and Bluetooth.

The Volkswagen up! brings maturity and built quality never seen before in the light-car class. Cabin quality is immaculate, from the sporty flat-bottomed steering to the power windows switches.

There is, however, a price to pay and that’s starting from A$13,990. This makes the Volkswagen up! the most expensive of the light-car crop. What you get though, is the heritage of the German badge and almost flawless engineering.

The only glaring omission is the lack of an automatic transmission which Volkswagen says will be available later this year.