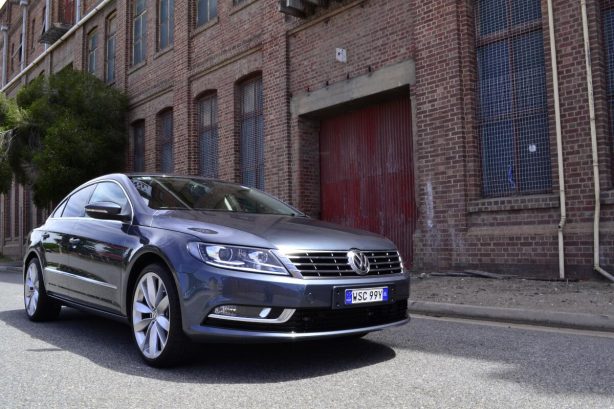 A family sedan used to be a box with four doors and a large boot, and it largely still is…. for most. But for those who refuse to join the sea of bland on our roads and want a stylish and sophisticated package, there’s the latest Volkswagen CC.

There are quite a number of anti-bland people out there as well, because according to Volkswagen, since the Passat CC’s launch in 2009, 320,000 people around the globe have driven one home. The 2012 update sees Volkswagen dropping Passat from its name, while adding an extra seat at the back and more hi-tech equipment – in line with Wolfsburg’s push to position the CC upmarket and as a separate model.

Despite ‘severing’ ties with its less coutured sibling, the CC continues to share its accomplished, if not overly sporty platform.

We recently spent a week with the low-slung four door coupé to answer the main question in most people’s mind: Is the Volkswagen CC really a Passat in an Armani suit?

Read on to find out.

There is no denying that the Volkswagen CC is a handsome and classy looking car. Its unmistakable coupé-like silhouette remains, courtesy of the frameless doors and a sweeping roof line. The elegant simplicity of its design is complemented by the new, more angular look of the front and rear.

At the back, the curvy tail lights of the first generation Passat CC made way for simpler, yet no less dramatic LED designs. This is especially so when the graphics within them light up at night. 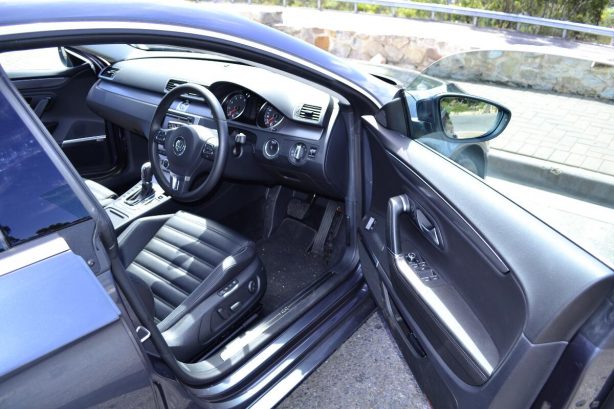 Inside, the roof and pillars are intimate, reinforcing the coupé sensation. However, one can’t help but feel slightly let down by the dashboard that is donated by the cheaper Passat. Don’t get me wrong, the beautifully crafted dashboard is predominantly faultless, with soft touch materials and clear instruments typical of Volkswagen. Likewise, all controls are ergonomically sound with excellent tactile sensation.

What I have issue with is it doesn’t feel bespoke enough for a car with premium aspirations like the CC. Volkswagen could have at least thrown in the chunky and far more expensive looking flat-bottom steering wheel from the Golf GTI.

On a brighter note, the CC uniquely gets a colour Multi-Function Display. Its sports front seats are also wonderfully supportive and comfortable. While the centre rear seat is a welcomed addition, it is only really useful for short distances or smaller passengers.

There is plenty of headroom, both front and back, even for lofty passengers, despite what the roofline might suggest.

We tested the top of the range, V6 FSI and boy, what a gem of an engine it is! It fires up with a low, bassy grumble that turns into a ferocious roar once on the move (not dissimilar to the deep growl of Mufasa from the Lion King, voiced by James Earl Jones).

Mated to Volkswagen’s 6-speed dual-clutch DSG gearbox, the engine’s power delivery is deliciously smooth and linear. Its peak torque of 350Nm arrives at 2,400rpm. Coupled with a Haldex all-wheel drive system, the CC has insatiable grip to match its grunt.

To conserve fuel, only 10 percent of power is sent to the rear wheels under normal driving situation. However, if the front breaks traction, 100 percent of the torque can be directed rearwards. The CC comes standard with Volkswagen’s Dynamic Chassis Control system that continuously adjust the car’s damping and steering feel, dependent on one of the three selected settings – Normal, Comfort and Sport.

I find Sport mode to be most suited to the car as the chassis becomes tauter and steering provides a better feel. Although the CC does not possess hot-hatch like agility, it is surprisingly nimble for a large GT car. Its steering is quick and direct, but not overflowing with feedback.

While the car is discernibly stiffer in Sport without being jarring, Comfort mode on the other hand results in a wafty ride and vague steering feel, best reserve for straight corrugated arterial roads.

Around town, the DSG seemed to be disposed of the low speed jerkiness that plagues other Volkswagen models. Drop it to into S, it will hold gears at higher revs and blips the throttle on downshifts – lovely. As one would come to expect from a Volkswagen, built quality and fit and finish are top notch. The majority of the contact areas are made of soft touch plastics, including the door trims. The superbly comfortable seats are covered in high quality leather, and there is a premium look analogue clock on the dash.

The typically sombre Volkswagen cabin is given a touch of class with a generous application of brushed aluminium trims on the dash and doors. Underfoot, the thick carpet that lines the cabin feels brilliant.

The sat-nav though is a big letdown. While its touch-screen interface is intuitive and easy to use, its map is a few generations behind the best, in terms of graphics and map data.

The downside to the sonorous engine note and a 3.6-litre V6 is fuel consumption. We covered over 600km on test, with 70% city commute. The Volkswagen CC returned 12.3L/100km of premium fuel from its 68 litres fuel tank.

To be fair though, I have been prodding the right pedal fairly hard on every trip. With gentler driving, I have no doubt that it will return the claimed 9.7L/100km stated on Volkswagen’s brochure.

Hmm, where do I start…. the Volkswagen CC is equipped with some hi-tech features usually found in more expensive cars.

The CC also sees the debut of Volkswagen’s automatic boot lid release with Easy Open function. A specific foot motion behind the vehicle is all it takes to open it, if one carries the remote key. Perfect when your hands are full. 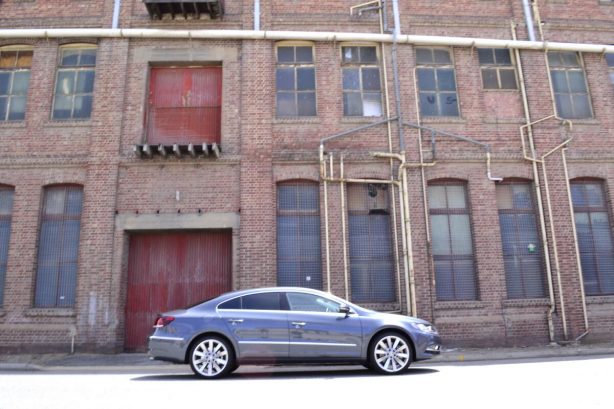 The Driver Assistance Package is consist of Adaptive Cruise Control with Front Assist and City Emergency Brake function, Lane Assist and Side Assist, and is well worth the spend in my opinion, as similar equipment would cost thousands more on an Audi.

So, is the CC worth the extra A$7,200 over a similarly equipped Passat V6 Highline sedan?

If like me, you are instantly induced into the deepest slumber at the sight of a Passat sedan, and you prefer the fitted couture look of an Armani suit over a Peter Shearer special, the CC is worth the extra outlay.

In fact, it’s a bargain if you consider entry into the prestige European four-door coupé starts from A$95,900 for the Audi A5 Sportsback 3.2 Quattro FSI tiptronic, and that’s before you even begin putting a tick next to those irresistible and costly options.

With the savings, you could even park a Volkswagen Polo GTI next to your CC….